The Strategic Issues & International Relations Forum is a venue to discuss issues pertaining to India's security environment, her strategic outlook on global affairs and as well as the effect of international relations in the Indian Subcontinent. We request members to kindly stay within the mandate of this forum and keep their exchanges of views, on a civilised level, however vehemently any disagreement may be felt. All feedback regarding forum usage may be sent to the moderators using the Feedback Form or by clicking the Report Post Icon in any objectionable post for proper action. Please note that the views expressed by the Members and Moderators on these discussion boards are that of the individuals only and do not reflect the official policy or view of the Bharat-Rakshak.com Website. Copyright Violation is strictly prohibited and may result in revocation of your posting rights - please read the FAQ for full details. Users must also abide by the Forum Guidelines at all times.
Post Reply
95 posts

india should aim to capture and squat on Skardu-Gilgit belt and just annex it. will cut off both karakoram highway and the road via Aksai chin forver.

that will take care CPEC.
Top

Long time Rusophile President of Khazakstan quits. What next? Another bout of instability in Central Asia.

With its oil and gas reserves, mineral wealth, borders adjoining key Central Asian states the country had been peaceful under him. No militancy. Wonder what next
Top

Up. need to pay attention to this region.
Top

Fierce fighting between Armenia and Azerbaijan continued for a third day, with a reported 11 soldiers on both sides killed. Both sides also reported the other attacking civilian settlements in what appears to be a widening conflict.

The fighting, which broke out on July 12, is now the deadliest since the “April War” of 2016, when more than 200 on both sides were killed. But that conflict took place on the line of conflict between the Armenian-controlled de facto republic of Nagorno-Karabakh and Azerbaijan proper, where clashes have been more common. The more recent battles have been on the international border between Armenia and Azerbaijan, where there have been occasional exchanges of fire in recent years, but not fighting this serious since the 1990s.

When the ceasefire is violated, suspicion typically falls on Azerbaijan, as Armenia has little to gain from disturbing the status quo: its forces control the territory at the heart of the conflict, Nagorno-Karabakh, as well as several surrounding districts of internationally recognized Azerbaijani territory.

But given that this fighting started on the border with Armenia, not the line of contact with Karabakh, that logic is less applicable: Azerbaijan has less to gain by fighting in Armenia proper.

Indeed, perhaps the most consequential “both sides” statement came from the Russia-led Collective Security Treaty Organization (CSTO), of which Armenia also is a member. Quickly after the fighting broke out, Armenian officials began to publicly call for the CSTO to get involved. “The issue is that this is effectively an attack on a CSTO member state,” Armenia’s ambassador to Moscow, Vardan Toganyan, told Russian radio Govorit Moskva on July 13.

Those speculations have been heightened since 2018, when Armenia’s “Velvet Revolution” brought in a new government including many pro-Western and anti-Russia officials. Moscow’s concerns were exacerbated when the new authorities’ anti-corruption campaign took aim at Yuri Khachaturov, a former senior Armenian military officer who then became the CSTO’s secretary general. All that has raised questions about the extent to which Russia (which pulls the strings in the CSTO) will be interested in sticking its neck out should Armenia need meaningful support.

Armenia and Azerbaijan erupt into fighting over disputed Nagorno-Karabakh https://www.bbc.co.uk/news/world-europe-54314341

Heavy fighting has erupted between Armenia and Azerbaijan over the disputed Nagorno-Karabakh region, with both civilians and combatants killed.
Accusing Azerbaijan of air and artillery attacks, Armenia reported downing helicopters and destroying tanks, and declared martial law.
Azerbaijan said it had begun a counter-offensive in response to shelling.
The region is internationally recognised as part of Azerbaijan but controlled by ethnic Armenians.
They broke away in the dying years of the Soviet Union. Both Armenia and Azerbaijan were part of the communist state, which sought to suppress ethnic and religious differences.
Amid the clashes, Azerbaijani President Ilham Aliyev said he was confident of regaining control over the breakaway region.
Martial law has also been declared in some regions of Azerbaijan.


The conflict in the Caucasus Mountains has remained unresolved for more than three decades, with periodic bouts of fighting. Border clashes in July killed at least 16 people, prompting the largest demonstration for years in the Azerbaijani capital Baku, where there were calls for the region's recapture.
On Sunday, Turkey's President Recep Tayyip Erdogan pledged support for Azerbaijan during the new crisis while Russia, traditionally seen as an ally of Armenia, called for an immediate ceasefire and talks to stabilise the situation.
France, which has a large Armenian community, called for an immediate ceasefire and dialogue, while Iran, which borders both Azerbaijan and Armenia, offered to broker peace talks.
How did the fighting spread?
Armenia's defence ministry said an attack on civilian settlements in Nagorno-Karabakh, including the regional capital Stepanakert, began at 08:10 local time (04:10 GMT) on Sunday.
A woman and child were killed, officials said. The separatist authorities in Nagorno-Karabakh said 16 of their servicemen had died, with 100 injured.
Armenia said it had shot down two helicopters and three drones, as well as destroying three tanks.

Armenia's government declared martial law and total military mobilisation, shortly after a similar announcement by the authorities inside Nagorno-Karabakh.
Martial law is an emergency measure under which the military takes over the authority and functions of the civilian government.

"Get ready to defend our sacred homeland," Armenian Prime Minister Nikol Pashinyan said after accusing Azerbaijan of "pre-planned aggression".
Warning that the region was on the brink of a "large-scale war", and accusing Turkey of "aggressive behaviour", he urged the international community to unite to prevent any further destabilisation.

According to Azerbaijani prosecutors, five members of the same family were killed by Armenian shelling of one village in Azerbaijan.
Azerbaijan's defence ministry confirmed the loss of one helicopter but said the crew had survived, and reported that 12 Armenian air defence systems had been destroyed. It denied other losses reported by Armenia.
President Aliyev said he had ordered a large-scale counter-offensive operation in response to Armenian army attacks.

"As a result of the counter-offensive operation, a number of Azerbaijani residential areas that were under occupation have been liberated," he said in remarks broadcast on television.
"I am confident that our successful counter-offensive operation will put an end to the occupation, to the injustice, to the 30-year-long occupation."
Armenia's defence ministry denied any villages had been lost to Azerbaijan.

Nagorno-Karabakh - key facts
A mountainous region of about 4,400 sq km (1,700 sq miles)
Traditionally inhabited by Christian Armenians and Muslim Turks
In Soviet times, it became an autonomous region within the republic of Azerbaijan
Internationally recognised as part of Azerbaijan, but majority of population is ethnic Armenian
An estimated one million people displaced by 1990s war, and about 30,000 killed
Separatist forces captured some extra territory around the enclave in Azerbaijan in the 1990s war
Stalemate has largely prevailed since a 1994 ceasefire
Russia has traditionally been seen as an ally of the Armenians

President Erdogan called Armenia "the biggest threat to peace and tranquillity in the region".

The Organisation for Security and Co-operation in Europe (OSCE) has long been trying to mediate a settlement of the conflict over Nagorno-Karabakh, with diplomats from France, Russia and the US - making up the OSCE Minsk Group - trying to build on a 1994 ceasefire.
Top

Not to worry for islamists. pukitbots are here.

Pakistani bots on Twitter vow to fight for Muslim majority Azerbaijan after clashes erupt with Armenia over border issue
https://www.opindia.com/2020/09/pakista ... t-armenia/
....
Many social media trolls from Pakistan descended on Twitter to spread their hatred against Armenia.

One Islamist troll from Pakistan, expressing his support to Azerbaijan said Pakistan does not recognize Armenia as a state.
...

Seeing lots of videos of supposedly Azeri TB2 drones destroying Armenian positions/groupings. Looks like the ruskies want to teach the armenians some hard lessons before stepping in

Edit: Added a twitter link. Don't know how much of it is true and how much is turkish/azeri propaganda
Top

This was the case in the initial days of Syrian conflict, tall claims now, but I think Armenia says it has the situation under control. I suspect Azerbaijan will downhill sky after casualties in a few days.
Top

What about the rumours about actual uniformed jihadis present on the ground ?

Pakistani soldiers are allegedly fighting alongside the Azerbaijan troops in Agdam, according to a telephonic conversation between two civilians, posted by Free News.AM.

The first civilian asked if shooting is taking place in another civilian's area.

To which the second civilian replied, "On Agdam's side. They have gathered Pakistani soldiers and have taken them towards Agdam."

Those speculations have been heightened since 2018, when Armenia’s “Velvet Revolution” brought in a new government including many pro-Western and anti-Russia officials. Moscow’s concerns were exacerbated when the new authorities’ anti-corruption campaign took aim at Yuri Khachaturov, a former senior Armenian military officer who then became the CSTO’s secretary general. All that has raised questions about the extent to which Russia (which pulls the strings in the CSTO) will be interested in sticking its neck out should Armenia need meaningful support.

Oops. Now the Armenians are probably wishing they hadn't thrown the Russians out. The US and Israel are backing Azerbaijan, while Turkey is itself backed by NATO, so without the Russians, Armenia has no one to turn to. Nobody's going to help them.

Turkey is turning into quite the regional powerhouse.
Top

Reality could be quite the opposite. Toorkey may be getting its a$$ kicked. All this revival of Ottoman empires glory days is a bunch of cr@p. The current coverage of the conflict could be an exercise in smoke and mirrors.

The conflict has its root in the good ole mideast politics of "oil and gas" -- Baku–Tbilisi–Ceyhan pipeline. Azeris (with Toorkey) may have decided that the Armenian control of Nagorno-Karabakh must be fixed for a long-term security of oil/gas.

Wiki article is fairly detailed and explains why YooS, YeeU, and Israel supports Azeri position. The pipeline is the only pipeline, other than the Rusky pipelines, to transport oil and gas to Europe. All parties, except Ruskies, have incentives to keep it secure and away from conflicts, and minimize dependence on Ruskies. Pipeline has been shutdown in the past due to Kurdish and Georgian crisis on several occasions. Same reasons why Ruskies are entrenched in Seereeya. Two umpires are still deciding most of the energy flows around the world. Very reason, Bakistan is kept alive (among many other reasons) to prevent any energy flow to India from CAR. Fortunately, access to ocean made this irrelevant to India, but I digress. 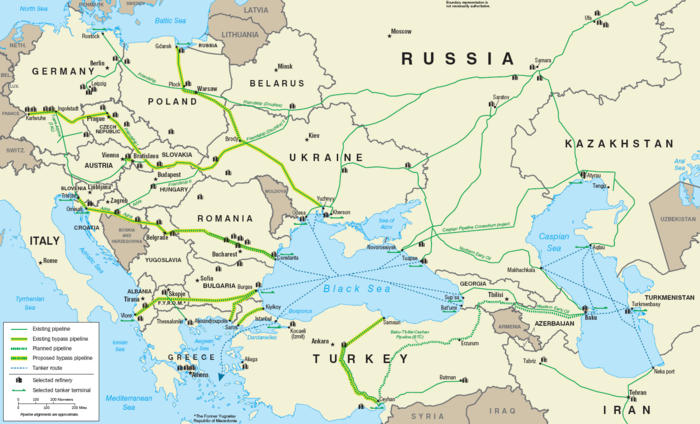 Who? What? Why?
Something unusual about this

interesting that they havent even named that "central asian country". and what our scientists are doing there.
Top

Seems to be this?
India to develop torpedo testing centre in Kyrgyzstan
Top
Post Reply
95 posts