The Strategic Issues & International Relations Forum is a venue to discuss issues pertaining to India's security environment, her strategic outlook on global affairs and as well as the effect of international relations in the Indian Subcontinent. We request members to kindly stay within the mandate of this forum and keep their exchanges of views, on a civilised level, however vehemently any disagreement may be felt. All feedback regarding forum usage may be sent to the moderators using the Feedback Form or by clicking the Report Post Icon in any objectionable post for proper action. Please note that the views expressed by the Members and Moderators on these discussion boards are that of the individuals only and do not reflect the official policy or view of the Bharat-Rakshak.com Website. Copyright Violation is strictly prohibited and may result in revocation of your posting rights - please read the FAQ for full details. Users must also abide by the Forum Guidelines at all times.
Post Reply
3103 posts

what is the difference?
Top

Le Prosecutore De Villefort is just saying that it is "most probably" from MH370 - IOW releasing Le Farte d'Prosecutoriale.

Look at the map and see chance of a lot of debris actually washing ashore on this one island, from a crash thousands of miles away. Negligible. Either the crash was nearby (in which case it was very recent per all the ocean current experts' plots), or the pieces are planted.
Top 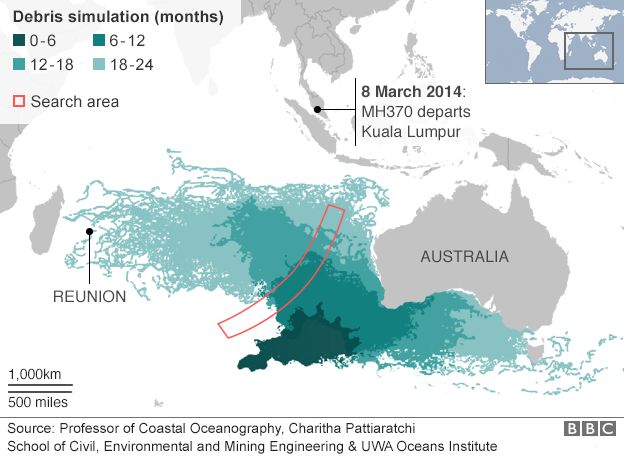 So NOTHING was seen in all the high-density areas, and several pieces are washing ashore at Reunion.. that's what I mean. They just weren't there, and weren't brought all the way by the ocean.

That's the other thing: doesn't the SW Monsoon blow from the Reunion regions TOWARDS India? Aren't these new 'Indian ocean current' simulations , shall v say, 'custom-tailored' to fit the result?
Top

Ultimately they have to find the point of impact, because that is where the black box would be found.

Looking at search quadrant, the implied centre of the circle is a point where the aircraft was known to be travelling (who figured that direction of travel and how).

So
1) Plane takes off from malaysia and travels to point A
2) Point A is the centre of the circle where the plane changes direction and the search quadrant is presumably the point where the fuel would run out for the plane.
3) all the search efforts were directed in that red arc based on the direction of travel of the plane from point A.

But, if you actually draw the circle from this point A and then change assumptions about the direction of the plane to be towards Madgascar, rather than australia, then the search arc would include the reunion island. Seems like a more plausible explanation for the plane parts to show up in Reunion Islands than theories based on ocean currents. If the latter theory has any truth to it, we should see plane parts show up in various shores along that region by now.
Top

The location is because of data from Inmarsat.
They did this based on two observations.

First they measured the time taken from the signal to travel from the plane to the satellite, getting the distance arc.

The north or south arc was determined using doppler shift.
The satellite was old and was not keeping a perfect location, it was travelling in a north-south back and forth arc about its geostationary site. So the Inmarsat walas calculated doppler shift of the signal because the satellite was at that time travelling from north to south. The doppler reads suggested that the plane was moving in the same direction as the satellite.

So the hunt in the southern arc.
Top

UB, the equatorial region is the doldrums. Monsoons do not originate from well south of the equator where Reunion is. But we are talking ocean currents and not atmospheric circulation, no ? There is the coriolis effect which shapes the movement of the current's direction due to the earth's rotation.

Most geostationary sats will do a figure of '8' track about its stationary point, depending on its station keeping, so the doppler shift in freq if measurable can give you direction as mentioned above.
Top

Bade wrote:Most geostationary sats will do a figure of '8' track about its stationary point, depending on its station keeping, so the doppler shift in freq if measurable can give you direction as mentioned above.

Minor nit pick, its the GeoSynchronous sats which does that. Geostationary are stationary sats
Top

The arrival times as color coded in the BBC image linked earlier is not at variance with the assumption of the likely crash site as off Aus coast, unless the debris field had arrived many months in advance at Reunion.

Here is another simulation.

L'Inspecteur Clouseau is pondering.
"BEA investigators helped with the searches on Reunion Island and Maldives but we couldn't find any more debris so we stopped the searches.
"There are strong indications that this flaperon is from MH370, but we are still unsure. We are still missing identification from the parts list in order to fully confirm it is from MH370."
A source close to the investigation told CNN, "What we know so far is that it is for sure from a 777. We know that this is the only 777 that is missing in that specific region.
"We still need to identify a number that is inside the flaperon. It is a Spanish subcontracting company that owns that part. This company would be able to identify this number, but the staff is on vacation. We'll have to wait for next week to get their guidance.
"Judicial experts gave a preliminary report to the Paris prosecutor's in the meantime."
Top

And if u believe that...

Malaysian prime minister Najib Razak decided it was (part of MH370), and on August 5th, he released a statement announcing as much to the world. But minutes later, French investigator Serge Mackowiak countered the prime minister’s remarks, saying that more tests were needed to conclusively determine the wing segment’s origin. Those test results were supposed to come within a day. Then a few days. Now it’s been several weeks.

What’s the hangup? According to New York Magazine, the ID plate that should have been attached to the inboard edge of the flaperon is missing. This plate, affixed to all 777 flaperons, ought to contain a serial number linking the part to MH370. Its absence has not only stymied the investigation, it’s causing other strange facets of the wing segment to come under scrutiny.

For instance, the flaperon was covered in barnacles, sessile marine organisms that survive underwater by affixing themselves to floating objects. Barnacles, New York Magazine reports, seem to suggest the wing segment spent the last several months suspended beneath the surface of the ocean. Which is curious, to say the least:

While it’s easy to imagine a submarine or a scuba diver hovering peacefully 10 or 20 feet under the surface of the water, this is not something that inanimate objects are capable of doing on their own: Either they are more buoyant than water, in which case they float, or they are less buoyant, in which case they sink.

So, how could a six-foot-long chunk of airplane remain suspended beneath the ocean surface for a long period of time? At this point, there aren’t any simple, common-sense answers; the range of possible explanations at this point runs from as-yet-unidentified natural processes to purposeful intervention by conspirators.

There’s certainly a logical explanation for all of this, and we’ll get there eventually — perhaps we’ll even learn a thing or two about barnacle ecology in the process! In the meanwhile, the sleuths of the internet are sure to come up with all sorts of outlandish origin stories for the untagged flaperon. And the fate of flight MH370 remains as mysterious as ever.

Compare MH-370 snafu with this: 3-mile depth is no problem, apparently!

submersible operating almost 3 miles below the ocean's surface, has identified the cargo ship El Faro.. Search crews using sonar over the weekend found wreckage that appeared to resemble a 790-foot cargo ship in an upright position, the NTSB said. The Navy used a special sub, the CURV 21.. A crew on the USNS Apache had been working since Sunday to confirm the wreck's identity. The CURV 21, which is outfitted with a video camera, is also searching for the ship's data recorder. There was no immediate word on that.

Isn't the ship much bigger than the plane, so easier to locate; plus it can't go far from its last known position, unlike a plane?
Top

For instance, the flaperon was covered in barnacles, sessile marine organisms that survive underwater by affixing themselves to floating objects. Barnacles, New York Magazine reports, seem to suggest the wing segment spent the last several months suspended beneath the surface of the ocean. Which is curious, to say the least:

While it’s easy to imagine a submarine or a scuba diver hovering peacefully 10 or 20 feet under the surface of the water, this is not something that inanimate objects are capable of doing on their own: Either they are more buoyant than water, in which case they float, or they are less buoyant, in which case they sink.

So, how could a six-foot-long chunk of airplane remain suspended beneath the ocean surface for a long period of time?

Taking a sanity break for a moment, it could be that the plane wreckage was buried in shallow water, so that the flaperon attached far out on a wing was near the surface. A storm stirred the water enough to break it off, so it floated. After all, it was found around the time that the SW Monsoon had blasted through, hain?
**End Sanity Break****

Which strengthens the CertainTy (CT) that the plane was buried off Diego Garcia, near an island at the south end of the Maldives.
Top

Coincidence or another clue to a conspiracy? Funny how yet another MH flight goes off in the wrong direction! It is as if the aircraft was being remotely controlled.

Whatever happened to the part discovered as from wreckage?
Top

any idea where this thing at ?

supreme pigeon instead of rattling chess board and isis water bottles could atleast prove his usefulness to the world here atleast.
Top

civil airliners fly using a pre-set route on the flight management computer. pre flight, a series of way points is loaded on to the computer based on the airlines route planning and immediately after take-off the aircraft is switched to auto-mode and it flies itself. the fact that the pilot took 8 mins to query it sounds like he was not paying close attention.

the routing could have been erroneously entered by some keyboard jockey back at base prior to uploading or it could have been done deliberately. most likely some dufus doing the data entry made a slight clerical error and the wrong route got uploaded. either way, the pilots should have spotted it immediately and reacted.
Top

A South African teenager has found debris which will be sent to Australia for testing as part of the investigation into the disappearance of a Malaysian Airlines plane two years ago, the South African Civil Aviation Authority (SACAA) said on Friday.

Liam Lotter, 18, told South Africa's East Coast radio he found the piece of debris on a beach in Mozambique while on holiday in December and his family took it back to their home in South Africa.

He said that after a suspected part of Malaysia Airlines flight MH370 was found in Mozambique last week his family made the connection with his find.

That white, meter-long chunk of metal is being tested by officials in Australia, with help from Malaysian authorities and representatives of manufacturer Boeing Co. South African authorities plan to hand over the debris found by Lotter to the same Australian team.