The Strategic Issues & International Relations Forum is a venue to discuss issues pertaining to India's security environment, her strategic outlook on global affairs and as well as the effect of international relations in the Indian Subcontinent. We request members to kindly stay within the mandate of this forum and keep their exchanges of views, on a civilised level, however vehemently any disagreement may be felt. All feedback regarding forum usage may be sent to the moderators using the Feedback Form or by clicking the Report Post Icon in any objectionable post for proper action. Please note that the views expressed by the Members and Moderators on these discussion boards are that of the individuals only and do not reflect the official policy or view of the Bharat-Rakshak.com Website. Copyright Violation is strictly prohibited and may result in revocation of your posting rights - please read the FAQ for full details. Users must also abide by the Forum Guidelines at all times.
Post Reply
709 posts

A general election will be held in nine phases, the longest election in the country's history, from 7 April to 12 May 2014 to constitute the 16th Lok Sabha in India. Voting will take place in all 543 parliamentary constituencies of India to elect Members of Parliament in the Lok Sabha. The result of this election will be declared on 16 May, before the 15th Lok Sabha completes its constitutional mandate on 31 May 2014.

According to the Election Commission of India, the electoral strength in 2014 is 81.45 crores (814.5 million), the largest in the world. There is an increase of 10 crores (100 million) newly eligible voters. This also will be the longest and the costliest general election in the history of the country with the Election Commission of India estimating that the election will cost the exchequer Rs 3,500 crores, excluding the expenses incurred for security and individual political parties. Parties are expected to spend 30,500 crores (about US$5 billion) in the election, according to the Centre for Media Studies. This is three times the amount spent in the previous election and is the world's second highest after the US$7 billion spent on the 2012 U.S. election. Though unelected, incumbent Prime Minister Manmohan Singh is retiring and has ruled himself out as a prime ministerial candidate. Polling officers carrying electronic voting machines are accompanied by security personnel on the eve of elections in Assam on Sunday. Five of the 14 constituencies in the state, along with one constituency in Tripura, will vote today, marking the first phase of the polls to elect the 16th Lok Sabha. 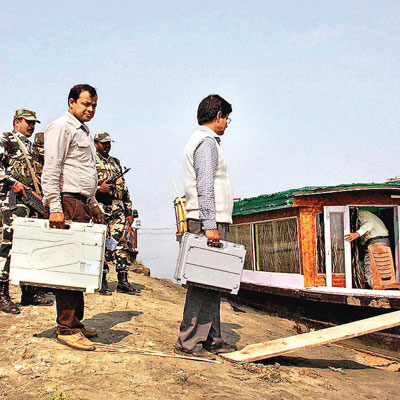 More than 76 lakh voters from six constituencies — five in Assam and one in Tripura — will kick off the country's nine-phase general elections on April 7, as weeks of hectic campaigning came to an end on Saturday evening.

In the first phase, voters in five constituencies in Assam — Lakhimpur, Tezpur, Kaliabor, Jorhat and Dibrugarh — will elect their MPs. A total of 1,221 polling stations will be in operation, out of which 8,588 are hypersensitive and will see a higher deployment of security forces. In Tripura West constituency, state chief electoral officer Ashutosh Jindal said a three-tier security arrangement has been made across the state for peaceful election. The Indo-Bangladesh international border in Tripura has been sealed to prevent any cross-border infiltration during the election process.

The ECI has also categorized 2,710 polling stations as 'critical' as these have a record of polling over 90% votes, with 75% going in favour of one candidate. These stations also have a history of poll-related violence, with a high gap between the number of voters having their photo identity card and the number of absentees.

In Tripura, Jindal said the duration of polling has been extended by an hour, ie from 7am to 5pm. The timings apply across the northeast, except in Manipur and Nagaland.

District officials in Tezpur carrying election materials.
From The Hindu

Steel trunks containing election material are stacked inside a school hall, meant for distribution, in Dibrugarh in Assam.

From Indian Express: A polling official on his way to a booth in Lakhimpur constituency of Assam, Sunday. AP An Indian paramilitary soldier stands guard as poll officials check an electronic voting machine at a polling material distribution center in Agartala, in the north-eastern Indian state of Tripura.

I am going to move this thread to Strat Forum. No political tirades.
Top

People casting their vote in Jorhat in Assam. From NDTV. Vigilant: A security personal keeps vigil from of a strong room from where EVMs are being distributed, on the eve of the first phase of the elections in Lakhimpur district of Assam. Pic/EPA From Mid-Day

From The Hindu
A polling officer pastes a candidate list of Jorhat Lok Sabha constituency at a polling station ahead of the first phase of Lok Sabha elections at Jorhat district of Assam on Sunday. 72% votes in Assam, 74% in Tripura at 5 PM when polls closed with thousands still in line.
Top

"Around 83% of 12.46 lakh voters cast their votes when the last reports were received here at 5 pm The polling percentage may increase after the final reports come here from all four districts," Tripura Chief Electoral Officer Ashutosh Jindal told IANS.

Any pic of elephants and camels transporting election materials ?
Top

Awesome. Scary too, given the level of precautions needed to protect freedom. Sandbags and automatic rifles!
Top

High turnout is helpful to the challenger. In this case Modi.
Top

Manifestos of the major parties/blocs

What happened to Manifestos that IBNLive did NOT present? UBCNews is as always, ahead:

etc? Aren't they ahead of this AAP in seats and constituencies?
Last edited by UlanBatori on 07 Apr 2014 20:21, edited 4 times in total.
Top

I don't c MY favorite party there! Link to presentation about EVM.
Top

Constituency-wise report of Electors in the
Final Rolll-2014 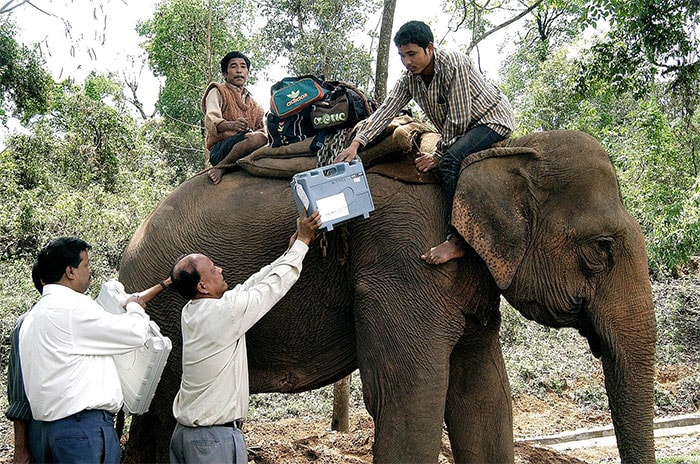 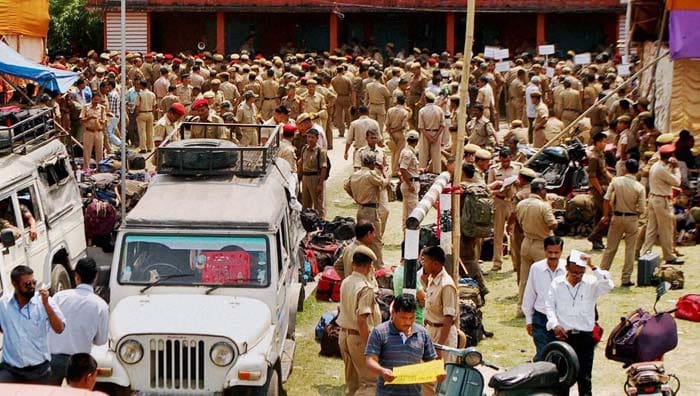 Wonderful idea SwamyG sir, thanks for starting this thread.
Top

How touching! Any pics of yaks carrying voting material, or running the polling booths?
Top

Our elections are being watched by many countries. I haven't seen any cheer about the outcome or prospects of this year's election. After many months of denial and modi bashing, there seems to be a form of acceptance of reality in western countries.

So: the BJP lays down some markers on FDI, India’s nuclear doctrine, and how it would approach its bilateral and multilateral relationships. As a roadmap for what the possible next Indian government might undertake, it thus offers some high-level guideposts, and important areas for external observers to watch closely.

Way too early to count chickens and turkeys.
Top

Ramu wrote: I haven't seen any cheer about the outcome or prospects of this year's election.

That is the extent to which anything that is associated with "Hindu" has been demonized by Congress, Indian communist parties and their allies in Pakistan and the west. If it's Hindu it can't be good.
Top

A security guard protects electronic voting machines in a truck traveling to a polling center before the start of the second phase of voting on April 8 in Senapati.

Even live web streaming of many polling booths!