The Strategic Issues & International Relations Forum is a venue to discuss issues pertaining to India's security environment, her strategic outlook on global affairs and as well as the effect of international relations in the Indian Subcontinent. We request members to kindly stay within the mandate of this forum and keep their exchanges of views, on a civilised level, however vehemently any disagreement may be felt. All feedback regarding forum usage may be sent to the moderators using the Feedback Form or by clicking the Report Post Icon in any objectionable post for proper action. Please note that the views expressed by the Members and Moderators on these discussion boards are that of the individuals only and do not reflect the official policy or view of the Bharat-Rakshak.com Website. Copyright Violation is strictly prohibited and may result in revocation of your posting rights - please read the FAQ for full details. Users must also abide by the Forum Guidelines at all times.
Post Reply
4798 posts

Its very important that our guys catch at least one of these pigs alive.
Top

I don't have access to new channels right now. Is it confirmed that NSG is already on the scene?
Top

10.05 am: Security forces have not been able to establish contact with the terrorists. There are contradictory figures about the number of terrorists. Sources however say that it is confirmed that there are four terrorists inside the police station. The terrorists continue to fire and appear to have a lot of ammunition on them. They have not made any demand

schinnas wrote:The semantics of "persuation" matter here. the debate in BRF is not on whether Memon is guilty or whether he deserves the punishment. I doubt there is any second guessing on that aspect. However, if a solemn promise is made by officials representing India, it needs to be honored.

There is more to this. For one, did the GoI formally endorse any intelligence agencies to make promises to Yakub Memon and induce him to surrender? If such endorsement cannot be proven, then how can GoI be blamed for any actions taken by the police or intelligence agencies? An intelligence officer may have given some promise, but how can that be automatically tagged as assurance from GoI? And for all you know, Yakub Memon may have been influenced by a person, who may not be an Intelligence Agency official, but a double agent or a small time goon who may have been working on the side for the intelligence agencies. If this fellow's death sentence gets commuted on any grounds, rest assured that no terrorist (or criminals from any minority religion in India) is every going to see the hang man's noose.

Singha wrote:either its babbar khalsa being reactivated or a guest crew from cashmere trying to stir the pot.

How far is Gurudaspur from the Kashmir border areas? The terrorists if they entered through Kashmir, would have to also cross Jammu to reach the plains of the Punjab? But I feel this attack may be connected to the Yakub Memon hanging. I was always having a feeling that Dawood and that "Tiger" rascal would try some thing dirty. Perhaps no major attacks, but some thing to show their depseration and the fact that they are still trouble makers. I was also hoping that right after the death warrant was issued, the agencies may have started monitoring the communication channels to pick up any "chatter".

As per NDTV report, six people including two police men have been killed. The terrorists are holed up in the police station building. That makes it also a bit more riskier as the terrorists can also use the arms inside the station armoury. As per the reports 5 live bombs have also been found near the railway tracks in the area.
Top

But, reports are saying that the entire police force within the police station might have been martyred. That would be very, very sad.
Top

gurdaspur is 5km from the international border on the main NH to pathankot, jammu and srinagar.

despite being a muslimish area, the partition map maker radcliffe sahib left that place to us, which gave us a road to rush reinforcements to save srinagar in 1948.
Top

But, reports are saying that the entire police force within the police station might have been martyred. That would be very, very sad.

10:09 am: According to intelligence agencies, the terrorists could not enter J&K in view of multi-tier tight security involving police, para military and Army due to the ongoing Amarnath yatra, PM Narendra Modi’s visit and the upcoming Independence Day celebrations. - See more at: http://indianexpress.com/article/india/ ... egi8d.dpuf

10.10 am: Six persons are confirmed dead in the attack. The army has taken charge of the operation. IB officials suspect that attack could be joint operation by Kashmir and Khalistan terrorists.

10.20 am: Each militant has 150 rounds of AK-47 ammunition on them. Grenades not ruled out. Meanwhile, the security forces have been told to do their best to capture the terrorists alive.

I'm guessing that this attack was intended for J&K but the terrorists could not make it there.
Top

10.35 am: Intelligence Bureau says that attack appears to be handiwork of a pro-Khalistan militant group. The terrorists are holed up in a house. Firing has stopped temporarily

10: 33 am: News just coming in that there has been yet another casualty in the terror attack. The death toll has now risen to 6. - See more at: http://indianexpress.com/article/india/ ... fQFOQ.dpuf

10.37 am: One terrorist has been killed. Four more are remaining. Intelligence Bureau officials confirm that the terrorists slipped into India from Pakistan late last night. The suspicion is that they came from the Narowal area of Pakistan

JUST IN on Punjab terror attack: Intelligence Bureau says the terrorists came from Narowal in Pakistan

Narowal is in Pakjab.
Top

10.44 am: IB alert was general ahead of Kargil day. No specific alerts were issued. Gurdaspur was not on radar since 1990 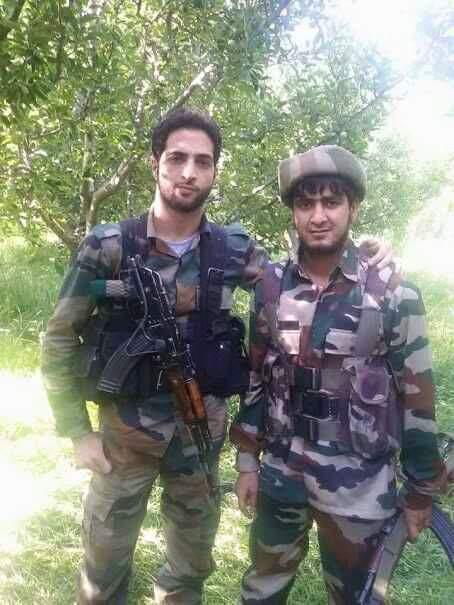 Paul who are they?
Top

Very interesting if Khalistan groups are now being unleashed on Punjab. The Khalistan movement has picked up quite a bit in California. PA is extremely smart in racking this up now. With BJP usurping more of the hindu vote, jihadi groups and ISIS spreading their tentacles in Kashmir, Kerala, Assam, WB, etc., opening up a new front in Punjab would give them additional leverage. Modi has to turn the heat up in Balochistan and Sindh.
Top

The perps per twitter(too early to say IMO). Recall the pictures in FB of terrorists in IA uniform. A hint of what was going to happen.
Top

11.00 am:The terrorists are said to have crossed over from Pakistan into India through the Hiranagar border in Jammu. Hiraganar is around 90 kilometres from Gurdaspur 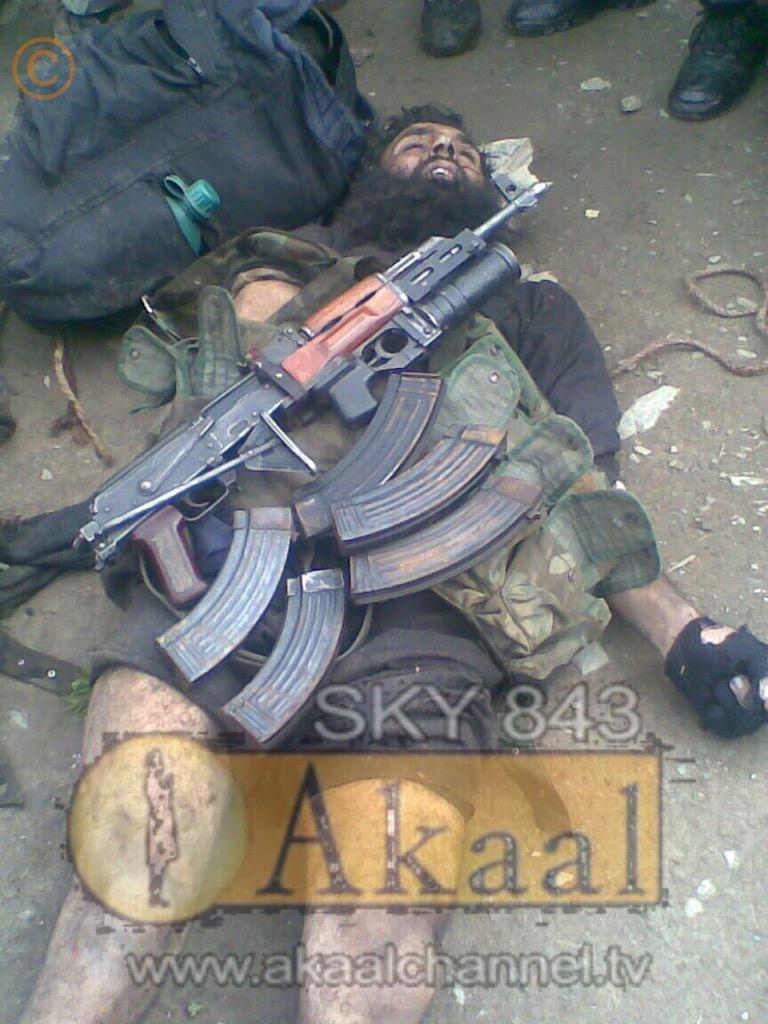 The boy in the left is Burhan Wani the new poster boy of HM in the valley...
Top

Gurdaspur district is one area in Punjab that has a Hindu majority. Vinod Khanna is the MP from there. It has always been a target for Khalistani terrorists in the past.
Top

Samudragupta wrote:The boy in the left is Burhan Wani the new poster boy of HM in the valley...

Killed his brother in April.
Top

The situation right now is very 26/11-esq. No clear information on number of pigs, Hostage-No hostage...hope the chaos is controlled this time around & media is told silently to FO!
Top

Lt.Gen. Brar of Operation Bluestar was mentioning that Gurdaspur was always a sensitive area and the state govt. has been going soft on separatists and was planning release few of them as a measure of goodwill. Its time they need to re-look at the strategy.

While watching the various TV reports, it seems that the feed has been regulated and the atleast english channels have been showing the same visuals. Nidhi Razdan was specifically alerting the reporters and mentioning that they do not want to give out any sensitive info.

Everyone agrees that the terrorists came from J&K. One of the possible targets was the Amarnath Yatris who use the same route. One of the buses attacked was going to Jammu. Govt. isnt giving any info as the operation is still on going, insisting that the details will be made available once its over. the behavior of the reporters is disgusting, they are falling over each other while shooting questions on the Ministers (Home, Defence).

There is an ad by the Delhi govt coming in TV with AK's voice and a candle pleading the PM to handover the Delhi Police to the state govt.
Top

2 terrorists killed. One of the early objectives was to catch them live.
Top IED planted by terrorists at a rail track near Pathankot.
Top

There are reports of a female terrorist being in the group also why Punjab and why now? Start of two state terrorism? The plan looks like to avoid 26/11 for time being and keep testing the red line of the Modi Govt.. Looks like start of a cycle of violence..

SP (Detective) one of the three SP in Gurdaspur attained martyrdom during gun fight with pigs.. R.I.P brave son of India. May you get Moksh.

generally in such ops its best for senior officials who are no longer gun-fit to don normal uniform and not present high value propaganda targets to terrorist snipers who may be specifically briefed to shoot officers just as IPKF faced that problem.

its time to be cautious and bring to bear heavy firepower if its confirmed no hostages are held. bring in some bulldozers and a tank and pound the pigs. bury them wrapped in a fresh pig skin with full 21 gun salute on tv. pathankot would certainly have some tanks....
Top

actually pakees were trending khalistan of twitter for 2 or 3 days ...it is about time an independent balochistan joins the UN...
Top

they are testing with such pin pricks on whether our capability to hit back is intact. They have these operations in Waziristan going on you see. They need to test whether it is working. It is not necessary to respond at every move of theirs but just when they get complacent getting into an easy pattern just whack them senseless and hit a six out of the park.
Top

I have a feeling a few pigs have managed to go loose and authorities are desperately conducting a manhunt for them. Until they are found and neutralised, the situation is not under control. Curfew in Gurudaspur and media black out are certainly necessary steps to avoid panic. I hope they manage to get things under control. The last thing we want is one of the pigs holing up in some Gurudwara. That will be a master stroke by ISI.
Top

gakakkad wrote:actually pakees were trending khalistan of twitter for 2 or 3 days ...it is about time an independent balochistan joins the UN...

Kalistan is meaningless unless the traditional areas of Sikhs of Lahore and Nakana Sahib is obtained for them. I think it is a legitimate demand that borders of Kalistan start 20kms west of Amritsar. It should consist of 60,000 sq km and those who don't eat Jatka meat must immediately leave this land.
Top

Hmm.. some how I get a feeling that this fellow would get a last minute reprieve

Justice Joseph who was in hima chal before?
Top

I hate hackneyed statements like, we will give a befitting reply from Rajnath Singh. He should Just do it.
Top
Post Reply
4798 posts