The Strategic Issues & International Relations Forum is a venue to discuss issues pertaining to India's security environment, her strategic outlook on global affairs and as well as the effect of international relations in the Indian Subcontinent. We request members to kindly stay within the mandate of this forum and keep their exchanges of views, on a civilised level, however vehemently any disagreement may be felt. All feedback regarding forum usage may be sent to the moderators using the Feedback Form or by clicking the Report Post Icon in any objectionable post for proper action. Please note that the views expressed by the Members and Moderators on these discussion boards are that of the individuals only and do not reflect the official policy or view of the Bharat-Rakshak.com Website. Copyright Violation is strictly prohibited and may result in revocation of your posting rights - please read the FAQ for full details. Users must also abide by the Forum Guidelines at all times.
Post Reply
1847 posts

Filmmaker Jamshed Mahmood, who in October came forward with the accusation that he was raped by a “media tycoon” 13 years ago, has named Dawn CEO Hameed Haroon as his alleged rapist.

RCase wrote:http://www.dawn.com/news/1514508/pr-officials-negligence-caused-inferno?previewSerious administrative, operational and security lapses led to Thursday’s Tezgam train inferno, as the officials who were supposed to take measures to avert such accidents apparently showed sheer negligence in performing their duties, ignoring the relevant laws or the standard operating procedures (SOPs).

, “no passenger/person is allowed to take with him/her, or to require railway admin to carry, any dangerous or offensive goods in trains, stations, offices etc”. Similarly, as per article 6.5 of the coaching tariff (II), “explosives, dangerous and inflammable things cannot be booked”.

Hanji, I am conphused... they were onlee carrying stoves and not IEDs, raakits, sooside vests, bums and item bums etc. Only those would be considered eggsblosives, dangeris and infamousable. How can there be Railway Act 1890? Bakistan was formed in 1947 by the grace of Djinnah. Beople should stop using railway and go back to using horsej, like they did in Arabistan during taym of profit.

Sir Ji, this an old Terroristani Habit not only on Trains but also on PIA Flights as per following :

What happened after cabin fire? Following three possibilities come to my mind:

1) Fire spread through cabin rapidly and probably on its way to the cockpit area it ignited a number of more kerosene stoves carried on-board by pilgrims. The fire entered cockpit and incapacitated/disabled cockpit crew. Probably after that the aircraft went into steep dive and due to amount of force on its structure already weakened by intense fire caused aircraft to disintegrate in the air or probably the amount of fire heat in cabin or cargo hold caused fuel tanks to explode that disintegrated the aircraft. Because of disintegration of the aircraft in the air, the wreckage was spread over wide area.

The PR Fire occureded on a PIA (Take your pick "Please Inform Allah and/or Prayers in Air and/or Perhaps I Arrive) Aircraft Crash in Saudi Arabia with Haj Passengers on Board! 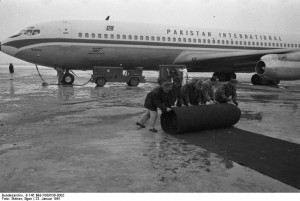 PIA Flight PK740 was a Boeing 707-340C that crashed just after takeoff from Jeddah International Airport in Saudi Arabia on November 26, 1979. The flight was designated to land in Karachi. The flight had 145 passengers and 11 crewmembers, all of whom were killed aboard. The cause for the crash was the plane’s cabin catching fire, the reason of which is still undetermined. Most probable reason for this is a leakage of gasoline or kerosene stove carried by some Haj pilgrim passengers. The type of crash is classified as in-flight fire.

happy dins are here again Filmmaker Jamshed Mahmood, who in October came forward with the accusation that he was raped by a “media tycoon” 13 years ago, has named Dawn CEO Hameed Haroon as his alleged rapist.

Typical Terroristani! They usually "Enter by the Rear Entrance"! Our own brass has little to be proud of – having lost every conflict they have been involved in. After each defeat, they have blamed politicians for their multiple failings, while ignoring the most basic tactical and strategic missteps. For example, take the launch of an armoured strike by our newly acquired Patton tanks near Sialkot during the 1965 war. The Indians simply cut the canals in the area, thereby flooding the battlefield and causing our tanks to get completely stuck. You could almost hear our generals grumbling that this tactic wasn’t very sporting of the Indians.