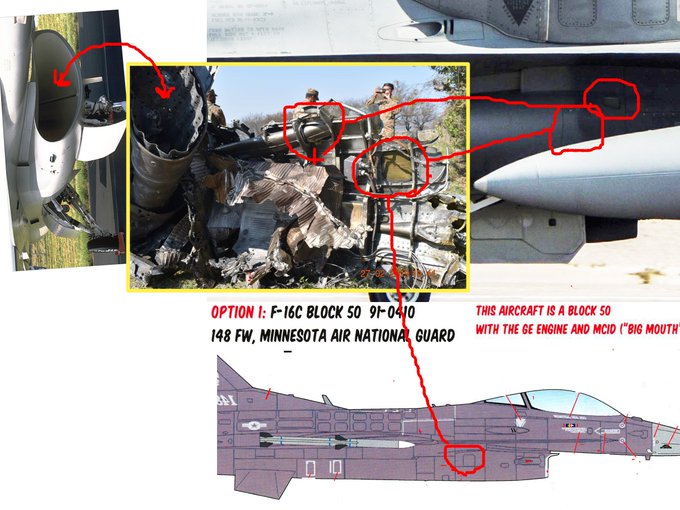 this is completely wrong its not the F16 - its our Mig21. the wreckage has that curvy edged round thing thats the back of the engine, not the bigmouth. the sine wave thing is the flame stabilizer at core of tumansky R25 engine

see both wrecks fell in same area. pics all got mixed. the pic with officer on phone is the F16 engine case, the pic with guy taking cellphone pic is our Mig21

Yes GD, that tweet was wrong and probably unnecessary. But twitter is a battleground now with both sides filling it with outrageous claims and counterclaims. Obviously, you, me, Austin, Tsarkar and the rest of the old guard at BR know what is what.

But since it is already out there, we might as well not make it easy for the pakis to rebut. This one might be egregious enough that even a dimwit of a paki could pick up. But there might be others that are more subtle. We don’t want to do the pakis’ work for them.

some 10 foreign consulates called to ministry and briefed on the situation about 45 mins ago.
Top

Singha wrote:some 10 foreign consulates called to ministry and briefed on the situation about 45 mins ago.

Get ready for a big one. I think it is a courtesy call before the storm.
Top

From Twitter? Not seeing this news anywhere else.
Top

TOI update -IT ministry directs YouTube to remove 11 video links of Wing Commander Abhinandan Varthaman, who was captured by Pakistan during an air combat: PTI
Top

Pipeline is included in cpec.

Where? I haven't heard of any pipeline being built.

there are 2 pipe lines.. one for gas and one for oil.. just a cursery search in google gave me this link for oil pipe line.. I heard about oil one in a seminar in turkey in 2016..

Pakis are saying they are releasing Wing COmmander tomorrow, I am sure they will try some stunt inbetween
Top

JTull wrote:India Today TV just confirmed! To be released at 6am tomorrow

A guesture of good will from them? Pakis must be scared stiff. lol
Top

Aditya_V wrote:Regardign CPEC pipeline, to lift oil up, to have seperate heating to ensure pipes dont fracture, would need a seperate Energy grid worth many billions of Dollars.

isn't that why so many coal based power plants are being built by the cheeni??

They need the heating to keep the oil at a temperature that is conducive to pumping.
Top

Good news of the release, but were they preempting 5 PM conf? Were we planning for something and now they have preempted us? Will never know I guess.
Top

Exactly, a clever move to preempt the 5pm press conference. Lots of brown shalwaring taking place in Pindi because of the silence from India (which everyone including people here aren't happy with).
Top

Let's not forget they tried to attack military installations, it's a clear case of escalation from their side, something that shouldn't be let off.
Top

If true, there has to be a price that is being paid for this.

the pressure will be eased elsewhere or some economic concessions will be made somewhere maybe afghanistan??
Top

This certainly gives the public impression of going down the so called escalation ladder.... nevertheless good news for the near and dear of wco.
Top

JTull wrote:India Today TV just confirmed! To be released at 6am tomorrow

A guesture of good will from them? Pakis must be scared stiff. lol

My guess... we would have threatened to release detailed footage of the Balakot raid publicly if the WingCo was not released immediately. They would have figured it more important that the Balakot footage not released.
Last edited by Dumal on 28 Feb 2019 17:08, edited 1 time in total.
Top

It's definitely a attempt to preempt the press conference at 5pm.
Top

the news conf at 5PM may itself have been announced with a open agenda to put pressure. and then cabinet meet at 6.30pm
Top

This is what Trump was talking about. De-escalation imminent.

A bit anti-climatic, but it allows GOI to walk away with a win at the end.
Top

Pakistan PM Imran Khan inside Pak National Assembly says Wing Commander Abhinandan would be handed over to India tomorrow as a ‘peace gesture’. Sources say it would be made into a big media spectacle at Wagah border to show international community. Everyone forgets Jaish?

Remember the stunts they pulled with Cmdr Jadhav's family's visit?

Let's hope the Modi govt does not climbdown like previous ones.
Top

wagah handover is ok but all indian public and media must be banned from it.
infact we need to insist he be handed to red cross at some neutral place
Top

Yes, red cross without the spectacle. Parading him out is in any case a violation of the Geneva convention.
Top

A welcome and expected step. They had to release WingCo Abhinandan and tried to pre-empt the 5PM conference.

Some serious ball-crunching must have been done behind the scenes to get them to do it. Most probably by Indians but there might've been some support by Americans as well since Doval talked to Mike Pompeo a while ago and Trump was expecting it too.
Top

Bloody hell!!!... we have a piece of the amraam which took out the bison. Unkil needs to be told no defense buys till they take them back.
Top

wasn't there supposed to be tri service press brief at 5pm?
Top

The only acceptable de-escalation gesture is for the Pakis to give us the heads of Hafiz Sayeed, Masood Azar and Dawood on a platter. Then we can think about cooling down.
Top

Lets wait for the W.C. to return. Then start the our next move.

This does not bode well.
Top

Also, Pakis probably buying time till tomorrow for more shenanigans and preparations given the timing of his release.
Top