Sir, many happy returns from a grateful Indian.

Legendary military figure Field Marshal S H F J Manekshaw, the master strategist who fashioned India's victory over Pakistan in the 1971 war, turned 90 today. Manekshaw is in the Capital and is being felicitated by the Indian Armed forces on the occasion of his birthday. "I am delighted to be here and to see all the Generals many of whom were once my students," said Manekshaw at a birthday eve dinner organised by Chief of Army Staff N C Vij last night. Sam Hormusji Framji Jamshedji Manekshaw, popularly known as Sam Bahadur, was the first Indian Commissioned officer to become the Army Chief in 1969 unlike his predecessors who were all Sandhurst trained officers and known as King's Commissioned Indian officers.

He was made India's first Field Marshal in 1973 after 40 years of service and the only Army General to have this five-star honour so far. An Infantry officer, he received the Padma Bhushan in 1968. Mankeshaw, known for his outstanding professional ability, was the architect of the 13-day war in December 1971 that broke up Pakistan and led to the creation of Bangladesh. The Field Marshal, who truly loved soldiering and inspired troops to keep going even in the most difficult situations, was born in Amritsar on April 3, 1914. He was the fifth child of a family of four brothers and two sisters.
Top

Sethaaush man bhava.. ( more of a prayer than blessing as he is elder to us)

Wonderful article. I will add it in the BR Army site.
Top

And he's turning 89, please change the banner. I heard him speak as chief guest at my brothers' school. Was only 15 at the time, but it was love at first sight. What an amazing person.
Top

There is an interesting and historic part played by the Field Marshal in the accession of J&K to India. He (then a Colonel) accompanied V.P.Menon to get the Instrument signed by Maharaja Hari Singh. His statement calls the bluff of TSP propaganda that the instrument was signed after the Indian army entered J&K, that is, after Oct 26.
Top

His mastery of detail was fantastic and, as I was to learn later, he could quote an answer given verbally or in writing months previously to correct someone who was saying something else. A battalion employed in the Mizo Hills, paying perhaps a little more attention to the welfare of its troops and, in the process, a little less than desirable to the operational side received a rude reminder that 'someone up there' was watching, very keenly, every move that was made. A parcel of bangles was delivered to the commanding officer with the compliments of the army commander with a cryptic note: 'If you are avoiding contact with the hostile give these to your men to wear.” Needless to say, the next few weeks saw a flurry of activity by this battalion resulting in another, more soothing message: 'send the bangles back.'

Happy Birthday to a great man. I would strongly recommend listening to a recording of one of his speeches if you can. It's a pity that they are not more widely available.
Top

Very few get a chance to write history. You are one of them. May you complete a century, Sir !

I recall reading that he told Mrs Gandhi (when she asked him casually but in a point blank manner if he was planning a take over), "Madam, my nose may be longer than yours, but I know to keep out of other people's business"
Top

My best wishes to one of the greatest figures of our - and all - time.

Here is another great article on FM Sam ji.
http://www.rediff.com/news/2003/apr/03sam1.htm 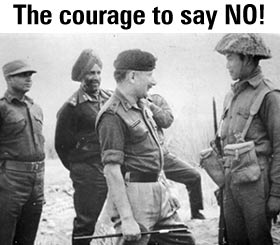 From the rediff article:

HAPPY BIRTHDAY to a great soldier and the FM !!!

Another link from Rediff -> Sam Bahadur

I have had the honor to salute to this hero once in my life, and I still relish that moment. A very happy birthday to the Bahadur.
Top

When Indira Gandhi asked the FM whether he was planning to topple her thru' a coup. And a naughty answer from him. This link also talks about a biographical film of Sam Bahadur.
Top

Best Wishes to the General Saheb

Here is a tune by the Army Band to honour the 1971 Hero.
Sam Bahadur - by LB Gurung
Top

Despite his age, Manekshaw did not disappoint Delhi on this visit. On Wednesday, at the Battle Honours Mess, he was at his witty best as he quipped, "Officers, you have kept up the great tradition of the India Army... [pause] of having beautiful wives."

When the wife of a former army chief asked Manekshaw how he managed to remember the first names of most army wives, the field marshal remarked there are two things no honourable man should forget: His wife's birthday and the first name of the women around.

(recall the {Spinster}advice to a NDA aspirant , Humor in all occasions is the best way to forge ahead in any column)
Top

Originally posted by A.Ananth:
From the rediff article:

I think your facts about India not winning any wars in 2300 yrs are not correct. Shivaji defeated the mughals, tipu sultan defeated the British atleast twice...here is a timeline of important victories..

360 AD
Samudragupta conquers the North and most of the Deccan

A documentary film on the life and times of one of India's most illustrious military commanders has been screened in the Indian capital, Delhi.


Field Marshal Sam Manekshaw, who has just turned 90, played a decisive role in some of India's most significant wars.

They include the war with China in 1962 and India's victory over Pakistan in 1971, which made him a national hero.

The 45-minute documentary film, In war and Peace: The Life of Field Marshal Manekshaw, is a recollection by the field marshal of several redefining moments in India's history.

It is based on a narration by Field Marshal Manekshaw to his 27-year-old grandson.

"What makes the film more interesting is the informal and relaxed conversation between the two people," the film's director, Jessica Gupta, told the BBC

"It does not seem like an attempt to teach history. His sense of humour, his chivalry all strike you and you feel you are in the presence of a hero."

The film is full of anecdotes.