All threads that are locked or marked for deletion will be moved to this forum. The topics will be cleared from this archive on the 1st and 16th of each month.
Post Reply
3967 posts

The integration of the rocket and the satellites has been completed. Heat shield has been closed, first round of tests completed. The countdown begins on Oct 10th 0900 hrs. Lift off is on Oct 12th @ 1100 hrs.
Last edited by SwamyG on 08 Oct 2011 03:21, edited 1 time in total.
Top

SwamyG wrote:The integration of the rocket and the satellites has been completed. Heat shield has been close, first round of tests completed. The countdown begins on Oct 10th 0900 hrs. Lift off is on Oct 12th @ 1100 hrs.

All the Best to ISRO.. It would indeed be a great achievement to launch such a huge satellite using PSLV.
Top

SwamyG wrote:The integration of the rocket and the satellites has been completed. Heat shield has been close, first round of tests completed. The countdown begins on Oct 10th 0900 hrs. Lift off is on Oct 12th @ 1100 hrs.

All the Best to ISRO.. It would indeed be a great achievement to launch such a huge satellite using PSLV.

What's very noteworthy is the appreciably higher than usual orbit of this satellite. We usually see orbits of anywhere between about 570km to 820km for the polar launch. Megatrophique is up at 870km. Yes, all the best!
Top

S^3, Can any ISRO assets look at the A V launch to get calibration of their sensors like IR cameras? What is the resolution of the IR camera (long wave IR) for the latest INSAT multi-purpose sats?
Top

SSridhar wrote:I hope the new spaceport is to the south of Sriharikota. It will also have to be on the east coast.

Sridhar wrote:Maybe a site in the Nicobar islands? There is Indonesia to the east, but perhaps a location can be found such that the distance of the nearest inhabited island in Indonesia along the launch path is far enough for comfort. But then, it would require other infrastructure to set up a space port in the Andamans when all the labs and manufacturing facilities are on the mainland.

Great Nicobar Island (7°00'N 93°50'E) can be a good location for ISRO. The Island has an area of 1045 sq. Km. and is inhabited by around 9439 people. Not much population will be required to be displaced and also the local population can be assimilated with the facility. They will prove to be a great support (shops, hotels, markets, schools, hospitals, police station basic amenities etc.)to the facility, if ISRO builds one there.

Yes, there can be a concern of threat from the Panda. For that the pre requisite would be a Naval base, an army barrack and an airforce base with facility to land transport aircrafts like C – 17 and An – 124. At the same time an airport with facility to land C – 17 and An – 124 should also be built in Sriharikota to transport modules from Sriharikota to Great Nicobar Island.

The average elevation at the centre of the Island is around 100 m to 200 m, so no threat from Tsunami either.
Above all there is there is no significant land mass within 180 km radius of the Island.

Also, it would make a good business sense for ISRO, if India plans to co-operate with the South East Asian countries (ASEAN) in Space Technology. For example a discount of 10 % (just a thought) can be given to ASEAN and a few of the SAARC (ofcourse not the pig) in satellite launch. This would not only bring business but will provide an additional security to the facility. The breakeven point for the facility can be significantly brought down if business from ASEAN can be tapped into.

And yes, there seems to be a Rocket Testing Facility already somewhere near Kanyakumari. But, Lakshadweep would be an absolute no no, something south of porkistan !!
Top

The 50-hour countdown for the launch of Indo-French climate monitoring satellite Megha-Tropiques and three other nano satellites on board PSLV-C18 from the spaceport of Sriharikota started at 9 AM today for launch scheduled at 11 AM on October 12.

BTW The IIT-K has also developed the ejection mechanism for Jugnu. ... GREAT!!

This launch is wurth watching because of the diverse mix of orbits in a single launch:

Meanwhile, SRM University that built the SRMSAT has announced a "Center for Space Technology". It will be in consultation with ISRO, and this is still in the early planning stages and expected to take some shape in six months.

ISRO gets ready to launch Megha-Tropiques
The picture though is that of a Prithvi launch !
Top

SSridhar wrote:ISRO gets ready to launch Megha-Tropiques
The picture though is that of a Prithvi launch !

I was surprised to see Hindu make such a gafee!!!
Top

SRM University's satellite to take to skies
Just to add to what SwamyG has already posted.

As the PSLV-C18 carrying Megha-Tropiques, an Indo-French venture to study the atmosphere in the tropical regions, blasts off from Satish Dhawan Space Centre at Sriharikota on October 12, students will be holding their breath at the ground station at SRM University in the city outskirts.

Along with Megha-Tropiques, SRMSAT, a nano-satellite, to monitor the green house gases, carbon-dioxide and water vapour in the tropics using a grating spectrometer will be launched.

“Fifty students were involved in design and development of SRMSAT, one of the first nano-satellites to be launched by a private university in the country,” said P. Sathyanarayanan, president, SRM University.

“There is a dedicated lab at the university. All the students involved in the project worked at the lab, after college hours, for the past two years, choosing to stay late in the night designing and testing each and every instrument,” says L.B. Vishal, a mechanical engineering student.

When they found that the power amplifier on board was dissipating heat, the students came up with heat sinks. Likewise, communication systems were arrived at after a lot of simulation. “We had to design it perfect to suit the space environment,” says Reuben, a mechatronics student.

Students of 12 departments began work on the satellite with the survey of literature and Loganathan, a former ISRO scientist and product architect of space systems at the university, was available 24x7 to make the dream project a reality. ISRO scientists conducted a review of the project every month and gave insights.

Of cuboid model, the nano-satellite weighs 10.4 kg with three solar panels and was made at a cost of Rs.1.5 crore. The grating spectrometer will monitor earth-based sources and sinks of green house gases for the next two years.

Already in place, the ground station consists of two Yagi-Uda antennae with low noise amplifiers and Trans-receiver and auto tracking is through a satellite tracking programme. “The ground station has been tested by tracking the existing satellites,” says D. Narayana Rao, Director, Research.

Apart from ISRO that will receive signals, the ground station at the University will also receive data. After analysing data for three to four weeks, it will be made available to the scientific community, he said.

“The University is in talks with ISRO to start a Centre for Space Sciences in its Chennai campus. It will take six months to crystallize,” Mr. Sathyanarayanan said. University Chancellor T.R. Pachamuthu and Vice-Chancellor M. Ponnavaikko were present.

Countdown is making "smooth progress". The fourth stage is now 'fuelled up'.

SRMSAT's website sucks. Very slow to the point of being useless.

ISRO has released the flight plan of PSLV C18.

( Could not upload images hence only links given. )

Here are the images from the blog SSSalvi linked. These images are from the ISRO brochure. 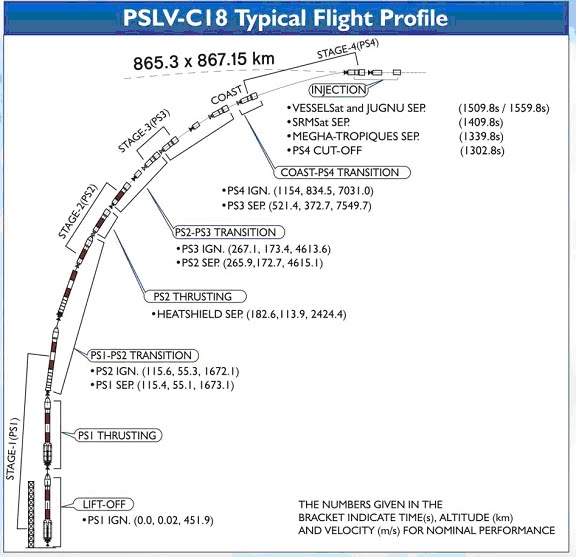 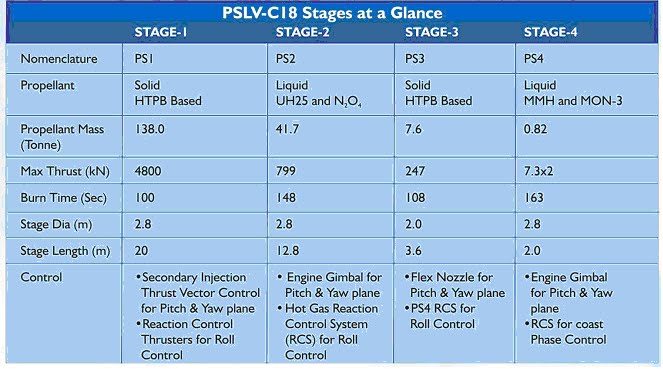 More images at the gallery
here is one sample

Unlike the satellites launched by the PSLV that usually have a polar sun-synchronous orbit, these four satellites will have an equatorial orbit as dictated by their mission.
Top

^^^
Actually it is mix of various inclinations. That is why I said earlier that it a spectacular to watch. The four sats will be launched over a period of 4+ minutes. ( about 260 seconds ).
Top

Nice animation of the PSLV!
Top

Congrats to all ISRO employees
Top

I was on the way to office (in chennai, near tambaram) and missed to see live webcast, but i was looing at the sky to see if i can find any smoke line from distance. Surprisingly i saw a smoke line in the sky at distance north, when i almost reached my office at around 11 AM and thought the launch would be success.
Top

Webcast of the launch was a great treat to Jingos, a confident ISRO was seen today! Congrats ISRO, you made us all proud once again.
Top

Many Congrats ISRO !! A toast to your precision and execution
Top

Congratulations to ISRO personnel and everyone involved. Will treat myself too!
Last edited by vishvak on 12 Oct 2011 13:45, edited 1 time in total.
Top

kudos to ISRO for a wonderful launch!!

The best part if someone watched it on DD was that the statements made at the last. Two of them were in pains to tell that "oh we know that we always say that it succeeded (kind of routine), but we want to tell you that for us its tough every time and need to be on toes when we go for a launch. "

Now the launch video is available on http://www.isro.org/scripts/livewebcast.aspx

So no need of waiting for someone to upload it on Youtube.

Incidentally, The earlier stages appear to have overperformed slightly and the 4th stage ignition was @ about T+1100 sec instead of planned T+1154.

The launch is totally self controlled automation loop.. still 54 seconds is a very big difference.
Is it possible that the system found conditions for PS4 ignition much earlier than earlier programmed time or is the pre-launch brochure only an indicative document?

Even PS2 was ignited about T+105 .. instead of T+116 ( This time the sky was clear so you can ACTUALLY notice the PS2 ignition .. observe it carefully after 00:01:41 on video screen .. one can notice the change in smoke pattern from vehicle .. awsome )
Top

The ISRO chairman had himself said that there is difference of 2 kms. Also you should know the fact that apogee motors will be fired for raising it to the correct orbit. So, this is a regular issue.
Top

Just another routine launch of the PSLV.

I am confident that the GSLV with the Indian Cryo stage will reach the same state of performance very soon.
Top

Launch was delayed by a min to avoid collision with space debris..?
Top

Now the launch video is available on http://www.isro.org/scripts/livewebcast.aspx

The voices are in stereo.
Top
Post Reply
3967 posts

Users browsing this forum: No registered users and 6 guests