All threads that are locked or marked for deletion will be moved to this forum. The topics will be cleared from this archive on the 1st and 16th of each month.
Post Reply
3951 posts

or to put it in another way.,each one would cost as much or more than an Arihant !
Top

^^ A substantial part of that money will be spent in building infrastructure in the new yard selected to build submarines , right now only MDL can build submarine.

The new sub will have AIP which probably will be a different tender within P-75I and good money spent on so called TOT and Lic Production cost , $12 billion is on the higher side , it would probably cost $ 5 -6 billion for 6 subs.
Top

tsarkar wrote:Having said that L&T is out, and HSL is in. Shows Govt commitment to efficient Pvt Shipyards vis-a-vis PSU so sick that they're on Life Support.

Next time the Raksha Mantri or any other mantri/babu talks about more private sector participation in defence he should be laughed out of town.
Top

Whats the take on MDL building new subs ? They are neck deep in several naval projects ! Any more and they will sink , er, literally.
Top

kit wrote:Whats the take on MDL building new subs ? They are neck deep in several naval projects ! Any more and they will sink , er, literally.

They did a shoddy job of managing and building Scorpene subs and the whole project got delayed by 4 years , their new promise is to start rolling new sub by 2015... need we say more

If you give them one more submarine project they will find one more good reason to delay the Scorpene.
Top

Austin wrote:The P-75I is another scam in the making , what the IN wants is a AIP equipped submarine from first sub in new class , which they could have got via Scorpene SSK design since its modular enough to fix an AIP.

What we have is another round of Tender to select another submarine which if not a scorpene design will mean another class of SSK with no tactical advantage , another production line up with new logistics facility and almost $11 billion spent to buy something that Scorpene AIP variant provides.

The IN should just go for a closed/restricted tender with Spain and French and opt for either S-80 design a Scorpene derivative or Scorpene with AIP.

The original long-term program for 24 submarine has envisioned 6 subs of western design, 6 of Russian design and rest 12 of indigenous mixed design incorporating best of both worlds.. So this tendering may just be formality..

The most probable outcome would be Amur 1650 with Brahmos VLS..
Choosing Amur would also be easiest for Brahmos VLS integration ..
Top

AFAIK what the IN has asked for is AIP equipped submarine for the 2nd batch from the 1st sub onwards.

They have not asked for any VLS capability , that is something Amur has advertised for Amur 950 sub.

So VLS is not something IN is looking for but AIP is mandatory.
Top

AFAIK Indian Navy has broadly specified various warfare capabilities and has not been specified any particular weapon system/mode.. Brahmos will be one of the critical component for “Anti-surface” capabilities..
In any case what is the point of developing sub-launced capabilities if you are not going to filed them.. as per Dr. Pillai’s AI-2011 presentation trials for sub-launched Brahmos is scheduled to be completed by 2012 end.

SriSri wrote:Request for Proposals for Indian Navy Next Generation Submarines by 2011-end

What are the option IN have ?
Top

SriSri wrote:Request for Proposals for Indian Navy Next Generation Submarines by 2011-end

What are the option IN have ?

isn't IN interested in 3 more scorpion's with AIP equipped.

Amur has the best chance and German U-214 have the lowest since Pakistan has signed for 3 nos of them.
Top

I believe the RFI also went out to Fincantieri for the S-1000.
Top

dinesha wrote: In any case what is the point of developing sub-launced capabilities if you are not going to filed them.. as per Dr. Pillai’s AI-2011 presentation trials for sub-launched Brahmos is scheduled to be completed by 2012 end.

They will use it on nuclear submarine , Brahmos is a very heavy missile weighs ~ 3T and subsurface launch variant will be equal or heavier. Conventional submarine is restricted by size and other tactical characteristics.

If they add a VLS cell + AIP to conventional submarine it will draw penalty in submarine performance. That is the reason the Russians have not advertised any subs with AIP plus VLS but a small Amur 950 sub with dedicated VLS and minimum torpedo. The new submarine can always adopt a TT launch variant of Nirbhai.
Top

Well, the S80 and the Amur stand good chances imho. S80 because of its similarity to Scorpene, and larger to boot. Amur because of its commonality and heritage in Kilo (in case IN wants to "diversify") and ability to use Brahmos. 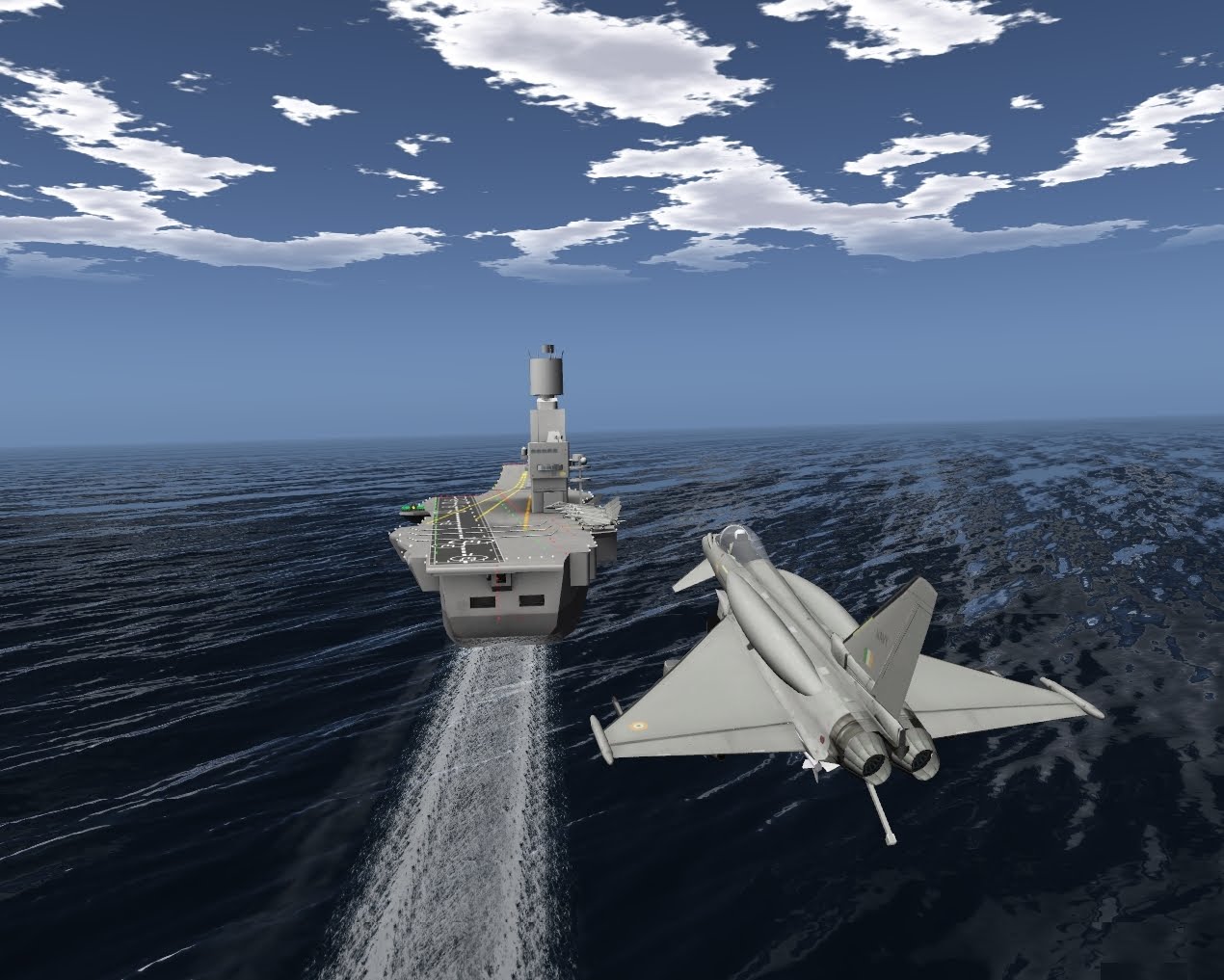 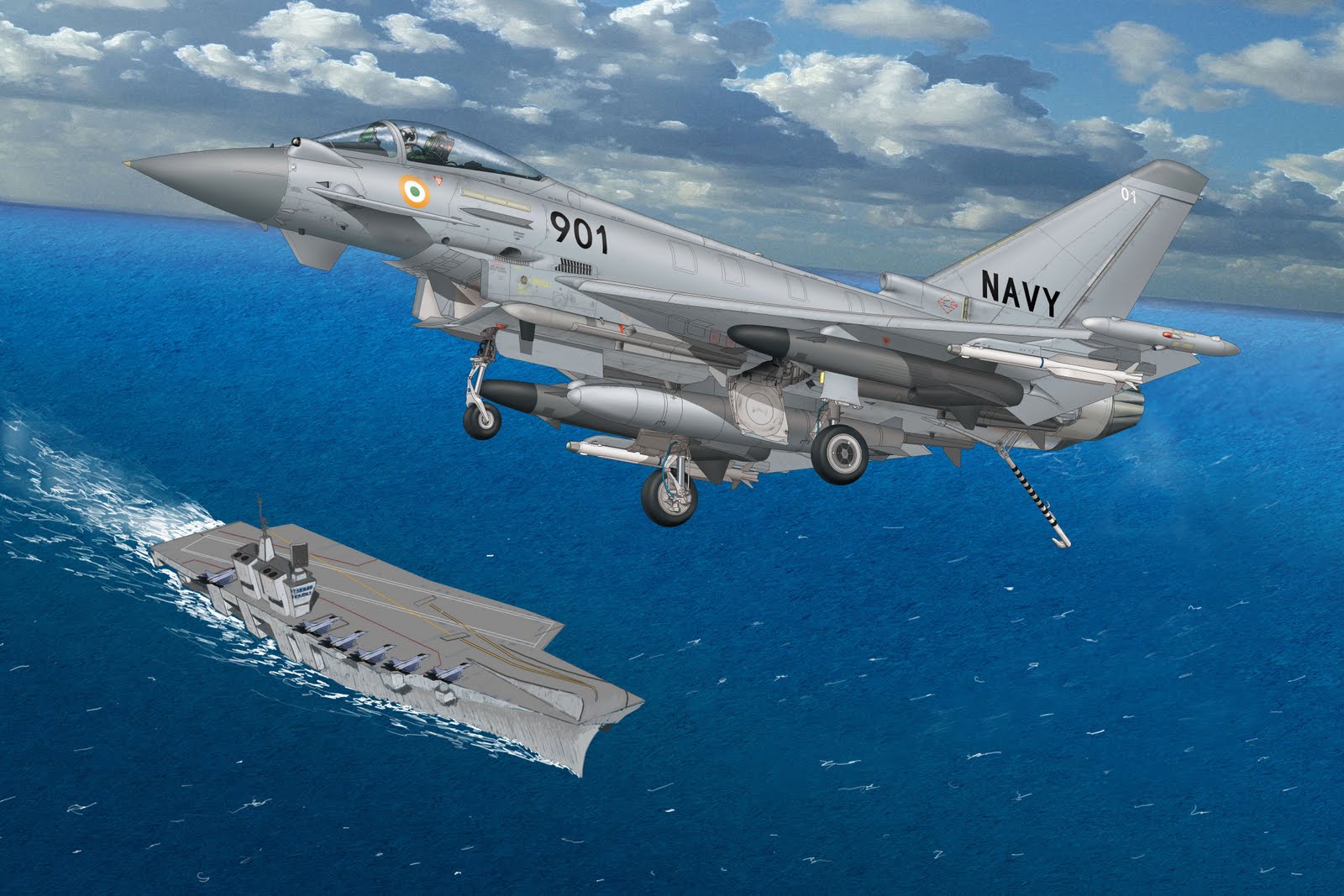 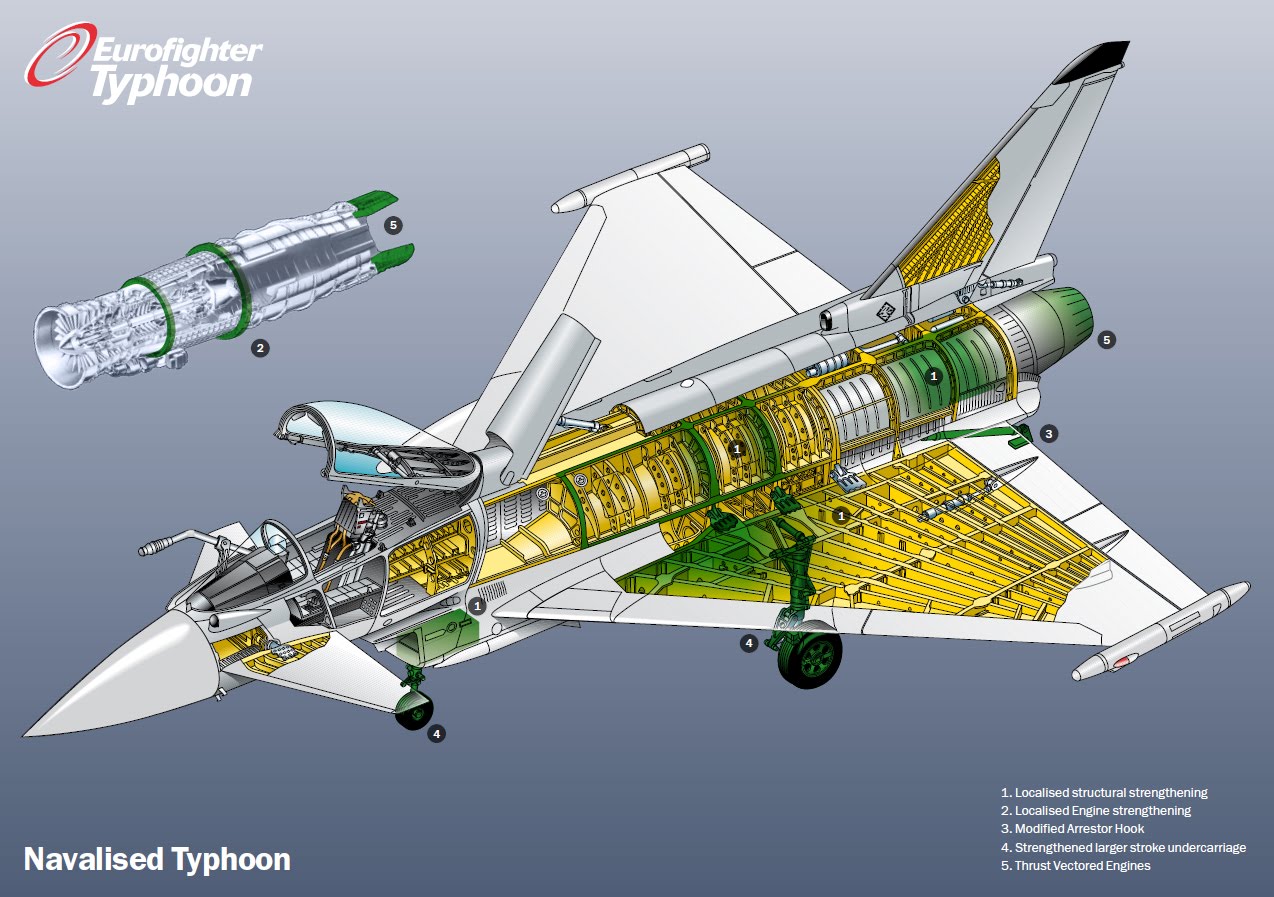 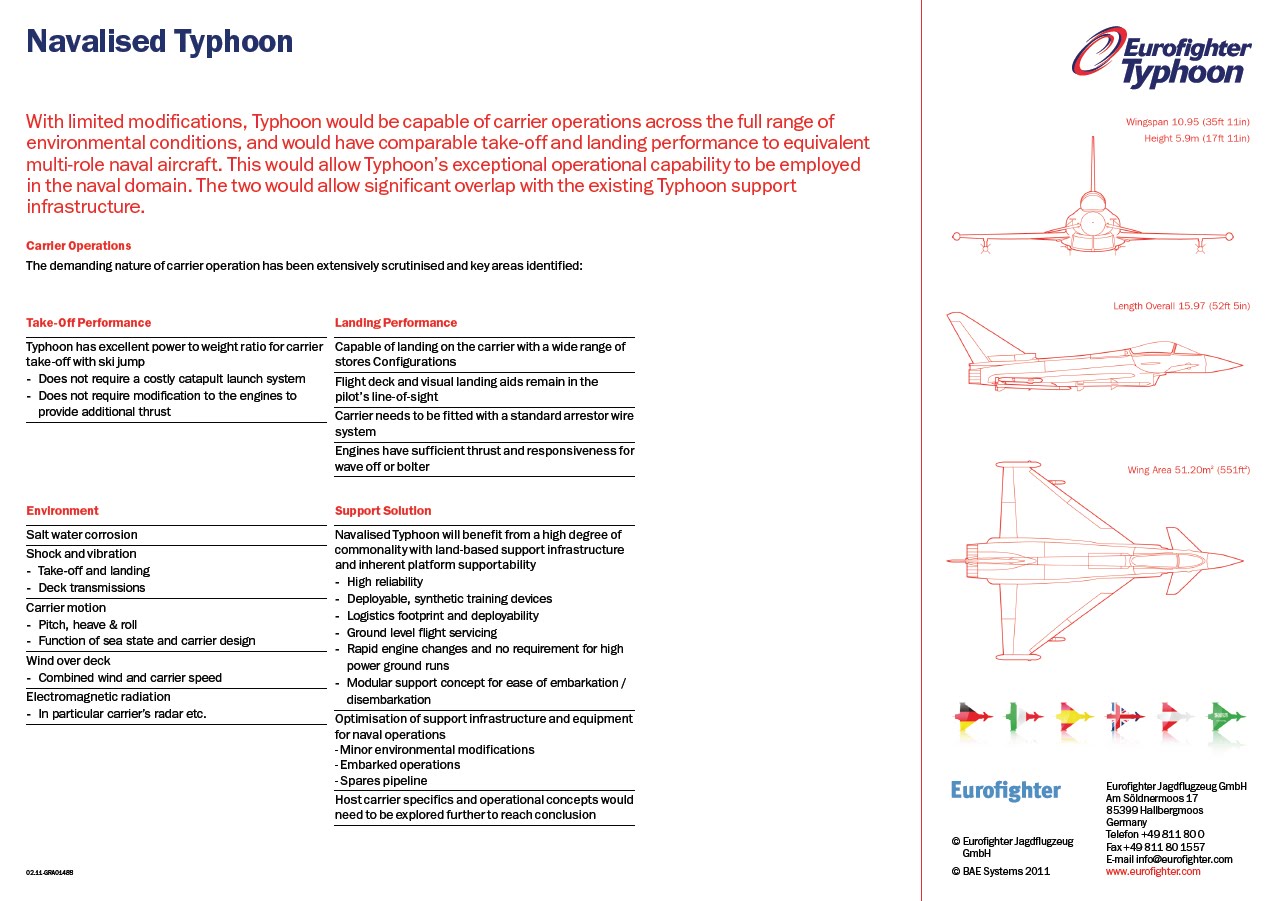 ^^ Naval Typhoon looks good on paper but who will pay for its development if IN is the only launch customer ?
Top

neither naval typhoon nor naval gripen will ever see the light of day.
Top

Indian maritime surveillance plane to be based in Seychelles

A fully-equipped, 33-person Indian crew also arrived in advance of the aircraft and will remain for the duration of the loan, running the aircraft while undertaking the training of local counterparts for the eventual arrival of the permanent Dornier.

Now, I know this is more like a wet dream but a fully evolved Naval Eurofighter from any aircraft career's deck will be a formidable aircraft.

Now a noobie question - what are the plans for aircraft component for the larger AD Ships we propose to develop? IAC1 and Vik will have Mig-29K and NLCA as air component, but what about 60K ships?
Top

they are still some way off and I fully expect to see something beyond 4th gen on those.
there are serious technical difficulties in navalising the typhoon btw. it's completely not worth it, given the investment needed, which would have to come from us.
Top

Currently, IN looking for options. By the time 60 K ships will roll in, the 5th gen ac era will begin. The navalised pak-fa and AMCA navalized is my 1 paise. Don't be surprised in F-35 IN starts vertically lands on the desk.
Top

What would be the timeframe we're looking at these larger carriers? Would AMCA,if built ground-up with the IN in mind, be ready (IOC)?
Top

Prasad wrote:What would be the timeframe we're looking at these larger carriers? Would AMCA,if built ground-up with the IN in mind, be ready (IOC)?

I don't think IN is in any hurry for IAC-2. by 2015 they will have two mid sized carriers and that is as good as they ever had. they are likely to hold their decision till we have some clarity on the aircraft thing, whether PAKFA would be navalised, how quickly AMCA progresses and so on. the carrier would be designed around the aircraft and not vice versa.
Top

IMO, we should be looking @ larger carriers after IAC 3. So, Singha's 2025 timeline is correct. AMCA should be a logical replacement to LCA naval. There is no point building a Naval varient ground up.
Top

also indo-US relations in 5 yrs time will factor into the catapult decision, which drives the aircraft design. the AMCA if its going to be navalized for catapults needs to be thought about from day1 along those lines - whether a lighter version for IAF or the same version (tail hooks, strong legs, high sink rate, folding wings) for both using very powerful engines to make up.
Top

About some 15 years ago there were plans to Build and induct Upholder class Subs into Indian Navy.
Can any one shed some light as to what happeded to those plans?
Top

Don't know much but found this at a discussion
"They were sold initially to India, and then given a licence to build."
http://www.worldnavalships.com/forums/s ... 76c&t=4505
Top

patent BS. upholder was never seriously considered by us. we were busy with building type 209 and associated scandals.
considering their record in canada can't say we lost out on much.
Top

That is right
Top

At Aero India 2011 Eurofighter and partner company BAE Systems unveiled for the first time more details about the studies carried out for the initial definition of the navalised version of the Typhoon.

These studies have included the assessment of required design changes, piloted simulations to refine the aircraft’s handling qualities and discussions with key suppliers. The studies indicate that these changes are feasible, and would lead to the development of

The Most Important Element of the Navalised Typhoon is that its Exceptional Thrust-to-Weight Ratio Allows the Aircraft to Take Off from a Carrier Without using a Catapult but with a Simple and Much cheaper “Ski-Jump”.

Detailed Simulations have Shown that the Aircraft will be able to Take Off and Land in this Way with a Full Weapon and Fuel Load – providing a Truly Potent and Flexible Naval Aviation Capability.

The basic design of Typhoon helps to minimise the modifications needed to allow a Typhoon to conduct naval operations from a carrier. The aircraft’s structure is exceptionally strong, having been designed from the outset for the high dynamic loads associated with extreme air combat manoeuvring. The modifications required are limited and include a new, stronger landing gear, a modified arrestor hook and localised strengthening on some fuselage sections near the landing gear, as well as updates the EJ200 engines.

Introduction of a Thrust-Vectored Variant of the Eurojet EJ200 Engine.

Thrust vectoring (Engines with TVN have already undergone factory testing in the Eurojet facility) could be fully integrated into Typhoon’s advanced Flight Control System (FCS), allowing the pilot to focus on flying the approach path while the FCS manages the engine nozzle position. The ability to change the angle of the engines’ thrust will allow for a further enhancement in Typhoon’s already outstanding manoeuvrability, supercruise performance, fuel consumption and the handling of asymmetric weapon configurations.

A Key Design Driver for Navalised Typhoon is the Commonality at 95 per cent with the Land Variant.

Design Changes are Minimised, Allowing for Most of the Spare Parts and Test Equipment to be Shared Across a Customer’s Air Force and Navy Fleets.

The Sensors, Systems and Weapons available to both Variants will be Common, allowing for a Reduction in the Aircrew Training Requirements.

The Two Variants will Benefit from a Common Upgrade Path – New Capabilities will be available to both the Air Force and Navy in Similar Timescales.

A Navalised Typhoon can Deliver this Commonality, without Compromising on Capability.

Rahul M wrote:patent BS. upholder was never seriously considered by us. we were busy with building type 209 and associated scandals.
considering their record in canada can't say we lost out on much.

In Early 90s IIRC there was plan to procure 6 Upholders but instead went with more Kilo's.
Top
Post Reply
3951 posts

Users browsing this forum: No registered users and 21 guests