All threads that are locked or marked for deletion will be moved to this forum. The topics will be cleared from this archive on the 1st and 16th of each month.
Post Reply
587 posts

Can anyone identify the plane that was shot down?

compare that news with this:- nice demo I guess

yes people say it was a mig23.
Top

French were waiting for opportunity to show their military might against a weak country. What an opportunity they got, a weak arab/muslim libya. Their talk of helping people of libya is bullshit. Why r they keeping quite on KSA, yemen, etc.
Top

Singha wrote:yes people say it was a mig23.

I see the chute!
Top

can people pls refrain from comments about the rationale or moralism of it - pls use the west asia or other threads for that.

pls confine to purely military news and views given the sub forum we are in.
Top

Looks like a Mig-23 and the pilot seem to have ejected safely.

I saw the TV footage of this aircraft , looked to me like an engine flameout then actually being shot , let wait for more details.
Top

ramana wrote:RahulM, Why the move? The reason for NFZ thread being in strat forum is its a political issue in the end and hardly technical. I had suggested to GD to start the thread to let the West Asia thread look at big picture.

ramana ji, we armchair jernails want a piece of the action too don't we ?

seriously though, the political aspects can be continued to be covered in west asia thread as it is being done. I hope this one gathers the technical aspects which might not be that inconsiderable.
Top

The French can certainly handle this one on their own, if they want to. To be honest they don't even need British or Italian help; with their aircraft carrier in the Mediterranean sea equipped with Rafales and Super Étendards, plus the various supporting frigates and destroyers, they already have 10x more firepower than the entire Libyan military. Plus they've got land-based Mirage-2000's operating from Malta, Italy, and probably Chad as well. If they wanted to have some fun on the ground they could also send in special forces or even French foreign legion but that would be overkill.

The British could join in just for grins (and they may end up doing so) but they aren't really needed. As for US involvement, frankly this annoys me. If they had any sense they'd just stay the hell out, keep their hands clean, and let the Europeans take care of business for once.

Frankly, I doubt the Libyans could even manage to down a single French or British plane. If the French or Brits lose any aircraft it's almost certainly going to be from mechanical failure.
Top

are we really avoiding the temptation to discuss the political aspect of the issue?...but I agree it'll go haywire...finally will end up on we all discussing the US of A.
Top

Austin wrote:Looks like a Mig-23 and the pilot seem to have ejected safely.

I saw the TV footage of this aircraft , looked to me like an engine flameout then actually being shot , let wait for more details.

News is that ejection height was too low and pilot did not survive his landing.
Top

Raja Bose wrote:News is that ejection height was too low and pilot did not survive his landing.

Oh yes it was certainly low , I could see the ejection happening at low altitude in that footage but I have seen K-36 ejecting at even lower altitude barely few meters and surviving , the seats may not be the K-36 types.

RIP to the Pilot
Top

but truly a massive airbase
Top

if you see in this video embedded in the news at around 00:24,26 the pilot ejects...and still the plane has a lot to descend...how low is too low for it too be fatal...I guess he died from other injury while ejection...
Top

French planes have declared an exclusion zone outside Benghazi and are reported to have fired at a military vehicle.

A headline on globeandmail.com says that they are also attacking tanks.
Top

It is not the question of french alone handling or rebels alone. It is a question of joining the forces just to avoid any unilateral force naming to follow, that the current or new age democratic people hate. Unilateral days are gone with Bush era!.
Top

I though the crashed aircraft looked like a Su24.
In any way, trouble has just started. I hope the West has enough sense to let arabian troops do some fighting for their muslim brothers.
Lets see..
Top

Western powers and specially France is now taking an action, we have already seen the video footage of a fighter being shoot down. The article French Planes Seen Over Libya; Gaddafi Calls Injustice says that France has done all video observation through reconnaissance aircraft and is probably done with all preparation of planning and strategy. Bit I still wonder why this is all happening?

I pray to god, no more killing please. In between Gaddaffi has said tht he will make the west regret that they took such an action. Don't know but I believe tackling Libya is easier than Afghanistan and Iraq, as it is just south of European powers.
Top

khan does nothing in half measure

US Launches Missile Strike in Libya Pentagon has confirmed that US Navy launched Tomahawk sea launched cruise missile to destroy Libyan air defence equipments in a move to support european and french aircrafts.

British submarine also launched some of the Tomahawks.
Top

Oh no. Now the Libyans will also have the Tomahawk technologies.
Top

Most probably dud mijjile if any will find it's way to Iran/Syria. Unkil is known for making a paki out of such events.
Top

CNN just showed some rafale fighters taking off dont know if it is a file photo. [juvenile]Btw we need some live firing practice we should sneak in some iaf fighter in french colour with the pilots having their hair dyed to blonde[/juvenile] Btw a very mature(some may call this timidity) approach by Unkil after eyeraq and afg, hard to believe that this is coming from the erstwhile Rambo, they have an a/c in the gulf still they didnt open the batting today
Last edited by suryag on 20 Mar 2011 02:41, edited 1 time in total.
Top

How can USA stay back from it...They are here to free the world from sinister regimes. WOW what a flamboyant start against a weak nation.
Hopefully something like this happens in China, then I would like to see who does what...

They expect that CnC to be transferred to coalition forces soon.
Top

shows advantage of a huge inventory. nobody else could remotely throw even 30 slcm at this.
Top

How fast do these missiles travel? They took a

al zajera - ramstein psyops afb might take over soon...humongous as we know

The Pentagon says that the UAE and Qatar will also be involved in military operations in Libya, but will announce their involvement themselves.

The operation falls under the operational command of the US African Command, under General Carter Hamm. Tactical execution is being run out of the USS Mount Whitney, Admiral Sam Locklear commanding.

Off the coast of Libya, there are: 11 vessels from Italy, 11 from the US (including three submarines, each with 100 missiles on board), one from the UK, one from France and one from Canada.

That news [of French air strikes] came even before the Paris summit meeting adjourned, with President Nicolas Sarkozy announcing that French warplanes had begun reconnaissance missions around Benghazi, and the French military saying that a Rafale jet fighter had destroyed a government tank near there.

Even though the leaders at the Paris summit meeting were united in supporting military action, there were signs of disagreement over how it would proceed.

Two senior Western diplomats said the Paris meeting, which was organized by Mr Sarkozy, may actually have delayed allied operations to stop Colonel Gaddafi's troops as they were approaching Benghazi. The officials spoke on condition of anonymity because they were not authorized to comment on the matter.

The initial French air sorties, which were not coordinated with other countries, angered some of the countries gathered at the summit meeting, according to a senior Nato-country diplomat. Information about the movement of Gaddafi troops toward Benghazi had been clear on Friday, but France blocked any Nato agreement on airstrikes until the Paris meeting, the diplomat said, suggesting that overflights could have begun Friday night before Mr Gaddafi's troops reached the city.

Surya, I guess you forget Kargil and other threads.

RahulM,
No matter I will open another thread in strat forum.

There was to need to move this one here.
Top 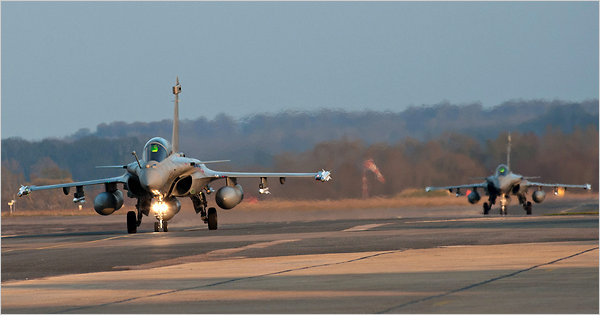 French Rafale fighter planes returning back from a mission in Libya at the military base in Saint-Dizier, France on Saturday.
Top
Post Reply
587 posts

Users browsing this forum: No registered users and 55 guests