Why is everyone so flustered on P-8I? It meets our requirements; plain and simple. Why are we bothered about what is in P-8A? It is a different model and would definitely see further upgrades which may or may not be available to us.

I am sure that when we export Tejas, we will not provide the best model to others, either.

If we want the best capability in any area, we have to make our own or enter into a JV like Brahmos.
Top

it is well known all along that US does not want those P8s to be moving in close to TSP or targeting their shore infra. thats why the SLAM ( a land attack derivative of harpoon ) is not on the sale table for us, though others have been sold it. same goes the SAR/ISAR modes.

so far we have done precious little to operationalize even the small XV2000 radar , let alone a powerful maritime search radar. until such time we are at the mercy of downgraded models.

even the IL38 May upg had certain downgrades. but unlike P8 or other american hw, these things are not clearly spelt out in russia/euro deals. hence its all cool as we dont know such intricate details

my understanding is thats already the case via BEL. note that russia also will not under any circumstances give away its hard fought submarine and ship signature databases that permit automatic match and tag. thats upto us to pull our pants up, lay sosus arrays, tail foreign assets and build our own database. 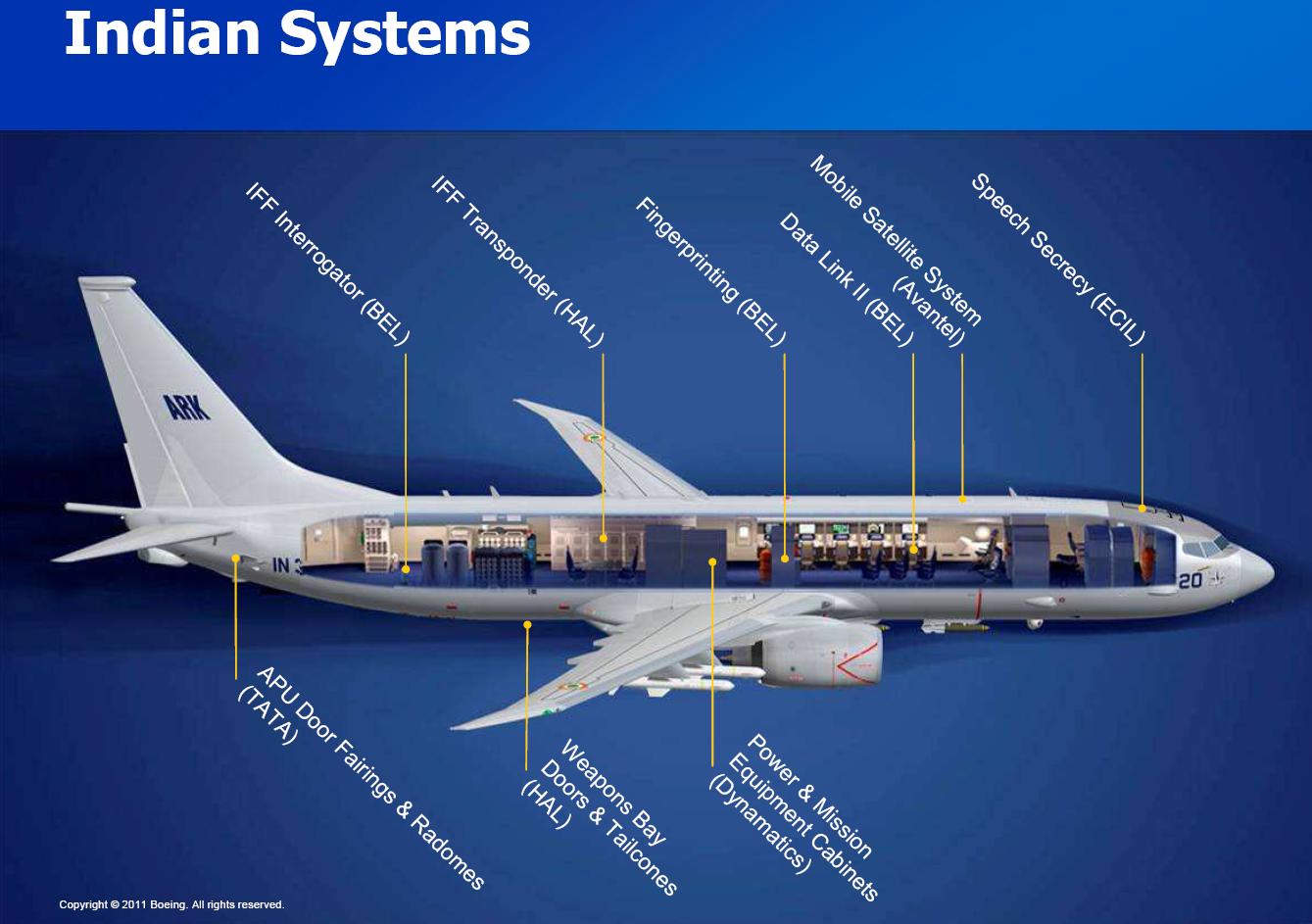 Vivek K wrote:What is that box on the bottom right corner of Hakimji's photograph! Definitely a no-no so close to runway centerline.

May be he is asking about this Vivek K wrote:What is that box on the bottom right corner of Hakimji's photograph! Definitely a no-no so close to runway centerline.

Could be the landing system that indicates glide slope and tells the deck officer whether to tell the pilot to abort the landing or to go ahead.
Top

there probably is...
Top

the APS143 should give us all the SAR we want...but who wants SAR from a aft radar ? . the downgraded APY10 radar likely has 10cm SAR res regardless of keeping it less on paper and hence not cleared for export. the same tech may be in use in drones to see small targets and even signs of dug up earth where insurgents buried mines and IEDs.
Top

100 pages reached. Thread locked. Link to next incarnation of the thread.
Top

IAF plans for dedicated satellite on track; Sukhoi to fire BrahMos in 3 months
By Our Defence Correspondent

Bengaluru: The Indian Air Force (IAF) will soon have its own dedicated satellite to boost its operational capabilities. During a media interaction at the Aircraft and Systems Testing Establishment (ASTE) here, as a run up to the 84th IAF Day on October 8, Air Vice-Marshal Sandeep Singh said the plan is on the move.

While he refused to give too many details on the project, set to be executed by the Indian Space Research Organisation (ISRO), the ASTE Commandant said the process is on at IAF HQ towards having a dedicated satellite.

He said the availability of such a satellite, on the lines of Indian Navy (Rukmini from the GSAT series), would enhance IAF’s NCW (Network-Centric Warfare) capabilities. ”It certainly does increase the efficiency of our critical missions,” he said.

To a query on the use of Indian Regional Navigation Satellite System (IRNSS), AVM Sandeep Singh said the IAF will soon switch over to the desi GPS. He said the receivers for the purpose have been already made ready.

However, ISRO sources said that the project is yet to formally get a government nod, pointing that the IAF wait could be longer.

Saras project on road to revival

sarasThe 14-seater ambitious Saras project of National Aeronautics Limited (NAL) might see fair weather again with the government mulling a revival plan for the same. The Council for Scientific and Industrial Research (CSIR), that had almost shelved the plan, is on a rethink mode with additional funding in the pipeline.

As reported earlier, the funding for Saras project had dried up during UPA-2’s fag end putting the entire project into a spin. The project was already mired in overweight issues, a crash and a scathing CAG probe in a span of 11 years since its first flight in 2004.

ASTE had lost two Test Pilots and a Flight Test Engineer in the Saras crash in 2009. Now, the ASTE officials confirm the ‘revival plan,‘ having attended meeting(s) aimed at getting the platform back on air.

Sitara, the Intermediate Jet Trainer of Hindustan Aeronautics Limited, is also on the ‘recovery mode’ after being in the ‘ICU’ for many years now. The project seems to have got a new impetus for its ‘spin and stall’ trials.

iafOn the ongoing flight test programme of BrahMos supersonic missile being integrated on a modified Su30-MKI, ACM Sandeep said that advanced trials are in progress.

“We’ve already completed a dummy drop. The next step will be to test another parameter, before we fire the actual missile,” he said.

It was Wg Cdr Prashanth, a Test Pilot, and his buddy Wg Cdr M S Raju, a FTE, -- both from ASTE -- who had successfully carried out the first flight of Su-30MKI fitted with BrahMos on June 25 this year.

Tejas is best in its class; already in Hindon

iafThe top IAF pilot was all praise for the Light Combat Aircraft Tejas, which was inducted into the IAF on July 1.

During his briefing, the ASTE Commandant said that the Tejas Squadron members are already at AFS Hindon for the AF Parade on October 8.

“Two aircraft will be at Hindon this time with one more likely to join,” he said.

He said the runway upgradation work and other construction activities are already in full swing at Sulur, near Coimbatore.

“Initially the Squadron will operate from Bengaluru and the Sulur facilities will be ready in the next two years,” AVM Sandeep said. The progress of work at Sulur, which will be the home for Tejas Squadron, is being monitored by the Southern Air Command, headquartered at Thiruvananthapuram.

As reported by Mathrubhumi earlier, the IAF teams have already flown Tejas for over 30 hours in the last three months alone, post induction.

iafWith India completing most of the formalities to buy 36 Rafale jets from France, a Project Management Team (PMT) from IAF is preparing for yet another overseas stint. This, according to ASTE officials, is a procedure being undertaken whenever new aircraft are bought from abroad.

“The whole idea is to get the Rafales with India-specific characteristics, as being often termed. The PMT was part of the teams abroad during MiG-21\MiG-27 upgrades and ahead of Sukhoi induction as well,” AVM Sandeep Singh said.

According to him, the presence of the PMT with the Dassault would help to customise the finer features of the aircraft, as desired by the IAF.

“Our pilots have already have flown the Rafale during its evaluation trials. They could take our guidance (PMT) before finalising the draft documents. There are many more activities we would involve in the next couple of years before the aircraft start coming to India,” he said.

iafWith the IAF opening up the fighter streams to women pilots recently, ASTE is not ruling out the possibility of having Test Pilots from the fairer sex as well, in future.

To a query whether women could qualify to be TPs in future, ASTE officials said that it is a probability, subject to many conditions.

“First of all they will have to get Permanent Commission. Then they will have to qualify for all the stringent procedures ahead of becoming a TP. It could happen. We are not ruling it out. They are welcome and we have no gender bias here,” says an official.

ACM Arup Raha speaking to Mathrubhumi at AFA Hyderabad in June this year, did not rule out the possibility of a woman fighter heading IAF in future.

“I cannot say no, because the probability is there. If they do well. Normally the Chiefs are from the flying branch. They (the three girls) are already in the flying branch. And, if and when they get Permanent Commission, then they definitely have a chance,” he had said.

His views were also echoed by Air Marshal S R K Nair, Air Officer Commanding-in-Chief, Headquarters Training Command. He had said that IAF is inclusive in all its activities giving equal opportunities to both men and women.

During the media visit on Tuesday, the ASTE also had organsied a flying and static display of some of its assets. Earlier, Chief Test Pilot Group Capt Subrato Chaki gave a rare insight into the activities of ASTE.

Users browsing this forum: No registered users and 20 guests