All threads that are locked or marked for deletion will be moved to this forum. The topics will be cleared from this archive on the 1st and 16th of each month.
Locked
425 posts

^^ From the same link., check out the GSLV Mk II launch manifest - indicates at least 2 launches per year for the next 5 years to just catch up with the proposed plan 5 years back!

I think demise of GSLV Mk II are premature.
Top

nirav wrote:You apprantely have no clue where the first and second stages of the GSLV mk2 and mk3 end up landing. Then you engage in eye ball mk1 calculation of distance of where it might land,seen from Chennai,hence not far.

Compare this to the direct quote that I posted of S.Ramakrishnan who is ex director of VSCC who mentioned launch constraints of the first and second stages of the GSLV to avoid Malaysia and Indonesia,necesitating a 50% effort needed from the top Cryo stage.

Now,who do you think is whining? 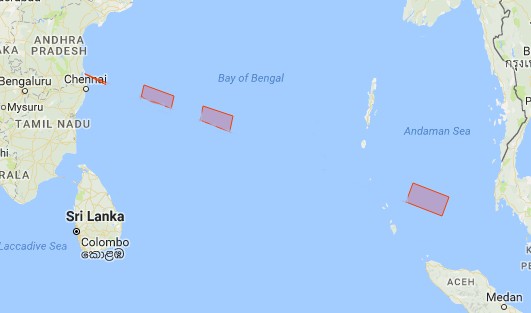 For comparison in a two stage to orbit launch such as the Falcon 9 from SpaceX, the notams are:

For the 1st stage and note that for the 2nd stage, the reentry is in the southern Indian Ocean, off south west Australia, literally on the other side of the world. This was for the LEO CRS-3 launch when SpaceX attempted an experimental soft landing for the 2nd stage to recover it for potential re-use. 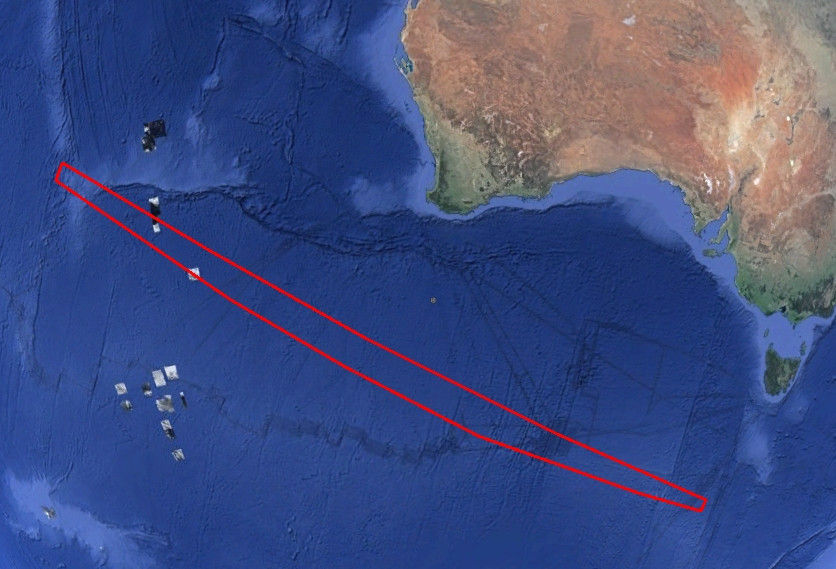 Does anybody know what happened of the PSLV-HP version?
Top

GSAT-19 updates from ISRO website., my notes below the updates:

Archive of Updates from ISRO

In the Nasa pakdef forum., there was this rona-dhona about "shortfall of orbit of GSAT19 by GSLV Mk III" which was a shortfall of some 15 m/sec (the engine was cutoff early). This is equivalent of 440 N LAM engine firing for 10 seconds more to cover for the shortfall (or rather., the cryo stage was cut-off 1/50th of a second too soon).

shiv wrote:Do all launches "appear" to go SouthEast because of westward rotation of the earth? If that is correct - ....

To add to Sri-Kumar..
To launch a rocket for equatorial orbit (geo-synchronous type sats) one likes to choose a point as close to equator and launch is done towards East direction ( eastern shores are thus nice locations as there is ocean towards east). This way you use the initial earth's spin velocity to max effect. For polar orbits, the direction can be north or south and the earth-spin velocity is not that helpful.

dishaji!!! n2yo data of GSAT19 orbital parameters are not matching with ISRO data...may be n2yo might have not updated!!!!!
Top

Why do we even trust n2yo?
Top

With the success of the Geosynchronous Satellite Launch Vehicle Mk-III (GSLV Mk-III), ISRO’s Liquid Propulsion Systems Centre (LPSC) here at Valiyamala is now focusing on the next level - the development of the much-delayed semi-cryogenic technology.

"Various tests are in progress on the engine. Of the four turbo pumps in it, three have undergone tests at the ISRO Propulsion Complex, Mahendragiri. We plan to have the engine ready by 2019 end, the stage by 2020-end and the first flight by 2021,’’ S Somanath, director, LPSC, said.

The advantage of inducting the semi-cryogenic stage is the payload capacity of the GSLV Mk-III will increase from four tonnes to six tonnes. Using refined kerosene as fuel has quite a few advantages: It is eco-friendly and cost-effective.

Also, unlike liquid hydrogen - which has to be stored at (-)253 degree Celsius, it is stable at normal temperature. The Union Cabinet had cleared the semi-cryogenic engine project in 2008 at an estimated cost of Rs 1798 crore. Although the idea was to develop the technology 2014, the project got delayed.

The Union Cabinet had cleared the project in 2008

^^ I always felt that news of "ukranian" help or "russian test facilities" for semi-cryo for ISRO were plants. That is., fake news.

A agency that has developed two tech pathways to cryo engines (staged combustion and gas generator) and as a country have great chemical engineers and great oil refining facilities going for outside help now always sounded implausible.
Top

There is only a single public original satellite tracking data source in existence. That is USAF JSpOC via space-track.org. All other sources like n2yo take data from space-track.

JSpOC doesn't update the data for every object every day. They generally only care about debris and only debris content is autotracked everyday. Controlled satellites are only reviewed occasionally. There is no preset timeline for TLE updates from JSpOC. You have to wait till you get it.
Top

I agree. It seemed ridiculous to me that we couldn't refine kerosene to the level required or not be able to modify or create new test facilities to test the semi-cryo engine after we had mastered handling liquid hydrogen.
Top

The last DNG ZONE -4 is off great nicobar., and very near thailand and indonesia.

I sometimes wonder what happens if the separation bolts do not go off., the second stage carries the two boosters and then separates at its cut-off point., the entire 1st stage (boosters) and the second stage will be a aerodynamic "missile" - reentering and not burning up and may end up in the EEZ of a another nation!
Top

^I guess the range safety officer would do the needful ....
Top

nirav wrote:You apprantely have no clue where the first and second stages of the GSLV mk2 and mk3 end up landing. Then you engage in eye ball mk1 calculation of distance of where it might land,seen from Chennai,hence not far.

Compare this to the direct quote that I posted of S.Ramakrishnan who is ex director of VSCC who mentioned launch constraints of the first and second stages of the GSLV to avoid Malaysia and Indonesia,necesitating a 50% effort needed from the top Cryo stage.

Now,who do you think is whining?

Are you serious? x4.

First you jump into something which you have no idea of.Refer to a quote from the project director of VSCC and the resultant post as whining, and post the mark Twain quote.

Quit making a fool of your own self please.
Top

Lol.
None of your flights of fancy spreadsheet rockets solved for where the stages would land.

When the idiocity is pointed out, you engage in classic obfuscation and your ridiculous qna.

I recall your posts on vix and how you in your God complex mode pompuosly made a statement on the market.

Just because no one reacted either cause no one was aware of maybe not interested let's you get away with half baked stuff.

Not @ the spreadsheet rocketry though.
You could bah pah all you want. Doesn't change a bit that the whole exercise was nothing but amateurish buffoonery.
In hindi it's called - baap Ko (fill in the blank) sikhana.
Baap = ISRO.
Top

juvva wrote:^I guess the range safety officer would do the needful ....

How will the range safety officer know that the solid boosters have not detached in spite of the command given to the separation bolts to fire? This will show up as under-performing second stage., but the rest of the telemetry will be stating that the engine is performing as normal! So engine is performing normal and stage is underperforming., the range safety officer then has to decide between destroying the rocket or letting it continue., since 3rd stage may compensate and the LAM may compensate as well.

But again., all of this is not left to chance and to the last day. Several such calculations go into designing a launch vehicle to ascertain within limits what happens when failure conditions arise. This calculation *is* rocket science.

For example., launching 104 sats in one-go required 5000 variables to be permuted! This is something other launch agencies do not have. And all this calculations are performed and some are drawn up as requirements even before the rocket is designed!!
Top

And sir., your point is?
Top

Mods. My recommendation now is to close this thread.
Top

And sir., your point is?

Being speechless at stretching a discussion in non-sensical direction.
Top

Thread closed based on consensus. Can continue is Space thread....
Top
Locked
425 posts