The Technology & Economic Forum is a venue to discuss issues pertaining to Technological and Economic developments in India. We request members to kindly stay within the mandate of this forum and keep their exchanges of views, on a civilised level, however vehemently any disagreement may be felt. All feedback regarding forum usage may be sent to the moderators using the Feedback Form or by clicking the Report Post Icon in any objectionable post for proper action. Please note that the views expressed by the Members and Moderators on these discussion boards are that of the individuals only and do not reflect the official policy or view of the Bharat-Rakshak.com Website. Copyright Violation is strictly prohibited and may result in revocation of your posting rights - please read the FAQ for full details. Users must also abide by the Forum Guidelines at all times.
Post Reply
6262 posts

^^ I track that dashboard almost every second day, and it hasn't moved for around 10 days. Not sure if there is lack of reporting, or work has come to a standstill due to the second wave.
Top

Yes I noticed that the incremental gain is less than the 2% typically. It appears to be a reporting delay associated with the Covid situation, so I went ahead and posted it anyway since it would thus be representative of middle of the month when I typically do my update.
Top

Close to one million civilian postings in the central government, or 22.7% of total sanctioned positions of about four million, were lying vacant at the end of the fiscal year ended March 2019, data from the finance ministry show.

^^^
Good its saves Rs One Lakh Crore per year in pay expenditure which can be invested in infrastructure. Railways at 12 lakh employees have 3 lakh empty posts but of this 12 lakh 4 lakh are deemed surplus which when vacant will save Rs 40000 Cr/ year.
Why doesn't the post vacant not required eliminated than declared as vacant.
Top

^Good point. Not sure if the concerned ministries are thinking in that manner. Or even the minister has focus on the "vacancy" and streamlining job postings.

Regarding the Jal Jeevan Mission:

The data from 11 pilot locations about the daily water supply quantity and regularity are shown on the Jal Jeevan Mission dashboard.

Imagine mapping water distribution and consumption in each and every village and near real time monitoring of it. Just brings direct service delivery to the consumer.
Top

Foreign direct equity investments (FDI) inflows grew by 19 per cent year-on-year (YoY) in financial year 2020-21 (FY21) to a record $59.64 billion, according to data released by the Department for Promotion of Industry and Internal Trade (DPIIT) on Monday.

Despite the disruption caused by the Covid-19 pandemic in FY21, India attracted the highest ever total FDI inflow, which includes equity capital of unincorporated bodies, reinvested earnings, and other capital. Total FDI stood at $81.72 billion, up 10 per cent YoY. In FY20, India attracted gross inflows of $74.39 billion.

“Measures taken by the government on the fronts of FDI policy reforms, investment facilitation and ease of doing business have resulted in increased inflows. The trends are an endorsement of India’s status as a preferred investment destination amongst global investors,” an official statement said.

According to the data shared by the government, Singapore remained the largest source of FDI for the third consecutive year, with a share of 29 per cent. It was followed by the US with 23 per cent share, and Mauritius with 9 per cent.

“Out of top 10 countries, Saudi Arabia is the top investor in terms of percentage increase during FY21. It invested $2.8 billion in comparison to US$ 89.93 million reported in the previous financial year,” the statement said, adding that there was a 227 per cent and 44 per cent increase recorded in FDI equity inflow from the USA and the UK, respectively. 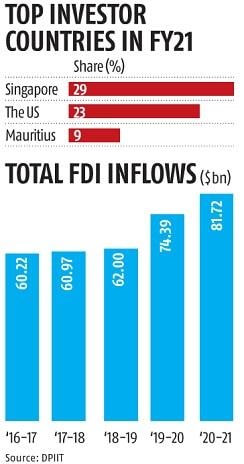 Gujarat was the top recipient of FDI among states, with 37 per cent share of total FDI equity inflows, followed by Maharashtra and Karnataka with 27 per cent and 13 per cent, respectively.

Gujarat attracted the lion’s share of inbound FDI under the computer software and hardware sector at 78 per cent. This was followed by Karnataka and Delhi at 9 per cent and 5 per cent, respectively.

and Construction (Infrastructure) Activities (2 per cent) during the FY21,” the statement said.

Computer software and hardware emerged as the top sector in FY21 with around 44 per cent of the total FDI equity inflow, followed by construction and infrastructure-related activities at 13 per cent, and services sector’s with 8 per cent.
Top

sankum wrote:^^^
Good its saves Rs One Lakh Crore per year in pay expenditure which can be invested in infrastructure. Railways at 12 lakh employees have 3 lakh empty posts but of this 12 lakh 4 lakh are deemed surplus which when vacant will save Rs 40000 Cr/ year.
Why doesn't the post vacant not required eliminated than declared as vacant.

<Lurk mode off>
Sorry Sanku jii, I beg to differ.

This is an opportunity to pack the said vacancies with "Right" people in order to control the narrative and build momentum for implementation of Modiji's central schemes. In the middle of pandemic, this could also be a way of pumping massive amount of money into the economy. Not exactly a conservative fiscal policy, but one that empowers the Right.

Else, you can expect the next non-BJP govt to stuff these vacancies with their people, which creates a headache for next 30 years
<Lurk mode on>
Top

The last two quarters of 2020-21 fiscal year were encouraging as evident by the 1.6% growth in Q4, it is unfortunate that we got hit by the 2nd wave just when the economy had begun to recover. It will be hard to predict how the next 18 to 24 months will look like not just in India but around the world. While there is a lot of pent up demand, high household savings thanks to government stimulus and lack of non-discretionary spending, there are also mitigating factors like high inflation ( our wholesale inflation just crossed 10% is now at a 8 yr high ), dispersed labor, construction cost and delays, and supply chain bottlenecks. Government is in a tough spot - spend more to make up for the lack of private sector spending and you end up worsening the inflation, spend less and combined with reduced spending by the private sector then you invite the ire of the state governments.
Top

World Bank Forecasts India To Grow At 8.3 Per Cent In 2021; Adds That It Would Be Second-Fastest Growing Major Economy - Swarajya
Top

With Forex Reserves At Record High Of $600 Billion, RBI May Bring In External Financial Consultants To Improve Yields - Swarajya via Yahoo

In a major development, the Reserve Bank of India (RBI) is likely to engage external financial consultants to manage a part of its massive foreign exchange reserves, which are now estimated to be hovering at record high levels of around $600 billion, to improve the yields at a time when the interest rates have hit record low globally, reports Economic Times.

With foreign exchange war chest growing to a size of as much as about a fifth of the Indian GDP, the RBI wants to better safeguard the reserves, given the increasing complexities of managing inflows from multiple channels.

Even in its latest annual report, the RBI had underscored that its agenda was to continue to explore new asset classes, new jurisdictions and markets for deployment of foreign currency assets for portfolio diversification, and in the process "tap advice from external experts, if required".

Select global institutions which include some of the Big Four consulting majors and financial institutions are also said to have informally reached out to RBI in this regard. However, no formal appointment has been made so far.

It should be noted that some of the prominent Southeast Asian central banks are also said to have appointed long-term asset managers to partially manage their foreign currency assets.

The Centre has allocated Rs 10,870 crore to Uttar Pradesh under Jal Jeevan Mission in 2021-22 as the state government looks to provide 7.8 million piped water connections across 60,000 villages this year ahead of the assembly polls next year.

Work under the Jal Jeevan Mission will begin in 60,000 villages in the coming days, people aware of the development said. The government will provide tap water supply in 177 arsenic and fluoride affected habitations this year, they said.

There are 26.3 million households across about 97,000 villages in the state. Out of these, only about three million, or 11.3%, households have tap water supply in their homes at present.

The state had assured availability of Rs 3,348 crore of central fund for the Jal Jeevan Mission last fiscal year, including enhanced allocation of Rs 2,571crore and opening balance of Rs 777 crore. It could utilize only Rs 2,053 crore from this fund.

Union Jal Shakti minister Gajendra Singh Shekhawat has written a letter to UP chief minister Yogi Adityanath, urging him to take necessary measures to accelerate the implementation of the mission.
Top

This number should be seen with:

1. Total debt on GoI in USD
2. Total repatriable investments by foreign companies (i.e. total USD RBI will have to give to companies willing to repatriate their investment + capital gains + profits back)

by (1) I mean the debt that GoI has to pay with interest strictly in US dollars, and not the total debt converted to USD.

This number should be seen with:

1. Total debt on GoI in USD
2. Total repatriable investments by foreign companies (i.e. total USD RBI will have to give to companies willing to repatriate their investment + capital gains + profits back)

If we check the tables we can see the evolution of India debt. It has risen since 2010 in global debt terms, when it was 1,127,257 million dollars and also in terms of GDP percentage, when it amounted to 66.04%.

The position of India, as compared with the rest of the world, has worsened in 2020 in terms of GDP percentage. Currently it is country number 157 in the list of debt to GDP and 75 in debt per capita, out of the 189 we publish.

^^ These numbers should be seen with:
1. How much of this is due when?
2. How much is internal vs external?
3. How much is payable in dollars vs rupees?
4. What is the country's annual income (inflow) in dollars? Broken down by type of inflow - export earnings, remittances, FDI, FPI, FII, other forms of foreign currency deposits, etc.
Top

The country’s total merchandise exports are projected to grow 70.1 per cent to USD 87.2 billion in the first quarter of fiscal 2021-22 from USD 51.3 billion in the year, Export-Import Bank of India (India Exim Bank) said.

Base effect drives up IIP growth in April

The index of industrial production (IIP) hit 126.6 in April, marking a 134.4% surge from a year before, driven primarily by a favourable base.

Government officials and analysts cautioned against reading too much into the latest rate of expansion, given that a Covid-induced lockdown in April 2020 had substantially hampered industrial production (IIP had crashed by 57.3%).

In fact, the government released only the index readings for April on Friday, without announcing the growth rates, as comparisons with April 2020 data are fraught with risks of erroneous interpretations.

Users browsing this forum: No registered users and 20 guests