The Technology & Economic Forum is a venue to discuss issues pertaining to Technological and Economic developments in India. We request members to kindly stay within the mandate of this forum and keep their exchanges of views, on a civilised level, however vehemently any disagreement may be felt. All feedback regarding forum usage may be sent to the moderators using the Feedback Form or by clicking the Report Post Icon in any objectionable post for proper action. Please note that the views expressed by the Members and Moderators on these discussion boards are that of the individuals only and do not reflect the official policy or view of the Bharat-Rakshak.com Website. Copyright Violation is strictly prohibited and may result in revocation of your posting rights - please read the FAQ for full details. Users must also abide by the Forum Guidelines at all times.
Post Reply
1981 posts

Amber G. wrote:I don't know all the results.. will be interesting to see how AI did in this IMO...

One question: How do they describe the problem to the AI? AI has to understand the problem just like human participants or the problem is specified in some formal language?
Top

Amber G. wrote:I don't know all the results.. will be interesting to see how AI did in this IMO...

One question: How do they describe the problem to the AI? AI has to understand the problem just like human participants or the problem is specified in some formal language?

- good or even semi-decent AI programs I tried solved them..(A iphone image of the written problem is often good enough)

sudarshan wrote:
I suspected that was the case, let me see if I can get there. That insight about "if the numbers are all even, then divide them by 2" is a good one, of course it only works because of that "x1 + 4*y" property, else it would yield mixes of odd/ even again.

Will be nice to see interesting discussion it generates.

My solution, which I thought earlier, was a little too complicated and some solution I have seen are also long.. but I have found a method which is very nice.. will put when I get some time.

So one can consider only odd numbers without loss of generality.
Top

Let's say that we have n odd numbers with the property, that the AM of any pair, can be represented as the GM of a set of 1 or more numbers from the same set. If all n numbers are the same number, we have no problem. We want to see if we can find a set of n numbers, where all numbers are not the same value, which will satisfy the condition. So in such a set, by definition, one number will be the largest, and one number will be the second largest (there could be multiple instances of the largest and/ or second largest number in the set, of course).

1. There is no number in the set larger than y.

2. There is also no number in the set, which lies between x and y (since x is the second largest number).

So there have to be at least two numbers in the set, such that their GM equals the value a = (x+y)/2.

How about x and y? Recall, the AM of two unequal positive numbers will *always* be larger than its GM. So even x and y won't work. And the other numbers in the set of n are smaller than x (x is the second largest, remember?) so they definitely won't work.

6. We need a way to "pull up" the value of the GM to be a = (x+y)/2. So we need to include more numbers in the GM calculation, which are large enough to pull the GM up. x, however, is already smaller than a, and will pull *down* the GM value. So these additional numbers can only be further occurrences of y (since y is the only number in the set of n, which is larger than a). Thus, it is necessary to have multiple occurrences of the largest number, y in the set.

Still thinking from here on....
Top

^^^ Very good. Agree with point 1 to 6.
Big Hint: Going along the line, I can think of *simpler* point 7 (and possibly 8 ) which finishes your proof.
(Even bigger hint: read *carefully* my previous post (just above yours)

Leave it at that, to see someone else or you write down the final argument.
(The problem was posed by an Estonian professor - I liked the problem)
Top

^^ I like the problem because, at first site it looks like a combinatorial problem with algebra but it is a little deeper than that.
For example if the statement was changed from positive integers to rational numbers, it will still work, but if you allow all numbers, it does not. (except for the case of only 2 numbers).

Okay here is just a pure algebra problem, simple looking, from the same contest - posting here because it is so similar to all the thinking above.

SriKumar wrote:vayutuvan- thanks for the link but right now I am still trying to wrap my mind around how the square root (!) of the product of two irrational numbers (!!) e & pi, can be exactly equal to anything

Let us modify the problem a little.

Instead of "Prove that" <equality>, make it "Prove or disprove" or "It is conjectured that" and replace the <equality> with the language of real analysis.

If that works out, then you start looking to prove it using real analysis methods, i.e. convergence of the sequence given in the LHS to a sequence that represents the RHS. Much harder. @Amber G. said "Prove that" which lets you skip the step of experimentation with large numbers and high precision arithmetic.

Not able to finish that solution, a simple end is still eluding me. I got another couple of steps further, but it's getting more complex all the time.

VT, I verified (numerically) that the series on the RHS plus that continued fraction does come to the LHS on that e/ pi problem. Now what? Expand the series for e and pi, multiply terms, mix and match?
Top

sudarshan wrote:Not able to finish that solution, a simple end is still eluding me. I got another couple of steps further, but it's getting more complex all the time.


Here it is:
Assuming we have already agreed that we have to only to consider the case when all the numbers are odd.
(If all numbers are even - or divisible by any one number for that matter - can be factored out. This was a big hint).
We already proved the case for two so let us assume the total number in the set is >2

- Let L be the largest number in the set.
- It has to be an odd number greater than 1 (else all numbers will be equal

Now same logic for L3- the next largest number.
AM of L and L3 will be larger than L3, and since L2 and L can not be included (as both are divisible by p).
L3 must also be divisible by p (remember p is an odd prime)

So all numbers must be divisible by p !!

Rest is simple - Fermat's infinite descend - Divide all numbers by p and repeat the process on this new set of numbers !!!!
Only way it can end is when the largest number now becomes 1 but in that case all the numbers now have to be equal to 1.)

QED!
(My first solution which I thought was quite a bit more complex but I like the above as it is fairly easy to understand and does not use complicated math)
Top

This is what I was missing! I got that L and L2 should both be divisible by a prime factor of the AM, but I arrived at it in a different way, and missed the first statement above.

For the second statement, I figured that all the lower numbers had to be divisible by the same prime factor, but didn't think of repeating the logic with the next largest number. So I wasn't able to prove that intuition.

^^^ Yes...
(The critical part was to see that every prime factor of L must also be a factor of L2 (and thus all other numbers)..The problem becomes a number-theory problem rather than combinatorial which was a interesting part)
Top

sudarshan wrote:VT, I verified (numerically) that the series on the RHS plus that continued fraction does come to the LHS on that e/ pi problem. Now what? Expand the series for e and pi, multiply terms, mix and match?

I saw this. I will answer after collecting my thoughts.
Top

For those who are interested in Ramanujan's work here is a current talk - from none other than Prof Ono ( Kyoto RIMS) in case you want to watch - the link will work for next 7 days..
quantum modular forms and representation theory

Thursday (In Hindi = गुरुवार - A day to honor Gurus).
Pictured here are two gurus - great mathematicians - who were also great human beings. One of them received Nobel Prize and the other was honored by "Bharat Ratn "- (the highest civilian award given by India). 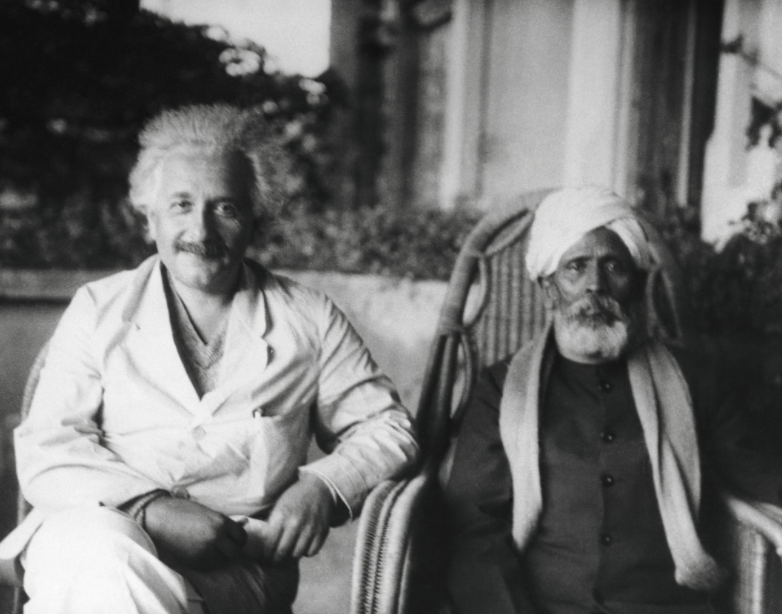 Can you identify them?

Here they are getting the honors: 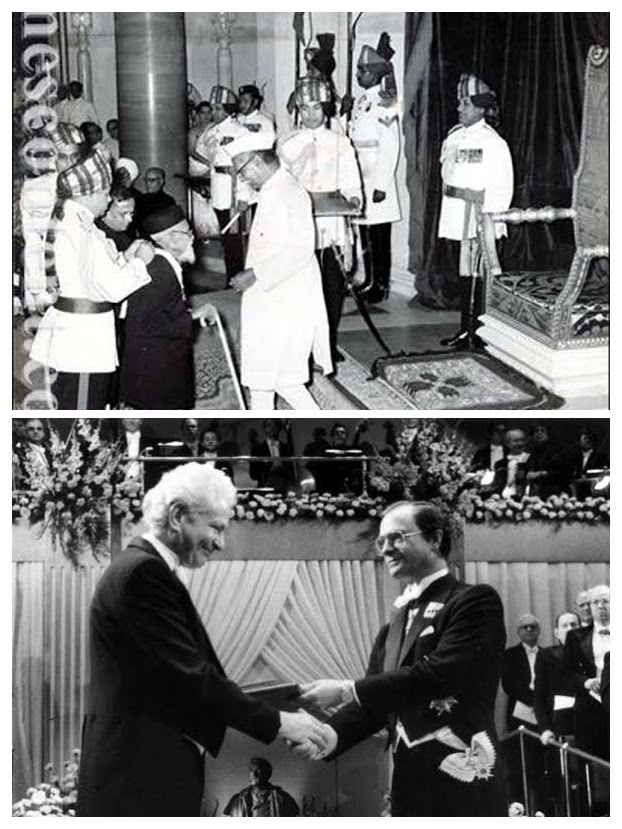 Ben Sparks explains (and codes) the so-called SIR Model being used to predict the spread of cornavirus (COVID-19).

Amber G. wrote:Thursday (In Hindi = गुरुवार - A day to honor Gurus).
Pictured here are two gurus - great mathematicians - who were also great human beings. One of them received Nobel Prize and the other was honored by "Bharat Ratn "- (the highest civilian award given by India).

Can you identify them?

Here they are getting the honors:

^^^ Yes, left of Maharshi Prof Karve is Physicist Albert Einstein. Photo (if I am not mistaken) was taken in Germany.
Top

Amber G ji, maybe you could suggest to Dr. Vidyasagar et al, that the bijaganita (tr.: algebraic; literally: "seed mathematics") terms in that supermodel could use Sanskrit aksharas instead of Greek letters. There's more than enough letters in Indian languages, and after all, the concept of bijaganita did originate in India.
Top
Post Reply
1981 posts