The Military Issues & History Forum is a venue to discuss issues relating to the military aspects of the Indian Armed Forces, whether the past, present or future. We request members to kindly stay within the mandate of this forum and keep their exchanges of views, on a civilised level, however vehemently any disagreement may be felt. All feedback regarding forum usage may be sent to the moderators using the Feedback Form or by clicking the Report Post Icon in any objectionable post for proper action. Please note that the views expressed by the Members and Moderators on these discussion boards are that of the individuals only and do not reflect the official policy or view of the Bharat-Rakshak.com Website. Copyright Violation is strictly prohibited and may result in revocation of your posting rights - please read the FAQ for full details. Users must also abide by the Forum Guidelines at all times.
Post Reply
5294 posts

"Kailash" - with all its insinuations to the Chinese
Top

Guys please add the names as replies on that Twitter thread. Putting them here is of no use.
Top

And I think a very rare shot of Rudra firing off a Mistral ATAM?

With a plan to manufacture naval utility helicopters under a strategic partnership model in the doldrums, all eyes are on a critical trial of an indigenous Advanced Light Helicopter being modified for ship-borne operations of the Navy.

A crucial trial of the folding tail boom – the aft section of the chopper – is planned by next month to demonstrate that the Advanced Light Helicopter (ALH) can easily fit into hangars and heli-decks of frontline warships, people familiar with the development told ET. The first ALH with a modified tail section as per the navy’s specifications is ready

https://twitter.com/Amitraaz/status/138 ... 52864?s=20 ---> HAL Dhruv with an Emergency Floatation System (EFS). Designed to minimise the chances that a helicopter which is involved in either a controlled ditching or a water impact sinks or capsizes as a result. Usually, inflation is provided by gas stored in pressurized cylinders which are carried onboard. The need for rapid inflation is met by the inclusion of helium in the gas but it is usually blended with other gases.

Rakesh, the first URL in the above is incorrect.
Top

SSridhar wrote:Rakesh, the first URL in the above is incorrect.

Oops! Thank You SSridhar-ji. I have fixed the link.
Top

We have a huge requirement of helicopters and yet no orders have been signed. If not actual orders at least LOI's should be issued so that HAL can start producing the units and also raise finances.
We have to leverage the size of our requirement.
LOI can be placed on HAL for all of the following:
LCH - 36 for IAF and 114 for IA with option for additional units
LUH - 387 Units, split between IAF and IA as required
ALH/NUH - 81 + option for additional 30 units (can happen only after IN approves the ALH MK3, with the folding boom and folding blades)
Besides this there is also the requirement for trainer aircrafts.
HTT-40 has already received the IOC and is expected to start LSP.
HTT-40 -70 + option for additional 36 units
There is reportedly a requirement for 36-40 units of IJT-36 Sitara as well, if the spin trials pan out.
Add an order for another 2 squadrons worth of Tejas MK1A, (along with additional 36 Rafael, this is the most logical and desired solution to arrest the decline in numbers for IAF).

Adding all of the above along with the recent order for 73 Tejas MK1A+10 Trainers, the total projected orders for HAL would be about 1.5 Lakh crores or about $20 Billion. With this kind of projected orders, with formal LOI issued, the stock price can gain significantly. Given the buoyant stock markets, it would not be too difficult for HAL to raise say about 2,500 crores from the market, by issuing additional shares. Sure this would dilute GOI's stake in HAL, but the expected share price increase would mean that value of the holding will likely remain the same or may even increase.
The funds thus generated by HAL can help it start off the production process and also upgrade the existing facilities if required. Most importantly it would not require GOI to immediately release funds to HAL, which seems to be major constraint at the moment.

A projected order book of $20 billion would put HAL in the top 5 aerospace companies in the world.
HAL should also be mandated to offload as much work as possible to the pvt. sector and work mainly as an integrator.
The production numbers required would be huge. 70-76 helicopters per annum, 24 fighter aircrafts per annum, 24 trainers per annum, plus all the upgradation work that might come about for the Su-30MKI and possibly the IOC and FOC Tejas aircrafts. This production rate would be required for anywhere between 6-10 years.
Top

Answer in link below....

https://twitter.com/DRDO_India/status/1 ... 81411?s=20 ---> DRDO has developed single crystal blades technology and has supplied 60 number of these blades to HAL as part of their indigenous helicopter development program for helicopter engine application. The supply of remaining 4 sets will be completed in due course. #AtmanirbharBharat. 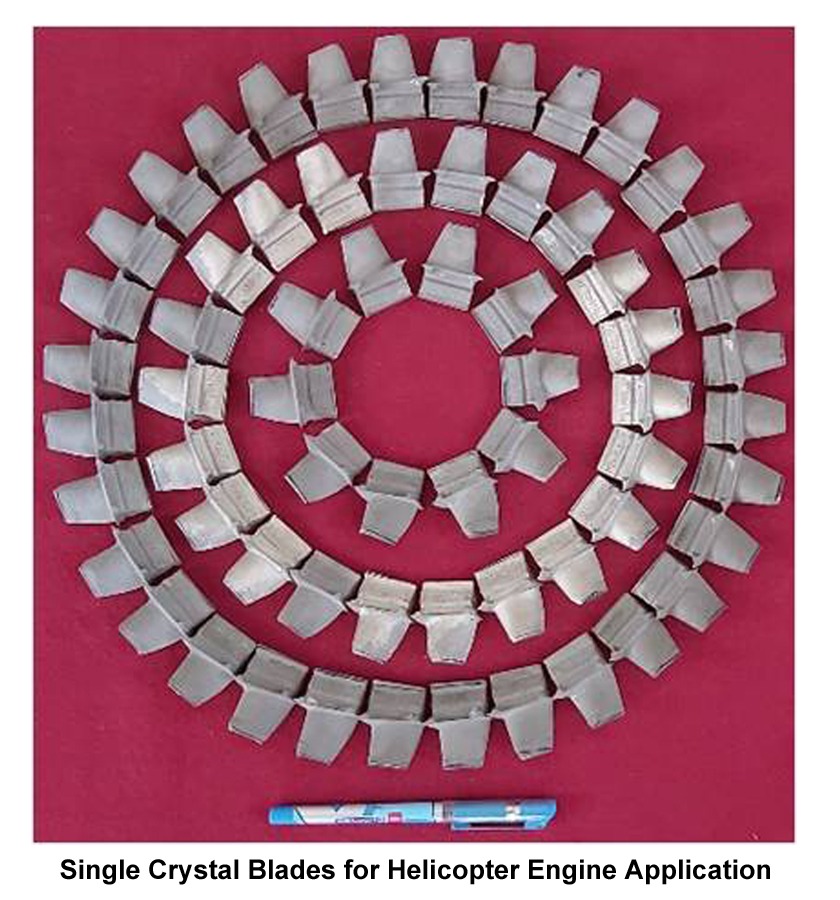 https://twitter.com/delhidefence/status ... 95300?s=20 ---> The turbine blades were made by Defence Metallurgical Research Lab (DMRL) and 4 more such sets will be delivered in due time. DMRL has also developed single crystal blades made from Nickel alloys for the indigenous jet engine program. 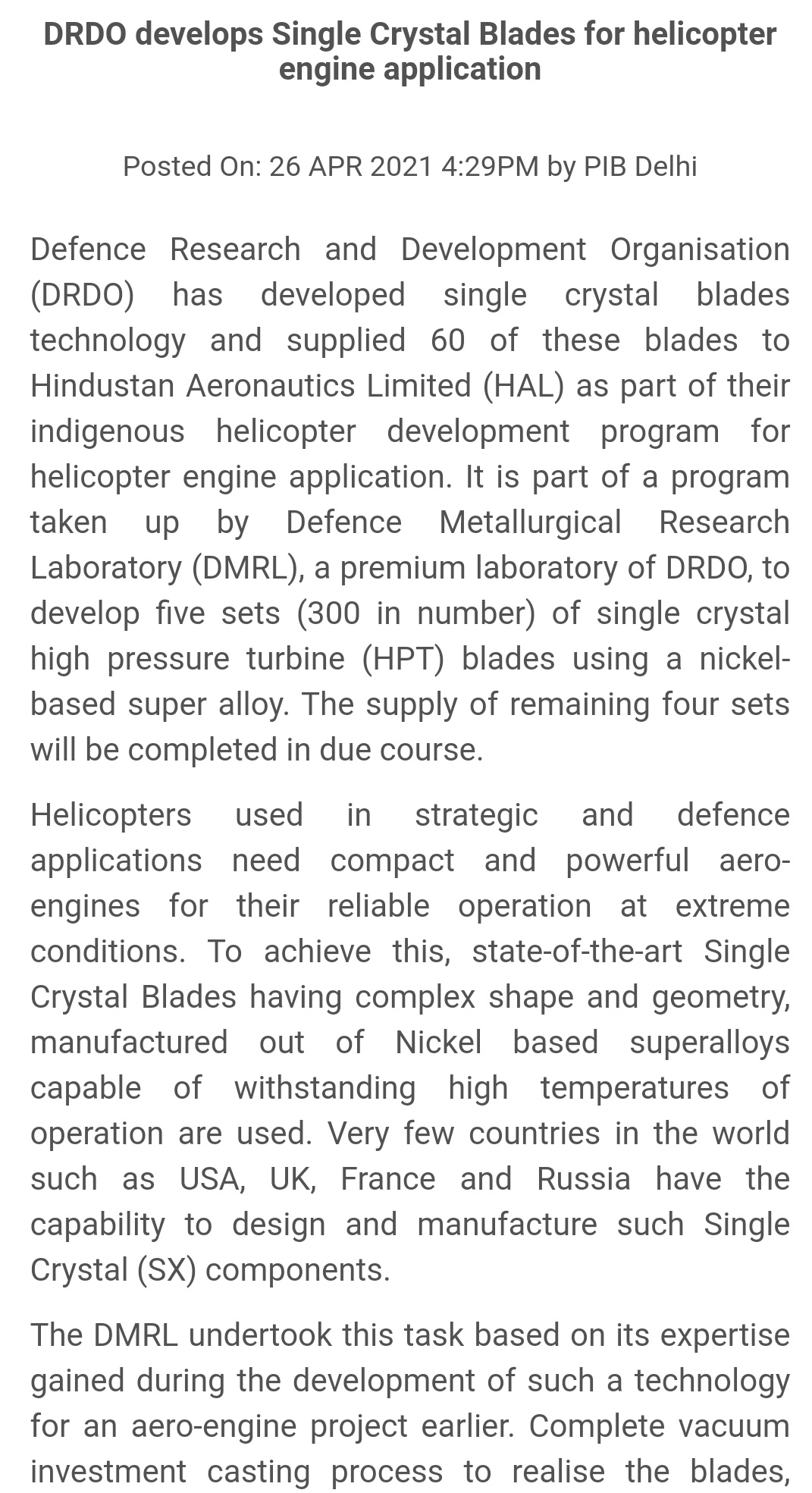 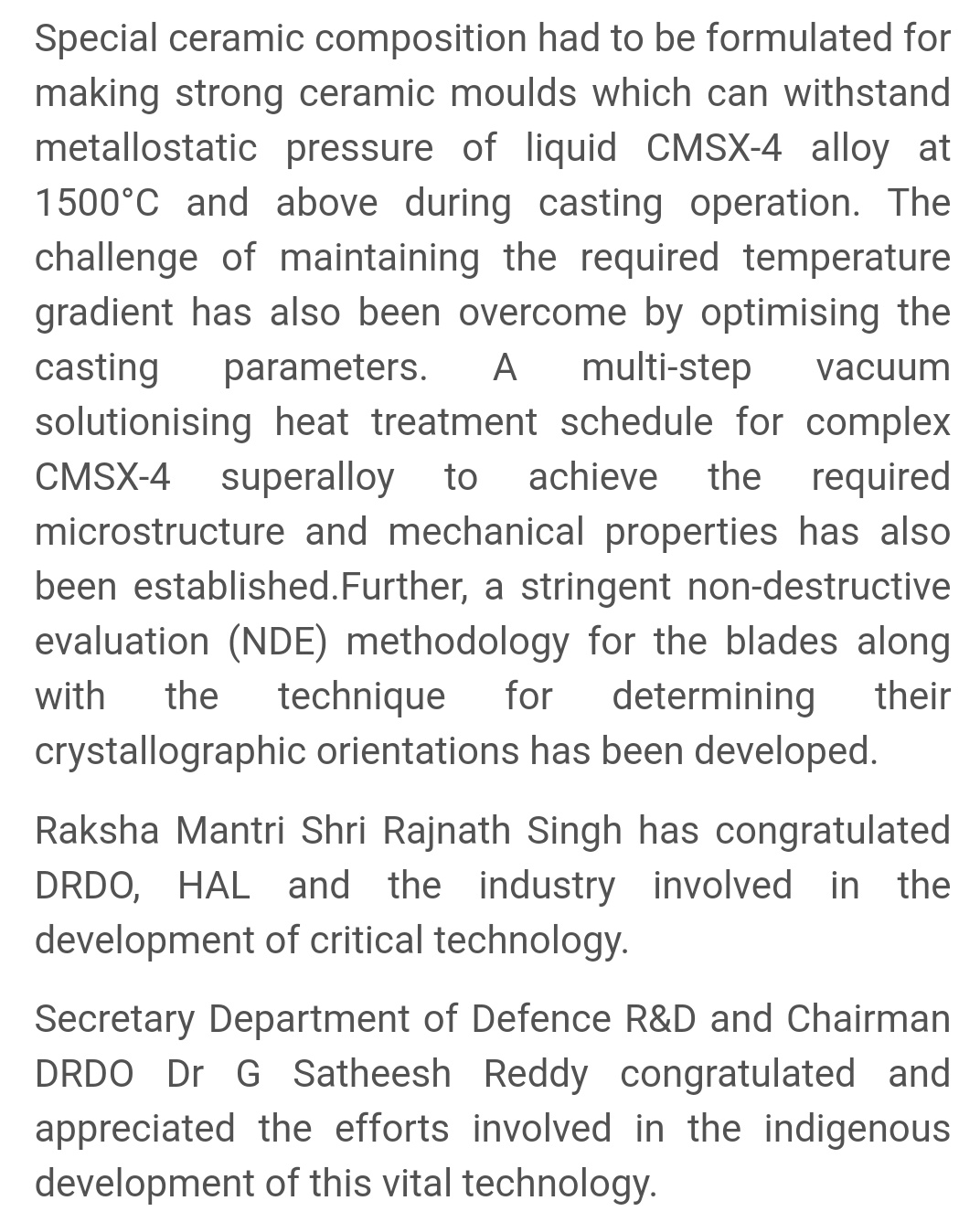 ICG ALH landing on a Ship

Users browsing this forum: No registered users and 57 guests