This is truly something to be proud about. A programme on the liberian all female unit from India
http://www.veoh.com/videodetails2.swf?p ... id=1488866

The commandant is tough

covers training, deployment as well as raids carried out by them

Who is the photographer for these two images?
Top

Who is the photographer for these two images?

I didnt get any leads in the website itself, so I've asked the webmaster of deagle.com i'll let you know when he replies.

and btw can anyone give some links for high res close-ups of Dhruv, especially of its tail rotors and engines/main rotor

Shivji: Re. the Maratha LI videos posted by you

What year/era are these from ? Are these privately circulated videos (or from defence libraries) or recording, say, from Doordarshan ?

The main reasons that I ask are:
- the SLR simulator and indoor firing range
- the hit recording system, shown in the field exercise

Question to gurus: How widespread are these in IA regimental centres ?
Top

American chopper crew recounting being shot down over Baghdad:

Geez, the interviewer seems a bit pushy, cutting them off all the time. She's just a little too cheery.
Top

The second video might take a lil while to get processed

Thanks Jagan. Please do post the joint defense doctrine, whenever it is released to the public in as many threads as possible. Do not want to miss it. The second one is still not up.....waiting...
Top

Life in NDA - a series of 8 videos
http://www.youtube.com/results?search_q ... da&search=
Top

Life in IMA - a series of 7 videos
http://www.youtube.com/results?search_q ... hv&search=
Top

You can see the NYT's blatant propagandism here.

When the same NYT talks about Europe, then they go out of their way to downplay the record of European fascists states in WW2, taking pains to emphasize that remembering European fascism only serves to undermine the memory of what was suffered under the communist oppression that followed.

Read the NYT regularly -- and I do -- and you'll see that this is a recurrent theme with them on this topic.

So there is a blatant double standard to which European and Asian nations are held, when it comes to war crimes. And this is due to ATLANTICISM and the ATLANTICIST BIAS of entities like NYT.
Top

I came across this recent video:

Seems like a cool idea. Could it be further developed for use by special forces, or something?
Top

Anyone seen this yet?

It's called the Gryphon, a man-portable jet-wing:

It's being developed by ESG for special forces applications.
It has a gap in which the pilot's parachute fits in.
Top

Thats a MKI being built at Irkutsk IIRC.
Top

Video of the assassination attempt on the late PM Rajiv Gandhi in Sri Lanka
During the Guard of Honor the sailor tried in a desperate attempt to kill him with the bayonet. Quick action by One of the Officer and one of the security guard's saved him on that day.
http://www.youtube.com/watch?v=oP4nGOI8wBY
Top

uddu wrote:Video of the assassination attempt on the late PM Rajiv Gandhi in Sri Lanka
During the Guard of Honor the sailor tried in a desperate attempt to kill him with the bayonet. Quick action by One of the Officer and one of the security guard's saved him on that day.
http://www.youtube.com/watch?v=oP4nGOI8wBY

DD has a better view/video. The Guy didnt try to 'kill him with bayonet' , he actually reversed his rifle to use it like a club 'to whack him on the head'.

For some strange reason Rajiv Gandhi also walked too close to the guard of honour, weaving in and out of the first and second parts of the contingent (usually a row of solders with a single officer standing in front) and he went behind the third officer - it was almost like, 'here I come, please whack me'

. It was so strange that even India Today did a small piece on that complete with a diagram on how he walked at the guard of honor..

The rifle hit him on his shoulder - only his reflexes saved a split head that day. The security guys then charged the assailant - india today mentioned that all the security guys were on top ofthe sailor and if he had had an accomplice, it would be a different story..
Top

Jagan wrote:The rifle hit him on his shoulder - only his reflexes saved a split head that day. The security guys then charged the assailant - india today mentioned that all the security guys were on top ofthe sailor and if he had had an accomplice, it would be a different story..

In an interview after that incident Rajiv Gandhi said that he saw something coming out of the corner of his eye - perhaps a reflection from the aviator shades he was wearing, and that helped him react.

I saw the report on the BBC in the UK and it was shown as a humorous tailpiece indicative of the monkeying around that ex-colonial governments get up to. The announcer has a big grin and said "Coming up - presenting arms with a difference"
Top

Jagan wrote:The security guys then charged the assailant - india today mentioned that all the security guys were on top ofthe sailor and if he had had an accomplice, it would be a different story..

Even at that time, I thought his proximal security team did a good job in prioritizing the threat, isolate him real fast and form the phalanx? Even the video shows that at the very end. Only the designated "grappler" bought down the assailant. So an accomplice *might* not have found it that easy to follow through.

btw, I too never liked the idea of him walking so close to those dudes who were never happy with us, that too without his proximate team.

And another curious thing in the video is the VIP briefcase. MP5 or "Football"?

A Sharma wrote:Hope somebody can record this.

The Discovery channel recently produced a programme featuring Indiaâ€™s first indigenously designed plane SARAS. The programme will be telecast on 16 August 2007 at 8.00 pm. This will be part of the programme titled "Daily Planet Goes to India" which explores and interprets science and technology driving Indiaâ€™s development, from grassroots innovations to moon missions.

Last week, the military newspaper Navy Times revealed that the online mapping site Google Earth carried a satellite photo that showed the exposed propeller of a U.S. nuclear submarine in drydock. The propeller is considered to be highly sensitive military technology.

from the ayatollah blog 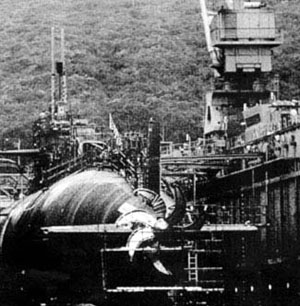 shyamd wrote:Video's of the GSLV F-04 from start of the day till the end with all the interviews.

OK here it is.

Launch, right up to shut off of stage 3 and separation of payload.

It might be interesting to open a new thread to see some of the videos of real time targeting / firing (from Iraq/Afghanistan). Very enlightening to see how fast authorization is requested and cleared to take out targets of interest.

Video of the AC-130 Gunship over Afghanistan targeting people and cars.
Top

Some U.S. Marines, pinned down by an insurgent sniperon top of the building decided that theyd had enough of an Iraqi sniper. They marked this location with a smoke grenade and called for close air support.

Excellent video of a 2000lb JDAM bomb in action

Old video of an F-16 taking out 30 insurgents

Arabic news media challenged that these weren't insurgents but a wedding procession. Nevertheless it takes all of 10 seconds from requesting authorization to deploying the weapon and another 10 seconds thereafter.
Top

Viral video of the apache helicopter in action taking out four iraqis. I'll try and find the full video which is more interesting. The pilot sees one of them throw something that looked like a weapon in the field. He requests authorization to engage the target before weapons free.