The Military Issues & History Forum is a venue to discuss issues relating to the military aspects of the Indian Armed Forces, whether the past, present or future. We request members to kindly stay within the mandate of this forum and keep their exchanges of views, on a civilised level, however vehemently any disagreement may be felt. All feedback regarding forum usage may be sent to the moderators using the Feedback Form or by clicking the Report Post Icon in any objectionable post for proper action. Please note that the views expressed by the Members and Moderators on these discussion boards are that of the individuals only and do not reflect the official policy or view of the Bharat-Rakshak.com Website. Copyright Violation is strictly prohibited and may result in revocation of your posting rights - please read the FAQ for full details. Users must also abide by the Forum Guidelines at all times.
Post Reply
3678 posts

I thought so. But I explained in detail, just to provide clarity to others. Regarding the height there is also the possibility of dropping just the aisle portion by 6" or so to make a "(--__--)" to give even more head room in the middle, without compromising the maximum width available for placing the seats.
Top

Nice idea about the aisle floor being lower. Wonder if that is actually the case. With the sideways seating, that will not be possible.

Also, I don't know about others but I feel sick when traveling sideways. I know the paratroopers often do it, but forward facing seats are always advertised.
Top

indranilroy wrote:I think putting the equipment on one side is easier for means of wiring. But isn't it detrimental for the CG?

Seat placement has been arrived at as per IAFs requirement and with fine tuning from Embraer based on CG considerations.
Top

Having said all that ... why do people go for the side aisle then?
Top

embraer has a range of bigger jets. does anyone think going for the next bigger plane would have been more optimal ?
the EMB145 is their biggest small jet. the next up belongs to their E-jet series and is E-170. has a 3000km range and 70 seats, so much roomier compared to the EMB145.

in India, paramount airways is flying this aircraft. you can see the interior here
http://www.paramountairways.com/experience.html

but I guess EMB145 was the quickest soln because embraer already had the design and exp in hand from Ereyie project.

hope they come up with a more powerful radar and more onboard console for Phase2 of the project and choose the EMB170 or bigger.
Top

AASU unit is pretty big. Is it the same one shown on EMB model in the picture or will it be used on next batch of AEW&C aircraft?
Top

Not a guru, put some of my thoughts...
Gulfstream G650 is indeed a potent plane that could replace Embraer 145SA variant (assuming ready test data and research for fielding Phalcon RADAR in Gulfstream G550 holds good for Gulfstream G650 as well).

The only catch is that the India's solution was somewhat similar to the erieye configuration (placing the radar on top of the fuselage) whereas for Gulfstream, the RADAR is mated into the fuselage itself. I am not sure if india would be willing to have that kind of radar placement solution (owing to commonality).

So India had only couple of options to start with for a fast solution, Saab based AEW or Emb 145 (as they already field Erieyes and the relevant studies have already been done). At the end India chose Emb 145 as it had already purchased them for BSF and VIP transports. Atmost a custom militarized version of Embraer ERJ 145XR could be taken into consideration. The range though is very less in comparison to the Gulfstream G650. Alternatively India could approach for the recent Embraer Lineage 1000 (if quick solution could be provided similar to Emb 145)

ERJ 145 due to its large internal volume when compared to Gulfstream 650 allows you to carry a spare set of crew either for extended missions or for training purposes. This rest area would be missing in smaller business jets like gulfstream. Given inflight refueling options, the secondary coverage role and the probable location of deployment (within indian territories), this is a pretty good platform for our needs. For training purposes, they can easily jury rig secondary *display* consoles for new crews to be in the rest area and shadow the main consoles. We don't need gold plated platform for every role. We are getting AEW's and that alone will change the way, we *may* fight if ever. 5-6 phalcons and 10 of these AEW's are good enough for us. We will probably be the largest operator of AEW outside of USA after this acquisition.
Top

our next set of desi AEWs is not going to be based on EMB-145 and I expect a larger platform to be chosen.
Top

Rahul M wrote:our next set of desi AEWs is not going to be based on EMB-145 and I expect a larger platform to be chosen.

3. no news on next platform.
Top

Rahul M wrote:3. no news on next platform.

But there is news item which says that this platform only for next 3 AEW's?
Top

indranilroy wrote:Having said all that ... why do people go for the side aisle then?

But there is news item which says that this platform only for next 3 AEW's?

it appeared during or just before AI. difficult to locate it in the info storm. I'll try.

edit : sorry, no luck so far. the main problem is the project has no formal name and search strings return irrelevant results.

it was a comment by a DRDO honcho either from CABS or even higher up about future path of their AEW&C, he mentioned clearly that EMB-145 will not be the aircraft of choice.
Top

Thanks Rahul. No worries. Whenever you run into.
Top

ERJ-145's are great airplanes. Having personally worked on them, I vouch for their fantastic seat/mile operating costs, sturdy structure, short field performance and handles well in the harshest of weather. (-20> C) Very minimal ground support equipment required, to operate this baby.
The low wing can give you a good bump and gash on the head, if you don't watch where you're going, while working on it, for the SDRE types like myself and the RR-AE 300 series engines sometimes go into heavy PMS mode, with relay errors. There's no way you can get around this without opening up the cowling and doing diagnostics, which are time consuming and can cause standard 2 hr delays. But still dispatch reliability is greater than 92 percent. Wise choice over all by the IAF. Brazil is a far away place though, for parts support unless they have a distribution centre closer to home.
Top

But there is news item which says that this platform only for next 3 AEW's?

it appeared during or just before AI. difficult to locate it in the info storm. I'll try.

edit : sorry, no luck so far. the main problem is the project has no formal name and search strings return irrelevant results.

it was a comment by a DRDO honcho either from CABS or even higher up about future path of their AEW&C, he mentioned clearly that EMB-145 will not be the aircraft of choice.

DRDO AWACS First Batch Delivery by 2015; Embraer EMB 145 May Not be Base Platform for Second Batch

thanks ! seems I was mistaken about EMB-145 NOT being the choice. they might still chose it again.
Top

Mr. Vivek Lall confirmed in an interview to Press Trust of India that the American defense and aerospace major has briefed the Indian Air Force and Indian Navy of the B737-700 AWACS platform in response to a Request for Information (RFI) issued by the Ministry of Defence.

"Boeing has briefed the Indian Navy and the Indian Air Force about Airborne Early Warning and Command (AEW&C) aircraft on the basis of Request for Information (RFI). However, no Request for Proposals (RFP) has been issued as yet."

While briefing media personnel in Bangalore on the eve of Aero India 2011, (Retired) Commodore Gyanendra Sharma, Managing Director of Northrop Grumman India announced that the Ministry of Defence has sent a Request for Information (RFI) for E-2D Naval Airborne Early Warning aircraft to Northrop Grumman.

As per details given by Mr. Sharma, Indian Navy has shown interest in procuring at least four such aircrafts.


Aren't we buying are atleast considering to buy almost everything that is available (kid in a candy shop?)... Shouldn't we standardize on say one small platform and one large platform to maintain interoperability, commanility, ease of maintenance, cross trainability and all the good stuff. Can gurus shed some light on this?

or is RFI just a way for understanding the capabilities of their system and turn around build our own version of it...
Top

E2D has the advantage of going into IAC-2 in a decade's time *IF* we go the EMALS/steam cat way and in the meantime operate for 5 yrs from land bases. con is lesser transit speed and range and less power/onboard controllers.

the B737 MESA has the advantage of being faster, more powerful and roomier but obviously land based only. it will have good long range search capability because australia has gone for it and northrop grumann is a world leader in phased array radar techs

in my opinion, its best the navy goes for maybe 10-15 land based AEW based around the EMB1000/G550 (phase2 of the current project), maybe with some additional optimizations and 4-6 E2-D for the IAC2 air wing.
Top

The US is desperately trying to sell us whatever junk it can,which will shortly go out of production.The E-2D will not come "fully loaded",and as a land-based platform is vastly inferior to the Embraer CABS AEW system.It would be worthwhile comparing the two aircraft on this thread and sending the same to the DM/CNS,especially as indigenisation of defence weapon systems is the acknoowledged holy grail of India,recently enunciated by the DM himself.

Ideally,the nation need a holistic integrated AEW system that includes LR aircraft like the Phalcon AWACS,smaller AEW CABS/Emb.,airships ike the Grumman/Northrop,long-endurance UAVs and a string of land-based radars around the coastline on the mountain tops W/E Ghats and in the Himalayas.At sea aboard our carriers and warships,AEW helos and UAVs will suffice until larger carriers capable of carrying larger extra-long endurance stealth UAVs are available.
Top

Video showing seating arrangement in the AEW (has this not given a name ?) on tarmak.
Top

Rahul M wrote:thanks ! seems I was mistaken about EMB-145 NOT being the choice. they might still chose it again.

No you are not mistaken. However, we don't know what holds in future. EMB + ERJ's in defence and private may be the reason why it might be chosen in future. Due to avaliablility of the type in numbers and associated servicing infrastructure, the ERJ was chosen at the first place.
Top

Can't wait for the unveiling of the CABS DRDO AEW&C. It was speculated to happen today.
Top

I am not sure how much to trust some of these web sites, but here is one (of many) that has such news:

dated Jan 15, 2011 wrote:IAI also offered the Gulfstream G5 based EL/M-2085 Conformal AEW (CAEW) which can remain on a mission for 11 hours, but deemed too costly for the Indian requirement.

PratikDas wrote:Can't wait for the unveiling of the CABS DRDO AEW&C. It was speculated to happen today. 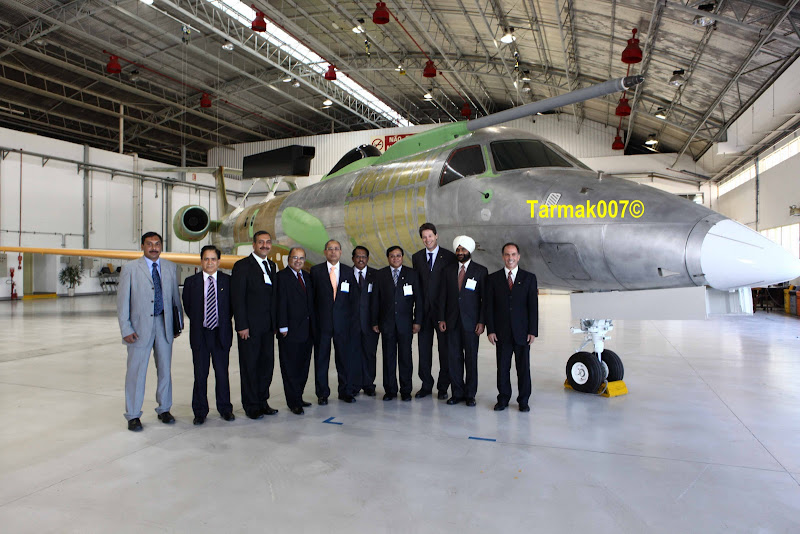 Its a beauty!
Top

I am currently reading "Descilpe", authored by Stephen Coonts. He mentions a unique system called "ALQ-199" that makes US Navy's Hornets invisible to the Iranian radars. I just want to ask some Gurus whether this system really exists or it is a mere imagination of the author? If this is true that US has this system for their Hornets, why is US not pitching the Hornets to us equipped with this system under MMRCA deal? PLEASE THROW SOME LIGHT ON THIS ASPECT.
Top

I will get you some images I received. Please wait for some time.
Top 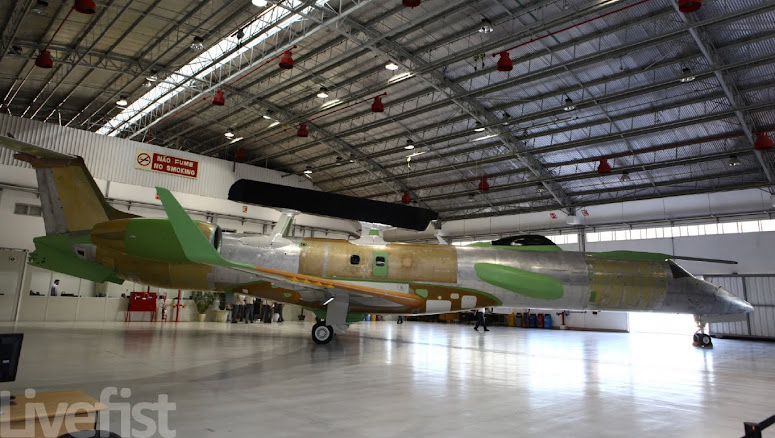 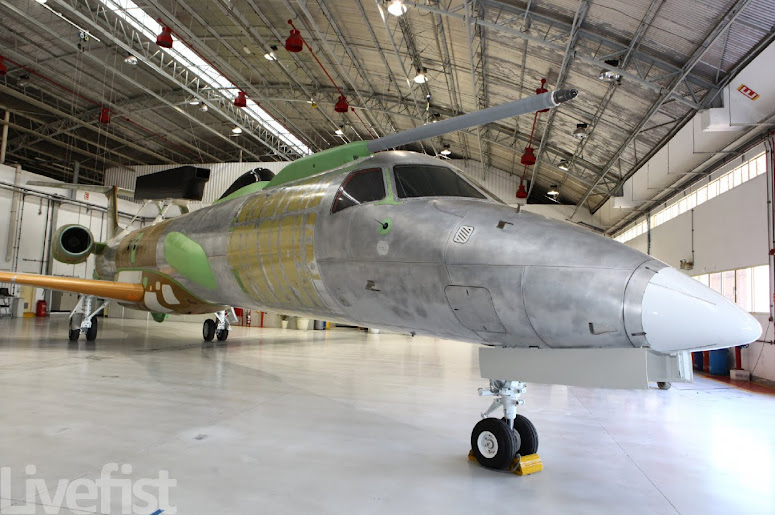