^
Thanks prasannasimha! Nice graphics and info. As good as the ISRO facebook page is, and prompt and accurate as their responses to general queries from the public are, there is an irritating absence of detail on a day-to-day basis. Laymen( particulary this layman

) want to know: the distance that MOM has travelled so far, updated every day, even twice a day;
the distance of MOM from the earth; the distance from the Sun; the distance remaining to reach Mars. This is hardly esoteric information, it's something the public can understand, relate to, and be excited about.
Top

Varoon,I don't know if any space agency gives continuous information.Most of the so called "real time" sites are just giving extrapolated data.There have been requests for a count down clock of some sort(They had put one for the launch).
At least now we are getting some information. Previously even this was not there so it is indeed an improvement. I suspect that they have deputed one interested scientist to write on their facebook page so he may be posting whenever he can.

Problem now is that it is a 300 day trip so they may only give updates during a trajectory correction maneuver.
This is an example of extrapolated data

...
"We have already spent 470 kilogram of the bio-propellant we are carrying. However, we have not overspent,despite the glitch that we encountered during the fourth burn (while circling the earth. We are well within the nominal limit of spending," said AS Kiran Kumar, a senior scientist working on the Mars Orbiter Mission (MOM) and the director of city-based Space Application Centre (SAC), an arm of ISRO.
...
The senior ISRO scientist said that indigenously developed Ceramic Servo Accelerometer (CSA) that measures the precise amount of velocity the satellite gains when the thrusters are burnt have "enabled in preserving the fuel on-board." This CSA on the MOM is an improved version of the one deployed during the Chandrayaan Mission.
...
...

...
“The project is not yet approved. But we are planning a second mission to Mars with a more powerful launch vehicle in two years. The GSLV will be ready by then and also the GSLV Mk-III version,” he said. The second mission, unlike the first, will have a lander. The final clearance to the mega project will depend on the feedback received from the Mars Orbiter Mission (MOM) which is on its way to the Red Planet at present, he said. ISRO had to be satisfied with a modest payload on MOM as it had to depend on the Polar Satellite Launch Vehicle (PSLV) for the mission’s launch. A prototype of the crew capsule that will be used for ISRO’s future manned space flight will be tested aboard the GSLV Mk-III, the heftiest rocket to be built in the country, before April 2014, he said.
...
Top

A Datewise chart showing how far is MOM ( in Million Kms ) is reproduced here from http://indiaspaceactivity.blogspot.in/2013/12/mangalyaan-mom-mars-orbital-mission.html. 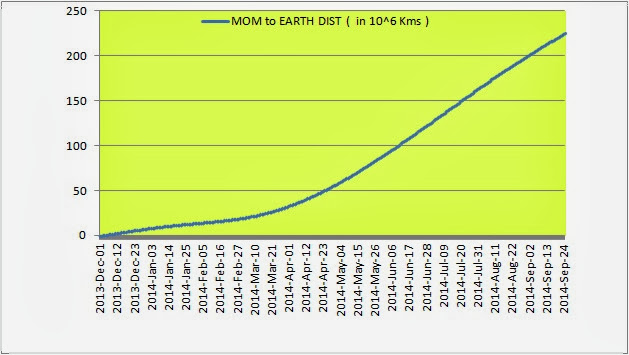 SkyLark: "While MOM's distance from earth is now 11.04 million km, it has actually traveled more than 120 million km."

So the distance between Earth and Mars seems to be fluctuating since their orbits are not 'even' with one another(?).

But the total distance travelled in the heliocentric orbit is an amazing 120 million km!
Top

I hope we can seriously work on a nuke engine.

Varoon the paths are two ellipses so the distance fluctuates.If you see SSalvi's diagram you can see the sudden spurt in distance after April 2012 - this is because we would have crossed the perigee points of the two orbital paths (earth and mars) so there will now be a huge difference accumulating though the speed of the probes will remain constant.
Top

Saik we need the RTG's to power systems when sunlight is insufficent to activate the solar panels or when there is a along period of "night" that cannot be compensated by on board batteries.Of course we need to work on this but with our current missions it would not be needed.When we plan things to the big gas giants and beyond we will definitely need them. It should not be a big problem for our nuclear industry to produce them if needed.
One problem is the potential radioactive pollution that can occur if the space craft carrying an RTG fails and explodes.This has caused a lot of demonstrations even in the US related to accidents with radioactive materials in rocketry.

Added a figure explaining the difference in ' Distance between Earth and MOM' and ' Distance travelled by MOM ' towrds the end in my blog http://indiaspaceactivity.blogspot.in/2 ... .html#more
Top

A good figure about distances.. from https://www.facebook.com/isromom by Skylark More

Good Article by Sarita Rai in NYTimes.. Finally some pointed repostes to the poverty before space argument
Top

^^^(xpost in other thread) ...For those who criticizes about space programs in " a country starved of even basic necessities like clean drinking water and toilets" and condemn the Mars mission as nothing more than showing off...

Here is a quote from Mr. Narasimha, the aerospace scientist according to NY Times:

If the Mars mission’s $75 million was distributed equally to every Indian, they would be able to buy a cup of roadside chai once every three years,” said Mr. Narasimha, the aerospace scientist, referring to the tea that many Indians drink.

“My guess is that even the poorest Indians will happily forgo their chai to be able to see their country send a rocket all the way to Mars.”

The whole story is quite interesting ..

All health parameters of the Mars Orbiter Mission are normal and a mid-course correction manoeuvre is likely to be carried out in early April, according to S. Arunan, Project Director, Mangalyaan.

“The second of the four trajectory correction manoeuvres will be made, probably on April 9, to make minor changes that may be required owing to the solar radiation pressure on the spacecraft,” he told journalists here on Saturday, on the sidelines of Probe-2014, a symposium at the National Institute of Technology, Tiruchi (NITT).

The mission boasted several new technologies, and the onboard autonomy was an important feature. Since there would be a communication delay in view of the long distance involved, the autonomy enabled the spacecraft to take decisions on its own. This option could be incorporated in the future missions of the ISRO as it would help to cut ground complexities and improve the reliability of satellites, he said.

The success of Mars Orbiter Mission, he said, enhanced the image and brand of the country in space technology. The ISRO proposed to bring India’s science laboratories under a wider umbrella to develop scientific payloads for more elaborate studies and investigations on planets, even possibly for a landing mission.

Later, in a presentation at the symposium, hosted by the Electronics and Communication Engineering Association of the NITT, Mr. Arunan said the Mars Orbiter Mission proved the country’s capabilities in deep space communication, navigation, mission planning and management.

why the mission duration was fixed at 300 days?
Top

How is the tracking done?

Sirs, Can some one explain how the MOM is tracked enroute to Mars without any GPS with such precision?Can a star tracker do this?Wouldn't dust/meteor/asteroid/bright light from a star explosion make it difficult to use?
Top

Re: How is the tracking done?

ray_donovan wrote:Sirs, Can some one explain how the MOM is tracked enroute to Mars without any GPS with such precision?Can a star tracker do this?Wouldn't dust/meteor/asteroid/bright light from a star explosion make it difficult to use?

For ranging etc they use Delta Dor
http://en.wikipedia.org/wiki/Delta-DOR

Any news about orbit correction yet ? It is 9th April.
Top

^
Since Mangalyaan is doing very well and in an excellent trajectory, no course correction at this time was required.

MOM has travelled half the distance to Mars. Which means it has gone about 340 million km.
Top

The 244 days are required if we use Solar Gravity alone ( no other active driving force .. thus no fuel is used and mission becomes very efficient ) to traverse the distance between Earth and Mars wherein the spacecraft acts as if it is a solar planet with an orbit of high eccentricity ( 0.2 ) and inclined to Ecliptic @ 2.22 deg.

Of course there are other possibilities also ( NASA's MAVEN is also taking a similar but not same route .. Inclination = 2.02 deg. ). It was launched on 18th Nov ( directly in interplanetary orbit .. no Earth orbits like MOM ) and reach Mars on 22nd Sept 14.

Incidentaly .. the reason why both missions using the same time frame is that 4th April 14 is the shortest distance between Mars and Earth .. next oppertunity for such a situation is 26 months later.
Top

A Trajectory correction is announced:

Based on Kakarat's post dated 30th Nov ( The 440 N Liquid Engine has commenced its 23 minute long firing for Tran-Mars Injection.

This will impart an incremental velocity of 648 m/s consuming 198 kg of fuel. ) this correction should consume about 2.2 Kgs of fuel.
Top

fingers crossed and a prayer on my lips.
Top 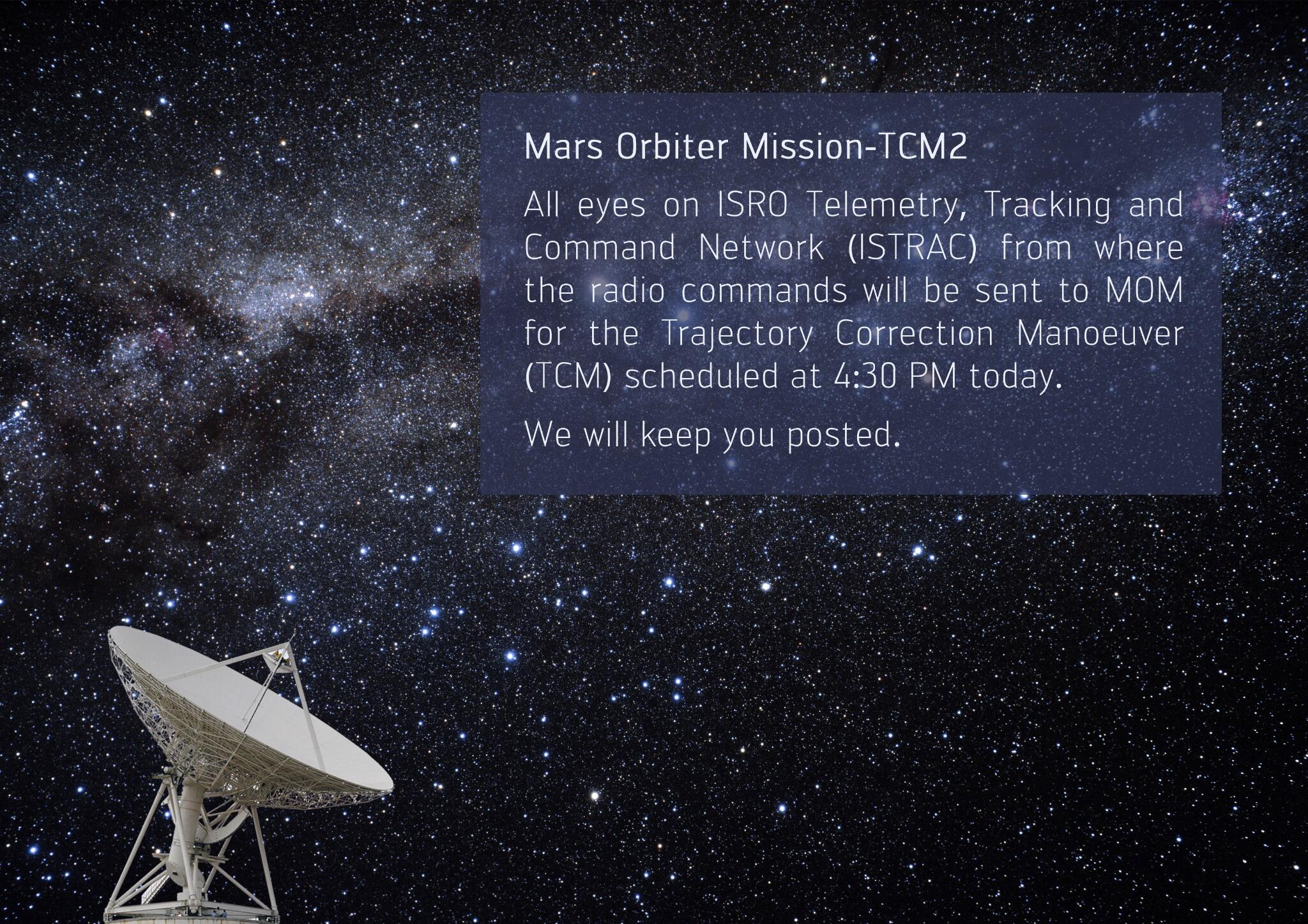 A missive from MOM confirms the TCM2-Firing completion as planned. Team MOM is busy crunching numbers to determine the post-TCM2 trajectory.
Top

The passage of a comet, Siding Spring, will be the first astronomical event that the Indian Mars Orbiter Mission (MOM) spacecraft or 'Mangalyaan'...
The comet that is scheduled to fly past the red planet on October 19 could pose a potential threat to the survival of the orbiter.
"After the spacecraft is captured in the Mars' orbit, we will encounter the Siding Spring comet that will engulf Mars in October," said AS Kiran Kumar, director Space Applications Centre, Indian Space Research Organisation (ISRO) while talking about the spacecraft that is scheduled to enter the orbit of Mars on September 24.
In a spectacular event on October 19, the MOM will encounter comet Siding Spring, that will come closer to the Red planet than any recorded comet has ever passed Earth. The comet was discovered in 2013 by Robert H McNaught at Siding Spring Observatory.

Mangalyaan on track, no path correction in August

With just two months before India's first mission to Mars arrives at its destination, the country's space agency has announced a second mission to launch between 2017 and 2020.

The mission would be in addition to a one to the Sun planned for launch in 2017 and is a signal of India's ever-growing ambitions for space exploration....

someone please take the keyboard away from Rien
Top

Let us hold our breath until orbital injection is successful. Until then lets not start celebrating.
Top

Fu(k this shite...post deleted. BRF won't be to blame