On the Evening of January 17, all the eight numbers of 22N thrusters were fired for a duration of 431 seconds, achieving a velocity difference of 97.5 m/s. This has resulted in a new orbit for the MOM spacecraft, which completely avoids eclipse up to September 2017. About 20 kg propellant was consumed for this manoeuvres leaving another 13 kg of propellant for its further mission life.

The spacecraft health is normal. The next long eclipse period for MOM is expected in the year 2020.

^
it does look to the lay viewer, that the apogee of Mangalyaan's new orbit, is lower than the previous orbit. Which is good thing, right?
Top

^ More circular and tilted towards Sun. Mangalyan will be in this orbit for a while to come and will provide an excellent referential point on various aspects of its engineering design and components.
Top

On the Evening of January 17, all the eight numbers of 22N thrusters were fired for a duration of 431 seconds, achieving a velocity difference of 97.5 m/s. This has resulted in a new orbit for the MOM spacecraft, which completely avoids eclipse up to September 2017. About 20 kg propellant was consumed for this manoeuvres leaving another 13 kg of propellant for its further mission life

Assuming no other orbit maneuvers were performed after Mars orbit insertion, this means that the Mangalyaan's thrusters were fired/activated after a gaps of 2 years 4 months in cold space. That's some reliability for the entire system. Also, I am assuming in this case, the dynamics of this craft would be quite different and more tricky with the antenna and solar panels all deployed (vs the earth orbit raising maneuvers and Mars orbit insertion maneuvers where the craft was not fully 'open').
Top

Wouldn't those thrusters be fired every time the spacecraft is about to make an orbit around the planet? For 'correction' purposes?But it is certain that not all of them are ignited so it is still very impressive that they all came "alive" after a long dormancy
Top

No everybody keeps its state of rest or motion unless acted upon by an external unopposed force and the only need for thrusters is to correct the attitude. Even when dead MOM will be circling mars for centuries though it will not be able to orient its antenna to transmit data.
Top

Few short comments wrt to comments like "apogee of Mangalyaan's new orbit, is lower than the previous orbit -(Which is good thing, right?) " or "More circular and tilted towards Sun". (What does one really MEAN by "lower" or "tilted towards Sun ?).. I may put some short post later to clear some basic information and geometry.

But practically speaking eclipses are almost unavoidable -- at least one or two every martian year (about 1.9 years) -- unless one spends fuel to reorient the orbit. One can try to make them shorter and less often and that is what one tries to do using what fuel it can use. Lot of thought goes into it and they considered everything to keep this minimum for at least a year at the time of MOI.

The other orbit parameters of Inclination, Right Ascension of Ascending Node and Argument of Perigee were selected after a detailed analysis to meet the following Mission constraints:- maximum eclipse period should be less than 100 min; imaging of Mars full disc from apoapsis region should be possible from Day 1 after MOI; orbit periapsis altitude should be stable at least for one year considering all the perturbative forces. The achievable range of Martian orbit inclination values were found to be from 29 deg to 151 deg in Mars IAU frame of reference, since the declination of the V-infinity of the Mars arrival hyperbola was -29 deg. Seven orbits, two direct, one polar and four retrograde orbits were targeted in the maneuver design and studied with respect to the delta-V cost of achieving the orbit, the sun-orbit geometry after MOI, the eclipse characteristics, orbit stability and imaging opportunities. The star sensor mounting configuration requirement and occult management was also studied for each of the orbits. The retrograde orbit of size 500 x 80000 km, with 151 deg inclination, ascending node of 61 deg and argument of perigee of 206 deg, was found to be the most suitable orbit satisfying all the specified constraints as well as from the viewpoint of star sensor mounting and management of star sensor occults.

Hey, it's worth mentioning that today/early tomorrow( Sept 24)) marks 3 years that Mangalyaan/MOM has been in orbit around Mars.And it's original lifespan was about 6 months!
Top

any new result this year
Top

Let me repost my favorite -first snap after coming out of blackout.. 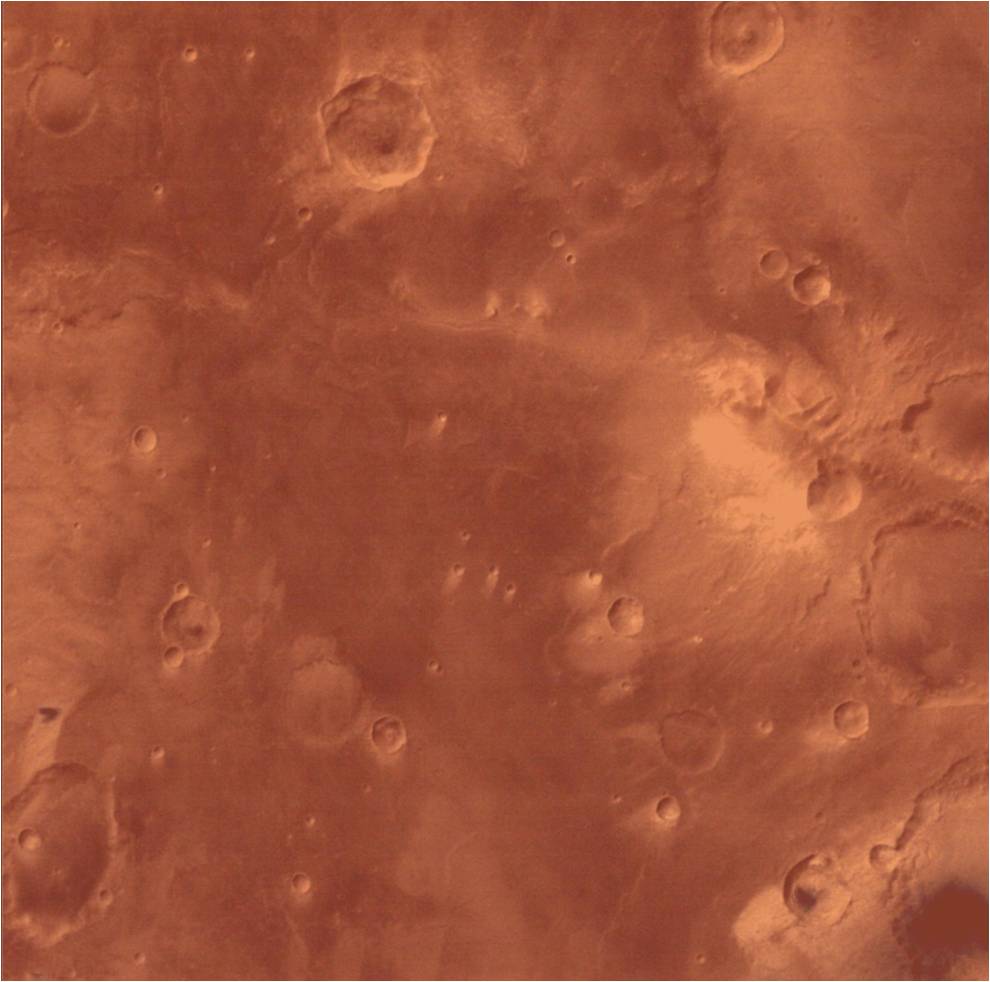 Alt balaji (online content from balaji telefilms) will make a series on mangalyaan. Not that i have very high hopes from them.
http://www.republicworld.com/s/13507/he ... e-based-on
Top

Latest pic from Mangalyaan, taken on January 12/2018. Looks really good! Photo is just under the Nov/2017 paragraph, it should be on top of it.
Top

Another beauty from Mangalyaan/MOM. And these latest pics are from that new orbit MOM found itself in, after the reorientation( because of an eclipse) ISRO did in Jan/2017
Top

^^^From a scientist/engineer's point of view, more one reads about details, one gets more and more impressed about the work done by ISRO scientists.
Top

We need to start naming features at Mars in Sanskrit now........Mars has become westernized all ready..

I have never before seen a picture with such a clear and bright ice clouds on Mars. I must have spent 100s of hours pouring over Mars pictures from NASA and at google pro but don't remember seeing anything like this before.
Top

^^^ There are already a few.. for example this is - Ganges Chasma (or River Ganges)

(From: https://phys.org/news/2015-11-witness-early-mars.html
(The above picture is from ESA but if you look through my earlier posts - I remember posting picture of Ganges Chasma from one of the first photos taken by Mangalyaan)
Top

Today(Sept 24/2018) is four years of Mangalyaan being in orbit. I hope they mark the event by posting some more photos. It's been many months since the last public ones. What an achievement to be orbiting Mars for 4 years, when the original lifespan was supposed to be 6 months!
Top

[youtube]=https://www.youtube.com/watch?v=aIAq9UEPSWU[/youtube]
Such TFTA that it gives me goose bumps, came across as an ad on youtube, ended up watching a 23 min ad for the first time, in the meanwhile a young teammate came and she too got hooked had to watch it again. Didnt mind either
Top

^^^^ Thanks AP ji, Can we put this video as a sticky. Extremely good acting by Prakash Belawadi(actually all others too) playing Radhakrishnan.

ArjunPandit wrote:[youtube]=https://www.youtube.com/watch?v=aIAq9UEPSWU[/youtube]
Such TFTA that it gives me goose bumps, came across as an ad on youtube, ended up watching a 23 min ad for the first time, in the meanwhile a young teammate came and she too got hooked had to watch it again. Didnt mind either

suryag wrote:^^^^ Thanks AP ji, Can we put this video as a sticky. Extremely good acting by Prakash Belawadi(actually all others too) playing Radhakrishnan.

this video should be made a part of class V curriculum so that girls and boys alike see what SDREs can achieve. I get elated everytime..
Top

ISRO statement on the fourth year of Mangalyaan in orbit.
Top

ArjunPandit wrote:[youtube]=https://www.youtube.com/watch?v=aIAq9UEPSWU[/youtube]
Such TFTA that it gives me goose bumps, came across as an ad on youtube, ended up watching a 23 min ad for the first time, in the meanwhile a young teammate came and she too got hooked had to watch it again. Didnt mind either

This is a great find, Arjun-ji. Thanks for sharing.

I am sharing it with some groups that are involved in teaching rural kids.
Top

If Mangalyaan has enough fuel left then can we make it escape from mars like sling shot and travel towards Jupiter?
Top

The delta V to escape Martian orbit is too hogh. Gravity assist cannot be used after capture ! You can accelerate or decelerate using gravity assist but cannot escape once you are captured and are orbiting.
Top

The video is a great initiative. But I thought even radio signals would take at least 4 minutes or so to reach mars from earth.

I was under the impression that the instructions for burn etc were per-programmed or at least sent much in advance. In the video, it looked like the operator would push a switch and the change happens in MOM. Is that just for fictionalisation?
Top

At that time (and placement of Mars relative to earth in 2013) the time for one-way travel of signal was 8 minutes- quoting from memory here. There are some technically incorrect things...one guy talks about escape velocity. The craft did not reach escape velocity (it does not need to). Then he says the craft reached a velocity of 22 km/sec. I think it was about 32 km/sec of which 31 km/sec was from earth's speed of revolution; so the delta is about 1.0 km/sec. Initiative is good, but the drama seemed a bit over-done. The look-alike for Radhakrishnan was really good...it seemed like he played himself.

Added later: The velocity of the craft was about 32 km/sec after it left earth orbit; but it had to slow down as it reached Mars, and that was down to 22 km/sec. (The 8-minute figure- could not confirm it).
Top

Some of the details were indeed off, but it explains the complicated challenge in a relatively easy to understand way.
Top