The Military Issues & History Forum is a venue to discuss issues relating to the military aspects of the Indian Armed Forces, whether the past, present or future. We request members to kindly stay within the mandate of this forum and keep their exchanges of views, on a civilised level, however vehemently any disagreement may be felt. All feedback regarding forum usage may be sent to the moderators using the Feedback Form or by clicking the Report Post Icon in any objectionable post for proper action. Please note that the views expressed by the Members and Moderators on these discussion boards are that of the individuals only and do not reflect the official policy or view of the Bharat-Rakshak.com Website. Copyright Violation is strictly prohibited and may result in revocation of your posting rights - please read the FAQ for full details. Users must also abide by the Forum Guidelines at all times.
Post Reply
4223 posts

i am trying to understand the mechanism of multi satellite deployments. Too many queries.
For example, how would the CartoSat-2D get seperated? are there explosive bolts that go off, releasing the sat, causing it to float away. Will the LAM then kick in to gain control?
How are the Nanosatellite released from the QuadPacks? Will it just float out, when the flaps open, or does it use some mechnism to nudge it out.
the PSLV-C20 Brochure had a good visual descriptiopn of it using the DLA
http://isro.gov.in/pslv-c20-saral/pslv-c20-brochure
Even as recently as C36 they had released representation of the satellite mounting

Came across only 1 instance where the C37 deployment was quoted
http://www.thehindu.com/sci-tech/scienc ... 075073.ece
Top

Don't know if this was posted earlier

BENGALURU: Indian Space Research Organisation has said that the indigenous development of Telemetry & Telecommand Processor (TTCP) has been realised and its productionisation will be initiated with the help of Indian industry.

The processor, whose indigenous development was taken up by ISRO as part of 'Make in India' campaign, replaces the expensive imported equipment.
TTCP will be used in Integrated Spacecraft Testing of Low Earth Orbit, Geostationary Orbit and Interplanetary Spacecraft, ISRO said.

This system is configurable to meet uplink and downlink requirements of both CCSDS (Consultative Committee for Space Data Systems) and ISRO standards, and multiple clients can remotely access this system for data and monitoring, it said.

Spacecraft Checkout Group of ISRO Satellite Centre (ISAC) is responsible for integrated spacecraft testing to ensure the flight worthiness of the spacecraft built at ISAC.

Pointing out that during the testing, ground systems will communicate to spacecraft via the same uplink and downlink signals, as in space, the space agency said, the spacecraft typically use ISRO formats for telemetry and telecommand (downlink and uplink), for which indigenous equipment are being used.

However, the interplanetary spacecraft use an international standard known as CCSDS, and presently equipment are being imported for telemetry reception and telecommand transmission requirements, it said.

This indigenously developed Processor was successfully deployed for the first time in checkout of GSAT-19, which is scheduled to be launched shortly.

^ There is a spring loaded ejection mechanism for deployment of satellites.
Top

SSSalvi wrote:***
This a stale article. An year old report.

But nothing has changed .. no US launcher has since come up to compete PSLV costing. In fact Space X had a few serious hiccups which it overcame and had a successful launch only in January this year.

By that time ISRO could gather several satellites through ISIS culminating in this world record launch of 104 in one go.

( But one fails to understand how could ISRO could recover only half of the launch cost in spite of such a large number of co-passengers. Although Indian satellites weigh about 700 Kgs and foreign sats weigh 500 Kgs ISRO could have bargained for full cast recovery )

Of course we don't know what is in next agenda item in US policies after H1B and Travel bans.

In the long term, ISRO's aim itself should be (and possibly will be) be to outsource LV fabrication & operation to private players (and even the design part down the line). Then, the whole point of launches being subsidized by the government wont matter.

The European Space Agency and the Japanese realized recently that having too much organizational control over LV development will only drive up the costs. That is why development &operation of their next launchers (Ariane 6 and H-3 respectively) are being outsourced to private players (Airbus Safran and Mitsubishi Corp). But, they did waste a significant amount of effort (in terms of money & efficiency) on their previous programs before they bit the proverbial bullet.

ISRO should learn from these organizations & and look at privatization as soon as possible (have a structured plan for building up private contribution in a phased manner). I believe they are already doing this to a certain extent. It is a good time to start as our labor costs are still low and we are not losing a ton of money on our programs.

There are a couple of really interesting startups in the Aerospace sector in India (Team Indus and small other fledging startup called Bellatrix Aerospace IIRC). ISRO should come up with a kind of formal incubation program for these small players.
Top

Privatization should be in limited areas. NASA is gov controlled/funded. Technology transfer from ISRO to private companies should be encouraged.

Do what makes sense to India.
Top

SwamyG wrote:Privatization should be in limited areas. NASA is gov controlled/funded. Technology transfer from ISRO to private companies should be encouraged.

Do what makes sense to India.

NASA is a US government organization but they have longed stopped developing LVs and they contract private launch vehicles for launches. SLS (Space Launch System) is currently the exception since it was designed by NASA (and being built by sub contractors). The trend seemingly moves in the direction of initially outsourcing small parts & then increasingly more complex ones, then whole Launch Vehicle and eventually even the design itself (seen in US, Europe and Japan). ISRO is still in the initial stages of this process (they plan of privatizing PSLV fabrication in the medium term). I agree that the satellite market itself is in its infancy in India & ISRO will the only customers these startup companies might find but still important that they are properly nurtured in the long term.

This enables the organizations themselves to focus more on the actual science, technology research & innovation.
Top

ISRO has not given Satellite Housing Bay details this time.

Satellite identification is my interpretation .. not official version 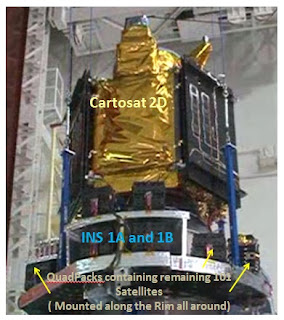 Launch authorized .. so no abnormalities
Top

Why the kazakhstan sat is called 'Al-Harami'?

The sat separation is via springs @105 separation events will be performed.

The hindi commentary is pathetic. No information on what is going on. Much more details on history etc. And I am about to have a stroke here with anxiety.

Da faq... He is describing emotions on the face of chairman. Keep your eyes on the vehicle dude..
Top

Vehicle is out of Mauritius range and has not come into TRAL (antartica) monitoring station yet. Will download data after +7 min.
Top

this whole telecast thing should be handed over to a proper media agency ... complete crap ...when you are trying to reach out to a global audience ... you have to have total commentary on english --- live... I just do not get this Hindi love
Top

Working from home today, but couldn't resist to catch the live feed of 104 satellites being launched by ISRO. All in a days work for these guys, but near impossible for most.

hats off to the Indians. Proud moment for all desh bhakts
Top

Prithwiraj wrote:this whole telecast thing should be handed over to a proper media agency ... complete crap ...when you are trying to reach out to a global audience ... you have to have total commentary on english --- live... I just do not get this Hindi love

i don't get it, what will they do differently? There is no go pro hanging off the satellite to show anything there. More than anything we want people in India to believe in themselves. Others will eventually believe.

Congratulations Isro! All satellites have been released. Now words like "text book laanch" will be launched.
Top

Prithwiraj wrote:this whole telecast thing should be handed over to a proper media agency ... complete crap ...when you are trying to reach out to a global audience ... you have to have total commentary on english --- live... I just do not get this Hindi love

i don't get it, what will they do differently? There is no go pro hanging off the satellite to show anything there. More than anything we want people in India to believe in themselves. Others will eventually believe.

Sorry .. but this is an amateurish performance by Doordarshan... the camera men was literally zooming in an out trying to find the giant rocket 5 secs after launch... reminds me of doordarshan camera man trying to find whether the cricket ball is ... back in 90s.. when you know the trajectory you should have pre fixed cameras with focus settings from multiple angles.. even a basic wedding photographer will do a better job.. multiple foreign news channel picks these feeds to report ... it probably takes .001% of the mission budget to come up with a better telecast quality... it helps in building the brand and image across the globe...even North Korea does a better job.. sorry to say
Top

They already have antenna slaved to flame tracking sensors.

Just parallely feed the output to camera .. or ISRO should permenantly mount cameras on antenna.
Top

Cybaru wrote:i don't get it, what will they do differently? There is no go pro hanging off the satellite to show anything there. More than anything we want people in India to believe in themselves. Others will eventually believe.

This is precisely the point. All these events are good advertisements to the public about our accomplishments and capability. Marketing plays an important role as well.
Top

I missed the early part, so I have no idea what happened. Perhaps ISRO should do the whole thing then. Share live feeds from multiple cameras and the commentary.

Getting a single satellite into space can be difficult — as Japan recently demonstrated — so consider the logistics of India’ s plan to send a record 104 satellites into orbit today, and try to keep your jaw from hitting the floor. The country’s Polar Satellite Launch Vehicle is scheduled to head skyward soon and, if it successfully completes its mission, it will absolutely crush the previous record for number of satellites launched in a single mission. The missions 104 satellites come almost entirely from other countries, including 96 from the United States alone, with Switzerland, The Netherlands, and Israel also contributing to the payload. The countries pay for their share of the mission, with India’s for-hire space program acting as something like a low-cost space taxi service.The biggest single contributor of satellites to this particular mission is Planet, an Earth-imaging company that endeavors to have the most up-to-date photographic data of every square foot of the planet. The company provides its data to clients in a number of different industries, from agriculture to defense. Planet also builds its own satellites, which it calls “Doves” and are launched in groups called “Flocks.” The company has raised over $180 million to get its satellites off the ground, and today’s 88 new cameras will join 55 satellites already in orbit.The previous record for satellites in a single launch was set by Russia in 2014 when the country sent a rocket carrying 39 satellites into orbit. Now we all just have to cross our fingers and hope the mission goes off without a hitch.

Of the 104 small satellites, 96 belong to the United States while Israel, Kazakhstan, the United Arab Emirates, Switzerland and the Netherlands are the other foreign clients.

The Indian government has increased the budget for its space programme this year and also announced plans to send a mission to Venus.