The Military Issues & History Forum is a venue to discuss issues relating to the military aspects of the Indian Armed Forces, whether the past, present or future. We request members to kindly stay within the mandate of this forum and keep their exchanges of views, on a civilised level, however vehemently any disagreement may be felt. All feedback regarding forum usage may be sent to the moderators using the Feedback Form or by clicking the Report Post Icon in any objectionable post for proper action. Please note that the views expressed by the Members and Moderators on these discussion boards are that of the individuals only and do not reflect the official policy or view of the Bharat-Rakshak.com Website. Copyright Violation is strictly prohibited and may result in revocation of your posting rights - please read the FAQ for full details. Users must also abide by the Forum Guidelines at all times.
Post Reply
4223 posts

Dookh Darshan needs to have a space correspondent that knows when NOT to pan on people (at one stage, it pan'ed on a family in audience for complete 10 seconds!) OR on the range operator. It can show the progress screen with background information.

I did not have problem with Hindi/English commentary., the commentary was good - the Hindi was very flowery and hence useless., while the English commentator brought in various aspects of the launch.

Here are the key points with this launch:

1. ISRO/India is the go-to destination now for small and ultra-small sized satellites. This actually opens up the industry further., since space application can be accessed by small companies in $10M to $100M range. If Wipro/Infosys/Reliance/etc have some vision., they can use this to have their own fleet of space vehicles for their own operations. Think ISRO launched an iPhone.

2. ISRO has cornered the entire small/ultra-small sized sat market. Unless other countries make space launch as a national program., their launchers will become prohibitively costly. Only Russia, US and India have launchers which can readily cater to small to mid-size sats and within that only ISRO has the expertise to cater to ultra-small (or nano) sats.

3. Launching 104 sats in 105 separation events (I am including P4 stage as well) required taking into account 5000+ permutations of launch sequence variations. This is heavy math. Further, P4 stage itself is a satellite for some 10 orbits and will provide ISRO additional data.
Top

No one taught the commentators the power of the pause and silence. ?

If privatised, I feel,it will just get worse. For starters, screen crawlies would eat up the bottom 25% of the screen, sponsor ads would be timed to appear perfectly during critical events in the launch sequence with all manner of cute unnecessary animations.

But great job by the ISRO team.
Top

Which foreign media will start Indians living under $2 a day, full of poverty and water crisis Rona Dhona?

I am happy that ISRO got to launch its satellite by making the foreign saletllite owners pay half for the launch. It is like getting two mangoes with one stone.
Top

Disha well articulated points. A good University now can afford to launch a nano satellite for a small price. If ISRO can line up 50 or 60 such satellites everytime, then it's cost to launch Indian satellites go down.

India gets goodwill and recognition from so many students and professors from around the World.
Top

1. ISRO/India is the go-to destination now for small and ultra-small sized satellites. This actually opens up the industry further., since space application can be accessed by small companies in $10M to $100M range. If Wipro/Infosys/Reliance/etc have some vision., they can use this to have their own fleet of space vehicles for their own operations. Think ISRO launched an iPhone.
.

Disha Sir,
Wondering what the business model is for Wipro/Reliance in small satellite launch? If it is not their core competency, and if there is no part of the business that cannot be commoditzed or that can be offered as a package, it will remain a niche custom area.
Please dont forget that these companies might have to invest in labs and testing equipment which could cost anything from $10 million upwards. These companies would need to know if there is a long term revenue stream by placing themselves in between launcher and satellite developer.
Top

I am happy that ISRO got to launch its satellite by making the foreign saletllite owners pay half for the launch. It is like getting two mangoes with one stone.

Also the Briturds will complain on how aid is being wasted as it is spending 'zillions' of pounds improving the brown man's living condition.

BTW, congrats to ISRO and its scientists. Burnol moment to capital of fake goods China.
Top

My bet is that this time the whine is going to be about low cost yevil ISRO contributing towards creating more space junk. Should low cost players with hordes of nanao satellites be allowed to litter the space, hain?? Should a responsible space agency try to make quick buck with scant regards towards space junk issue hainjee... etc etc.
Top

..
While India’s first mission to Mars undertaken in 2013 was a purely Indian mission, the French space agency wants to collaborate in making the Mars rover. In fact on a visit to India this month, Michael M. Watkins, director of the Jet Propulsion Laboratory of NASA, said they would be keen to at least put a telematics module so Nasa’s rovers and the Indian satellites are able to talk to each other.
(so putting a "telematics module" to talk to Nasa's rovers and making a rover w/ the french - imply they are no longer indigenously reaching other planets ? )

The second Indian mission to Mars is likely to be all about doing good science since the first one was a technology demonstrator.

India’s maiden mission to Venus is likely going to be a modest orbiter mission. Watkins said a mission to Venus is worthwhile as so little is understood about that planet and NASA would definitely be willing to partner in India’s maiden voyage to it. Towards that, NASA and ISRO have already initiated talks this month on trying to jointly undertake studies on using electrical propulsion for powering this mission. Former ISRO chairman K. Kasturirangan says, “India should be part of this global adventure and exploring Venus and Mars is very worthwhile since humans definitely need another habitation beyond Earth.”

Closer home, on its 39th launch on February 15, ISRO’s PSLV rocket will lift off carrying 1,378 kg of payloads. Some experts are suggesting that in a bid to earn money, ISRO is actually contributing to the creation of space junk as the numerous nanosatellites onboard are not very useful.
Top

Hiten wrote:i am trying to understand the mechanism of multi satellite deployments. Too many queries.

The sats were deployed through ISIS Quadpack Cubesat Deployer system. 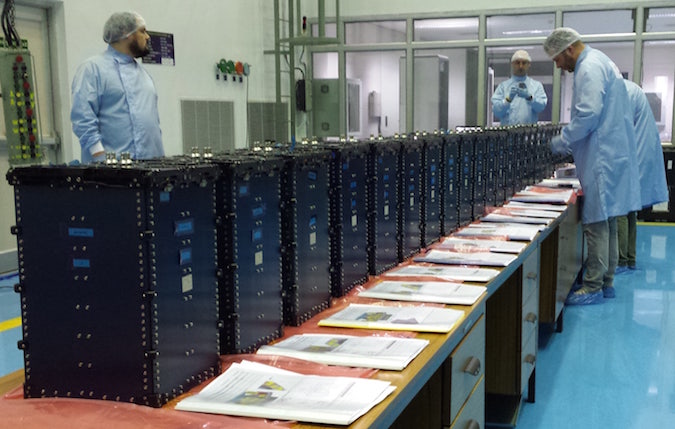 "A view of the 25 “QuadPacks” holding 101 CubeSats slated for launch Wednesday."

Today Planet successfully launched 88 Dove satellites to orbit—the largest satellite constellation ever to reach orbit. This is not just a launch (or a world record, for that matter!); for our team this is a major milestone. With these satellites in orbit, Planet will reach its Mission 1: the ability to image all of Earth’s landmass every day.

Wonder how long before British press starts rona dhona about aid or precious Rupees wasted on space program rather than feed the poor.
Top

More than anything an American company putting faith in a single pslv rocket for all 88 satellites speaks volumes for launch reliability and accuracy of orbit. They could have done 44+44 with isro and others (or 30+30+28) if they had any doubt. I am sure they decided on this after weighing many options.

Not to forget Kazakh, Israeli, UAE, (and our own cartosat) etc in one go.
Top

ISRO calls all media walas to come and cover the launch. Only DD chennai turns up. No pvt TV channel comes.
Antrix corp needs to rope in a videshi telecaster to come and cover. ISRO launches are the worst covered launches
Top

Or launch a Su-30 or Mig 29 with a camera to shoot from the air
Deploy a dhruv to cover the launch site from the air, let the world see the rocket rising from the ground.

Instead of this, what do we get? Antariksh mein raakit ki garjana! Idiot commentator who just won't STFU
Top

All these pvt TV channels camera teams just luvv being lathicharged, trying to film OPS or Sasikala. But none of them will be asked to turn up in sriharikota. Atleast point the effing camera skywards from Marina beach onlee, its free you media idiots!!!
Top

I was thinking if we could use this to design a "sat killing" mechanism. ISRO launches 100 micro sats. These sats are timed and spaced in such a way that they park themselves near to the target and explode or push the target sat to the space. Anyway ISRO made us proud again and again and again.
Top

Antrix corp needs to rope in a videshi telecaster to come and cover. ISRO launches are the worst covered launches

Nothing wrong if Hindi commentator gets carried away in true elation. Why the Hindi version need to sound like nasa version? As long as the Hindi speaking children get motivated and seeded with curiosity then the commentary is OK.

If the Hindi speaker said something technically wrong then Pls point it out but getting poetic is OK.

Today Planet successfully launched 88 Dove satellites to orbit—the largest satellite constellation ever to reach orbit. This is not just a launch (or a world record, for that matter!); for our team this is a major milestone. With these satellites in orbit, Planet will reach its Mission 1: the ability to image all of Earth’s landmass every day.

Happy at least India got mentioned twice in that article. It was like reading old ISRO articles where reports would say a satellite launched, with all specs & itiyadi and mentioning Ariane or Soyuz rockets casually.


How does insurance work for these customers? Does ISRO offer monetary compensation in case things go wrong?
Top

JTull wrote:Wonder how long before British press starts rona dhona about aid or precious Rupees wasted on space program rather than feed the poor.

Not a word about this launch in today's Toronto Star, and nothing about its success on CBC website( haven't watched their TV news yet), though they mentioned yesterday that India was 'set' to launch the satellites. Well, that's old. The Toronto Star had no problem with an article about a leopard getting its head stuck in a bucket in Rajasthan a year ago or so. But a record making satellite mission? There's no excuse, they will be hearing from me!
Top

if you unable to access ISRO's website today
https://youtu.be/ACCsMTZ_qKo
site got hammered with traffic today. NIC should've anticipated it.

The coolest video ISRO put out ever. Just too cool.
Top

Same thing, in Hindi it sounds a little funny.but it's important to have hindi commentary. Has a wide audience pan India who actually understand what's going on cause it's being said in hindi

Awesome ISRO. Many thanks for releasing this video. Just awesome!!!
Top

Did mushy watch this launch? He had some mushy things to say back in 2003.
Top

ISRO has mastered the science of rocket launching, and made it into an art. But it still has not found ways to use the internet infrastructure or website management properly.

Granted one expects high traffic to their website today, still they should pull up their socks in these areas.
Top

But I am not satisfied and dil maange more. GSLV ka number kab ayega
Top

i kindly request to keep this manhusiyat off this thread. it brings bad luck.
Top

Always refrshing to reminisce but this is bad bad omen. You have to perform now major Ydnya to wash your sins.