All threads that are locked or marked for deletion will be moved to this forum. The topics will be cleared from this archive on the 1st and 16th of each month.
Locked
4448 posts

50% is impossible. The net pressure increase was 6% The statement was that with 5(L40 +GS2) and other improvements the payload can be increased up to 3 Tons from 2.5 Tons which would be an 16% approx. Each Vikas engine upgrade would lead to a 70 Kg increment of the final payload mass (ie 350 Kgs and using electrohydraulic actuators another 100 kg has been reduced. Otheer methods to cause a dry mass reduction and the CUS stage upgradation all together would allow an increase to 3.2 Tons from the original design for 2-2-2.4 tons to GTO.
This is the configuration that will be used for Chandrayaan 2
Top 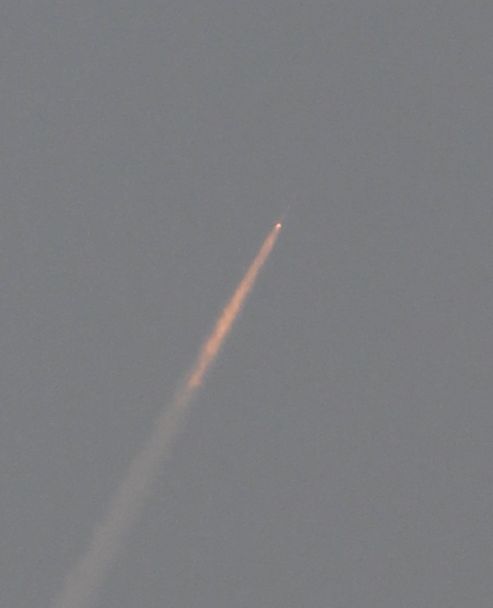 Varoon Shekhar wrote:
Great launch, congrats. Is the electromechanical actuator system made by ISRO? That is not clear, though it is powered by ISRO developed Lithium Ion batteries. Also, would the full utilisation of the propellant lead to noticeable improvement in accuracy and/or payload.

ISRO developed actualtors for LCA. If they have the tech for electomechanical actuators now, AMCA can use them, giving significant edge to it.

And all Agni and K-series. It is a publicly stated improvement going from Agni-5 to Agni-6.

Current payload capacity is 2.25 tons. Changing all the 5 Vikas engines will take the payload up to 2.5 tons. Going to 3 tons will require the upgradation of the CUS: from the current 7.5 Tons to 9.5 tons and propellant mass from 12.8 tons to 15 tons.
Top

SaiK wrote:I heard the improvement for greater than 2.5 ton validations. Can anyone tell more details of how much tonnage now we can launch? 4T?

I think one can hear the whirring of the turbopumps of the CU Stage in the video. Or, is it the background music?
Top

Kakarat wrote:GSLV-F08 in flight seen from Chennai 80km from the Launch Pad

That's actually a good shot considering the distance and amount of water vapor in the air. You may want to borrow or rent a 400mm lens next time.
Top A few seconds (3-4) prior to the launch there appears to be some sort of panel that fell off, and we see several panels fall off a few seconds (2-3) after liftoff. Can someone please explain again?
Top

These are frangibles that provide insulation etc. Normal occurrence in all launches.
Top

^^^Thanks. Presumably needed for the LOX and other cryogenic fuels.
Top

Not just for LOX-H2 but also during loading of the hypergolic liquid propellant . You will see the same insulator foam dropping off during launch of PSLV if you carefully look. The foam cover is made to look like the rockets external surface so it is not obvious but us seen when dropping off at launch.
Last edited by ramana on 02 Apr 2018 22:01, edited 1 time in total.
Reason: Fixed auto correct. ramana
Top

^ you can see the foam layer dropping off. You can see one foam panel near the rocket near the PSLV logo actually dropping off and like the quick change in magic shows the lower painted PSLV is seen. (They paint both the foam layer and the actual rocket in the same manner.(Liquid stages only)
Top

Zoom in after clicking the URL

Few seconds before the launch countdown reached zero, the four liquid propellant strap-on motors of GSLV-F08, each with nearly 43 tons of liquid propellants, were ignited. At count zero and after confirming the normal performance of all the four strap-on motors, the 139 ton solid propellant first stage core motor was ignited and GSLV lifted off at 16:56 IST, as scheduled. The major phases of the flight occurred as intended. About seventeen and a half minutes after lift-off, GSAT-6A was successfully placed in GTO.
.
Soon after separation from GSLV, the two solar arrays of GSAT-6A were automatically deployed in quick succession and the Master Control Facility (MCF) at Hassan in Karnataka assumed control of the satellite. .

GSAT-6A is a communication satellite built by ISRO to provide mobile communication services through multi beam coverage. For this, it is equipped with S and C band transponders.

In the coming days, the orbit of GSAT-6A will be raised from its present GTO to the final circular Geostationary Orbit (GSO) by firing the satellite's Liquid Apogee Motor (LAM) in stages. The Satellite will be commissioned into service after the completion of orbit raising operations and its positioning in the designated slot in GSO following in-orbit testing of its payloads.

Glad to hear about the repeat success of the cryo engine stage.
Top

could be something with the new power umbrella thing. it looks fairly complex. a genius design would be something that uses pyrobolts or cold gas to desegment and release anything that fails to deploy, leaving the basic simpler antenna intact....there are certain videos going around of self deploying IOT "insects" and such

Being reported on other sources too ...

Happens ... we learn from failure too
Top

Saddening but it’s okie, ananth aka tarmak had signaled this yesterday on Twitter

Did the solar panels got deployed , Intial power is from sat battery till it deploys solar panels
Top

Some guru can correct me ...I guess solar panels should be deployed only when satellite is in its final position. Its would have given us advantage but we will recover from it. Sh*t happens

comms was lost during third & final orbit raising manouver so I dont think it had reached stage of deploying solar panels.
it may well have exploded due to some fuel leak or fuel leak or electrical malfunction may have shorted the electronics.
Top

One fantastic thing about ISRO is whenever they've had setbacks (GSLV CUS comes to mind), they've taken a step back, investigated the issues thoroughly and then fixed them at the root.
Top

The agency received data from the satellite for about four minutes after the second orbit raising operation, after which the it went blank, a source said.

BENGALURU: In what is a disappointment for both citizens and the armed forces of the country, the Indian Space Research Organisation (Isro) on Saturday lost contact with the GSAT-6A + , India’s most powerful communication satellite, in less than 48 hours after it launched it on Thursday. While Isro says it is trying re-establish link, sources attributed the failure to a power system failure.

So this is NOT a launch vehicle failure, but rather the satellite itself. Need to trace back to who and when did the power and communication sub-systems. ISRO, BEL, or contracted out.
Top

How sad after such a magnificent launch! Hope they somehow succeed in re-establishing contact.
Top

Supposed to be a power overload problem. Got nothing to do with the launcher etc.
Top

If I were pm, I would say,,,,, postpone chandrayaan,,,, re-build the satellite & launch.
Top

I wonder if the satellite was using indigenous lithium ion batteries - perhaps similar to that used successfully for the launcher.

“GSLV F-08 used electro-mechanical actuators in its second stage for the first time. And these were driven by indigenously developed lithium-ion batteries.”

Of course, I’m presuming these batteries are new based on this: http://www.thehindu.com/sci-tech/science/bhel-to-make-li-ion-cells-with-isro-technology/article23333131.ece
Top

What exactly transpired after the 2nd orbit-raising operations?

Everything went on as prescribed, a picture-perfect launch and two textbook orbit raising manoeuvres and then the satellite suddenly stopped communication. We are yet to determine what exactly went wrong.

When a satellite gets de-linked, it goes into a ‘safe mode’, is that the case here?

Generally the spacecraft returns from ‘safe mode’ in a matter of minutes, it returns in about one to five minutes. This is, however, very unusual as it did not happen. We are unable to establish any contact with the satellite, but our teams are on the job continuously.

What are the chances of recovery?

We are hopeful, but as of now there is no contact with the satellite. If we are just able to speak with the satellite, we can get it back to working as there are several redundancy mechanisms including back-up power. But everything hinges on re-establishing contact.

According to this harami link, India seems to have launched a Naval Frigate into orbit.

The satellite -- an indigenous model weighing more than 2,000 tonnes --

So it's a satellite raising issue.
Could be a battery short that drained it.
Top

Users browsing this forum: No registered users and 15 guests