The Military Issues & History Forum is a venue to discuss issues relating to the military aspects of the Indian Armed Forces, whether the past, present or future. We request members to kindly stay within the mandate of this forum and keep their exchanges of views, on a civilised level, however vehemently any disagreement may be felt. All feedback regarding forum usage may be sent to the moderators using the Feedback Form or by clicking the Report Post Icon in any objectionable post for proper action. Please note that the views expressed by the Members and Moderators on these discussion boards are that of the individuals only and do not reflect the official policy or view of the Bharat-Rakshak.com Website. Copyright Violation is strictly prohibited and may result in revocation of your posting rights - please read the FAQ for full details. Users must also abide by the Forum Guidelines at all times.
Post Reply
2259 posts

All the nay sayers myself included are stunned. Modiji my proud salute and humble pranaam to you. You have brought tears to my eyes.

Ya Ya .... after so many years of waiting. Good time to be in fauj. Happy for the guys who did it. Salute. (P.S. almost jealous of them)
Top

That's because of the operational success that has been achieved. Congi would have played a different tune, if God forbid, one of our boys got hit or was captured....
Last edited by chandrasekaran on 29 Sep 2016 17:56, edited 1 time in total.
Top

Both you and I were getting really frustrated. My boss is gving me a hard time but I cant focus on anything but this. Cant help smiling.
Top

chandrasekaran, which essentially means the surgery started from taking kangrez as pseudo-enemy with white skin. #justsaying

the next big scare for TSP is having the entire IN moving around the Guj-Sindh coast, with heavy movement of fighters from bhuj, nalia, jamnagar and pune....

the redoubtable "Haiders" MirageIII harpoon ASM squadron - a chance to prove its mettle and teach a lesson to the kuffar.

main worry for PN - they can lose a snooping P3 or two using the angles on this one...
Top

The intent from top is so clear now, you will see offensiveness in a lot of ways. This is big from signalling perspective , very very big. Signal to Pak, to B Dutt and R Sardesai, to babus to everybody....huge !!
Top

Yagnasri wrote:As someone posted before here, NM is far more sinister, while planing and execution, than we presume. Someone who know him as CM of Guj told me once that if NM thinks someone is stabbed him the back or tried to do so he will ensure that such person is destroyed compleately and at the same time maintain very good relationship with that person. Remember how he went to Kasu Bhai Patel and touched his feet after defeating him in the elections?

I think NM gave chance to Shariff and Shariff blow it. Now Shariff may have to find a fresh home in Jedda or London once again. If think Shariff2 is not going to retire soon and may stage a coup. PA needs a scape goat and Shariff1 can be that.

May be we will see Imran baba as PM of pakis soon.

big panda back in peking will be carefully observing this ... squeals for a show of support must have already gone out from the pigs.

this is also likely the first time most of saarc has gotten behind india on the terror issue.

only the two self-proclaimed bad boys nepal and SL are holding out.
Top

Akshay Kapoor wrote:Both you and I were getting really frustrated. My boss is gving me a hard time but I cant focus on anything but this. Cant help smiling.

Was off daru but Aaaj to banta hai. Done.
Top

Whatever it was, it was very well done.
Top

Only nitishwa seems to have congratulated the Central Govt so far, may be because he has to ward off lallu ka patta.

All the other parties have very very pointed congratulated the IA only, knowing well how much of face they have lost and that is how much jalan there is against Modi. Big burnol moment for the congis, commies and all other caste based parties.

The PDP has simply shut it's pie hole like other kashmiri parties. Separatists are stunned and many trucks carrying burnol are already speeding their way to the valley.

IWT threat and surgical strikes one after the other?? too much for the bearded baboons to handle in one week.

The BJP would have even wrested the initiative away from the congis after the cauvery waters mediation debacle. The timing could not be so coincidental and it has been a very bold and calculated move to neutralize the congis in more ways than one.

pappu is done for in UP and hopefully so are the others.

It's like Modi told the congis in parliament during the MNREGA discussions, "doubt anything else, but do not doubt my political acumen"
Top

ks_sachin wrote:Akshay,
Sorry I did not get time to mail you but this puts a few things I heard in perspective.
19 Div is close to our heart and a few of the Uri boys who died were from our Paltan although different bn.
Chatter in regimental circles.
So smoke and now the fire!!!!
Can you confirm if there was some activity a week or so ago? Again SF.

Do not identify any unit(s).
Top

Kudos to our forces and government to call the bluff by Pakistanis.

PS - I have one question which was commented briefly in 1/2 pages back. Somebody claimed that India already has S400. Is this true - Yes or No? My understanding is that GOI and Russia have agreed for the S-400 purchase/sale but neither the money has been given to Russia nor S400 has arrived in India (being operational is even extreme thought). Can some one clarify please?
Top 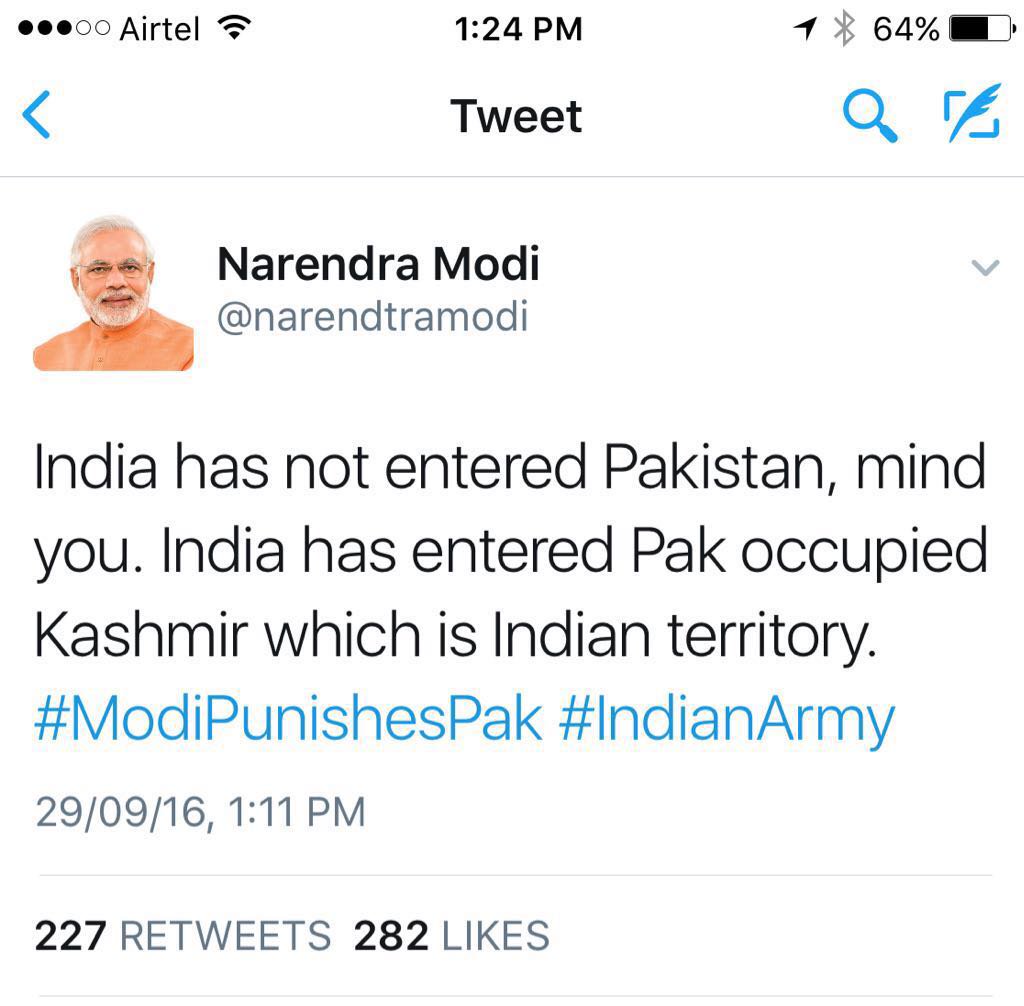 Some back and forth will continues for some months, lets see how this exchange goes. People like Burka are supposed to act like this.

^^ THIS IS MASSIVE ONE LINER MIXED MESSAGE EVEN FOR AMIR KHAAN TO SWALLOW!
Top

ks_sachin wrote:Akshay,
Sorry I did not get time to mail you but this puts a few things I heard in perspective.
.

Do not identify any unit(s).

Thataka has been brought down. Next in line, will be assorted asuras that show up inclusive of surphanaka. After that have to take down Vaali (Four fathers) who have pact with napakis, and allow all support to operate freely. Then Ravana Samharam. Just getting started. Dig in for long haul. The toilet of the world will be decontaminated and a sacrophage built soon.
Top

Check the id. There is a "t" in it which is not there in original twitter handle
Top

Do not identify any unit(s).

You are right. Sachin, delete this pls. I'l delete my repsonse.

Thanks for understanding, saar. Much appreciated.
Top

Hearing about the "surgical strike" Rahul Gandhi is saying that he will support the surgeons who went on strike.

If they utter a word public joote maregi !! These guys know what the public mood is and what govt intent is.

But look how carefully Congis and sickulars are only congratulating IA and avoiding even saying GoI let alone PM/Modi. Some trying to downplay - its not the first time, why govt is breast-beating, it POK-Indian territory, not gone in Pakistan actually so why so much breast-beating or even Modi not alone taking decision, he should not be given credit, so why its #ModiPunishesPak and what not. The usual suspects trying hard. They were caught napping and now slowly they are recovering.
Last edited by JayS on 29 Sep 2016 18:39, edited 1 time in total.
Top

Beauty of all this is Porkies cannot claim terrorists were killed there as they ar not officially acknowledged.

Some brilinat comments on tweets

' Dear Paksitanis, now you have no need to cross the LOC to die. Indian Army has started home delivery'
' Modi expands Swach Bharat Abhiyan across the border'
Top

I believe DGMO brief never mentioned we conducted operation on Pakistani land. The narrative built now is on this like.
They can't really respond diplomatically w/o leaving any loopholes.
Top

Now the next question on a serious note...."Will Pakistan Retaliate".....

Raheel's tenure ends in November. He has 3 options, either choose Jannat by retaliating to Indian attack or do a coup on Miyaan Nawaz or retire, keep enjoying biriyani. I think he will choose either 2nd or 3rd option.

Nawaz sharif doesn't have a guts...but....Raheel Sharif (Army Chief) may take the gamble...

CNN/BBC are parroting Porki version of events, it was the same during Kargil era as well.

Despite both sides' fierce rhetoric, it was unlikely there would be a military escalation at this point, IHS Global Insight analyst Asad Ali told CNN.

"What I would say is that the Pakistani generals are very much ready to use nuclear weapons, at least three strategic nukes, if there is a major border incursion (from India)," he said.

Ali said both the Indian and Pakistani governments were playing to their domestic audiences, as much as each other.
"The Pakistan military can't betray to their domestic audience that they've allowed the Indians to actually cross the line of control by as many as 12 kilometers and there was no action against that," he said.
"On the Indian side, Modi needs to show his domestic constituents that he's taken aggressive action. This is something he promised before he got elected in 2014."

So who the hell is this Ali fella?
Top

Burkha is deeply pained for two reasons. First one (obvious) being that Pak got effed. Second and probably the most important reason why she is sore is that this huge operation took place this this khabarandi didn't get a whiff of it considering that she had complete/full access to all communication channels among the power corridors during UPA regime.
Top
Post Reply
2259 posts