The Military Issues & History Forum is a venue to discuss issues relating to the military aspects of the Indian Armed Forces, whether the past, present or future. We request members to kindly stay within the mandate of this forum and keep their exchanges of views, on a civilised level, however vehemently any disagreement may be felt. All feedback regarding forum usage may be sent to the moderators using the Feedback Form or by clicking the Report Post Icon in any objectionable post for proper action. Please note that the views expressed by the Members and Moderators on these discussion boards are that of the individuals only and do not reflect the official policy or view of the Bharat-Rakshak.com Website. Copyright Violation is strictly prohibited and may result in revocation of your posting rights - please read the FAQ for full details. Users must also abide by the Forum Guidelines at all times.
Post Reply
2259 posts

We already have it.

Good possibility we snatched a few jihadis and ex filtrated them.
Top

MiLawrds , a precedent has finally been set. neither the LOC or the IB is sacred anymore!

anytime we want to take a crap and create mayhem we can indeed go in.
Top

Saar too many connections. Timing out.

Emergency cabinet meeting in Punjab. 10 kms area along border to be evacuated. IB sector on alert along with LoC. Breaking on @IndiaToday

both razdan and dutt are on ndtv reporting, their faces look so constipated and mouths like sucking on sourest lemon in the world...

30 - 35 terrorists killed, on the INDIA TV channel, Arnab is almost dancing in ecstacy and showing porki defence minister and jeering "look at this joker...." he says !

"...look ... look show his clipping again, see how pakistani defence minister is looking defeated completely, he has been pushed out by nawaz that go out.... say something, is this the man who threatened us with nukes ?..."

Major Gen. Bakshi says "Arnab, all their general live in palaces in pakistani punjab they drive mercedes cars, if they hit one TNW even on their own territory, we will hit them in pakistani punjab and for 100s of years not even a grain will grow there...."

Zynda wrote:I was watching Times Now program with Arnab and literally having tears of Joy. Great job by our Army folks for giving it back to frikking pigs. Excellent decision by Modi/PMO to initiate this move...its like Modi saying to Army, "u guys go and do what needs to be done and I'll deal with the consequences". Long time coming...

Apparently, SF were paradropped 0.5-3 Kms inside POK at around 12:30 AM and operation went around until 4:30 AM. Anyone who defended terrorists were killed

No way. This is far too big a task for a few special forces teams. This was a combined ground air assault mission. We put a few bombs on them and mopped up any residual contamination.

Looks like it. PTI via Times now is reporting the same.

Operation was a combination of heliborne and ground forces: sources #IndiaStrikesBack (PTI)

Saurav Jha
‏@SJha1618
Naval exercise is a buildup on the fact that naval moves helped end Kargil. But Brasstacks may be on the anvil as well.
Top

At a joint press briefing organised by the Indian defence and foreign ministries, the director general of military operations (DGMO) and the spokesperson for the Indian foreign ministry said today that the Indian army conducted a "surgical strike" last night on a "terrorist launchpad" across the line of control dividing India and Pakistan.

The DGMO, Lt General Ranbir Singh, said the strike had caused "significant" casualties, that he had called his Pakistani counterpart -- as is protocol -- to inform him of the operation, and that the operation was no longer underway.

He did not give details of how the strike had been carried out.

But sources told WION the strikes were carried out on eight different terrorist hideouts across five launchpads (used to cross over to the Indian side), that 38 terrorists were killed in under one hour, and that Indian army special forces had been paradropped onto the hideouts which were between 500 mts to 2 kms across the LoC.

well that was done really neat and professional

tbh, i was expecting some bomb raids or shelling at max. troops on ground is unprecedented and daring.

also, shows that the paki emperor has no clothes.
Top

Now something must be also done to the sold media.
Top

can someone please archive the important videos (likes times now celebrating etc.) for those of us who are in office etc and can't watch? please.
Top

Zynda wrote:I was watching Times Now program with Arnab and literally having tears of Joy. Great job by our Army folks for giving it back to frikking pigs. Excellent decision by Modi/PMO to initiate this move...its like Modi saying to Army, "u guys go and do what needs to be done and I'll deal with the consequences". Long time coming...

Apparently, SF were paradropped 0.5-3 Kms inside POK at around 12:30 AM and operation went around until 4:30 AM. Anyone who defended terrorists were killed

Edit: Gen Bakshi on the program was mentioning that Pak Def establishment has been on high alert since the last 10 days. PA has been rehearsing all sorts of drills across LOC and would have anticipated such an attempt. In spite of the TSP preparedness, our boys have infiltrated and did they job successfully!

should have seen the faces of burkha butt, zaka jacob and bhupendra chaubey. Shocked and dejected is the best description. massive burnol moment onlee.
Top

Man we need videos/images of their faces.

I have been trying to get to see Arnab's video but cannot connect and if I am lucky it hangs up.
Top

Proud of this, next step .. pre-emptive action!
Top 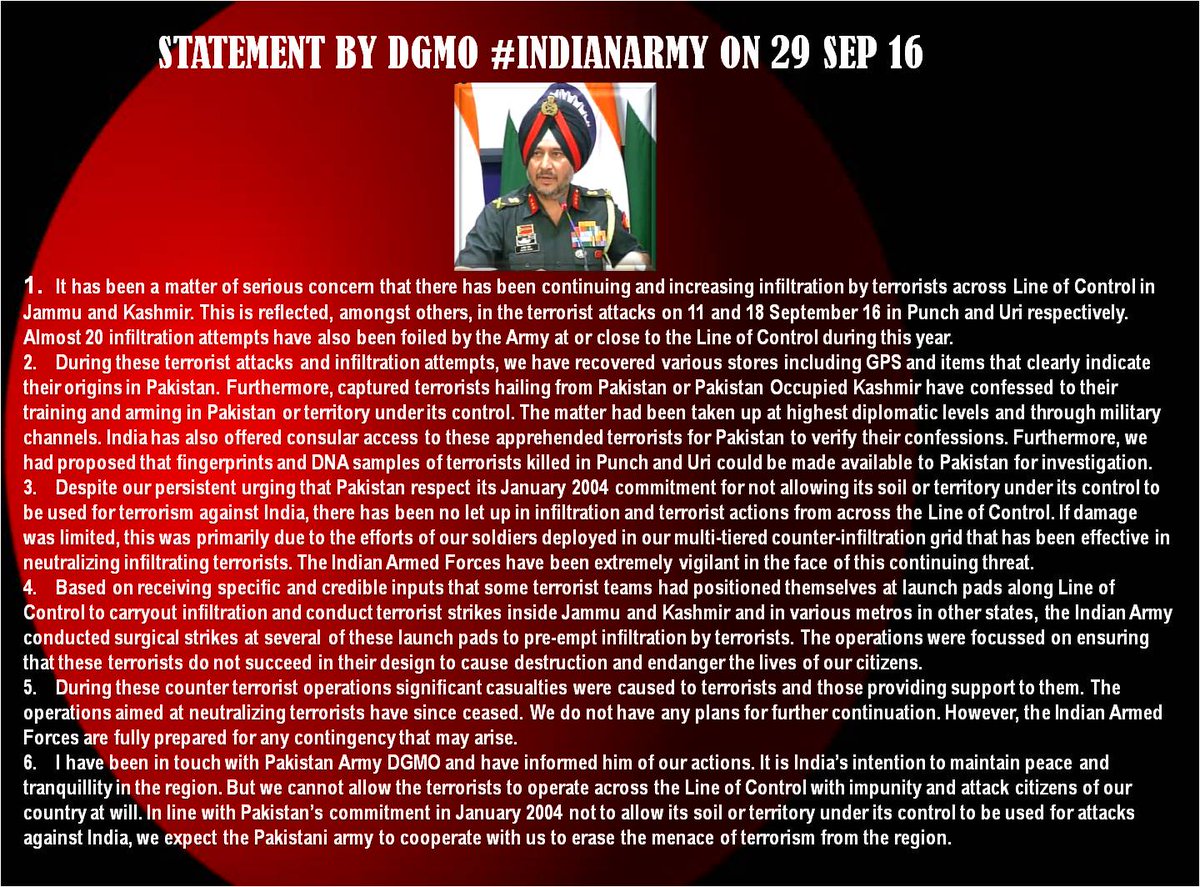 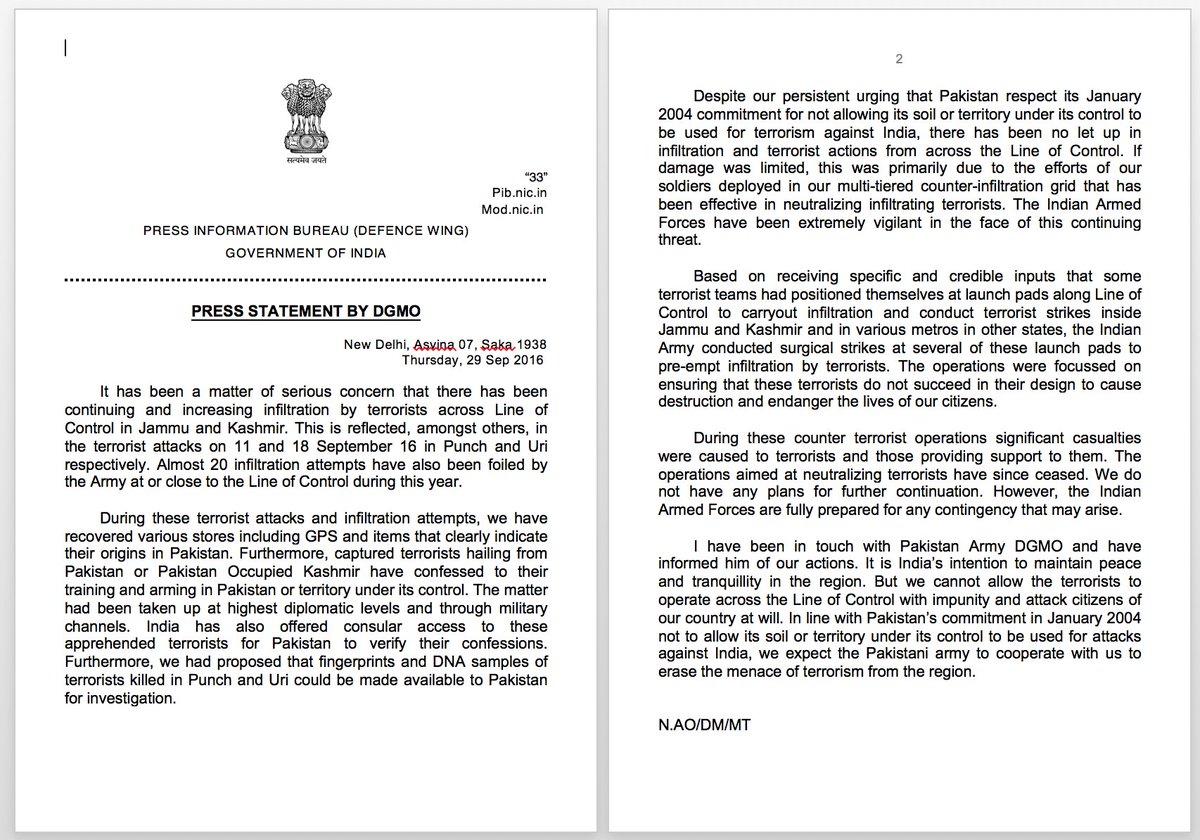 The above is from ex-IAF. Now we know why Exercise Talon was repeated within a month's time. Singha's scenario of fully loaded Su-30MKI on high orbit with Mig-21s keeping vigil in forward bases comes true.\\

BTW - another tidbit. Someone said it was a High Altitude-High Opening (HAHO)....drop on our side, land on theirs.
Top

4 hours, choppers and 38 kills: How India avenged the Uri attack

Nearly 10 days after the Uri attack that claimed 18 jawans, India carried out surgical strikes in Pakistan Occupied Kashmir, inflicting heavy casualties on terrorists and 'those protecting them" and indicating a change of stand on the rules of engagement on the disputed line of control.

Indian DGMO Lt Gen Ranbir Singh announced that Pakistan had been informed about the strikes and that India has no intention of continuing the operations but is ready for any reaction from the Pak side.

The response, first of its kind across the Pakistani border during peace time, was based on specific intelligence, claim reports.

Also Read: A detailed coverage of India's response to Pakistan

Here's what happened in 4 hours, according to reports:

1. Operation begins around 12.30 am on Wednesday. According to reports, paratroopers from Special Forces were involved.

2. The commandos were airdropped at the LoC, from where they crossed over to the Pakistani side.

3. According to sources, Indian commandos entered three kilometres across the Line of Control to conduct the 'surgical strikes'

4. The strikes were carried out in Bhimber, Hotspring, Kel & Lipa sectors, on Pak's side of LoC, according to reports.

5. The location was 500 meters-2 Km across LoC, sources said

6. 7 terror launch pads were destroyed during the surgical strike

7. 38 terrorists and 2 Pakistani soldiers were killed in Indian Army surgical strikes, no Indian casualties. Those killed included terrorists, their guides and handlers

8. Helicopters were used. Mission, according to reports, ended at 4.30 am

Why did India go for this
The option of surgical strikes was taken in the wake of increase in infiltration bids , the DGMO informed. Terrorists had begun gathering in large numbers along the LoC with the objective of crossing the border and targeting locations in Jammu and Kashmir, as well as other metros. In such a scenario surgical strikes was considered the best option to deal with the threat.

Surgical strikes does not mean war
Surgical strikes are military operations undertaken by forces across the world to move on the offensive, hit enemy targets and installations, and return to primary positions, all with lightening speed and with the added precaution of suffering limited casualty.

Surgical strikes require not just detailed and exhaustive planning but need to be carried out with absolute precision to achieve the objective of taking down targets with either no or minimal collateral damage.

4 hours, choppers and 38 kills: How India avenged the Uri attack

Someone well commented in the comment section of the news article above "Happy diwali Pakistan".
Top

Pawan Durani ‏@PawanDurani 1h1 hour ago
#Alert : Villages in Punjab which are 10KM from International Border with Pakistan are being evacuated, additional BSF troops move in
Top

5. The location was 500 meters-2 Km across LoC, sources said - A large number of Paki observation posst were either bypassed, suppressed or demolished.

7. 38 terrorists and 2 Pakistani soldiers were killed in Indian Army surgical strikes, no Indian casualties. Those killed included terrorists, their guides and handlers - Should be 30 or more, not 2 if 7 launch pads were demolished

Sumeet wrote:Man we need videos/images of their faces.

I have been trying to get to see Arnab's video but cannot connect and if I am lucky it hangs up.

This is from NewsX

SF folks had to circumvent Pak Army positions and thus total travel distance was nearly 8Kms. Apparently no helicopters were used in the ops. However Gunships were on stand by. Entire operation was monitored using UAVs. Apparently, 2 of our boys sustained minor injuries during ops.

This is from another source, all commandos were asked to switch off their phones for the last 10+ days. No communication with family members.
Top

The scheduling of MFN meeting today may have been just a decoy, to lull them into thinking that no military action is imminent.
Top

Any Reaction from Uncle and preaching on World Peace ? What a Moment
Top 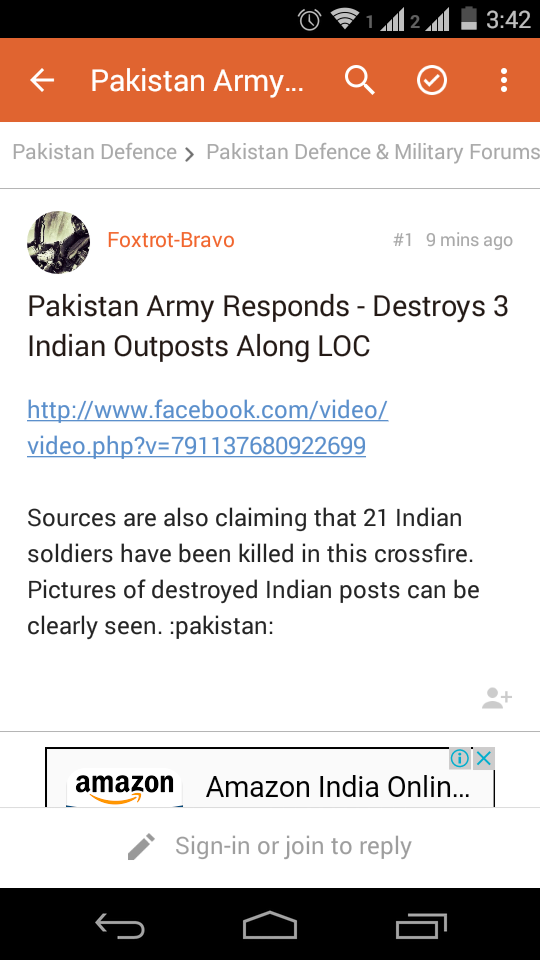 I apologize for ever doubting the Gov. resolve in dealing with the paki menace.
Last edited by Sicanta on 29 Sep 2016 16:10, edited 1 time in total.
Top

Meenakshi Lekhi on rNDTV just 5 minutes ago, was really rubbing it in to bdutt very very diplomatically, and bdutt was like a whipped slave agreeing to everything she was saying super-eagerly....
Top

TSP tv channels are in a hysterical state ...makes and females screaming in parallel....showing a pic of a cluster of buildings perhaps taken from a drone or mountain and claiming bharatiya camp to puri tareh sein tabah kar diya gaya...the pics they are showing displays a intact looking camp to me.
Top

Singha wrote:TSP tv channels are in a hysterical state ...makes and females screaming in parallel....showing a pic of a cluster of buildings perhaps taken from a drone or mountain and claiming bharatiya camp to puri tareh sein tabah kar diya gaya...the pics they are showing displays a intact looking camp to me.

Sir where are you seeing this? In case you can do a youtube search of LOC firing some older videos may be visible. They could be using those.
Top
Post Reply
2259 posts

Users browsing this forum: No registered users and 55 guests