The Military Issues & History Forum is a venue to discuss issues relating to the military aspects of the Indian Armed Forces, whether the past, present or future. We request members to kindly stay within the mandate of this forum and keep their exchanges of views, on a civilised level, however vehemently any disagreement may be felt. All feedback regarding forum usage may be sent to the moderators using the Feedback Form or by clicking the Report Post Icon in any objectionable post for proper action. Please note that the views expressed by the Members and Moderators on these discussion boards are that of the individuals only and do not reflect the official policy or view of the Bharat-Rakshak.com Website. Copyright Violation is strictly prohibited and may result in revocation of your posting rights - please read the FAQ for full details. Users must also abide by the Forum Guidelines at all times.
Post Reply
4883 posts

What exactly are these and for which aircraft? SU-30MKIs?

Read in today's TOI, that these are KAB-1500L Laser guided bombs- i.e are these 1500KG Bombs? these could they be Bunker busting bombs for say taking out command Bunkers etc. and the 131 Barak-1's are replacement of shelf live of existing missiles getting too old.
Top

no chance. they are what it says, the biggest regular bombs in RuAF use for hard/large targets. 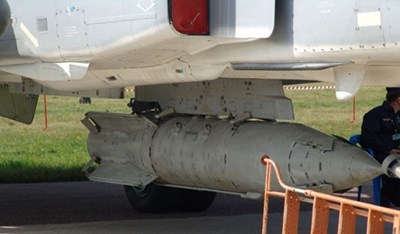 Yes, like the Mirage LGB in 1999. these 240 will have a target name written on them. But I guess other than Agni series BM's, nothing else in the Armed Forces weaponry will come with 1100 KG warheads.
Top 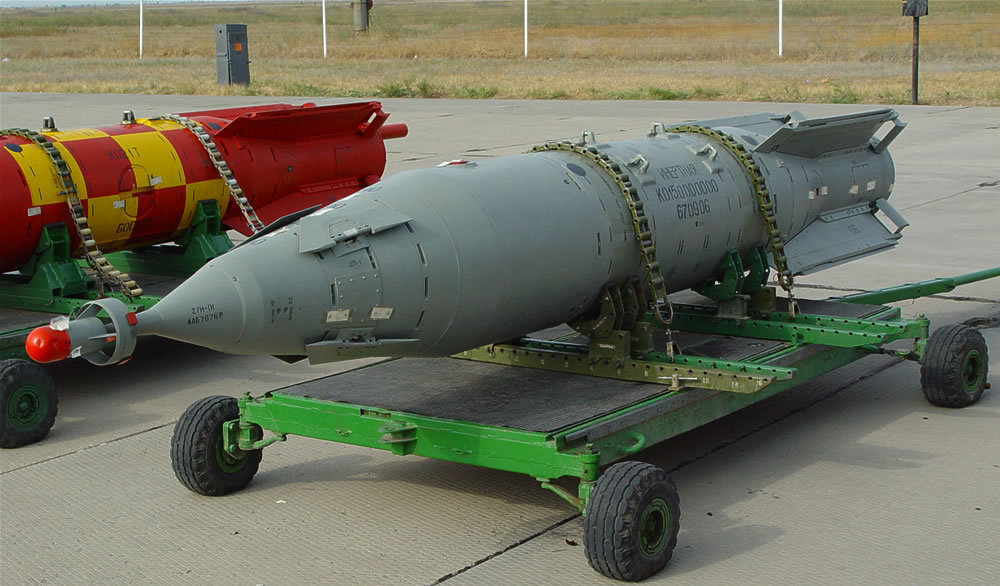 Little monster! Remember the size of British Tallboy (6K kg) and Grand Slam (12K kg) bombs in WW2? We need some of those delivered by our transports or future strat. bombers.

Interestingly,German U-boat pens were simply indestructible.Here's one account of an attack using a Tallboy.

A MiG 29 fighter jet of the Indian Air Force crashed on Wednesday at Goa's Dabolim Airport.
The trainee pilot ejected safely after the plane caught fire.
According to news agency ANI, the MiG went off runway while taking off and caught fire.
Top

VKumar- Not the aircraft deal but the deal for SPIKE seems to have been spiked. This would belong better in Missiles thread.

Philip wrote:Little monster! Remember the size of British Tallboy (6K kg) and Grand Slam (12K kg) bombs in WW2? We need some of those delivered by our transports or future strat. bombers.

Interestingly,German U-boat pens were simply indestructible.Here's one account of an attack using a Tallboy.

OT, but if bombed again the Pens could have collapsed after the initial hits weakened the structure.
Top

Information on HAL's production capacity as of now

In Lok Sabha. The below information given by RRM Subhash Bhamre in a written reply to Prof Saugata Roy and Innocent today.
@akananth 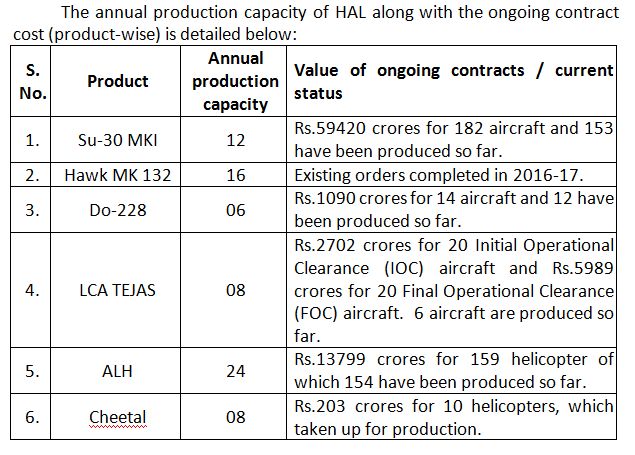 Nothing on LCH and what's next for ALH
Top

Quite Frankly, IF HAL was a private entity and had such an order book it would have been shut down for the investment, only a PSU with all its ineffective s it brings can afford to survive with such piecemeal order books, as much as OFB , HAL are at fault, the Commission agents, Politicians, Media, Procurement wings of defense Forces, MOD babus ( entire import lobby) system is responsible for this mess.

Can't imagine Lockheed Martin developing F-35, US Gov took a similair position that prove IOC for metal cutting FOC. Clealrly none of the decesion makers from top politicians to babus is serious about an Indian MIC.
Top

Aditya_V wrote:Can't imagine Lockheed Martin developing F-35, US Gov took a similair position that prove IOC for metal cutting FOC. Clealrly none of the decesion makers from top politicians to babus is serious about an Indian MIC.

In the US, the OEM does not develop an operational system. Development is led by a program office with a program executive officer in charge who comes form the USDOD since the DOD owns the development program and controls it. Lockheed and Pratt and Whitney are executing the program as ordered to do by the Joint Program Office which exists because this is a multi-service/nation program. Technically, the JSF is developed by the Joint services in the US via the JPO. JPO controls the program and determines how it is executed.
Top

. Retooling/requipment reqd, but land and labor expansion not needed.
Top

The SU 30 production lines after 2019 will be used for the Super 30 MKI upgrade. The current capacity to produce DO 228 at 6 will be ramped up following HAL push to sell the civilian variant for the UDAN scheme.The Hawk line capacity of 16 plus the Tejas line at 8 and also the proposed increase in its capacity by another 8 would give us 32 Tejas if combined.
Top

Austin, Thanks. Note the front folded fins or canards and the aft fins with slots from extended control surfaces.

DRDO is developing 1000 kg bombs so these are additional to that.
Is this for the Su-30MKIs?

Did they have these before?
Top

X-Posting. Some very good details in this report...

Vips wrote:India to Buy Smart Bombs Worth $200 Mln From Russia.

India will soon procure 240 smart bombs worth $200 million from Russia to boost its air power. On Tuesday, Indian defense minister Nirmala Sitharaman cleared the purchase plan of these bombs which will be used to hit specific targets with minimum collateral damage.

According to an official document, these bombs are effective against ground targets like railway yards/bridges, major installations, bunkers, runways and hardened targets. The bomb can be carried on various in-service aircraft like the Jaguar, MiG and other advanced combat aircraft of the IAF. Such bombs play a very important role in strike missions where aircraft are tasked to destroy ground installations and enemy runways.

At present, the IAF is fully dependent on imports of the lethal bombs from Israel, France, Russia and the United States for its fighters. But the country is also striving to attain self-sufficiency on the munitions front. Last year, the state-owned Defense Research & Development Organization had successfully tested a precision-guided high-speed low drag (HSLD) bomb weighing 500 kg, which is the largest bomb locally developed in the country so far.

In 2016, OIS Advanced Technology (OIS-AT) teamed up with Sagem of France to establish a manufacturing unit for precision-guided guidance kits to meet domestic requirements. 
What would be the USD figure for each type ?
Top

Austin, Thanks. Note the front folded fins or canards and the aft fins with slots from extended control surfaces.

DRDO is developing 1000 kg bombs so these are additional to that.
Is this for the Su-30MKIs?

Did they have these before?

ramana , KAB-1500 series has multiple guided variants with various explosive you can check this from OEM Site I have linked

we have probably purchased a mix of variants incl the bunker buster model called KAB1500L-Pr-E. it has a super hard case and a sub caliber directional warhead(??) vs a thinner case and a huge warhead for the blast fragmentation model.

Description: The KAB-1500LG-Pr-E as part of the KAB-1500L bomb family, also referred to as KAB-1500LG-E, is a 1,500 kg, laser-guided bomb designed to hit small stationary and extremely strong buried targets such as string concrete objects, command posts, ammunition stores and bunkers. This bomb is carried by the Su-24M, Su-34, Su-35 and Mig-35 aircraft. The KAB-1500LG-Pr-E features an impact fuze with three delay modes and a penetrating warhead.
Top

Another thing to remember, these cost are for 20 jets. When the numbers go to 200, it should reduce even further.
Top

this ugly dog called FAB5000 was used in ww2 to level stuff like railway yards by heavy 4 engine bombers.
useful to have a tool like this , with some guidance fins (radio command link) for certain situations like smashing the top of fortified hills from 10km away and high altitude.
http://histografy.pl/wp-content/uploads ... 24x639.jpg
Top

Austin wrote:From above MOD Figures the per unit production cost for each type made by HAL


What would be the USD figure for each type ?

I think we would need to factor inflation as the Su 30 mki earliest order with HAL would have been late 90's and last order a few years ago. So without year wise break up the costs are meaningless
Top

^^ They are talking about average cost of per unit aircraft and helicopter , The earlier made types will be cheaper than what it is made today at HAL but an average cost would be useful to find the unit cost.
Top

Austin, I wonder is the DARIN III upgrade has Glonass receiver. I note somewhere they mentioned will equip Jaguars.

Also other than Su30MKIs I don't know which planes can carry this heavy load.
Top

I am glad it is KAB bombs like I thought, they are rugged and usually work.

Its the aft or tail fuze that ensures it goes off unlike the British designed nose fuzes which are duds.
Top

ramana wrote:X-Posting. Some very good details in this report...

Vips wrote:India to Buy Smart Bombs Worth $200 Mln From Russia.

India will soon procure 240 smart bombs worth $200 million from Russia to boost its air power. On Tuesday, Indian defense minister Nirmala Sitharaman cleared the purchase plan of these bombs which will be used to hit specific targets with minimum collateral damage.

That comes out to be around $833,000 per PGM. Is that accurate? Might include other integration/accessories costs as well.
Top

Need to wait for official confirmation but here is a tweet:
Indian Air Force to upgrade Jaguar with new @Honeywell_Aero F-125N engine. The @IAF_MCC will re-engine around 100 of its Jaguar fighter aircraft deployed in Jamnagar, Gorakhpur and Ambala.

srai, Yes it works out quite high but look at it this way, KABL puts most of PAF hangers at risk. It will be one PGM one hanger. its not a puny explosive carrier.

dkhare, Yes its good news that govt has taken to re-engine the Jags.
Top

I suspect it is for decapitation strike on C3I.

Hangers go bye-bye! I doubt PAF has the budget to go hangar building with tons of steel on top.
Top

Ok, you dastardly curious ever questioning lot. I finally can confirm the IAF did in fact get more R-77s relatively recently. A parliamentary report from 2012 notes contract for RVV missiles for Rs 2800 crore. Considering each missile at a million dollars, thats still 560 odd rounds. Clearly, this batch is not the one flagged by CAG as defective, those were procured from 1999-2002.

So yes, India does have some newer R-77 stocks till Astra comes online, probably one of these items was shown on the Su-30 at the recent AF day.
Missile life is 8 years before refurbishment.
http://2.bp.blogspot.com/_44d3OT-xI3U/S ... R-77-3.jpg
Top

Thanks for digging that up Karan. Will make me sleep better knowing our MKI's aren't BVR nude.