The Military Issues & History Forum is a venue to discuss issues relating to the military aspects of the Indian Armed Forces, whether the past, present or future. We request members to kindly stay within the mandate of this forum and keep their exchanges of views, on a civilised level, however vehemently any disagreement may be felt. All feedback regarding forum usage may be sent to the moderators using the Feedback Form or by clicking the Report Post Icon in any objectionable post for proper action. Please note that the views expressed by the Members and Moderators on these discussion boards are that of the individuals only and do not reflect the official policy or view of the Bharat-Rakshak.com Website. Copyright Violation is strictly prohibited and may result in revocation of your posting rights - please read the FAQ for full details. Users must also abide by the Forum Guidelines at all times.
Post Reply
1343 posts

Thanks to BRF Members --> Ramana and Rupak for all their help.

Mods: Please update list below, as and when a new milestone is reached or updates need to be added. Thank You.

History of the Artillery Corps

The formal history of the Artillery Corps dates back to the formation of Bombay Artillery in 1827 and is nearly 200 years old. However the use of artillery guns in the Indian subcontinent is much prior to that. Gunner's Day is celebrated annually on September 28th and the motto of the Corps is Sarvatra Izzat-o-Iqbal (Everywhere with Honour and Glory). The HQ of the Regiment of Artillery is in Nashik, Maharashtra. The Regiment of Artillery has been decorated with 1 Victoria Cross, 3 Vir Chakra, 1 Yudh Seva Medal, 19 Sena Medal and 1 Shaurya Chakra.

The regimental insignia is a gun with the Star of India above it.

I will be adding more to this. Give me some time. Mods, please add to list - as you see fit - as it is not complete. All strength numbers are from wiki chacha. So please amend/advise if you have more up-to-date info.

The first post in this thread is only for reference based on open source information. I do not need to say this, but I will for the sake of clarity - no classified information please. Nobody cares, other than the enemy.

I have left some old artillery pieces out i.e. the 122mm/38 calibre D-30. They are being being replaced by the up-gunned M-46 I believe.
Top 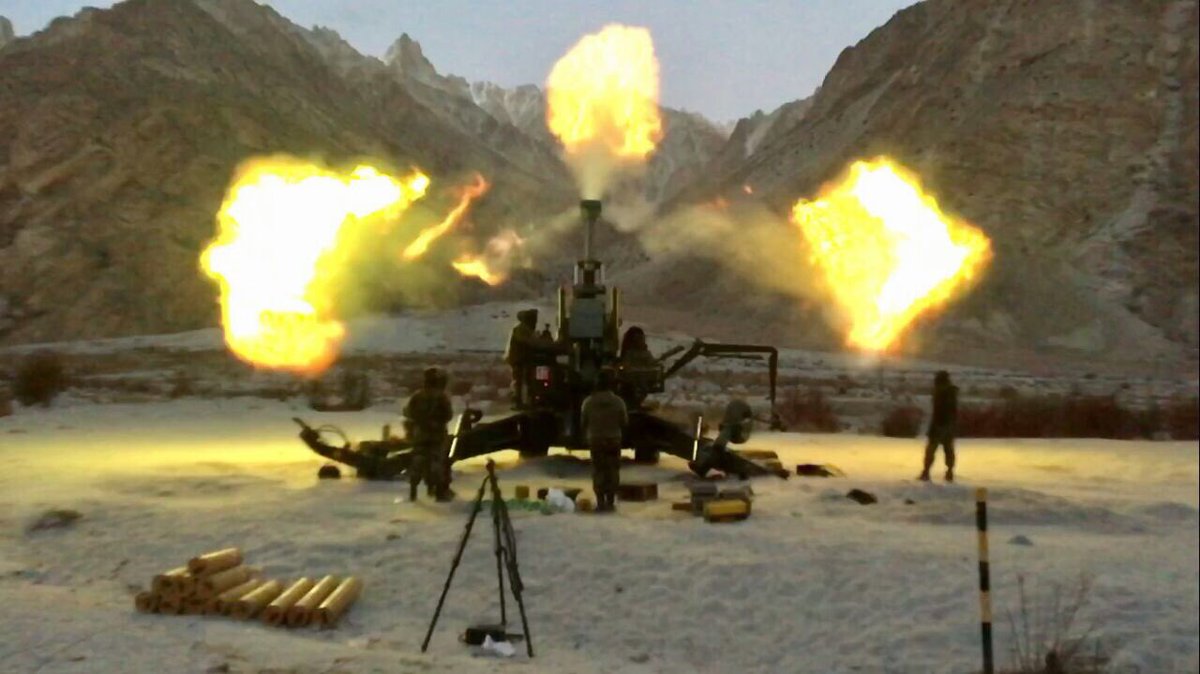 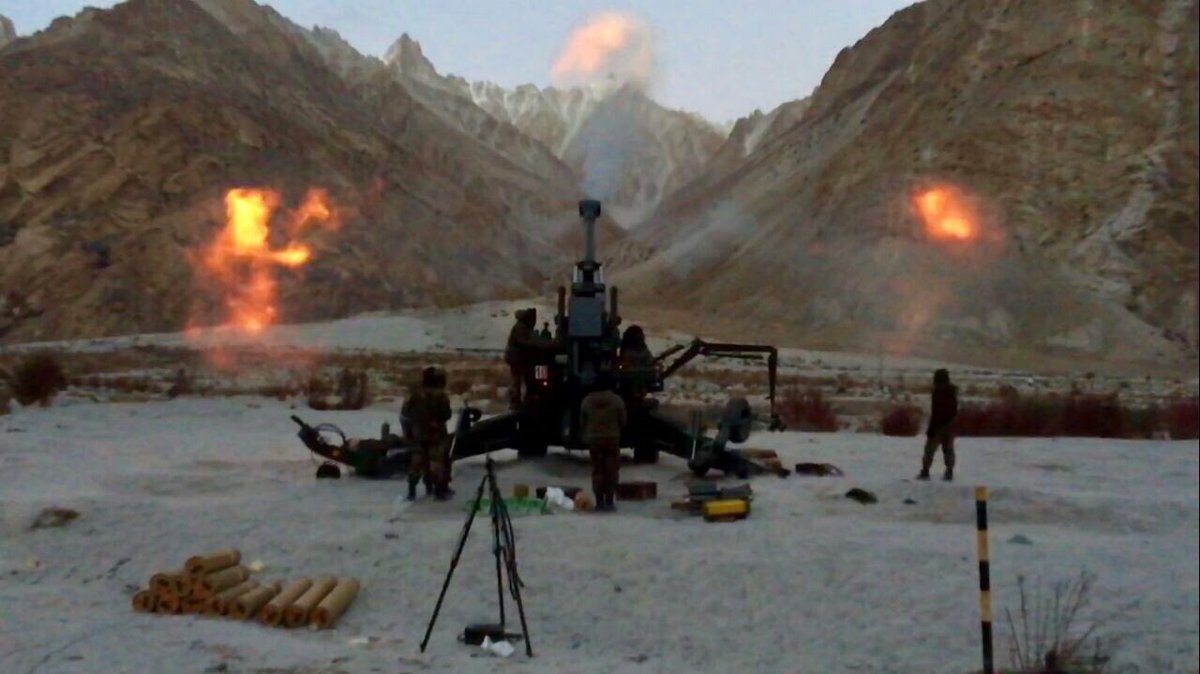 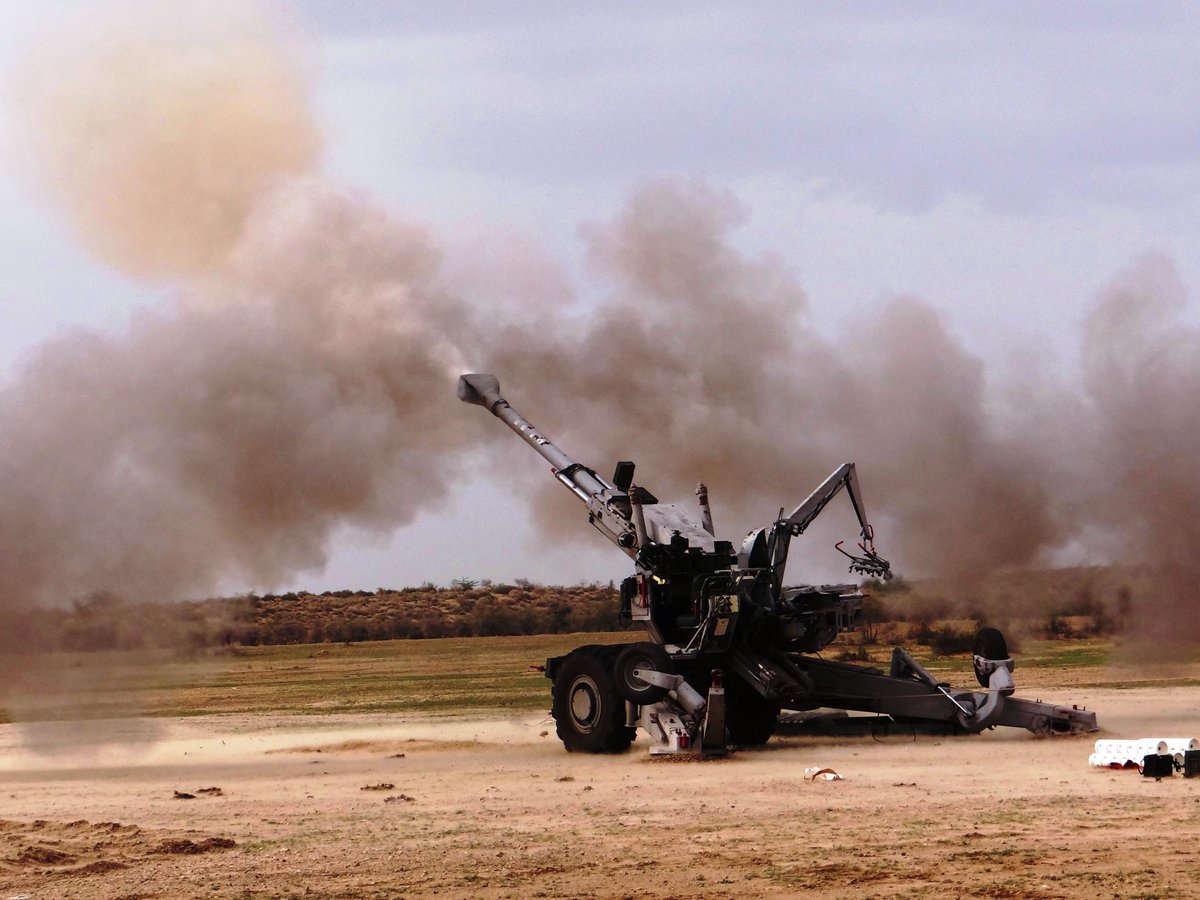 Rakesh This dated article from The Week
Shots on Target Finally

And wiki article says 414 Dhanush to be procured.

With regards to the total number of artillery regiments, I think you and Rupak are basically saying the same thing.

With regards to the Dhanush, I have made the change. Please check.

With regards to the M777, I have made the change as well. Please check. Do you know when the production run started?
Top

Or the 20 regiments will have the 105 mm IFG for deployment in mountain areas.
Top

Admiral since there is some much talk of armour and pakistani DCB's can we have a Engineers - News and Discussion topic as well.
Armour will do didly squat without the Engineers...
Top

ks_sachin wrote:Admiral since there is some much talk of armour and pakistani DCB's can we have a Engineers - News and Discussion topic as well.
Armour will do didly squat without the Engineers...

Sachin Saar, in my profile is my email. Can you email me please?
Top

Rakesh sir, are we looking to replace Smerch already?
Top

Not sure if posted here https://pbs.twimg.com/media/Dzx0HWIXcAMKuTp.jpg
Bulk production order of Dhanush
Top

So what is the time line for delivery of these 114 guns?
Top

Admiral saab, you missed 180 nos. 155mm/39 cal? soltam upgrade of M46 guns. Please add these to the first post. Also, Smerch is not going to be replaced by Pinaka-III. It will complement. Smerch is a recent buy. I thought the number of Smerch systems purchased was 36 and not 62. Was there a follow up order?
Top

First time I'm hearing about this... I thought they were just going to upgrade the original bofors (of course some Dhanush lineage is expected as it will be done be OFB).
Top

Aditya_V wrote:So what is the time line for delivery of these 114 guns?

Old thread had the schedule. Will dig up tomorrow.
Top

First time I'm hearing about this... I thought they were just going to upgrade the original bofors (of course some Dhanush lineage is expected as it will be done be OFB).

I doubt Dhanush will be replacing the original FH77Bs. More likely once the Dhanush production is over, the original Bofors will be upgraded to the Dhanush standard by OFB. Perhaps only about 250-300 guns might be upgraded (speculation). A few have been cannibalized for spares, over the years.
Even for the Dhanush, after production of the first batch of 114 guns is over, the next lot of 300 guns might be Dhanush-52, 155mm/52 cal version.
The prototype for the same is ready. The testing will likely commense once the production of the 155mm/45 cal version stabilizes and the internal testing by OFB is satisfactory.
Top

Also the numbers for Pinaka MK1 seem to be doubtful. As per Wiki, 4 regiments should be in service by now and an additional order of 6 regiments was cleared by DAC in 2016. Each regiment is supposed to have 18 launchers, plus reserves.
Top

Artillery gun Dhanush to be made in Telangana’s Medak

HYDERABAD: It’s going to be a boom time for the Ordnance Factory in Telangana’s Yeddumailaram in Medak district. Inwhat could be giving thrust to the Make in India initiative, ..

I don't know how this works. The first UET guns were made at GCF. Usually production line setup is and products qualified. Now starting the line afresh will lead to requalificationnas tooling and personnel.will be different.
I hope this is not another misstep by OFB.
Top

^ Saar, while you are right abt new line needs qualifying, it may not be very big issue.

AFAIK, the barrel forge and breech is made at OFB Kanpur.
A hammer forge (maybe from Austria?). And the furnaces for hardening and removal of barrel strain.

These were being sent to GCF, Jabalpur for assembly as Dhanush.

Same may now be diverted to OFB Medak, to optimise resources.
(Less severe qualification required as Parts from existing vendors, only change of mfg. site).

Recent news suggests that Jabalpur factory has its hands full in production of "Sharang", plus existing production like Carl Gustav, LFG/IFG, and batch production for servicing/maintenance of existing Army guns.
Top

Makes sense and could be spare capacity in OFB Medak.
Any transfer of mcg facility requires requalification is what was noticed in US.
Equipment and people.

The barrel and breech are remaining at Kanpur is good news.
Assembly is is a critical.
Top

I will remove the reference to Pinaka III replacing the Smerch. Thanks.
Top

They were blacklisted, and follow on order of 300 guns (total 480 planned in that phase) not gone through.

BTW Admiral Saab, can we select the mithai due to us ? Doodh peda? Champakali?
Top

Any pics of the 2S1 in the Indian Army? Couldn't find any through Google. In which year did we acquire them? Frankly was surprised to read it was in service with the Indian Army. Till date had only read about / seen the Abbot and Catapult in the SPG category.
Top

I will remove the reference to Pinaka III replacing the Smerch. Thanks.

Soltam upgraded 180 M46 guns to 155/39 caliber. At the time also OFB had shown its own version of the upgrade as well. It suffered a barrel burst during testing and Soltam was chosen for the upgrade. The actual plan was for 600 guns to be upgraded. 180 was the 1st batch, to be followed by another 420. Soltam got blacklisted subsequently and the follow on order was scrapped. Now it has been given to OFB for 300 guns, as Sharang.
The 180 upgraded Soltam guns are in active service.
Top

I have seen the soltam regt.'s in strange places, serving as div. arty regt. One of those I suspect was the first such unit to be raised
Top

^^ Soltam are definitely active, just their range is short of advertised range.
Top

Yes, i had already noticed that ... as do a few other websites (mostly inconsequential ones) ... but I highly doubt it ... would have surely seen or heard more of them if they had really been in Indian Army service...

prashantsharma wrote:Yes, i had already noticed that ... as do a few other websites (mostly inconsequential ones) ... but I highly doubt it ... would have surely seen or heard more of them if they had really been in Indian Army service...

Confirmed with an Arty officer.
We don't have these. The closest we could have come to would have been a demo in India.
Top

Ok. Man have ensured Arty is cut to the bone.
Top

To put it in perspective, the Bengal and Madras Native Horse Artillery and Rocket Troops were disbanded as early as the 1830s -- well before the Sepoy Mutiny of 1857 (Bombay Army never had a native horse artillery component). After the 1857 Mutiny, even the native field artillery regiments were completely disbanded and only a few mountain artillery batteries were retained. Only the war clouds of World War II forced the British to re-establish Indian field artillery and coastal artillery regiments. Sometimes I wonder if this had an enduring impact on Indian doctrine regarding the role of self-propelled artillery?
Top

looks like OFB has been cleared to produce the Electronic Point Detonation Fuze (PDF) to replace the M 572
The first batch was proofed successfully.
this will help replace the mechanical PDF M 572.
The BEL Pune facility has license mfg of similar fuzes from Israel.

The MoD report for 2017-2018 mentions this PDF and also the smart artillery shell aka PGK shell.

So we can soon expect trials of the PGK and then user trials.
Top

What time has it been since confirmed order, few weeks tops? And already Dhanush is rolling out of assembly lines

As per the video, OFB Jabalpur produced it. Earlier news had said that these will be produced at Medak in Telangana.

Are they creating two lines? Or this video is of previous piece used for testing?
Top

I posted this in the Balakot thread and it really needs to be here:

1. An order for 114 Dhanush have been placed, but according to the Government Gun Carriage Factory (GCF), the IA needs over 400.
2. Light weight and highly mobile.
3. It has a range of 38 KM and is 45 calibre. Bimodular loading/charging system for fast loading that doesn't exist in the Bofors gun.
4. Inertial Navigation System (INS - hopefully it can incorporate GAGAN and probably will), enhanced day/night vision camera and muzzle velocity radar (this is needed for accurate ranging - very smart of BEL). Knowing muzzle velocity accurately can pinpoint where the shell will explode allowing the use of shells with specific munitions - fragmenting, FAE, or NBC.
5. The enemy will shiver in front of the Dhanush.

The GCF should be cranking these out like cookies. Make 4000 of them and sell them around the world. Make in India and combat tested in the toughest places on earth!
Top
Post Reply
1343 posts

Users browsing this forum: No registered users and 30 guests