The Military Issues & History Forum is a venue to discuss issues relating to the military aspects of the Indian Armed Forces, whether the past, present or future. We request members to kindly stay within the mandate of this forum and keep their exchanges of views, on a civilised level, however vehemently any disagreement may be felt. All feedback regarding forum usage may be sent to the moderators using the Feedback Form or by clicking the Report Post Icon in any objectionable post for proper action. Please note that the views expressed by the Members and Moderators on these discussion boards are that of the individuals only and do not reflect the official policy or view of the Bharat-Rakshak.com Website. Copyright Violation is strictly prohibited and may result in revocation of your posting rights - please read the FAQ for full details. Users must also abide by the Forum Guidelines at all times.
Post Reply
898 posts

IMAGES: Roll out ceremony of the 51st K9 Vajra-Tracked Howitzer Gun at the Larsen and Toubro Armoured System Complex, in Hazira, Gujarat, by the Defence Minister Rajnath Singh. 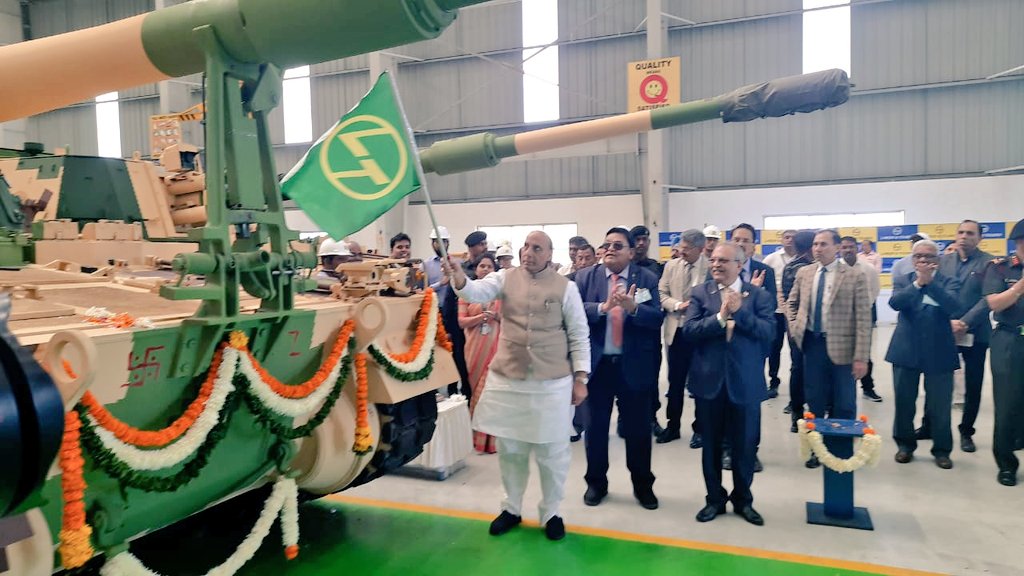 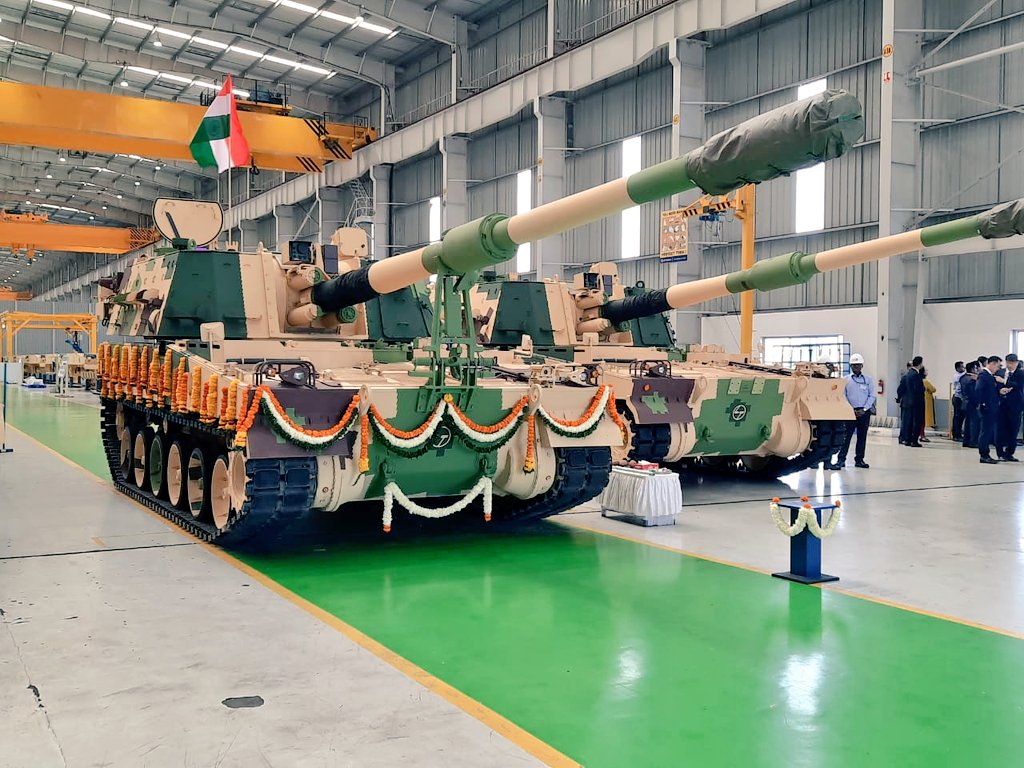 If we can progressively decrease manpower required by artillery even by 30% through automation, the savings could be huge...
Top

The person in sunglasses is AM Naik, L&T Chairman.
Top

Is the solution to a heavy gun simply a more powerful tractor?

ramana wrote:About 20 years ago I saw a hypersonic shell with built in ram jet in a US lab study. It's still not achieved and its thrown around as a venue to explore.

Right now ATAGS fires 5 shells a minute. That means 500 lbs. And with Time on Target method all arrive at same time. That's like CAS with the medium gun battery.
A few months or a year back I saw a report that said its weight was high and could use some reduction. I thought that was Gen Shankar's viewsand had reacted erroneously. Hnair went and found what rohitvats posted which I did not read earlier.
Gun accuracy comes with mass or weight as recoil forces are absorbed. So asking for weight reduction after gun trials is typical field trials input.

CDS will decide if the gun can be inducted and a future version could weigh less. Same as 105mm IFG

We have access to western, russian, korean kit. Could have easily build a IT outsourcing style tier 2/tier 3 ecosystem for component/system export.

We could have done, what Turkey is doing so well.

But then maintaining the jobs of DPSU lot is more than the nation.
Top

^^^
Koreans have kept a low profile. Hardly any in the photos.
Top

However unless its armed with CCF fuzes the accuracy at extreme range would be quite bad.

So watch for reports of imports from China.
Top

Purchase must be to account for the the fact that with the new OFB artillery pieces coming in, they outrange whatever pakis could throw at.
Top

Are you sure it is from Germany or was it rdm
https://quwa.org/2019/10/30/pakistan-air-force-chief-visited-south-africa/

The Pakistan Army reportedly bought ammunition of an unknown type from Rheinmetall Denel Munition (RDM). Interestingly, the 2017-2018 Ministry of Defence Production (MoDP) report lists a $2.6 million US acquisition for 891 HE ERFB-BBRA shells. The abbreviation appears to stand for “Extended Range Full Bore – Base Bleed – Rocket Assisted,” which means it is a velocity enhanced artillery projectile (VLAP)

There was an annual exercise conducted last week, ex topchi... Didn't see a lot of news or coverage.
Here's the only video or link I could find.

155 mm Sharang gun, with range of 39 kms, successfully test-fired; to be inducted into Army by March.

The gun, indigenously upgraded from 130mm to 155mm/45 calibre, has a striking range of 39 kilometres. Programme Coordinator (Sharang) Brigadier Jayant Kar said the first batch of 18 artillery guns will be inducted into the Army by March end this year.

The gun went through integrated firing check on different parameters ranging from 0 degree to 45 degrees on Tuesday at the Long Proof Range at Khamaria.

"The indigenously-designed Sharang will be inducted in the Army by this fiscal-end. The barrel of the gun has been upgraded from 130 mm to 155 mm and this has increased its hitting range by 12 km kilometres, to 39 kilometres," Brigadier Kar said.

The official said that Gun Carriage Factory (GCF) in Jabalpur had won the global contract to upgrade the Sharang artillery gun. The upgradation work was carried out by the GCF with the help of the state-owned ordnance factories, and teams from the Army and DRDO, he said.

The ‘Made in India’ artillery guns will be supplied to the Indian Army from Gun Carriage Factory, Jabalpur and the Ordnance Factory, Kanpur. Its commercial production is likely to begin soon.

The 155 mm Sharang gun is an upgraded version of Soviet-era 130 mm/52 calibre M-46 field guns. The original version has a striking range of 27 kilometre.

The Indian Army is expected to save Rs 100 crore annually due because of the indigenous upgradation of the gun.
Top

So these are proof testing by the OFB before delivery.
So a complex of OFB factories are working on final assembly and test of this order.
GCF, VFJ, OFB Khamaria.

Not only the range is increased but the shell weight is increased making it more effective.
the electronics makes it more accurate.
overall its a huge effective system.
Top

The ATAGS trials have stretched a little too long. Jingo is getting impatient. 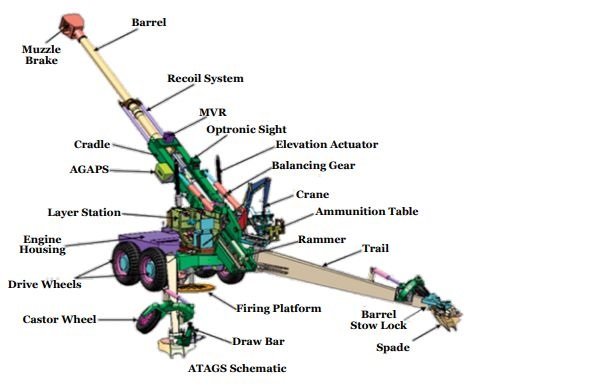 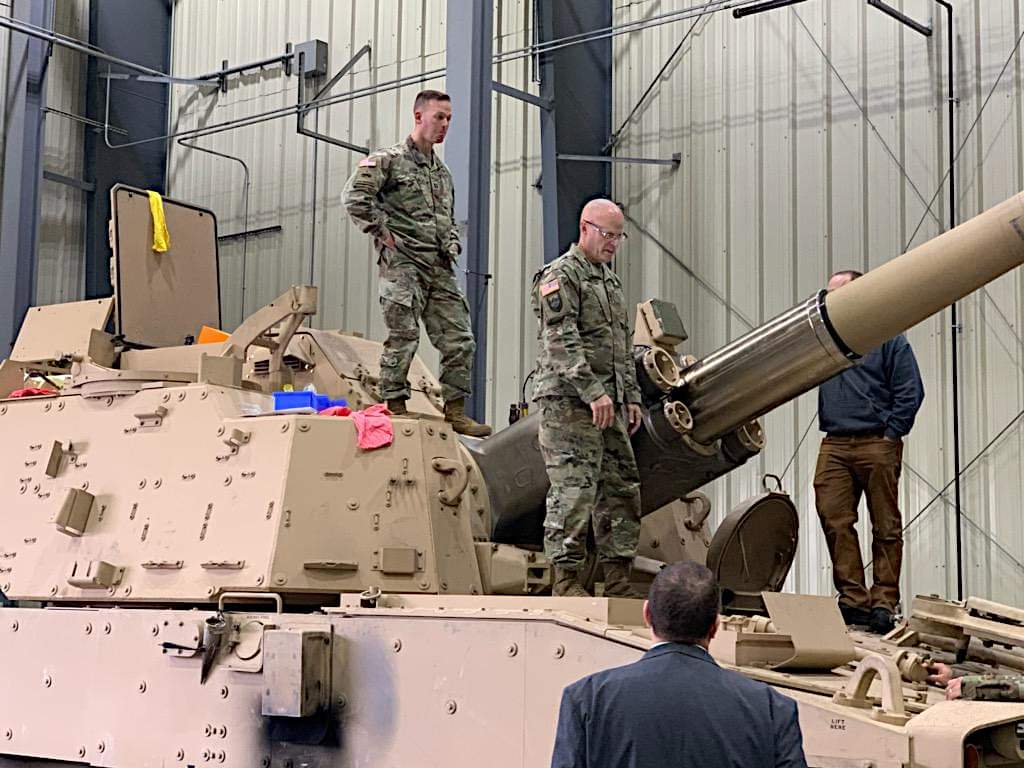 https://twitter.com/Aryanwarlord/status ... 9451958272 ---> AFAIK, Larsen & Tubro is now working with DRDO & Bharat Forge Ltd to completely indigenize the K9 by installing a variant of the ATAGS gun into a redesigned turret. The fact that it, like the Arjun, uses a hydropneumatic suspension and MTU engine isn't just a coincidence.
Top

The arjun catapult system was a good 10-15 tons lighter than Arjun mk-1. Add some weight for larger gun and turret and the weight should be in the range of 50-55 tons. Easily road transportable.
Top

In 2013 India had no factories building 155mm guns or ammunition. Today we have.

The arjun catapult system was a good 10-15 tons lighter than Arjun mk-1. Add some weight for larger gun and turret and the weight should be in the range of 50-55 tons. Easily road transportable.

You call me Saab...then I will call you Sir

Comments in tweet are not mine. I am just regurgitating the tweets.

Please see post right above yours. Exciting and interesting news if true!
Top 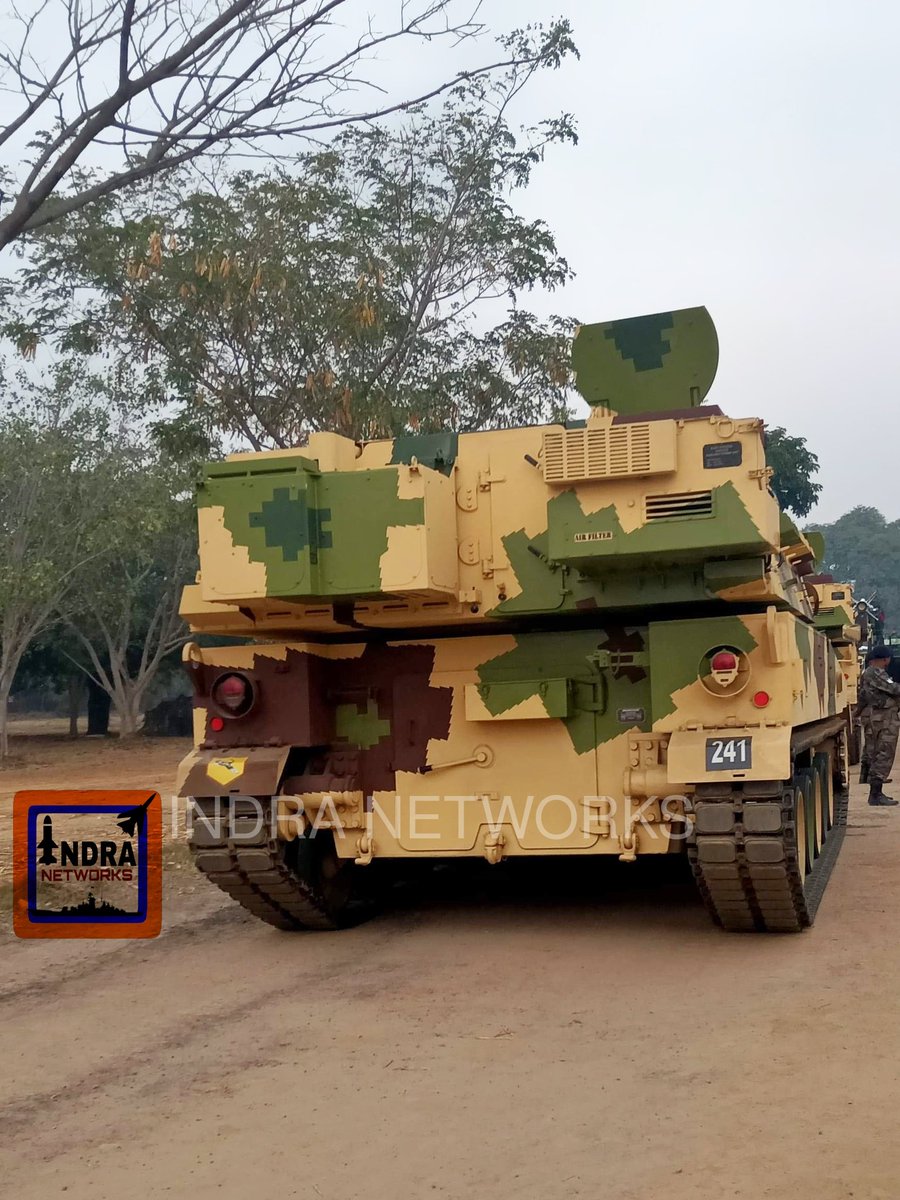 Gurus, please identify this gun mounted on the Arjun chassis.... 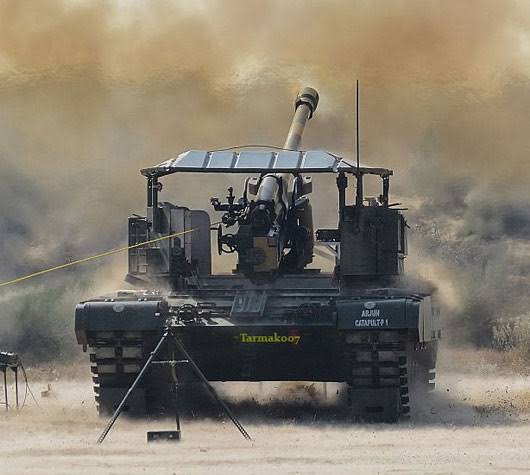 Catapult 130mm system. Was an attempt to give a new life as the older platform was too aged. Army didn't bite.
Top

Thank You Thakur. Greatly appreciated. On a totally different note, I cannot help but think (& thank!) the father of modern Indian artillery - the late Manohar Parrikar. None of this would have been possible without him. 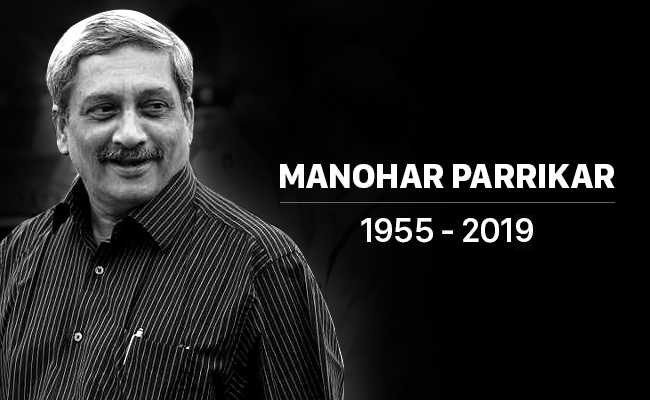 This paper always has some good coverage..

This is a beautiful news report.
Essentially Army has taken over the artillery program!!!!

All credit to Lt Gen Indian Artillery for persisting with the vision and executing it.

Kudos Lt Gen P.R. Shankar (Ret) for your faith in Dhanush, Sharang, Guided Pinaka. (Dont have proper emoticons!)
Truly brought back development and innovation back to the Army.
Stalin, a Commie, called Artillery God of War.

LPR(Long Proof Range) Khamaria and SQAE, Commandant, Brigadier Nishchaya Raut says, “Starting proof firing of high caliber guns made Jabalpur a complete defence industrial hub with the complete quorum of all the stakeholders required right from production, testing, approving and stocking of arms and ammunition. Along with the proof firing of indigenously developed Dhanush and Sharang, LPR is all set to proof firing of other imported guns for Armed Forces and private defence industries. It will save precious time, budget and manpower of the Ministry of Defence”. He added that Jabalpur is itself a hub of defence with the major establishments of Ordnance Factory Khamaria (OFK), Gun Carriage Factory (GCF), Vehicle Factory Jabalpur (VFJ), Grey Iron Foundry (GIF), 506 Army Base Workshop, Central Ordnance Depot (COD), Director General Quality Assurance (DGQA), Senior Quality Assurance Establishment (Armaments) (SQAE) with road, rail and air connectivity. After 14-month-long rigorous reconnaissance of range and finding its qualities, refining of range table, LPR Khamaria has been finalized for proof firing of high caliber guns with the help of DRDO, OFK, DGQA, WDET, ODC Kanpur and ARDE, Pune. Surprisingly, not a single pie of defence budget was used for starting proof firing of high caliber guns at LPR Khamaria.

Proof firing of Dhanush will also be started in city: Brig Bharadwaj DGQA,

Brigadier Ravi Bharadwaj says, “Russian 130 mm guns procured by the Indian Army were earlier developed as Soltam Gun with Israeli technology. Thereafter, the imported gun was handed over to Ordnance Factory Board (OFB) for indigenisation. Gun Carriage Factory (GCF) along with other agencies indigenously upgraded the 130mm gun system to 155/45 caliber gun as Sharang. OFB awarded a contract of upgrading around 180 guns and proof firing of two upgraded guns successfully carried out. Along with Sharang, proof firing of Dhanush will also be started in Jabalpur. Earlier, new gun systems were sent at Itarsi range for proof firing which took enough time and exhaust budget and manpower.

Brig Kar WDET, Director, Brigadier Jayant Kar says, “Indigenised production of Sharang and Dhanush are biggest success stories of defence production in the country. Dhanush is completely new gun which was upgraded version of imported Bofors gun from Sweden. Electronic upgradation of Dhanush was successfully carried out by GCF and Ordnance Development Centre, Kanpur. Sharang was fielded for integrated firing checks and all checks were successfully cleared in different degrees. Initially firing of four rounds from two guns each gave good results of recoil length for further test firing by crew members. Its credit goes to LPR Commandant for starting proof firing of high caliber guns in Jabalpur. We are hopeful that first regiment of 18 Sharang will be delivered by March 31.

Got this picture off Twitter. Looks like high angle firing of the upgraded M46 Sarang gun is difficult and a pit needs to be dug, to allow the breech sufficient room to travel for the recoil. Not a big deal. But there is a limit to upgrades! 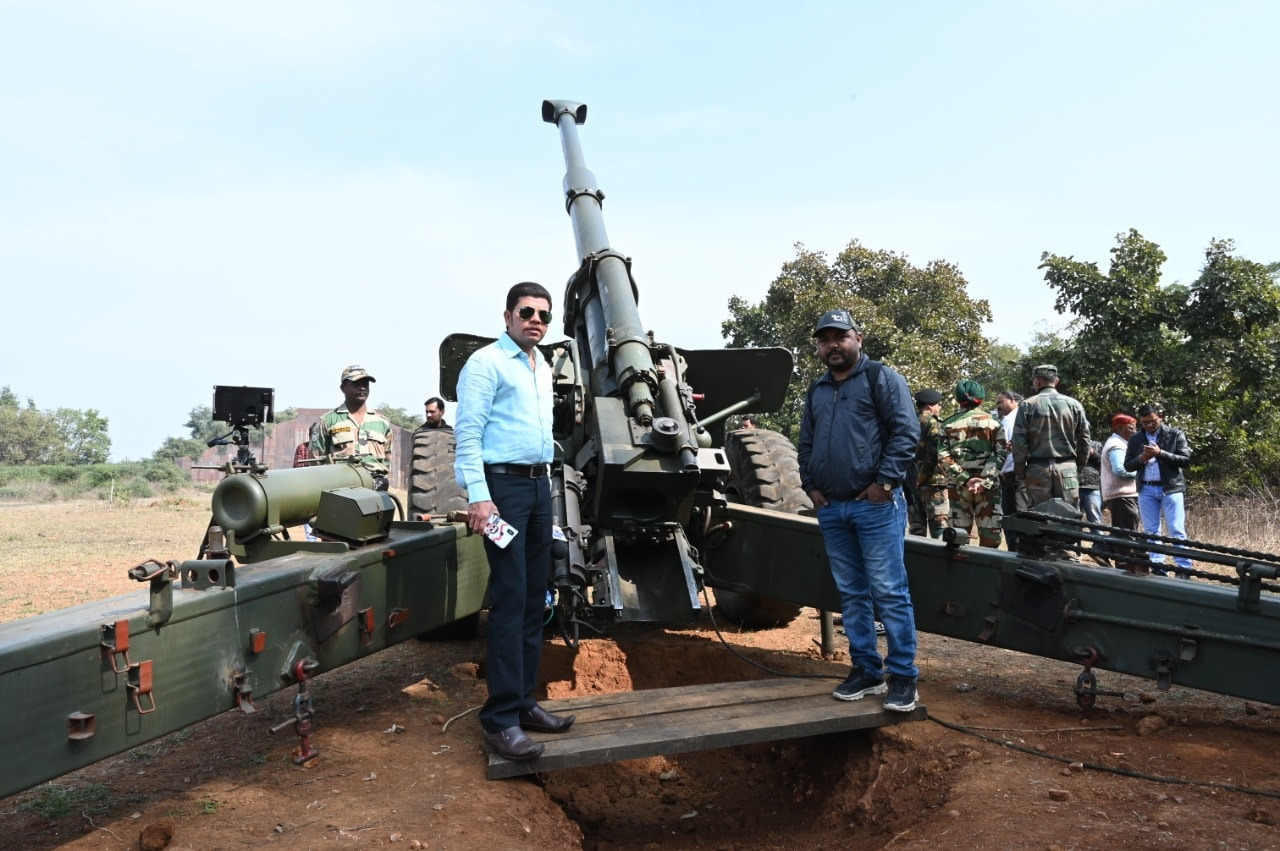 The limitation is due to the gun carriage of M46. Its more for gun role and less howitzer role.
The point of that picture is in a pinch high angle fire can be accommodated to clear mountain crests to engage reverse slope targets.
IA has very large stocks of M46 purchased after FSU collapse from Warsaw pact countries.
And upgrade costs are quite low.
Most likely the entire stock will get upgraded as its cost effective and is great for plains warfare.
Top

I aint complaining! Its much cheaper to buy a mini-excavator and dig a pit to accommodate the tube in short order rather than having to buy a new gun and its attended systems. One can see the compressed air cylinder to automate some of the systems on the gun. Its a better product than before and done in a budget that we can sustain! Nothing not to like!
Top

There is a photo of M46 placed on top of sand bags to give it the elevation required.

The will use similar mechanism.
Top 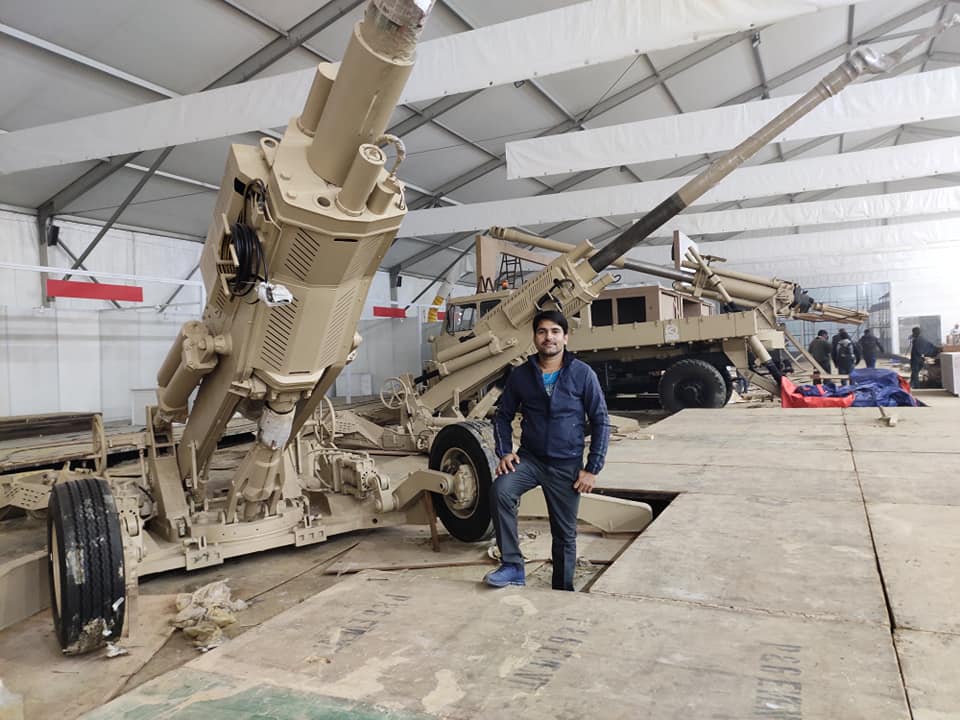 See in the rear, mounted gun too.
Top

sudeepj wrote:Got this picture off Twitter. Looks like high angle firing of the upgraded M46 Sarang gun is difficult and a pit needs to be dug, to allow the breech sufficient room to travel for the recoil. Not a big deal. But there is a limit to upgrades!

Will this allow firing up to angles of 70 degree ? Currently it allows firing up to 45 degree as per brochure which I think is on open lands without any adjustments like this required.
Top
Post Reply
898 posts