The Military Issues & History Forum is a venue to discuss issues relating to the military aspects of the Indian Armed Forces, whether the past, present or future. We request members to kindly stay within the mandate of this forum and keep their exchanges of views, on a civilised level, however vehemently any disagreement may be felt. All feedback regarding forum usage may be sent to the moderators using the Feedback Form or by clicking the Report Post Icon in any objectionable post for proper action. Please note that the views expressed by the Members and Moderators on these discussion boards are that of the individuals only and do not reflect the official policy or view of the Bharat-Rakshak.com Website. Copyright Violation is strictly prohibited and may result in revocation of your posting rights - please read the FAQ for full details. Users must also abide by the Forum Guidelines at all times.
Post Reply
2275 posts

^^^
What can they show for TLI and LOI? It is only sending of commands.

They might perhaps show Landing if they want to. Even there they might want to keep initial images classified.

BTW, Now the operations are not from SHAR .. they may be from ISTRAC/Peenya/Bayyalu.
Top

That was control room and burn placement
Top 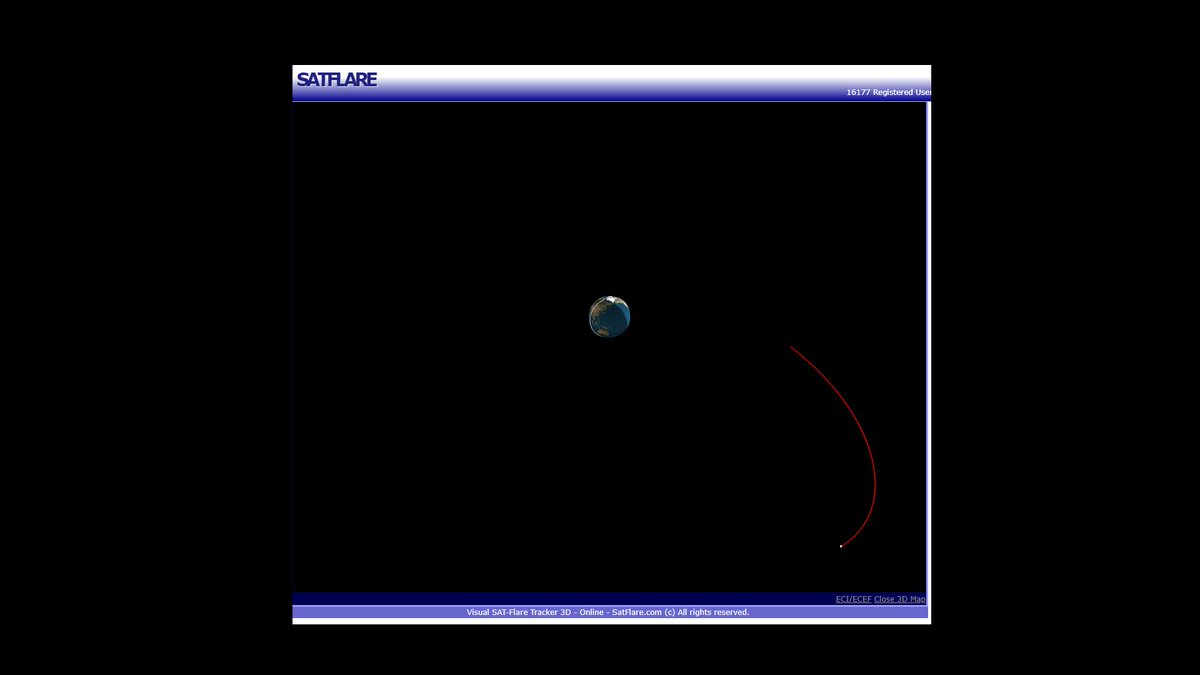 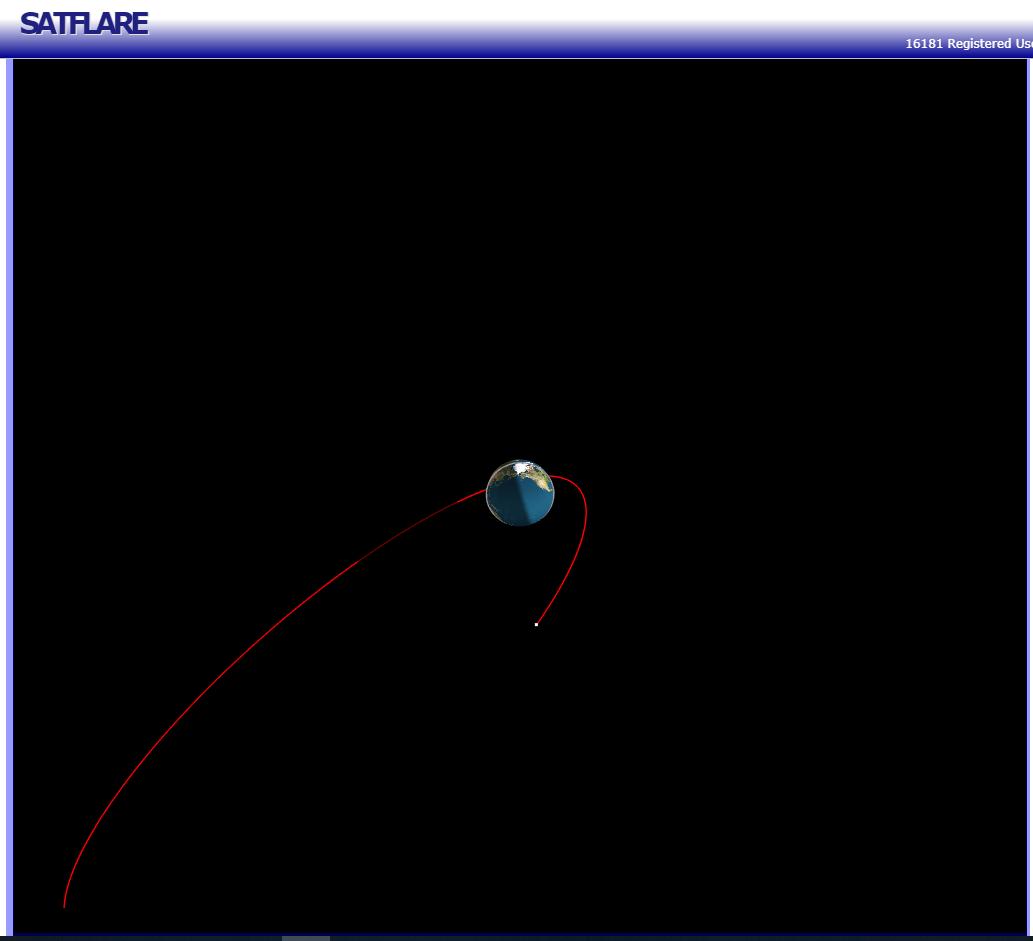 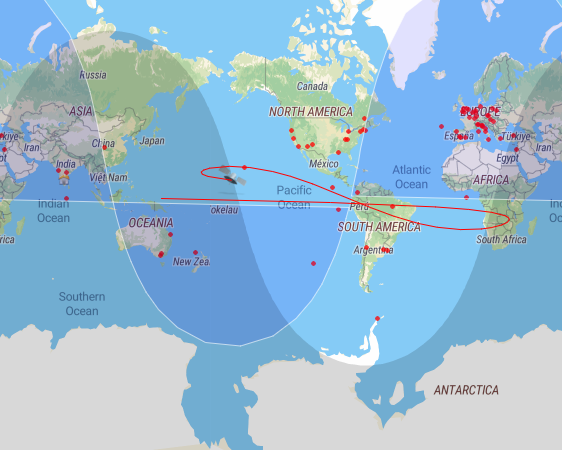 Got to recheck where the groundtrace of perigee point is. Is it over middle of Paciific ocean or over South America ? Seeing the ground trace it looks like over middle of the Pacific Ocean.
Top

^^^
Perigee is near SouthAmerica and North America join.
Aug 13 around 2105 UT
Top

Thanks. I was a bit confused seeing it heading to the middle of the pacific whereas the 3D animation on Satflare showed the perigee it over Peru like you said.
Moons orbit is around 5.1 Deg to ecliptic so they will need an inclination change too ? 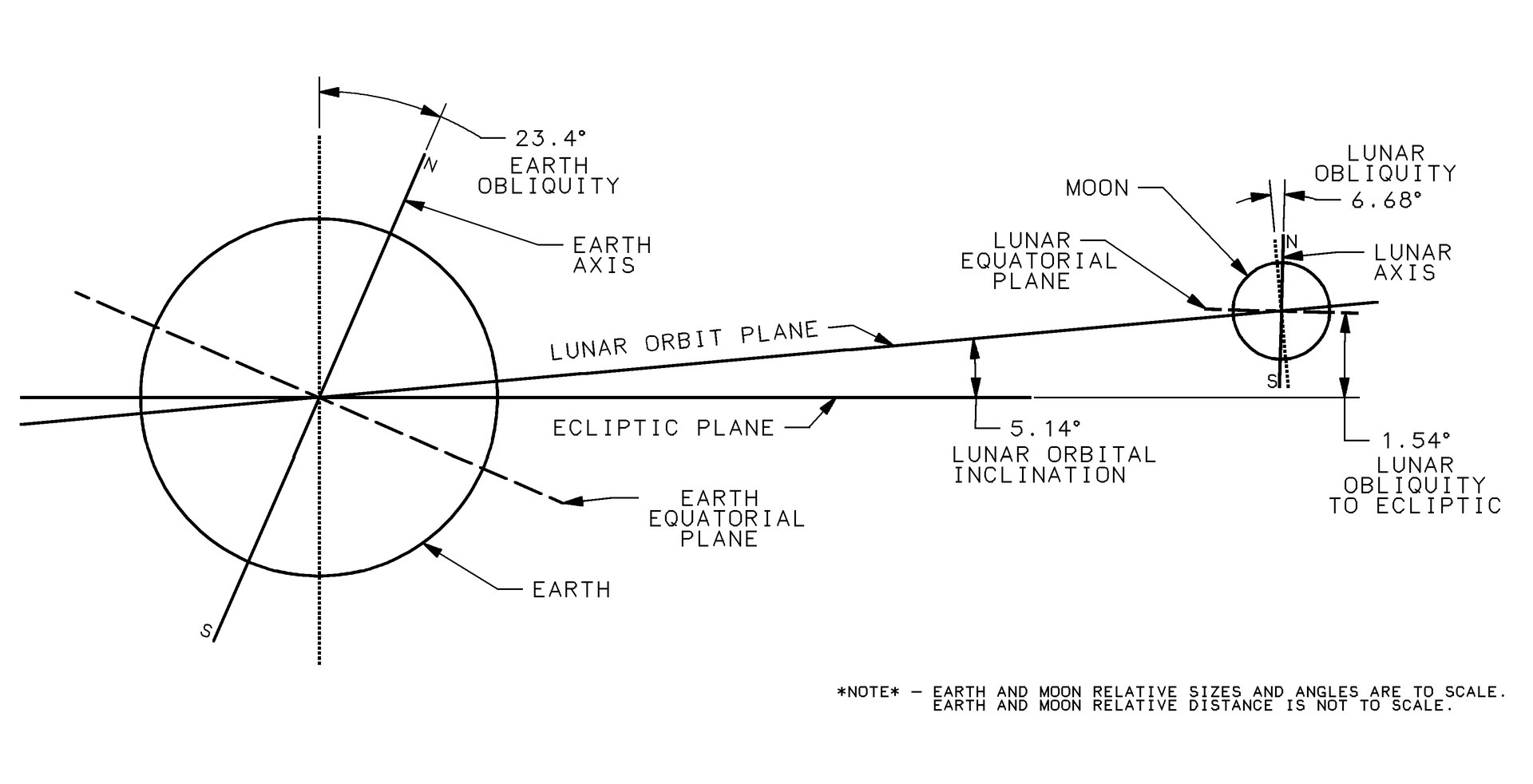 Or is the current inclination bang on to direct TLI ? (The argument of perigee that was set for the initital orbit and subsequentburns must have taken care of that isn't it)
Top

Is the point on the Pacific where the descending node point is ?
Top

https://www.n2yo.com/?s=44441 shows the previous ground track so they did do an inclination change with the last earthbound maneuver 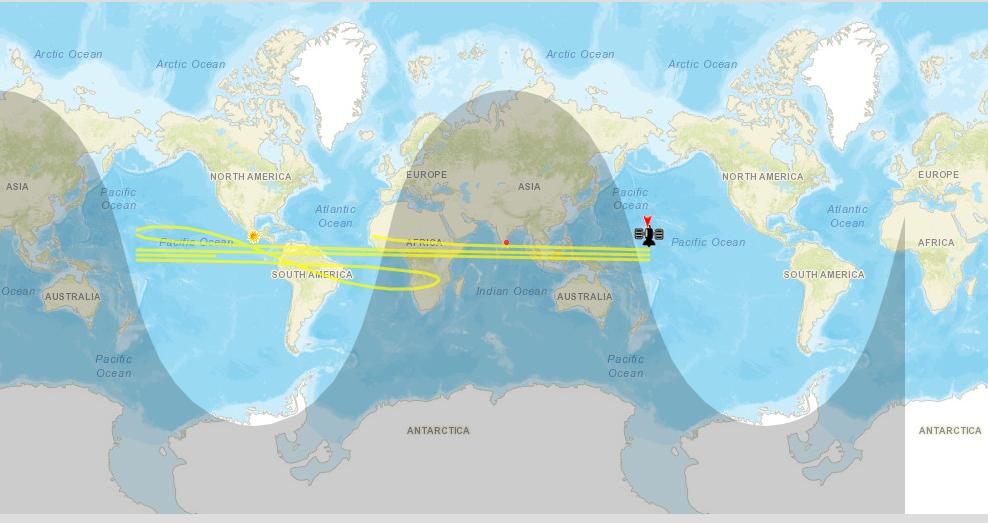 Congrats ISRO so far in the TLI.
Top

Continuing Chandrayaan 2 ( CH2 ) orbit details along with other other objects :

First a general view of a combination of Earth, Moon and CH2 orbits(after 5th ORM ) depicting
1. What would have been the undisturbed orbit if TLI was not done
2. Post TLI new orbit carrying CH2 from Earth's Gravity to Lunar gravity
3. Propose LOI 1st burn tossing the CH2 in 18000 kms orbit around Moon.

The Blue triangle is the Neutral Point where both Earth's gravity and Moon's gravity are equal andthe s/c enters Lunar gravity field.
This transition happens in the early hours of 17th August.

Notice how the craft nears moon and how the orbit inclination changes to nearly North-South after 1st LOI. 1st LOI sends the CH2 in 118km x18078km orbit around Moon.

Hello! This is Chandrayaan 2 with a special update. I wanted to let everyone back home know that it has been an amazing journey for me so far and I am on course to land on the lunar south polar region on 7th September. To know where I am and what I'm doing, stay tuned! 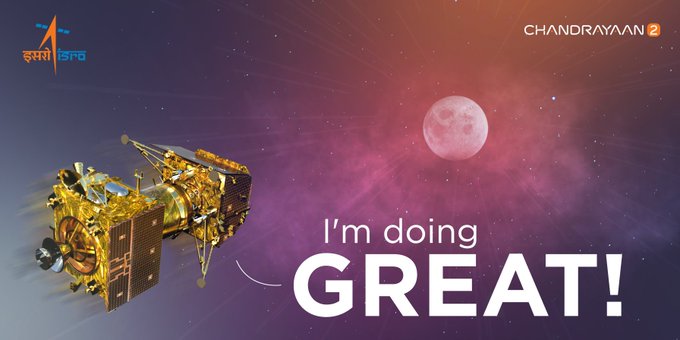 Lol ji, it's a bot or troll. If you want a translation, try google translator, but be prepared to

. My Russian ain't that good, so I can't fully translate (and I don't think a translation is desirable anyway), but we've been having a lot of this spamming in BR lately.

Don't respond to the trolls, the Cyrillic fonts are a giveaway. And don't click on the links unless you want some "good times" (think Vijay Mallya).

Surprising. When I had to register, I had to use a real email and wait for the forum moderators to verify me.

Seems like the spam bots have become very sophisticated.
Top

We have to look into how these things are getting through. Thank you for your patience.
Top

Indranil wrote:We have to look into how these things are getting through. Thank you for your patience.

Sir ji, the remaining title on that post in Cyrillic letters is itself pretty bad, you might want to delete that title or edit it in some way (if you can).
Top

Chandrayaan-2 set to reach Moon: Here's what happens after

BENGALURU: India’s second Moon mission, Chandrayaan-2, has completed most of its leg work and is set to enter lunar orbit on Tuesday (August 20), leaving very few operations to be performed before attempting to soft-land a probe on Moon in the wee hours of September 7.
Speaking to TOI, K Sivan, chairman, Indian Space Research Organsiation (Isro), said: “This will mark a major milestone for the mission and take us another step closer to landing our lander (Vikram) on Moon. All the preparations are as per schedule, and the spacecraft is healthy and working as per our plan.”
To achieve the lunar orbit insertion, Isro will be first rotating the spacecraft by 180 degrees before igniting the onboard propulsion systems.
“The satellite will be moving in one direction with a certain velocity. To allow it to be absorbed by Moon’s gravitational force, we need to reduce its speed. And, in order to achieve that the thrusters need to be retro fired (in the opposite direction), which is why we have to rotate the satellite,” a scientist monitoring Chandrayaan-2 from the Isro Telemetry, Tracking and Command (Istrac) centre in Bengaluru told TOI.
Once Isro successfully completes the lunar orbit insertion scheduled for Tuesday, the space agency will perform four more manoeuvres on August 21, 28, 30 and September 1, to take the spacecraft to lower orbits and eventually make it settle in an 100kmX100km orbit, where it will spend the rest of its life.
After the last manoeuvres on September 1, Chandrayaan-2 is likely to be in a 114kmX128km orbit. Once it enters this orbit, Vikram, which is carrying the rover (Pragyan) inside it, will separate from the oribter four days before the landing date.
“The final descent of the lander will be 15 terrifying minutes for us, as it is something we’ve never tried before. It is one of the most complex operations we’ve ever handled,” Sivan said.
15 Terrifying Mins
After separating from the orbiter, Vikram, will need to reach an orbit that is 30kmX100km orbit around Moon.
From a 30km height Vikram will start the descent and 10.3 minutes later it would have dropped to reach a height of 7.4km from the lunar surface.
In the next 38 seconds, it will further reduce the speed and reach a height of 5km from the lunar surface, and the next 89 seconds will see Vikram further reduce altitude to 400m from the lunar surface.
At 400m height, Vikram will hover for about 12 seconds to collect some data from the lunar surface. After the hovering, it will further reduce its altitude in the next 66 seconds, to reach a height of 100m from the lunar surface.
When it is at this height (100m) height, Vikram will hover for about 25 seconds where it will decide if it must land on the first preferred site or the second one. Its onboard instruments will tell Vikram what to do.
“If it can land on the first site, Vikram will, in the next 65 seconds, reach a height of 10m from the lunar surface directly, significantly reducing its velocity too; it will be a vertical descent,” a scientist who was part of planning the landing profile said, adding: “In case it has to pick the second landing site, it will use 40 seconds to first descend to a height of 60m, then, further drop down to 10m in the next 25 seconds.”

From the height of 10m, it will take Vikram 13 seconds to touchdown on Moon. “During all this time, all five engines of Vikram will be running. As per initial plans they were to be turned off at the height of 10m, but now we’ve decided that the engines run until the touch-sensors tell them to shut off once all four legs of the lander have touched the surface,” another scientist explained.
Vikram will send the first pictures some 15 minutes after the touchdown and about four hours later, Pragyan will crawl out of the lander.

N00B question, what happens if Vikram lands and one of the legs doesnt make surface contact? Sort of when 3 legs touch the surface but due to an undulation the 4th leg doesnt? If I were to hazard a guess there would be logic which calculates the proximity to surface and an algoritm decides if the engines are to be switched off.
Top

Just a guess: there could be fine adjustment protruding pins on each leg to stabilize.

A few years ago an ESA spacecraft which was on a unique mission of landing on a comet head met such a catastrophe when it tipped and fell in a trench killing the mission.

I am sure that ISRO would have learnt a lesson from it.

From what we see in the above post .. Sivan explains that it is not a simple soft descent... It is an intelligent deciding engine working on several ' if not this then ' algorithms.
Top

SSSalvi wrote:... Snip ...
From what we see in the above post .. Sivan explains that it is not a simple soft descent... It is an intelligent deciding engine working on several ' if not this then ' algorithms.

From the first "trailer" video released by ISRO, I thought there was a bit of visual mapping and AI, on the fly, to complete the descent and soft landing on the surface?
Top

The trailer video did show the methodology. But the
recent briefing gives more numbers.
Top

I could not watch the live press meet. Was it streamed?
Top

The news conference is too good.....good for aam admi.
Top

A good explanation about the reason for including the central engine - to mitigate the updraft of lunar dust, by switching of the peripheral engines, during the last few seconds of landing.

This was new to me, a nice informative press meet.
Top

There were a couple of occasions when Dr Sivan was asked about how the landing date was maintained even though the launch date slipped by a week.
It was my understanding that this would be done by reducing the number of orbits around the moon after LOI was achieved. But Dr Sivan did not mention that at all, instead he talked about the time of TLI being adjusted. I wonder what is the real situation.
Another question I have is regarding the orbits. If I am not mistaken, there is not much inclination between the equatorial planes of earth and moon. Since we need to be in polar orbit around the moon, if we launch into polar orbit around the earth and then do the transfer to moon, we will arrive very close to polar orbit around the moon. Is this what was done? Was Chandrayaan 2 launched into polar orbit around the earth? This would make sense of what the chairman said regarding correction at perigee to achieve exact polar orbit around moon.
Another piece of info is that there is some possibility that systems on rover and lander may survive beyond 1 lunar day, since they have been tested to that temperature, but it is not guaranteed.
Top
Post Reply
2275 posts