The guy on the extreme right looks like a Paki/Lizard hybrid. The process has started. There is a drastic shortage of ladies in lizardland. The vassal state should so oblige
Top Spoof of Paki ad in WSJ Caption time:Female supporters of Jamaat-i-Islami (JI) hold placards and banner during a protest regarding the Lady Gaga's on stage costumes and its influence on future Londonistan terrorist oops Brit Paki youth PHOTO: AFP/FILE ya allah, nab i no, how terrosist afridi felt
Top

One out, 10 more still inside

Ya-allah thiz Ombaba is such a raa agent, bewaakuf rejected to GUBO the grate Gila-nahi who is taller, tighter and fairer than Ombaba hisself. Naav Gila-nahi is sending his eshspecial heera from mandi's of la-whore to bliss the potus gottas.

I hope the potus does not get aphred oph her testosterone philled voice.

Pak PM calls off US visit after Obama refused to meet: Report

raa agint SSridhar in Bakistan decerating thread wrote:PR was planning to buy Chinese locomotives (even after most of those bought earlier became junk very quickly) when the Americans intervened and complained bitterly that they were being neglected. Then GE entered the fray. While Pakistan should not buy the Chinese junk, they should not also buy the fanciful GE engines which would be too sophisticated for Pakistani engineers and too costly to buy and maintain. I have a suggestion. The Goldenrock Railway Workshops at Trichy converts very old metre gauge engines into broad gauge ones and exports them to Sudan, Ghana, Chad etc. Pakistan should go only for these engines as they will be cheaper to buy and operate. While they would still be sophisticated for PR engineers, it can be overcome through rigorous training through Hindi. For any repairs, they can always turn to nearby kufr India.

Bhat one take to pe Bakistan coach?
Be in touch with your feminine side, says Imran Yusuf
What does the ideal candidate for coach of the Pakistan cricket team look like? First and foremost, he is actually a she. I envisage a stocky little thing, clad in an elegant shalwar-kameez, with deceptively strong hands, and a faint whiff of garlic, ginger and menopause. Pakistani men are second only to Italians when it comes to loving their mothers. A nurturing, commanding maternal figure would immediately quell the rank indiscipline that has afflicted the side for two decades.
She has done voluntary work for an NGO in Balochistan, is politically neutral on Kashmir

, and went to boarding school in England.

^^^ i think they are very well trained in botty banditry!
Top

A nava yet identified sooper hero. 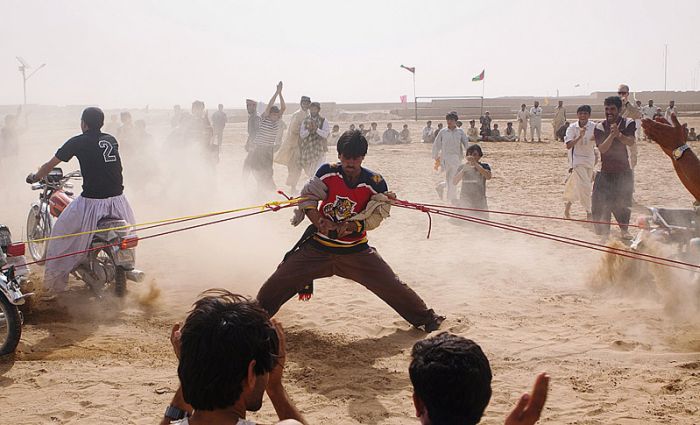 On second thoughts, I soch that the robes should hab been 18-20 inches pelow and on the packside
Top