JayS wrote:I am sorry but I do not agree to this bump motion. In my opinion it will be a stable elliptical orbit for case A only the major axis no more aligned with Y-axis (in the co-ordinates I described). ...

Please request to check my later posts after that 'bump' post. I mentioned it will be a higher orbit and not a 'bump' as in a 'n' bump (initially I referred to that and later corrected subsequently)

Of course thinking about it further., all the cases can be collapsed into the following:

The quantum and duration of thrust is not known., so in case D - it just lowers the orbit and does not degenerate to the point of falling down to earth as I originally stated.

AmberG., you can close this discussions after you post your view.
Top

Going back to usual programming:

here seems to be no limit to space investigations, it seems. Director of the Indian Space Research Organisation (ISRO) satellite centre, Mylswamy Annadurai, has revealed that the space organisation is planning to launch four more key satellites in the coming three months.

Speaking to the media on the sidelines of a private college function here on Saturday, Mr Annadurai said that India has launched 10 satellites between August 2015 and August 2016, adding, four more launches-INSAT-3DR and SCATSAT-1 on September this year, GSAT-18 in October and ResourceSat-2A in November 2016, have been planned by the space body that is working for a tight schedule of 70 satellite launches in the next three years, Deccan Chronicle reported.

Since it has been decided that Chandrayan-II will be India's solo project without any aid from the Russian space agency, the launch of the indigenously built lander and rover was expected to take place by the end of 2017 or in the first quarter of 2018.

As per the Deccan Chronicle, the mission objective of Chandrayan-II is to soft-land at a suitable site on moon’s surface and carry out chemical analysis.

According to Annadurai, ISRO also has a plan to launch ‘Aditya-L1’, the first Indian mission to study the sun by the year 2020, said Deccan Chronicle reports.

1. Glad that the Ruskies are out from the rover project. ISRO needs to do it on its own and for thermal management., if it needs to obtain polonium from BARC, so be it. It will be interesting to know how the heat management in rover works.

2. Aditya is as much important as going to moon.
Top

One can see that for a typical satellite, it is not a tick-tock tick-tock quick oscillation like a pendulum clock, but rather a pretty leisurely one with a period of approx 4.5 earth days!
Last edited by vina on 21 Aug 2016 21:30, edited 1 time in total.
Top

Thanks JayS, SSSji and others. Of course, JayS (and others who gave the same answers) is correct. SSS / JayS's posts are clear enough but let me add my comments as I said I would.

The problem is actually very simple -- (yet illustrate basic physics).

Since the sat (after the delta-V is given) encounters no more outside force (except gravity - and we are ignoring things like air drag, gravitational waves, solar wind, collision with space trash ityadi

in EACH case the orbit will be, obviously,... Ellipse!

(Obviously delta-V is too small to reach escape velocity so, as SSS pointed out, no hyperbolic orbit - also remember circle is a special case of ellipse and any ellipse whose perigee is less than radius of earth will crash on earth)

If you want to calculate/estimate "how much" it too is VERY easy if one just uses the most basic concepts/formulas. (see below for details)
Note: Please note: By higher orbit, we mean average of perigee and apogee (also called semi-major axis of ellipse) is greater. The time period of the orbit is *longer* here. Time period, BTW depends only on semi-major axis and thus for any elliptical orbit it is same as equivalent circular orbit whose radius is equal to semi-major axis)

***
If you want to visualize the shape or calculate the numbers, just look at SriKumar's one of the very first post where the discussion was started in the first place a few months ago.

Easiest to work with is the formula:
(Assume M is mass of earth, G is gravitational constant, a=semi-major axis (=average of perigee and apogee), r = distance from center of earth, v= velocity of sat and assume the mass of sat=1 unit)
Energy = KE+PE = (1/2)v^2 - GM/r = -GM/2a

Rest is simple, first for circular orbit - substitute r=a=radius_of_earth+500 in above to get orbital velocity v (it will come around 8km/sec). Let us call this value = u=8000 m/s.

So the answer in clear terms -
Case A - Slightly elliptical orbit, slightly higher (average of perigee and apogee height from ground ~ 501 Km, perigee about 470km) . Time period is increased by about 1 second. (JayS is right about shape and orientation - see his post).
Case B - Same perigee, higher apogee (about 840Km), average about 670Km. Time period increased a by about 3 minutes.
Case C - Same apogee, lower perigee (about 160 Km above earth's surface -- still will avoid hitting earth

(For some, it may be some what counter intuitive that a higher orbit is achieved, and it does not matter if you shoot up or down

(All the above values I calculated just now without a calculator (or even a scratch pad - I did the calculations while typing) so results may be a little off ( within few %) but it should not change the basic concepts)-- perhaps someone can feed the data in computer and draw.

Firing thrusters up and down is essentially mimicking the r bar approach to space rendezvous.Firing down will cause a higher orbit but slower velocity so the spaceship will move to a higher orbit but phase back. These are all stable circular orbits bring maintained. This is how orbital rendezvous is planned (Buzz Aldrin's theses) That is how a chaser fires tangentially and goes up but has to hire back radial thrusters to come back in phase with the target vehicle in a v bar approach. Boarded plane so signing out

Classic example of Case B., is transfer from GTO to GEO where LAM firing(s) are made. Case C is of course the reverse., again SRE is an example for case C.

Case D: was the most counter-intuitive. Thanks Prasannasimha'ji for explaining the reasons for Case A/D.
---
PS - discussion for nukkad thread: Is it possible to be bad at geometry/trigonometry and still be good at math?

Without comments/conclusions .. purely graphical presentation when impulses are applied to increase the velocities by 0.5 kms per sec as shown in following table.

Original orbit ( actually one of the Cartosat ) is in Light Blue, X increment is Red, Y in Green and Z in Purple.

Since the result is available in graphic there are no observations/comments from my side. It is left to reader to draw conclusions.
Of course I am open to answer queries/numerical values. 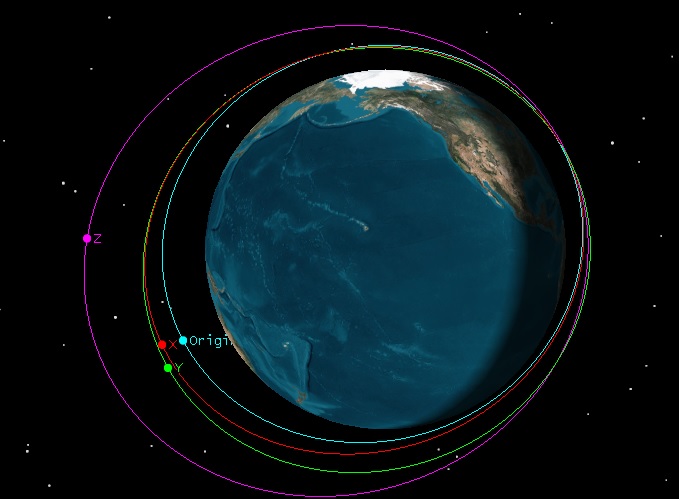 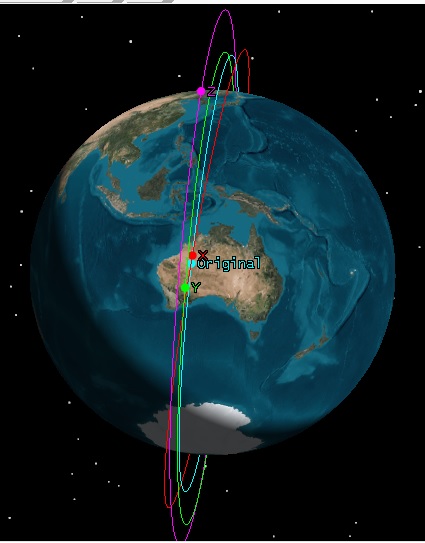 "Speaking to the media on the sidelines of a private college function here on Saturday, Mr Annadurai said that India has launched 10 satellites between August 2015 and August 2016, adding, four more launches-INSAT-3DR and SCATSAT-1 on September this year, GSAT-18 in October and ResourceSat-2A in November 2016, have been planned by the space body that is working for a tight schedule of 70 satellite launches in the next three years, Deccan Chronicle reported."

Reassuring news! I was wondering what became of Resourcesat 2a, now it's going to be launched in November, after an independent launch of Scatsat.
Top

@AmberG
Thanks for the great Q&A. I did make a mistake with Case D. Didn't realise it will be just the mirror or Case A with same semi-major axis. I thought it will be lower. Also I underestimated the effect of 100m/s delta_V big time in my mind.
Top

SSSalvi wrote:Without comments/conclusions .. purely graphical presentation when impulses are applied to increase the velocities by 0.5 kms per sec as shown in following table.

Thanks. (But are X,Z are reversed in your picture?). If you have time can you check if my numbers are correct (approximately). (As I said I just estimated and really did not use a calculator or pen/paper) TIA

JayS wrote:@AmberG
Thanks for the great Q&A. mistake with Case D. Didn't realise it will be just the mirror or Case A with same semi-major axis. I thought it will be lower. Also I underestimated the effect of 100m/s delta_V big time in my mind.

I think the orbits in most probability stable, but I really do not know LEO region that well to make any firm comments without actual calculations.

Even for LEO (200Km) a typical sat is not going to decay and burn/fall down to earth for thousands (prob. much more) of orbits.. not something to be bothered about at least for a fun brf problem to show basic points

^^^
1. The delta V impulse is applied on the back of earth in 2nd figure ( right edge in 1st figure ). From there the sats are moving North ( CCW in 1st figure )
2. The X velocity vector is -ve in original original orbit ( -2.333 in table ) and I blindly added +.5 kms/sec
3. Will post again regenerating by choosing all +ve velocities points and with a 1 km/sec increament

I am more interested in seeing what happens to orbit shape with + and - increments as you had asked in original query .
Top

Any idea why the ISRO facebook page has not been updated, or seen any new discussion/information, since the June 22nd launch? I'm pretty sure I'm looking at the right facebook site. Don't tell me people only post on it when there's a major mission on or pending!
Top

Facebook of ISRO made its appearance during MOM launch time. It was active till the MOM was placed in Martian orbit. Then it suddenly dried up.

I later came to know that it was being managed by a person who was previously heading training division of a Remote sensing department ( headed by previous chairman ). I too had arranged a few training courses for some specialized persons and had a chance to see the dynamism of him.

Perhaps he could have been put in some other deptt because at that time the ISRO Facebook was very very popular and many wanted to know who was behind its great outlook.

Otherwise ISRO PR is very poor so facebook is now back to where it was prior to MOM .. dead!!
Top

wrt to <this> I hoped some one will check check the calculations (I did the calculations while typing without calculator or even scratch pad - and used rough values of constants like Earth's radius etc). I did later checked, the values are correct (within 5-6%) . With using more precise values of G, M and R etc with case B and C the difference of - is about 180Km (instead of my value posted of170Km). With Case A and D -The new value of average distance is 501 Km -- in short as posted before. There is one slight error, the perigee (in case A (or Case D) comes to be about 420 Km. This is just if someone wants to check/verify their method. (I also checked with an existing delta-V calculator which gives the same values). I may put an extremely simple geometrical way (the one I used) to intuitively see and calculate these kind of values.
Top

Users browsing this forum: No registered users and 25 guests