Mods, IMO, the casuality number of this attack is so big that I felt it will be better to have it's own thread.

The link has the video:

Posted this on Afghanistan thread, on Feb-02

nam wrote:Based on history: Parliament attack and 26/11 happen around time Pak got IMF coffers opened up for them...

Something to look out for..

This is the first car bomb attack on Indian soil, hunch says this has been triggered to show Modi as weak leader before India's election as any action takes time.
Top

350kg of explosive was used in a scorpio suv. not details yet on what grade.

palestini terrorists once used a 100kg buried explosive to destroy a 70ton merkava tank, so 350kg vs a thin skin bus has shredded it.
Top

This is the first car bomb attack on Indian soil, hunch says this has been triggered to show Modi as weak leader before India's election as any action takes time.

He is not as important as the Paki Miltary or even MBS.
Top

Who the hell is MBS?
Top

Should check feasibility of using NGARM with 100+ Km range to take out Masood Azhar, his brothers and top leaders of Jaish , when we have intelligence of them being together. Such a surgical strike would really send a message and send shivers down the spine.
Pakistan would scream about sovereignty and crap and about striking back, but all terrorists would be on notice.

The princling from the Gulf who has landed in the land of the pure.

Menwhile, lets not put artifical deadlines, Pakis will be ready right now. Let us leave it too the forces to do the retaliation at the time and place of our choosing, we should not restrain them.
Top

Katare wrote:Who the hell is MBS?

Mohammad Bin Salman who murdered the journalist in Turkey. He is defacto ruler of Saudi as his father (the king) is on bed.
Top

unfortunately Modi's tough image has taken big dent with this attack and he is caught between devil and the deep sea, pakistan is ready for retaliation now and delaying will anger people jeopardising poll prospect
Top

IndraD wrote:unfortunately Modi's tough image has taken big dent with this attack and he is caught between devil and the deep sea, pakistan is ready for retaliation now and delaying will anger people jeopardising poll prospect

there is no need to score resounding self goals with statements like that.
people need to have some reasonable faith in their own elected govt to do the right thing even if not immediately.
Top

And why does retaliation has to be like last time? How will bakistan defend against Airstrikes / rockets / missiles [Brahmos] or an IED?

The thing as it stands is that GOI has no option BUT for a counter strike ... not after the Uri retaliation and its public proclamation. They can't wish it away with casualty higher than Uri NOT that Modi would do that. It is only a question of time and timing.

They only question is if the retaliation will be against the expendable footsoldiers or against the proper jihadi army?
Top

Who needs external enemies when you have people like this within the country. 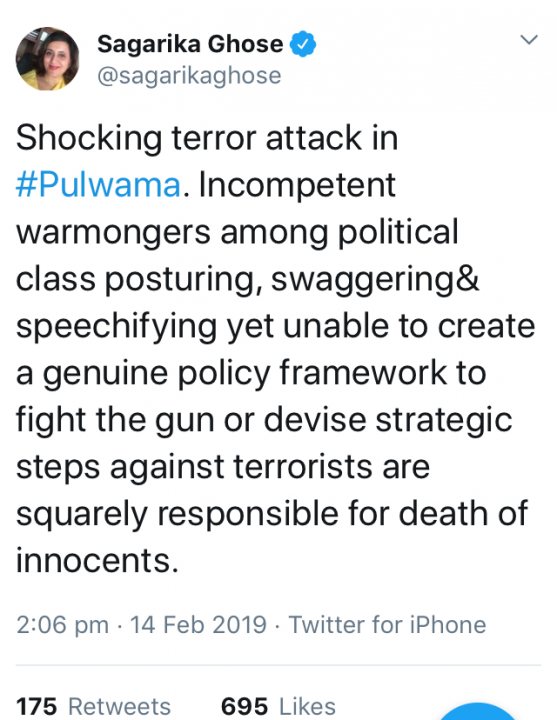 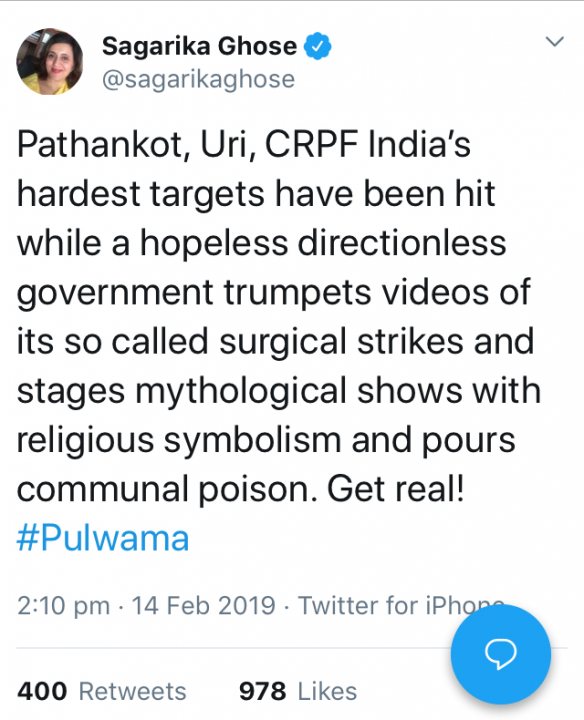 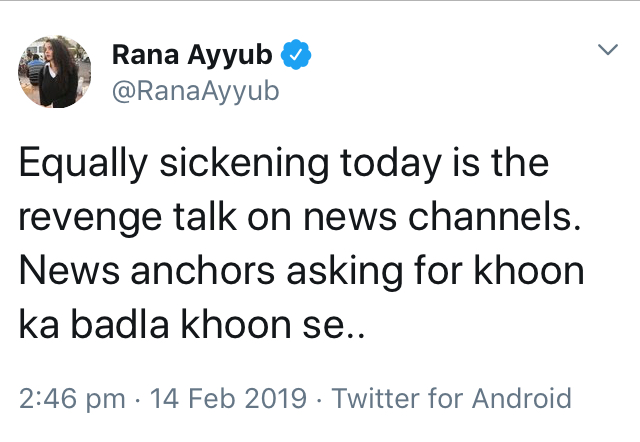 please stop posting the tweets of mad people on this thread.

twitter is like a public unpaid toilet - everyone can crap in there and no need to give them a global audience or worry about their rants.

nobody cares about this inbred set of people who retweet each other in their echo chamber.
Top

Every tweet of their only ends up exposing them. Let them be.
Top

With full majority right wing govt, Modi as PM and Doval as NSA just before elections. This is the strongest team and best timing India could possibly come up with to give us that first resounding response to pakistaniyat that Rakshaks have craved for decades. If nothing happens, i’ll loose faith...... and in true Orwellian ending, learn to love Rahul baba and Congress.
Top

First of all, Pakistan didn't became our enemy just now that we have to eliminate them asap. They were same folks yesterday and they are same now too.

Who were pakis yesterday? If we really want to take action against them, then target all pakis both outside and inside India. Target those JNU traitors who enabled these attacks in first place. Target those politicians who love these terrorists. Target every anti-national.

That said, there should be serial bomb-blasts in pak-punjab. Nothing linked to GoI on paper of course. There should be blood on Paki streets. If the guy want to fight in shadows, we should grant him his wish.
Top

Cool response is needed not blackmail. Time for shadow boxing is over. One hopes the establishment has plans A, B and C for such contingencies if not a long term goal. If they have it time to implement it.
Top

The NSA has once hinted that if Pakis do another Mumbai, they will lose Balochistan.

I think they should lose more than just Balochistan
Top

@syam, I share same feelings. But at large we people of India are responsible as we give space for political party's shamelessness. We, people of India have grown thick skin like politicians. Sometimes I doubt if it is people of India who fought against British or they were same few like our army men.
Top

With publicly proclaiming the surgical strike after 18 deaths @ Uri this GOI in effect drew a red-line. For that red-line to have any meaning GOI has no option but to retaliate now with the death toll past 44.

I don't think GOI will go for something as big as Balochistan or Sindh because that means pushing bakistan for an all out war. GOI will try to inflict as much as we have suffered plus some interest may be 2x.

We just have to wait for the wheels to turn.
Top

Incidentally, an attack inside Iran too during this period. 20 hrs old news.

The suicide bomber struck a bus transporting IRGC members on the road between the cities of Zahedan and Khash in Sistan-Baluchistan Province, the IRGC said in a statement carried by state media.

It could be alteration of LAC as they would have moved the jihadis deeper after surgical strike.
Top

Gen VK Singh : "every drop of our soldiers' blood will be avenged".
Top

I would think there would be many targets, expendable as well as suited-booted jihadis, within range of a Brahmos barrage.
Top

Surely a lot of libs are gloating surreptitiously or in this case openly after today's tragedy. Won't post this sick tweet...

Seems like this lady is tweeting from DU canteen according to some of the replies. What a sick lady...
Top

Much as I hate to say it, this will hit the govt's image, as far as its `tough on national security' or Kashmir policy are concerned.
The surgical strikes should have been part of a larger policy to squeeze Pakistan. That has not happened. I don't really a pakistan policy, let alone one different from the preceding Govt. Why is it that:
- Pakistan is still given most favored nation, though they don't extend that to us.
- We don't get the 20% of water we are entitled to under IWT, much less do anything to restrict Pakistan's share.
- Medical visa policy rescinded by SS.
- No policy to ban companies or individuals that have links to the Pak army (or Fauji foundation).
- To the best of my knowledge, no disproportionate retaliation for cross border firing.
Top

GoI shouldn't hesitate to use areal attacks. If it escalates into a full scale war, so be it. Also, it's high time that IWT is abrogated.
Top

Paki will get what they full deserve in next 3-4 weeks. Expect the unexpected.
Top

The solah is tied to pakis psych as a nation. Send 5-6 rambas and baaz with intent to knock a few solahs down inside their territory. If that causes a conflict then as said above it is fine. Otherwise a bhramos barrage never to be forgotten.
Top

As usual, when Pakistanis sense a 'strategic opening' they move. Its important to note that the 'strategic opening' does not have to be real, it may exist only in the Pakis mullah addled brain, but if he senses it, he will move. The strategic opening in this case was:
1. The US surrender in Afghanistan.
2. The bribes paid to Pak via UAE, SA & possibly world bank to ensure a few months of stability as the US washes its hands off of Afghanistan.

If India is to deter a further escalation of violence and leakage of that violence into heartland India, we need to dramatically over react, both kinetically and politically. Any offers of talks, peace etc. will only embolden the Pakis.


Any culling of cannon fodder on the LOC or the IB does not matter, because the mullah is always happy to sacrifice someone else's son in Jihad.

1. Hit the elite (civil, military and bureaucrats) in Pakistan who run the Jihad factory.
2. Give some sort of finality to the Kashmir issue. 370/35A that were once concessions to an untrusting local populace have become causal factors for instability because it gives a patina of truthfulness to the Paki claim that Kashmir is a dispute. Kashmir is just like any other state, now that the blood of so many Indian patriots is mixed in that soil.
3. India should start working on a war footing to develop a capability to hurt Pak using water. Withdrawing from the IWT while we dont have a capability to actually restrict the water does not achieve much, except give an occasion to meddlesome parties to interfere.
4. Hold hearings on imposing Sanctions on Huawei and ZTE. These companies are intimately connected to the PLA, and it is the PLA that is shielding the Pakis in the UN with their veto.
5. Demand that twitter, reddit, youtube, facebook ... silicon valley companies do more to restraint the jihad mania.

I have a lingering suspicion that the west has decided to use the Uighurs & the Huis against China and Pak is willing to be the condom, for the right price, as usual.
Top
Locked
2283 posts