The Military Issues & History Forum is a venue to discuss issues relating to the military aspects of the Indian Armed Forces, whether the past, present or future. We request members to kindly stay within the mandate of this forum and keep their exchanges of views, on a civilised level, however vehemently any disagreement may be felt. All feedback regarding forum usage may be sent to the moderators using the Feedback Form or by clicking the Report Post Icon in any objectionable post for proper action. Please note that the views expressed by the Members and Moderators on these discussion boards are that of the individuals only and do not reflect the official policy or view of the Bharat-Rakshak.com Website. Copyright Violation is strictly prohibited and may result in revocation of your posting rights - please read the FAQ for full details. Users must also abide by the Forum Guidelines at all times.
Post Reply
3678 posts

what is hindi word for porcupine ?
Top

I hope they keep the black colour for the composite casings and not paint it dull grey, looks way cooler...and literally black ops .... looks like maws/rwr? under each wing and one on the big underfin below the tail...

what is that black rectangular panel on the side for?

good job by Embraer on making all the mods ... I knew they would deliver..good set of chaps.
Top 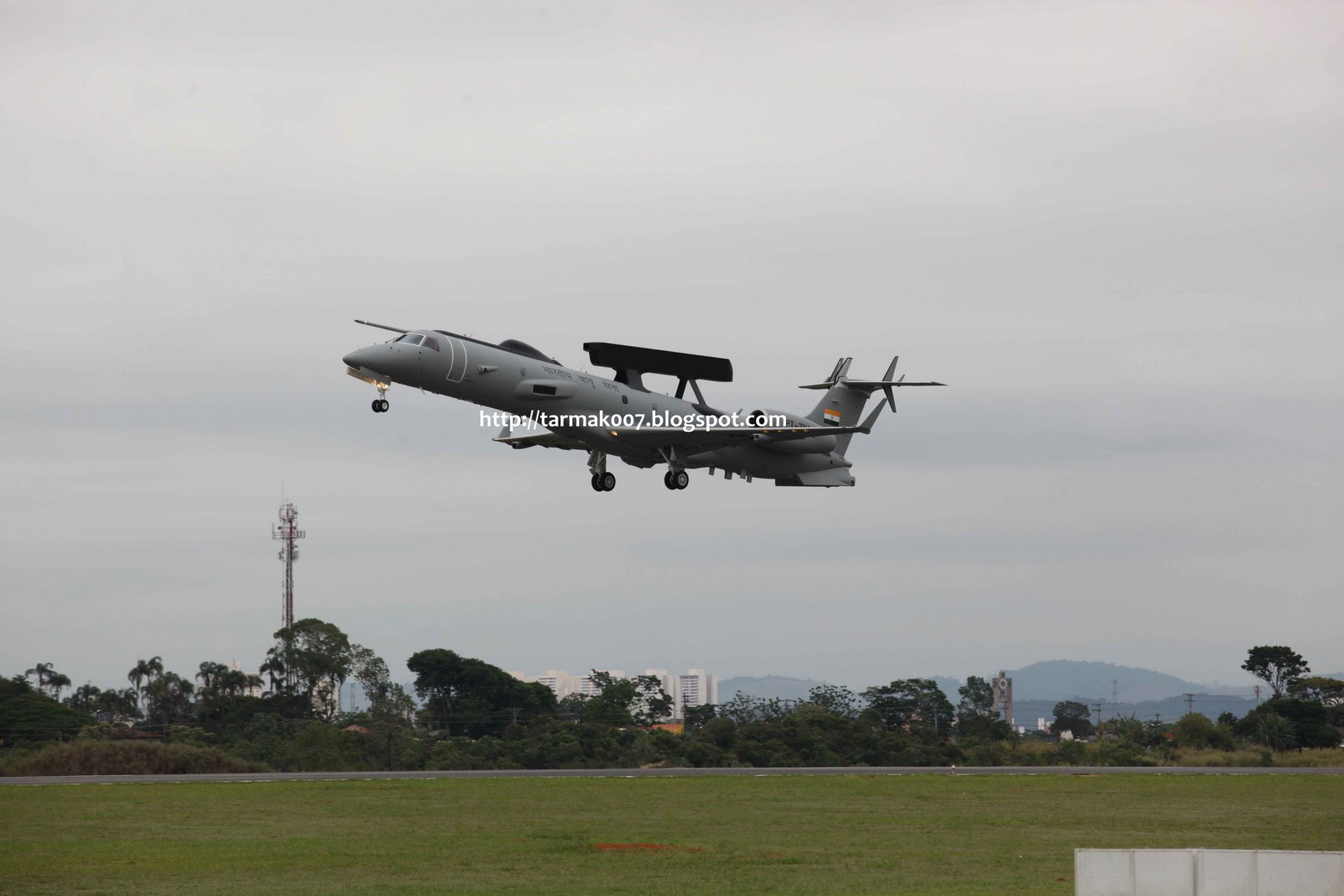 Wow.....Kodus to DRDO and Embraer.

similar looking placement of the maws/rwr under wings and on underfins below tail, the extra tall antenna on tail, the side looking "box" thing on main fuselage...
Top

^ yes bmallick, it would be carrying ballast weight to simulate the mission payload during flight envelope testing now. mission eqpt will be integrated in India only - could take 2-3 yrs to install and test all that here...esp if something is not yet tested on CABS older a/c like the main radar for instance.
Top

How sweet ... some kind of a distraction for jingoes waiting for desi maal like Tejas LSP7/NP1
Top

I am in love.
Top

Wow look at the tail plane.

Congrats to DRDO for the awesome achievement

I am looking at the picture like for the last 10 minutes. I don't know why.

suryag wrote:It would have been more fun had the picture been blurred and taken from behind shrubs

the ereyie does not have it.

looks like its not a side looking array or a SAR but some kind of DF eqpt...perhaps a 2ndary ELINT function to locate hostile emitters for jamming or pass on co-ordinates to ARM shooters.
Top

Was DRDO involved in suggesting the mods to the airframe or was it done by Embraer themselves on the requirements given to them?
Top

some details on the side bulge's ESM function from a similar system:

USAF and NATO E-3s are being fitted with the AN/AYR-1 passive sensor system, which can locate fighter radars 550 km away. This takes the form of a 3.96m canoe-shaped bulge on each side of the aircraft's forward fuselage, supplemented by pairs of smaller bulges on the nose and tail. The first NATO aircraft fitted with this equipment, LX-N90442, returned to Geilenkirchen in October 1991.

In October 1995 the first USAF aircraft was fitted with the AYR-1 as part of the Block 30/35 upgrade. The remaining aircraft are being retrofitted at Oklahoma City ALC by 2001. Aircraft weight is increased by 862kg. French E-3Fs will also receive the equipment.

The RAF's E-3Ds were specified with Loral Yellowgate ESM which performs a similar function. The sensors for this system are housed in wingtip pods. In April 1999 Racal-Thorn Defence was awarded a contract worth about £5m to upgrade Yellowgate. These improvements will enhance the aircrew's threat warning and surveillance data, as well as reducing the system's weight and increasing its reliability.

--
The Boeing Defense, Space and Security AN/AYR-1 is designed passively to intercept, identify and analyse radar and communications band transmissions. As fitted to the E-3, the AYR-1 utilises nose, beam and rear-facing antennas and is noted as adding some 855 kg to the weight of the Sentry mission suite. Jane's sources suggest that AN/AYR-1 is based on the one time Boeing subsidiary ARGOSystems' AR-1080 precision ES equipment. Here, AR-1080 is described as having incorporated fast-tuning synthesisers and multiple baseline interferometer technology. For its part, AYR-1 is claimed to offer direction-finding accuracies measured in "tenths of a degree" and is installed aboard French E-3F, NATO E-3A and USAF E-3B/C aircraft. Production of the system was launched at Boeing's Corinth, Texas facility during 1995 with a Lot 1 production contract covering the supply of 24 systems for installation aboard US Air Force and NATO E-3 aircraft. As of 2007, Jane's sources were suggesting that the United States Air Force's E-3G upgrade programme would include an AN/AYR-1 ES system update. Here, potential improvements were said to include a radio frequency front-end redesign (to remove local oscillator leakage, increase producability/maintainability and improve resistance to co-site interference), the introduction of a multiple platform geolocation capability and enhanced specific emitter identification/sidelobe detection.
Top

The DRDO reaction has come in ...

Singha wrote:MKI or any fighter radar is not the ideal for side sweeping large swathes of territory and keeping it under observation because it would need to point its nose. the side looking radar of proper platforms like E8 and Sentinel are what generates huge sweep areas and allows a racetrack path to keep it under constant watch. so using MKI is a non-starter,

Whats funnier is that this was a real project (based on the sea-flanker trainer instead of the fulcrum), but the exact same configuration, viz Su-28. If FSU hadn't imploded we would have likely seen sea flanker based AAR, LRMP/ASW, AEW, Recon and EW variants in addition to a2a, maritime strike and bomber versions on the Ulyanovsk and follow-ons.
Top

^^^ The picture in the Embraer site is of high-Res and is a beauty... hope we do another dozen of these after the initial 3. We need a good # of these birds before we move on to larger airframes...
Top

need to order a few more!

This is great news..missed it. No wonder Unca Singh did not want to bail out Kingfisher..time to pick up a few Embraers on the cheap in closing down sale..
Top

She's a beauty. Thank you, Embraer and CABS.
Top

suryag wrote:It would have been more fun had the picture been blurred and taken from behind shrubs

cabs ,drdo and embraer should be given the degree of MASTERS IN AESTHETICS. what a bird?

but it is to be seen how it performs in tests when the indigenous systems are integrated. many a times drdo delivers the goodies only to be rejected by armed forces. trishul missile failed, arjun mk1 wasn't giving satisfactory performances then the inordinate delays in tejas programme. after so many hardships i got an inkling that this time around drdo/ cabs guys might succeed in winning accolades from iaf.but still miles to go in indigenous AEW programme. this bird will just have a 240 degree coverage. in future drdo should build an aew with 360 degree coverage. anyways this is a big achievement. i hope other ambitious ventures like lca mk2,astra,maitri,nirbhay ,arjun mk2, amca, etc succeed, so that the armed forces get the weapons they require from our own 'military industrial complex', which is yet to be developed to its full strength.
Top

would they be sending a tanker from here to test the inflight refueling system?
Last edited by vasu_ray on 08 Dec 2011 01:05, edited 2 times in total.
Top

wish to see a day, when we will be activley marketing this bad boy for export markets.

It has TREMENDOUS export potential with most of the airforces in and around asia still lacking such equipment.
Top

To all those that matter: I hope the EMB-145's come with Reverse Thrust. Please don't stinge on it, as you've got the option of with or without from Embraer.
On wet surface runways, with a little bit of gust, getting this airplane to a dead stop can be a pretty big challenge, especially if it's heavy. I speak from my personal experience, having worked with this airplane. If RWY length is above 8,000ft, then you have your margins or else, it's a different story. On the ramp, if SDRE and about 5.6 to 5.9 in ht., take a lot of caution walking across or under the wing. The wing strakes can get you a pretty bad gash that will require stitches. If you're taller, you'll tend to get hurt on the shoulder area, if you walk into it.
And from an operational perspective, if it's operated in a hot environment and gets into a colder region like up North, there can be glitches in the relay between the engine and instruments on the flt. deck. Nothing major but it'll still take 4 hours to rectify it and get it back on-line. Other than that, it's a great platform.
one last bit, if you're using the lav cart and doing a flush out of the tank..got to be taking caution on the hose and make sure it's fit snug into the grooves or else the whole ramp area would get sprayed/messed up!!
Top

saptarishi wrote:cabs ,drdo and embraer should be given the degree of MASTERS IN AESTHETICS. what a bird?

but it is to be seen how it performs in tests when the indigenous systems are integrated. many a times drdo delivers the goodies only to be rejected by armed forces. trishul missile failed, arjun mk1 wasn't giving satisfactory performances then the inordinate delays in tejas programme. after so many hardships i got an inkling that this time around drdo/ cabs guys might succeed in winning accolades from iaf.but still miles to go in indigenous AEW programme. this bird will just have a 240 degree coverage. in future drdo should build an aew with 360 degree coverage. anyways this is a big achievement. i hope other ambitious ventures like lca mk2,astra,maitri,nirbhay ,arjun mk2, amca, etc succeed, so that the armed forces get the weapons they require from our own 'military industrial complex', which is yet to be developed to its full strength.

One question. If it is already painted in IAF colors, why does it have our flag on its tail instead of the IAF's usual fin flash or roundels?
Top

It is not a full IAF bird yet - it still has a Brazilian civilian registry number (PT-ZNA) - so no roundels or fin flash. (My best guess.)
Top

Antonio from Brazil has the video of the flight!

This aircraft is a real beauty!

huh looks like this was not the first flight. At 2:20 an unpainted aircraft lands. So, they must have already done some flight testing and decided to reveal the flying ac only after initial flight tests were passed.

Or are there two prototypes. But both seem to have PT-ZNA as the tail number (not clear on the unpainted ac though).
Top

See it again- its an Indian flag, not the IAF fin flash and no IAF roundel either.