All threads that are locked or marked for deletion will be moved to this forum. The topics will be cleared from this archive on the 1st and 16th of each month.
Post Reply
6594 posts

Chinese man charged with hacking into US fighter jet plans

US authorities have charged a Chinese businessman with hacking into the computer systems of companies with large defence contracts, including Boeing, to steal data on military projects including some of the latest fighter jets, according to officials.

Su Bin worked with two unnamed Chinese hackers to get the data between 2009 and 2013, then attempted to sell some of the information to state-owned Chinese companies, prosecutors said.

The three hackers targeted fighter jets such as the F-22 and the F-35 as well as Boeing's C-17 military cargo aircraft programme, according to a criminal complaint filed in US district court in Los Angeles that was unsealed on Thursday. An attorney for Su could not be reached for comment.

Su was arrested in Canada on 28 June and remained in custody there, said FBI spokeswoman Laura Eimiller in Los Angeles. A bail hearing was set for 18 July.

US justice department spokesman Marc Raimondi said the conspirators were alleged to have accessed the computer networks of US defence contractors without authorisation and stolen data related to military aircraft and weapons systems.

"We remain deeply concerned about cyber-enabled theft of sensitive information and we have repeatedly made it clear that the United States will continue using all the tools our government possesses to strengthen cyber security and confront cybercrime," Raimondi said.

Boeing said in a statement that the company co-operated with investigators and would continue to do so to hold accountable "individuals who perpetrate economic espionage or trade secret theft against US companies".

"We appreciate that the government brought its concerns about a potential compromise of our protected computer systems to our attention," the company said in a statement.

Accusations of hacking by China and counterclaims of such activity by the US government have strained US-Chinese relations. Chinese hacking has been a major theme of US-China discussions over the past week in Beijing, though both sides have publicly steered clear of the controversy.

It was reported on Wednesday that Chinese hackers broke into the computer networks of the Office of Personnel Management earlier in 2014 with the intention of accessing the files of tens of thousands of federal employees who had applied for top-secret security clearances. Senior US officials say the hackers gained access to some of the agency's databases in March before the threat was detected and blocked.

White House spokesman Josh Earnest said on Thursday that both the federal personnel office and homeland security took steps to mitigate any risk as soon as they learned about the possible intrusion.

The face-off ended after both sides indulged in banner drills reminding the other about transgression into each other's territory.

South block officials said the face-off occurred at Charding Nilu Nullah Junction or CNNJ in Demchok sector when two vehicles were noticed crossing the LAC at 5:10 am. The vehicles were intercepted by the Indian Army troopers and both parties were face-to-face for the next 20 minutes. Demchok sector has seen a series of transgressions from the Chinese side since 2008 with Beijing claiming that India was in adverse possession of some 150 sq km of Chinese land.

Last Saturday, PLA troopers on 11 horses were spotted crossing the LAC at point 30 R in the nearby Chumar sector at 11:50 am. An Indian patrol comprising of 11 Indian Army troopers and nine ITBP personnel rushed to check the transgression. A face-off between the two armies lasted 10 minutes and the PLA troopers went back to their base after the banner drill.

As China claims some 80 sq km of its territory being under adverse possession of India in Chumar sector, PLA troopers transgressed in the vicinity of patrol point 62 on July 11, resulting in a face-off again with Indian troops. "If China is committed to maintain peace on Ladakh borders, time has come for Beijing to agree to exchange maps of its positions with India and on that basis clarify the LAC.

"Last time that Chinese refused to exchange maps of the western sector with India was on July 17, 2002," said a senior south block official.

that mockup has a considerably fat hull relative to size of the sail. so like the oscar it might feature a missiles between the two hulls or a considerable vls arrangement aft of the sail(in case of single hull design, which I expect it is as everyone is going in that way).
Top

China Thinks It Can Defeat America in Battle
Top

vinod wrote:China Thinks It Can Defeat America in Battle

A country which has never won a war has confidence to take one a country with elevan aircraft careers and bases all over the world !! Wow. If I were Chinese general I would be just worried on how many days I can stop us military at the border. Would not like to face railguns or chemical lasers in the sky nor raptors.
Top

^^^I'm afraid it's just useless speculation. The US is China's best customer. Why risk economic ruin? they will prolly just continue their endless china sea bullying. A first strike against Japan or the US will be the end gate for them. I think India is China's third best customer also. No incentive there for a first strike either.
Top

Its not about how the US will invade china and how china will stop/ruin the US military if they do. Its about who has more influence in the Pacific. China wants to become the biggest player in the region (to some extent it already is), while the US and its allies in the region want to retain their influence.
Top

There is another angle to all this.

It happened to India. While the financial China was shaking Modi's hand, the military China played games along the border.

Much like Pakistan, where the civilians have no control over their armed forces, the financial China is in a similar bind.

I am not too sure how true the story is, but it seems like the civilians in China found out about their own 5th Gen plane via the US Def Sec. ?????

China conducted the first test flight of its stealth fighter just hours before U.S. Defense Secretary Robert Gates sat down with President Hu Jintao here to mend frayed relations, undermining the meeting and prompting questions over whether China's civilian leadership is fully in control of the increasingly powerful armed forces

U.S. officials said President Hu appeared not to have heard of the test flight when Mr. Gates asked him about it in their meeting Tuesday, even after pictures and accounts of it had begun appearing online.

Beijing: China is distributing millions of controversial updated maps to its military in the first upgrade in 30 years, reportedly reinforcing its claims over Arunachal Pradesh.

The Lanzhou Military Command, one of seven PLA ground force commands, has updated more than 15 million maps for its troops, it said.

Though the official media here has not published the maps being circulated in its military, it reportedly incorporated China's claims over the disputed borders with India as well as South and East China Seas, which were hotly contested by several of China's neighbours.

Last month, the new map issued by China stirred up strong reactions in India as it incorporated its claims over Arunachal Pradesh, which China claims as Southern Tibet.

India dismissed the new map issued by Chinese authorities saying cartographic depiction did not change the reality that Arunachal Pradesh was part of India.

"The fact that Arunachal Pradesh is integral and inalienable part of India has been conveyed to Chinese authority at several occasions including at the very highest level," External Affairs Ministry spokesman Syed Akbaruddin said on June 28.

The Chinese maps being issued to the military have been prepared using a geocentric coordinate system, which defines locations according to their latitude, longitude and height.

The project took into account the diverse needs of different branches of the armed forces, Wang said.

They also feature data obtained by experts in geomorphology - the scientific study of landforms.

Training sessions are being organised for the troops that received the maps.

Wang Huasheng, head of an air defence brigade at the Lanzhou command, said the maps would enable his soldiers to spend less time planning operations and would help to improve strike accuracy.

Maps and now this. There we all have the truth, there should never be any confusion. That too from a Special Envoy.

NRao wrote:Maps and now this. There we all have the truth, there should never be any confusion. That too from a Special Envoy.

This is an indication that much of Afghanistan will be sacked by the Taliban and much of the Chinese investment will fall in their territory. Resistance to them will be confined to small pockets of the country. This is one way the PA can keep the Chinese in line.
Top

Five months after the first pictures surfaced in February 2014, the Type 055 cruiser testing rig at Wuhan has taken significant steps towards completion. The advantages of a land based test rig allow Chinese naval engineers to make cheaper adjustments and modifications to the electronics, compared to rebuilding an expensive cruiser on sea trials. Once launched, the Type 055 cruiser will be among the world's most powerful surface combatant warships, giving the People's Liberation Army Navy (PLAN) a multipurpose warship useful for both blue water expeditionary warfare and anti-access/area denial missions.

they are building a lot of DDG/FFG sized warships at a speed matching korea or japanese work.
Top

The above test is an ASAT as per the Americans. We have to wait to see the space debris generated.
Top

Trial production of the TA600 amphibious aircraft, intended to be the world’s largest, has started in China and is expected to undertake its maiden flight next year, a company executive said today.

The aircraft, with a maximum takeoff weight of 53.5 tonnes and a maximum range of more than 5,000 km, is larger than a Boeing 737 and could be used for fire-fighting and air-sea rescue, Fu Junxu, general manager of China Aviation Industry General Aircraft Co. Ltd’s Zhuhai branch, said.

The trial production started following completion of the design process. Its maiden flight is expected to happen in late 2015, Fu said.

“After a period of trial flights, the aircraft will be put onto the market,” he said.

Upon completion, it will replace Japan’s Shin Maywa US-2 aircraft as the largest amphibious aircraft in the world.

^^^ From that page, leaked news of a top secret weapon: 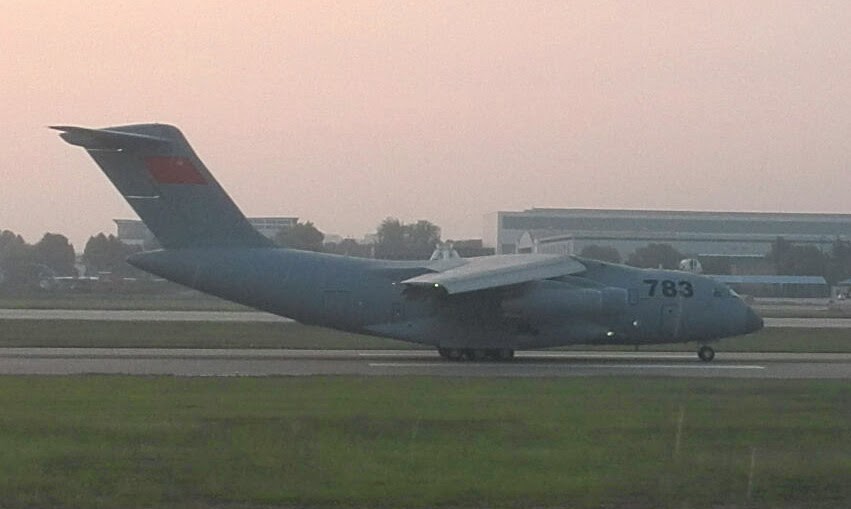 Why is that the last plane displays Quarantine symbol? is it carrying some biohazard?
Top

govardhan wrote:Why is that the last plane displays Quarantine symbol? is it carrying some biohazard?

Rohit ... kind of agree with you.
Although the main landing gear pack and the front seem to be a mongerel between a 76 and a 17.

Would you happen to know which engines are they using on this machine ?
Top

DF-41 TEL Shown here is the all terrain launch vehicle for the DF-41 ICBM, which has 16 articulated wheels. Chinese military vehicles, even those associated with sensitive projects like the DF-41, can be seen on Chinese highways while under transportation.

The DF-41 is one of China's most important new ballistic missiles, whose development has deep ramifications for strategic deterrence. And in an illustration of the challenges of keeping secrets in the Internet age, it recently popped up on a Chinese environmental website.
Top

Its not accidental but more like calculated governmental leak ....you dont move ICBM TEL on road without getting attention of people around.

looks like it even stopped for posing for the photo
Top


Seems they are following the USMC Aggressor Squadrons
Top

please start a new thread with a link to this page in its first post.
Top
Post Reply
6594 posts