A polar orbit would have entailed the same risk with a larger delta-v component and thus consuming more fuel. To put it in polar orbit around Mars, the space craft has to do a perpendicular trajectory run.

What are the current risks for Mangalyaan

1. LAM may not fire
2. LAM will fire but will not stop (will burn up all the fuel)

Mangalyaan going into occultation and loss of communication is just a process. Not a risk. Anyway, ISRO cannot make any last minute changes.

In case of #1, the risk will remain the same whether it is polar or equatorial.

Now why a perpendicular change in trajectory? Come back to rumali roti analogy where the ground you are standing is actually Sun and your body is Earth.

Turn the Solar system and view it perpendicularly. Anything you lob higher will either fall back to Earth or if it escapes Earth will fall back to Sun. In this case Mangalyaan is lobbed so high that it starts falling towards Sun intersecting Mars trajectory and at the same time of Mars being there., except it is falling faster towards Sun in-relation-to Mars. Hence all the probe has to do is slow down just enough that it starts falling towards Mars. There is no change in trajectory. Now for a polar orbit around Mars, the probe has to be either ahead or behind Mars, has to slow down enough to start falling towards Mars and then kick back enough to have its perpendicular velocity put it in an orbital slot.

The fuel required for that change might be say additional 25 Kg. But remember, for a probe, that is almost 2x the payload mass!!

One remarkable thing lot of DDM misses is the precise calculation of fuel, payload and most importantly - navigation and precision engineering of measuring devices to aid it.

It all boils down now if the valves in LAM hold up or not.
Top

Tanaji wrote:Another dumb question : Why is the final MOM orbit elliptical and not circular or polar? Am I correct in guessing that these orbits require more fuel for station keeping and to get into that orbit in the first place? Do these orbits provide any advantage over elliptical orbits?

Of course you are correct in guessing that it will require some more fuel to trim the orbit.

The basic question is, what is the advantage you see of a circular orbit over an elliptical one?

For me, elliptical orbit is ideal. Since it will give more time for the spacecraft to communicate to earth. All the clicky's it takes while it is on the occultation on a daily basis can be sent while it is doing a longer journey on the other axis of the ellipse.
Top

Change to medium gain antenna should be complete but no news.
Top 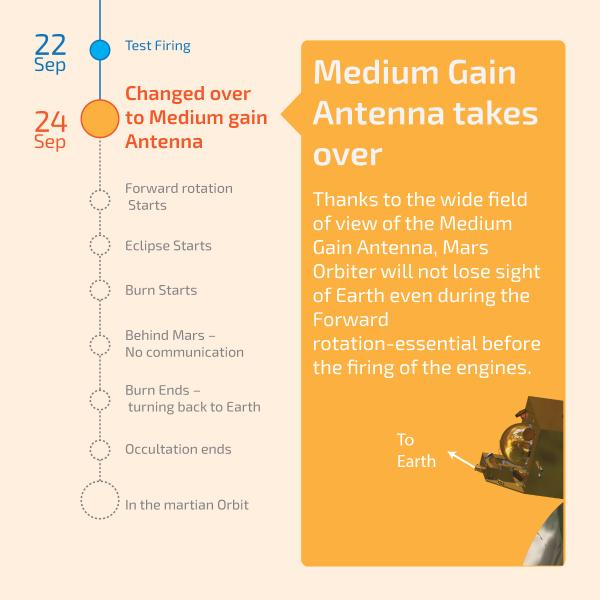 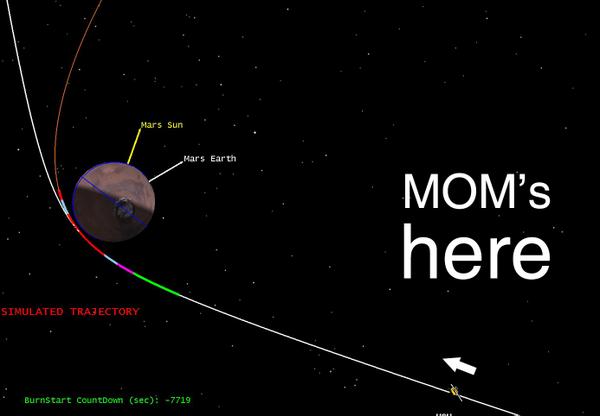 I have noticed that all press releases and communication done by ISRO through MSM and SM (FB and Twitter) address the mission with the acronym MOM (Mars Orbiter Mission) though there is already an original Samskrit name, Mangalyaan. Strangely enough, the space agency has NOT used the term ‘Mangalyaan’ to date, in any of its releases (MSM and SM). Even its press-release on LAM test-firing omitted the same.

Incidentally, MSM (including NDTV and CNN-IBN, which toe a Left-Lib line) have been naming the mission primarily as Mangalyaan (MOM being mentioned occasionally).

It makes one feel that the person who handles the media-communication at ISRO (I would like to believe that the top honchos are not aware of this issue) has ‘difference anxiety’ (Rajiv Malhotra’s term in his seminal work ‘Being Different’) in using the Samskrit term thus toeing the line of Western Universalism.

It may also turn out that in the ensuing name war (unintentional, though it may seem to be) MOM may prevail over Mangalyaan due to the propensity of the primary user, i.e., ISRO, in sticking to the former name. This would have ramifications in documentation, history-books and public-memory. Future missions may be named with equally amusing acronyms (MOM, after all, is the lingo of Western popular culture)

Personally, I have written to a few officials pointing out the anomaly.

It would help if forum members to do the following-

1) Write to whomsoever you think would bring in the change needed.
2) Call out ISRO’s bias in social media; question the admin of ISRO handle on FB and Twitter.
3) Use #Mangalyaan instead of #MOM while blogging on SM.

P.S.- Also, in keeping with Bharatiya traditions, it would be ideal if India goes on to re-name its organizations on the likes of MiDhaNi (Mishra Dhatu Nigam), BhaVi Ni (Bharatiya Nabhikiya Vidyut Nigam) and the like.
Top

Rotation should have started a few minutes ago.
Top

Will know in 12 mins
Top

lol victor you are always 1 step ahead of ISRO,
ISRO @isro · 3m
Forward Rotation must have begun,it is required to align the direction of firing for effective braking. Confirmation reaches after 12.5 mins
Top

brain freeze with the ultra pure hindi on DD, but loving it
Top

Are you related to Prof Pal? He had been a major inspiration for me when I was a kid.
Top

Mangalyaan is only the nickname, if you search for problems like 'difference anxiety', you will find it everywhere. Chill.
Top

Are you related to Prof Pal? He had been a major inspiration for me when I was a kid.

. Keep it simple and cheap, and save the money for a launch

Did the clapping mean the reorientation went fine? Can't follow Hindi
Edit: the voiceover guy should ease up now. Can't hear anything else
Last edited by Comer on 24 Sep 2014 06:31, edited 1 time in total.
Top

Eclipse should have started.
Top 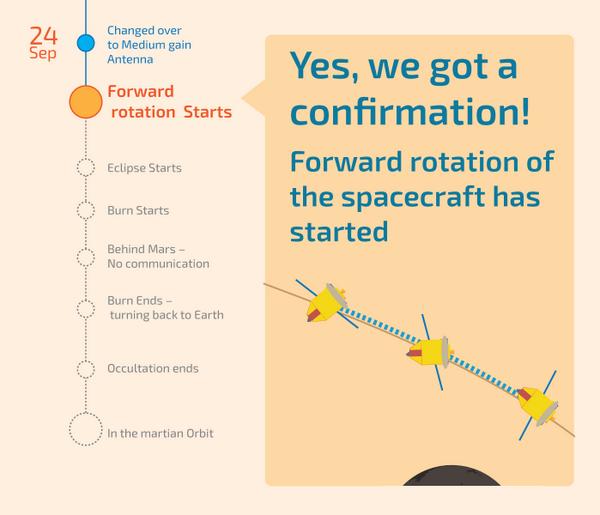 During eclipse MOM will remain in line-of-sight of earth.

MOM will not get sunlight during this period. Will switch to Li Battery and will remain on battery even after out of eclipse till major switch ons are done
Top

disha wrote:Mangalyaan going into occultation and loss of communication is just a process. Not a risk. Anyway, ISRO cannot make any last minute changes. .....Now why a perpendicular change in trajectory?

Not a question of last minute changes.....just initial planning. I am not quite sure why there needs to be a perpendicular kick....MAVEN is in a polar orbit, as far as I know and did not need any perpendicular changes.

Check the approach orbits for Maven and MOM plotted by SSSalvi- they are quite similar.
viewtopic.php?p=1720080#p1720080

I think the difference between a polar orbit and equatorial orbit around Mars for a satellite is merely the approach vector. MAVEN, as I understand it, approached directly over the pole....so, I dont believe there was a need for a perpendicular maneuver (if I understood your explanation correctly).

This animation shows MAVEN captured by Mars (at 20 seconds, you can see the axis of rotation) and the polar approach.
http://www.youtube.com/watch?v=NiVQKyX7YVo
Top 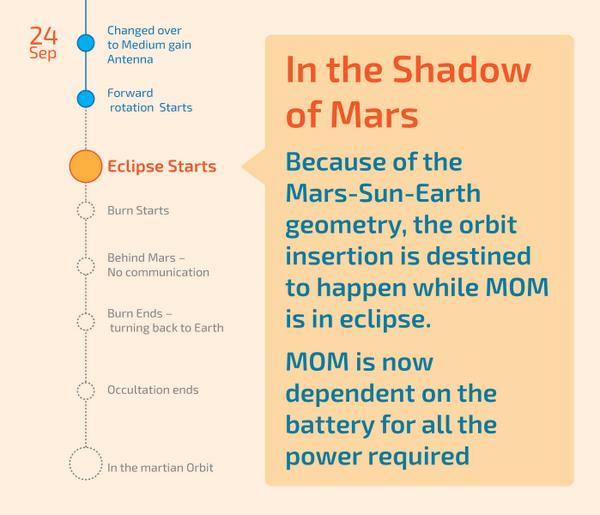 I saw in a monitor I could see some animation of the 8 small thrusters firing. Worried a bit
Top