The Strategic Issues & International Relations Forum is a venue to discuss issues pertaining to India's security environment, her strategic outlook on global affairs and as well as the effect of international relations in the Indian Subcontinent. We request members to kindly stay within the mandate of this forum and keep their exchanges of views, on a civilised level, however vehemently any disagreement may be felt. All feedback regarding forum usage may be sent to the moderators using the Feedback Form or by clicking the Report Post Icon in any objectionable post for proper action. Please note that the views expressed by the Members and Moderators on these discussion boards are that of the individuals only and do not reflect the official policy or view of the Bharat-Rakshak.com Website. Copyright Violation is strictly prohibited and may result in revocation of your posting rights - please read the FAQ for full details. Users must also abide by the Forum Guidelines at all times.
Post Reply
102 posts

In the great Indian Desert - IA 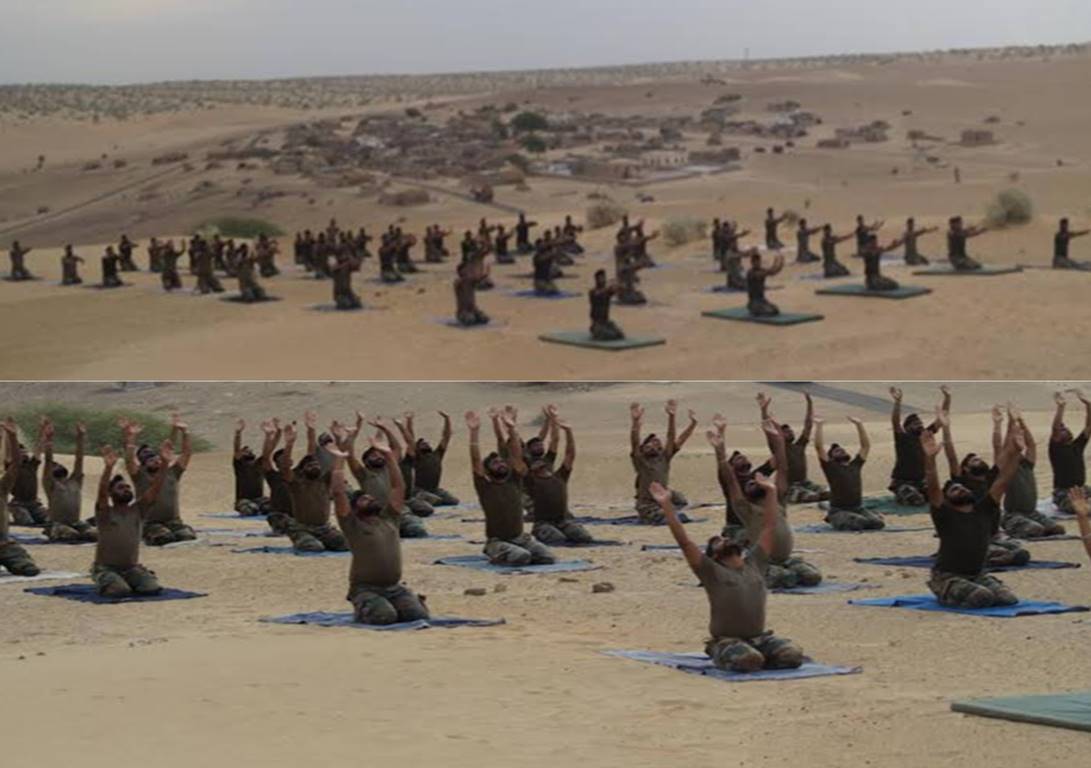 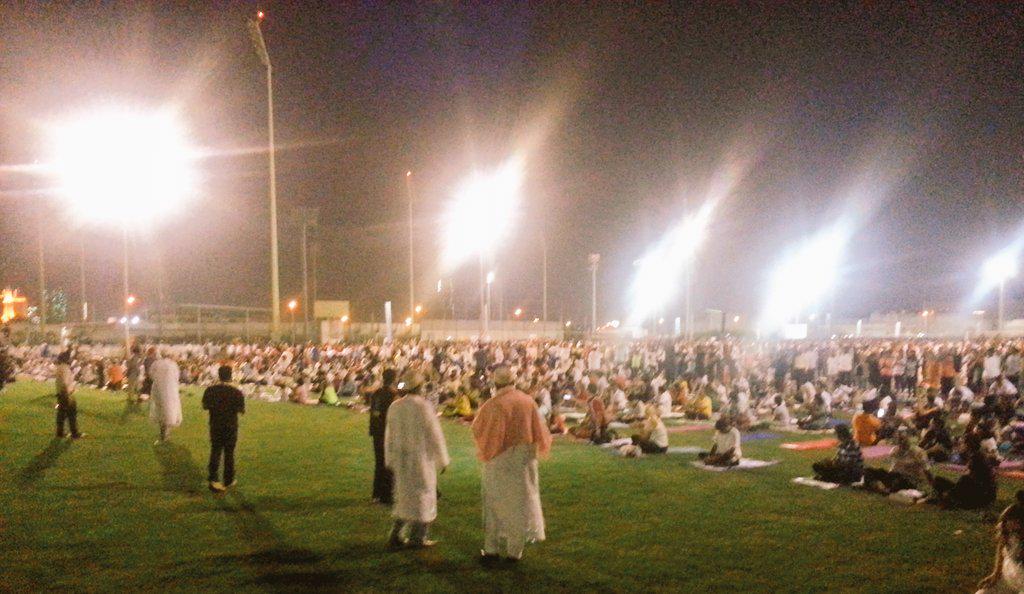 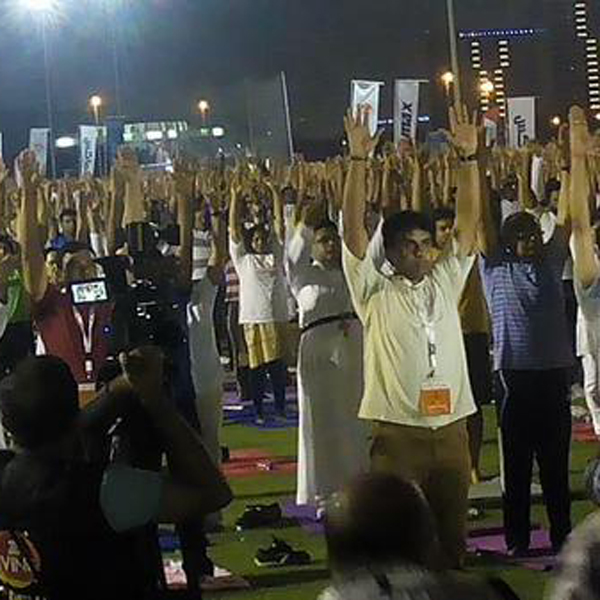 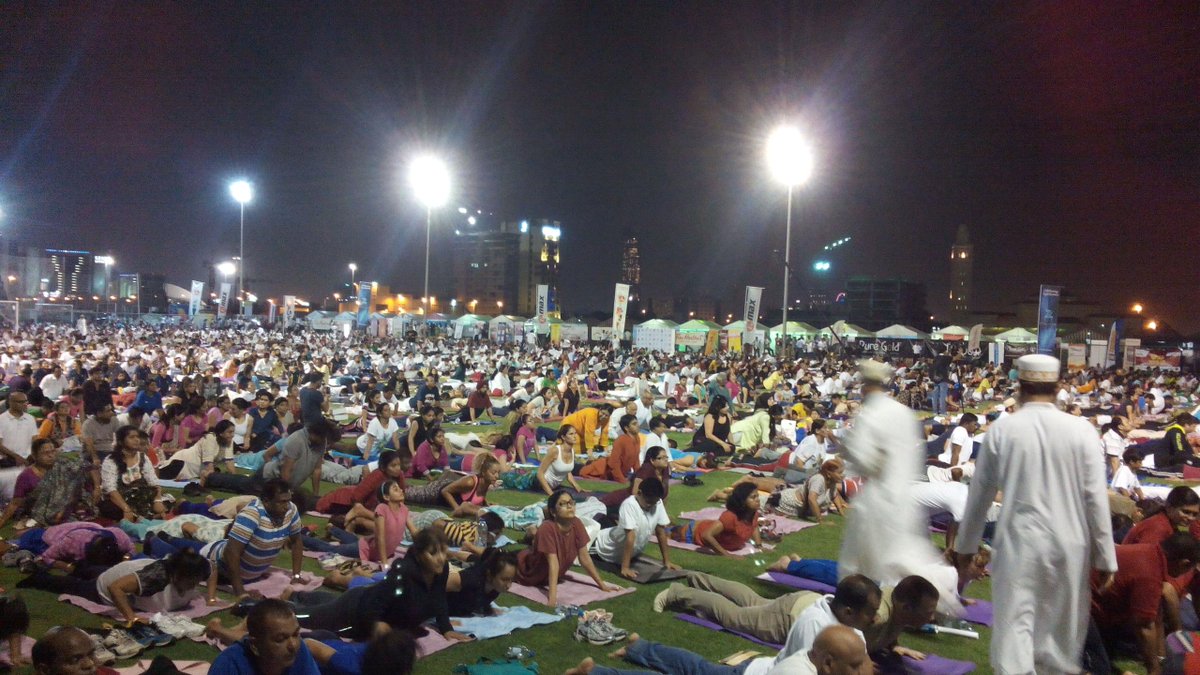 Article before the event 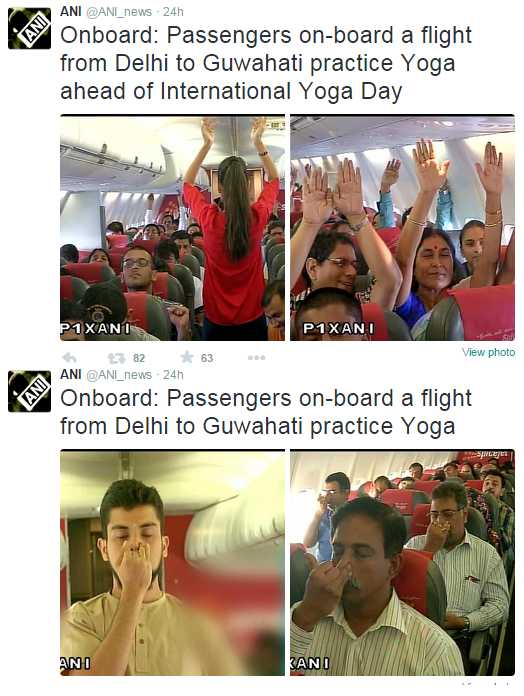 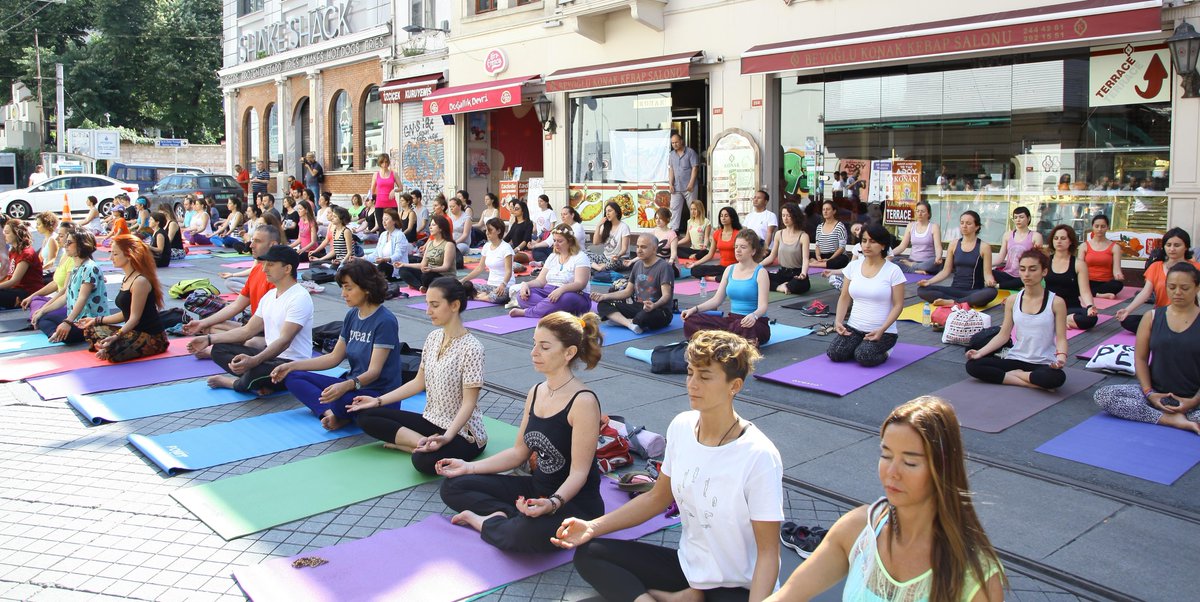 I am amazed how the Indian Govt pulled this off. Amazing.
Yoga practiced in Islamic countries too! I hope we capitalize on it and make it another revenue source.
Top

This is a tight slap on the face of Sikullar forces.
Top

Now when some Congi or AAPtard comes to me glorifying RaGa or Kejri, I tell them that Modi is on a different level altogether, unlike their ghisa-pita netas.

If the Indian public despite seeing all that Modi has achieved in just 1 year still votes for one of these Congi/AAP scum in the next general elections, then they should stop whining and deserve to be looted and scammed.
Top

Indeed, it was beyond surprising to see Day of Yoga celebrated in Saudi Arabia, where non-islamic religion is officially banned. They were surprisingly accommodating and no fuss about it; it must have burned our Pakistani brothers no end to see this.

By the way, a minor nitpick for thread title:per GOI it is 'International Day of Yoga' (not Intl Yoga day).

I love it that PM Modi himself takes the initiative to be the face of these programs, like swach Bharat, IYD etc. Some of my FB buddies (AAP/Cong sympathizers and Hindu) get major khujli and are complaining how Modi is misusing Yoga, and "commoditizing" it. They got smacked upside down by their own friends.

The leftist trash Daily Mall has an article saying NAzi Hitler and his SS were fascinated by Yoga and that they did Yoga in the concentration camp. etc.

The teacher who ran it had disciples in 50 German towns and cities.Himmler, obsessed as he was with hocus-pocus race theories and mysticism relating to his S.S. 'supermen,' carried around a German copy of the Bhagavad Gita with him wherever he went.


He regarded the ancient Sanskrit epic as being a blueprint for cruelty and terror, using it, said Tietke, to ultimately justify the Holocaust.
He wrote; "He identified himself and the SS with the old Indian Kshatriya caste and its publicised attitude of unscrupulous killing for one's 'higher purpose.'"
Tietke says Himmler's attitude to 'karma'
was never better displayed than at the secret speech he made to senior S.S. men at Poznan in 1943 when he spoke of the noble, virtuous work his butchers were performing in eliminating the Jews of Europe and Russia.
Himmler was also interested in other early Indian religious writings of India, including the Rigveda which contains the mythology of the Hindu gods. “These celebrated the racism of the Aryan immigrating from central Asia to India, killing and a driving out designated 'inferior' opponents," said Tietke.

Do you guys see how they are rewriting history and blaming the Hindus for the Holocaust?

We need to oppose this kind of nonsense at every step.

First, lets say it loud and clear. 6 million Jews were sent to the oven and burned to death because Jews would not convert to Christianity.

Unfortunately few popular books or television documentaries on Luther go into detail about Luther's anti-Jewishness, or even mention that he had a hatred for Jews at all. This has resulted in a biased outlook towards Martin Luther and Christianity. This unawareness of Luther's sinister side, while honoring his "righteousness" leads to a ratcheting promotion of Luther which supports a "good" public image while also transporting his Jewish beliefs to those who carry the seeds of anti-Semitism. This will present an unwanted dilemma for many Christians because Luther represents the birth of Protestant Christianity as well as the genesis of the special brand of Jewish hatred that flourished only in Germany.

Although Luther did not invent anti-Jewishness, he promoted it to a level never before seen in Europe. Luther bore the influence of his upbringing and from anti-Jewish theologians such as Lyra, Burgensis, (and John Chrysostom, before them). But Luther's 1543 book, "On the Jews and their lies" took Jewish hatred to a new level when he proposed to set fire to their synagogues and schools, to take away their homes, forbade them to pray or teach, or even to utter God's name. Luther wanted to "be rid of them" and requested that the government and ministers deal with the problem. He requested pastors and preachers to follow his example of issuing warnings against the Jews. He goes so far as to claim that "We are at fault in not slaying them" for avenging the death of Jesus Christ. Hitler's Nazi government in the 1930s and 40s fit Luther's desires to a tee.

This is not YOGA or GITA or RIG VEDA! The German Holocaust happened because of Christianity!

Note: The above newspaper article of Daily Mall is not a recent one as I had implied..someone pointed it out to me that it was from a 2012 article. But still the point about the political left trying to associate Yoga and the Hindus with the Holocaust is unforgivable.
Top

Yoga, a discipline from India that is so ancient in its roots that you can credit it only to unknown truth-seekers from some glorious past era, has an outer form that has seized our collective imagination: For 30 minutes every day, disconnect from the world, take your body through an array of yoga poses, breathe deeply, keep the mind focused, and presto! You will emerge relaxed, rejuvenated, and ready again to re-engage with the relentless pace of life.

By all accounts, yoga is one of modern civilization's great movements. In the U.S. alone, more than 20 million people today are pursuing yoga--one of every 10 adults. This yoga revival is in direct response to an increased hunger for physical and mental well-being, and a growing suspicion that there's more to the pursuit of happiness than the material accoutrements of modern civilization. A panoply of yoga instructors have arrived to offer their own twists to ancient poses. Western inventiveness has flourished in the bountiful soil of yoga; today, some instructors are even offering doga--yoga for your dog.

Yoga's deeper purpose: Inner transformation.
But Jobs was on a quest for something altogether more powerful than stress-reduction, toning, and fitness. He was seeking the kind of inner transformation that many practitioners sense yoga is inviting them to embark on, but don't know where it will take them or how to get there.

For this deeper dive, you can turn to the Yoga Sutras of Patanjali, one of the authoritative and few-surviving ancient texts on yoga. Patanjali teaches that "yoga" means "union"--the dissolving of one's individual self in the larger ocean of consciousness that pervades the universe--and that to help us achieve this union is yoga's real purpose. Now you might think: "What is this 'universal consciousness' that Patanjali is talking about? And how can I ever get there?"

And that may be why Jobs, in his own quest for higher consciousness, turned to Yogananda.

Description
The Bhuvan Yoga mobile app helps in capturing the event by collecting the location (Lon/Lat) which would be automatically recorded, provision to take two photographs and key-in parameters like number of participants, event organizer, name of the instructor and place of event.

Manny wrote:The leftist trash Daily Mall has an article saying NAzi Hitler and his SS were fascinated by Yoga and that they did Yoga in the concentration camp. etc.

Do you have a link to the actual article please?
Top

"Crew of INS Ranvir perform Yoga to keep themselves physically fit & mentally alert. Yoga is a part of our fitness routine onboard and is a way of life" 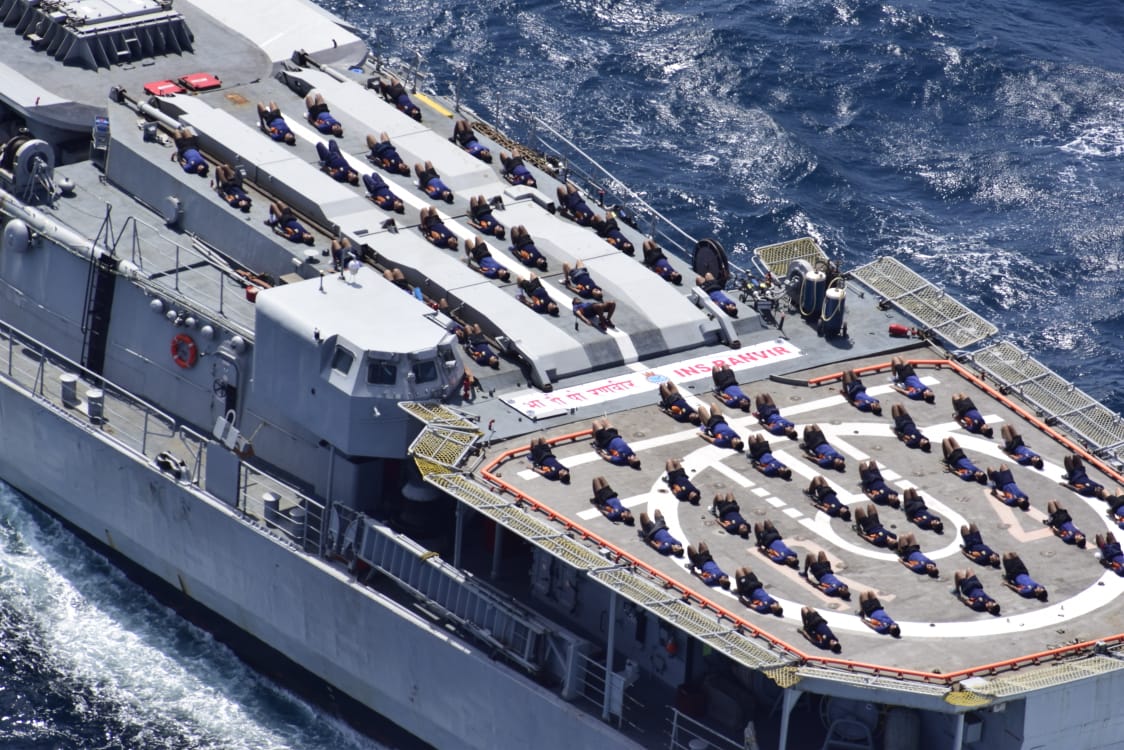 The "Daily Mail" is anything BUT Leftist. It's a UKIP/BNP Brexit-supporting white-supremacist rag.
Top