Shaun wrote:Live wire is the real exercise , this is just for show , so if it is for show then they could have dropped duds and destroy the targets in sync, by some other means. Why i am saying this , well only the retards by jags have found their mark , the rest developed their own. That's precision targeting without SAM threat in a friendly sky !! When R-73 and igla guy missed those para barrels, justification shoot up immediately , real target being much bigger , then why drop those "smiling barrels" !!!
DD team did good work , cause they like those bums never knew whom to target until the last moment.

Edited: "MASK" indicator on FLIR display means laser about to get blocked, hence take action. I think 2 seconds after "MASK" started flashing they cut away from the scene and DD never showed the impact (as usual).

In my opinion there were 2 LGBs which missed their mark. Someone must be getting their behind beaten right now.
Top

Karan M wrote:Why the heck does he cut to the dignitaries whenever the bomb is supposed to land? Did that fellow expect them to jump around screaming in joy? He completely single handedly defeated the purpose of IAF to show deterrence and impact.

That has been their standard practice for a while now. If you watch other DD live telecast, they do the same. Old timers with die hard habits. Wondering how many people filed complaints and it went to deaf ears. They must be expecting VIPs to jump up with joy and do their lungi dance like in the cinema halls when song & dance scene comes up

VIPs whose faces are constantly shown especially those who are sleeping or yawning should have enough sense to tell Doordarshan to concentrate on the show and not on them. Typical sycophancy on the part of DD and decades old acceptance and encouragement of that sycophancy by India's politicians who want their faces seen on TV in their towns. no matter what they do. This actually lowers the standards in a thousand ways.

Each target was about 2-2.5 km away. That means the sound of explosions would be heard 6-8 seconds after the hit. These camera coordinators were unable to hold the camera on target for even that long. They would spend 10-12 seconds showing Rajasthan governor shifting his arse to fart or Pranabda dozing. And while we enjoyed these sights the bombs would hit and the sound heard after 6-8 seconds. Pathetic photography from people whose only qualification is sycophancy. For a country that has world class camera persons and production skills this is an utter shame.
Top

I also see that people are enjoying the high standards of public broadcasting that are reaching higher and higher. On a serious note, thats why the VIP goes there. Otherwise, why sit for thours in open exposed to the mosquitoes and all kinds of elements. If the coverage is any different the cameraman would lose their job. There is probably a political operative watching each angle to keep out the yawns, sneezes, farts. You get to see the "program" when that happens.

On the negative note, not a very impressive event, imho which does not matter in any way shape or form.

edit -- "a big hand of applause for the eggsplosion on your right, ladies and gentlemen..."
Top

Most modern munitions have smokeless & flashless propellant, so noticing will be naturally difficult.

Also, air launched missile use the aircraft's relative velocity, so do not have boosters like ground launch weapons.

Firing AAM on flares is a bad idea. The RF proximity fuse does not get enough interference patterns from the para or flare to trigger the warhead.

For a well publicized event, Chukar, Banshee, Mirach or Lakshya in service could've been used.

We used to launch Chukars from OPVs for the big boys firing their missiles.
Top

tsarkar wrote:Firing AAM on flares is a bad idea. The RF proximity fuse does not get enough interference patterns from the para or flare to trigger the warhead.

Excuse this noob question, but if the above is true for IIR/IR missile, how will flares act as a countermeasure?

Edit: It seems like R-73E can carry radar proximity fuse. My 2nd question still stands. Is the flare purpose is to deflect the missile from its target, but not necessarily trigger its warhead?

Sid that FLIR display is from the UAV not the launcher which had its own Litening. So MASK is from that feed.
Top

^^^
the four side buttons says different story , the screen reflection gives hint of the pilot.
Top 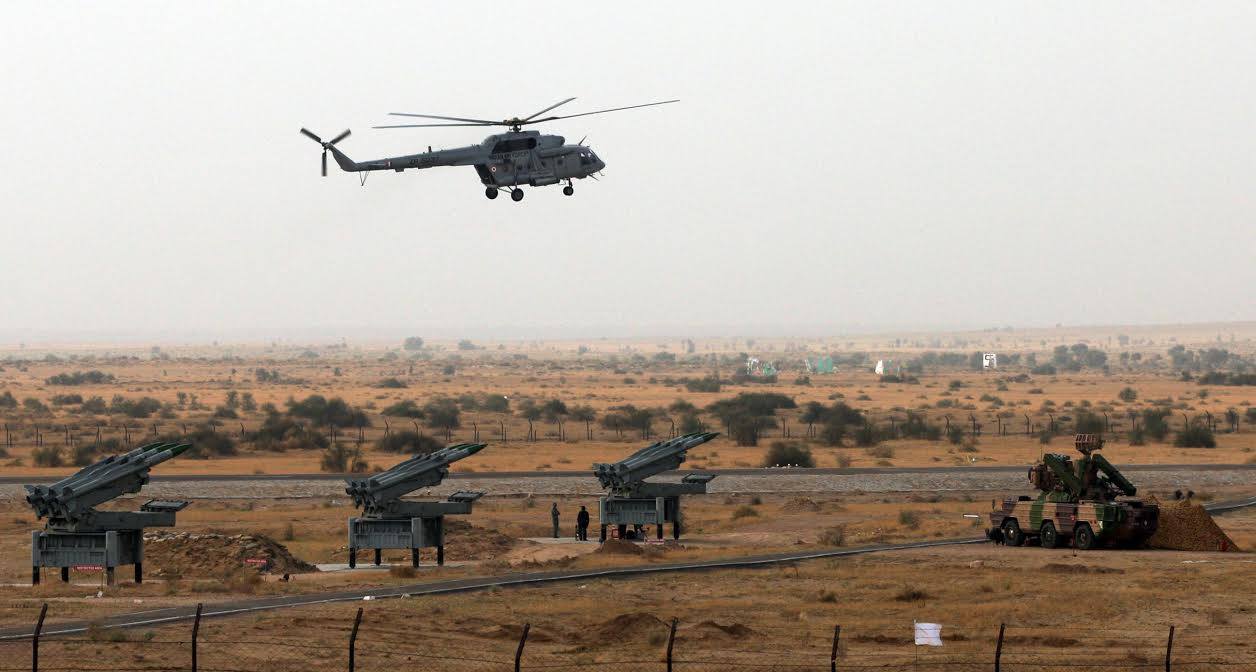 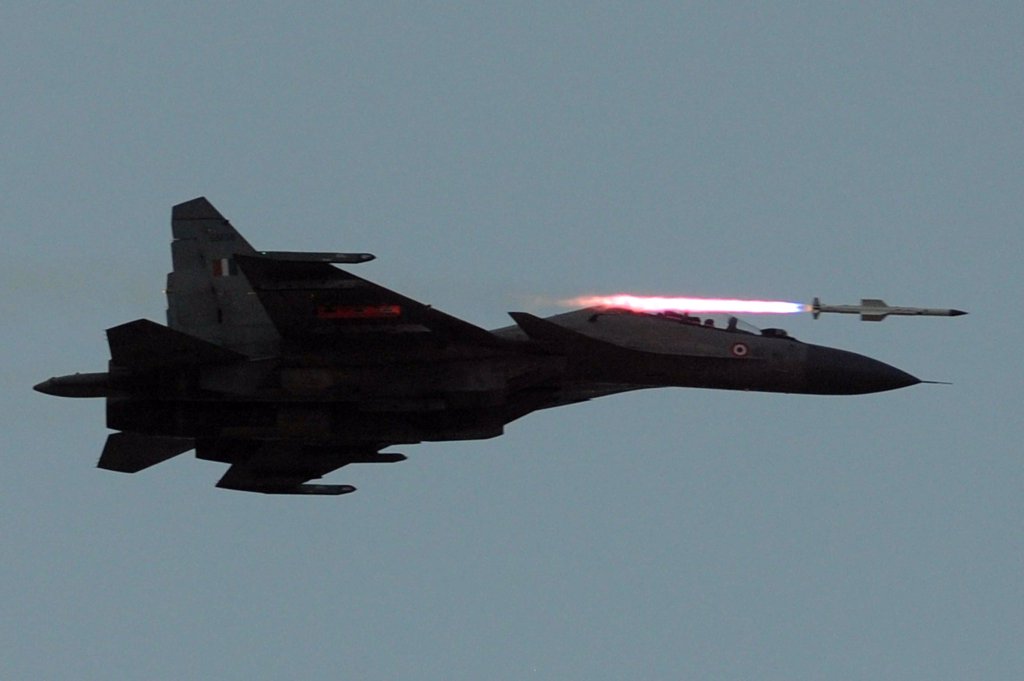 What side buttons and which one has a reflection of the pilot?
It would be really surprising (and cool) if they can get a live feed from the Litening to the ground.
So far that has only been available with RecceLite.
Top

You are correct Shaun, its much more visible in the video:https://www.youtube.com/watch?v=IPNbzqfmpE8

So this confirms a datalink solution on the Tejas! Or they have a way to DL the Litening to the ground!
Top

Karan M wrote:You are correct Shaun, its much more visible in the video:https://www.youtube.com/watch?v=IPNbzqfmpE8

So this confirms a datalink solution on the Tejas! Or they have a way to DL the Litening to the ground! You are right those are images from the cockpit of LCA Tejas but I think they were not live feed but recordings from earlier, if you see the left bottom of the video and screenshots there is date and time. And the time you see is 12:05, even in the HUD part the time is 12:06. Also you can hear a bomb exploding before the cockpit feed ends.

Seems BR had an attendance

. Now where are the pictures?
Top

Nice to see another anime fan, but isn't it Kakarot?
Top

Arun Menon wrote:Nice to see another anime fan, but isn't it Kakarot?

Big fan of Dragon Ball, yes its Kakarot but i didn't want to use the original

Nice.. can you have one of Akash as well/
Top

yes pliz ... need to spread these in my whatsapp groups.

Does anyone have small vids of just these nice firepower demonstrations or a highlights sort of summary?
Top

karan saab , its must be the GoPro kit retained from the previous adventure, but live feed , hmmm that needs a massive bandwidth or it have been recorded before then how "masking" came up.
Top

Karan M wrote:Nice.. can you have one of Akash as well/

Picklu wrote:yes pliz ... need to spread these in my whatsapp groups.

How about that part where the LCA maneuvers and fires its R-73? Along with cockpit Litening images of ground target.
Top

Kakarat wrote:Posted a GIF of LCH firing rockets at Iron Fist 2016 on twitter

Kakarat wrote:GIF of Astra being fired by Su-30MKI at Iron Fist 2016

Could you also show the maneuver prior to launch? Thanks.
Top

So where are the pics?

Kakarat wrote:GIF of Astra being fired by Su-30MKI at Iron Fist 2016

Could you also show the maneuver prior to launch? Thanks.

Since its GIF long period makes it heavier and twitter allows only 5MB.
I have made a GIF of cockpit Litening image but its file size is too high, working on that to make it smaller
Will post shortly
Top

^^ Around 42/43 sec mark, something comes off from the rear of the Astra just before its separation from MKI. Looks like a residue of some sort...perhaps smoke from primary igniter or something like that?
Top

The Astra was fired, but do we know if it hit its mark?
Top
Locked
4457 posts