The Military Issues & History Forum is a venue to discuss issues relating to the military aspects of the Indian Armed Forces, whether the past, present or future. We request members to kindly stay within the mandate of this forum and keep their exchanges of views, on a civilised level, however vehemently any disagreement may be felt. All feedback regarding forum usage may be sent to the moderators using the Feedback Form or by clicking the Report Post Icon in any objectionable post for proper action. Please note that the views expressed by the Members and Moderators on these discussion boards are that of the individuals only and do not reflect the official policy or view of the Bharat-Rakshak.com Website. Copyright Violation is strictly prohibited and may result in revocation of your posting rights - please read the FAQ for full details. Users must also abide by the Forum Guidelines at all times.
Post Reply
4441 posts

DD National is live with launch of PSLV C-47
Top

CARTOSAT 3 and all 13 customer satellites successful injected into desired orbit.

Off the top of my head:

1) Highly agile/steerable antennas. Can image a "location of interest" for longer and from multiple angles
2) Multispectral imaging
3) 0.25 cm images in panchromatic and 1 m resolution in multispectral imagery

Overall, a very sophisticated satellite, the first in its series
Top

There may be a typo .. image resolution could be around 0.25 meters (or 25 cm). May like to edit the statement.

PSLV-C47 standing tall at the launch pad in Sriharikota. Less than 16 hours for launch. 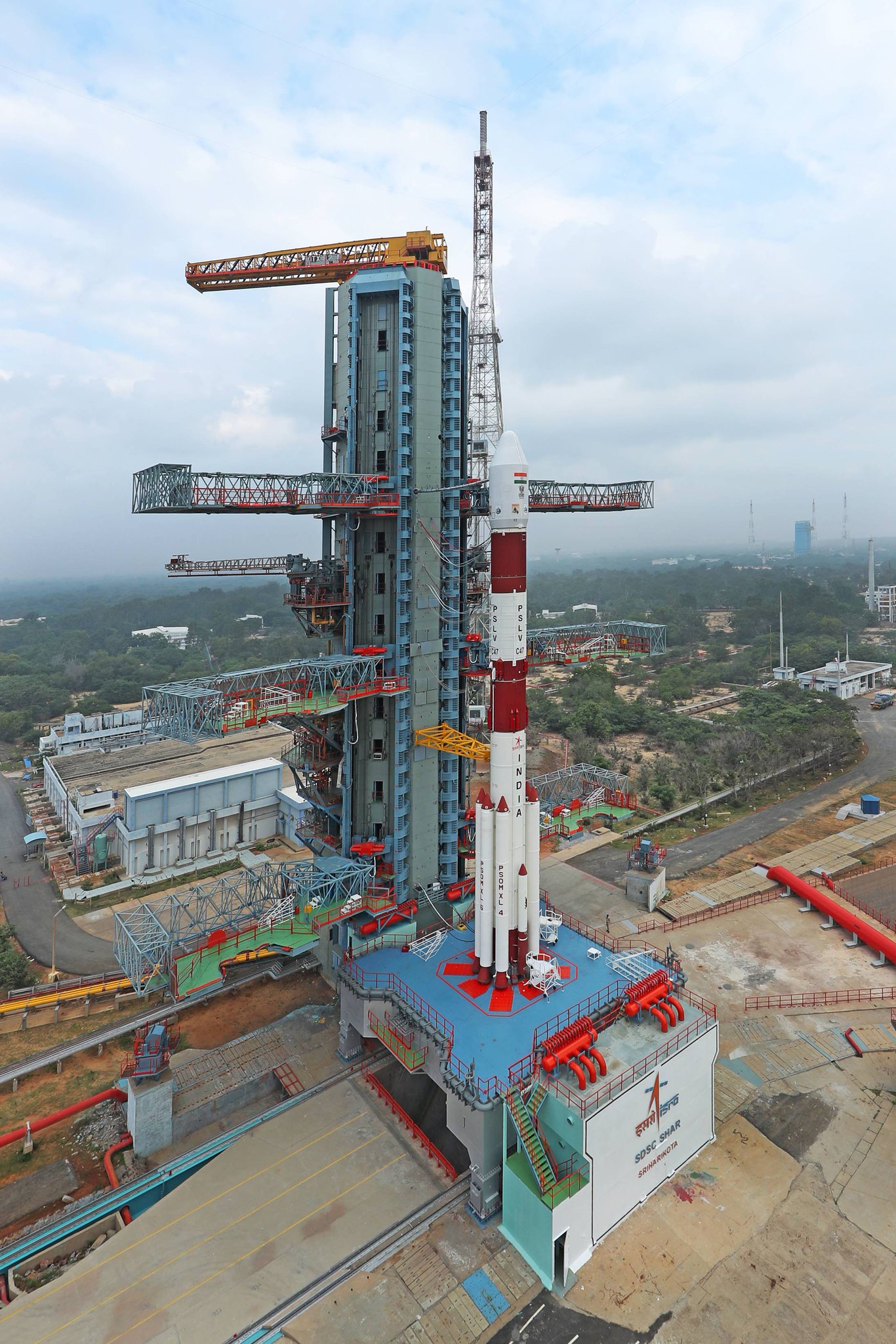 Dint want to miss these( MBD-if-RP)


In photos: The scientists who launched India’s space programme
By Manavi Kapur October 11, 2019 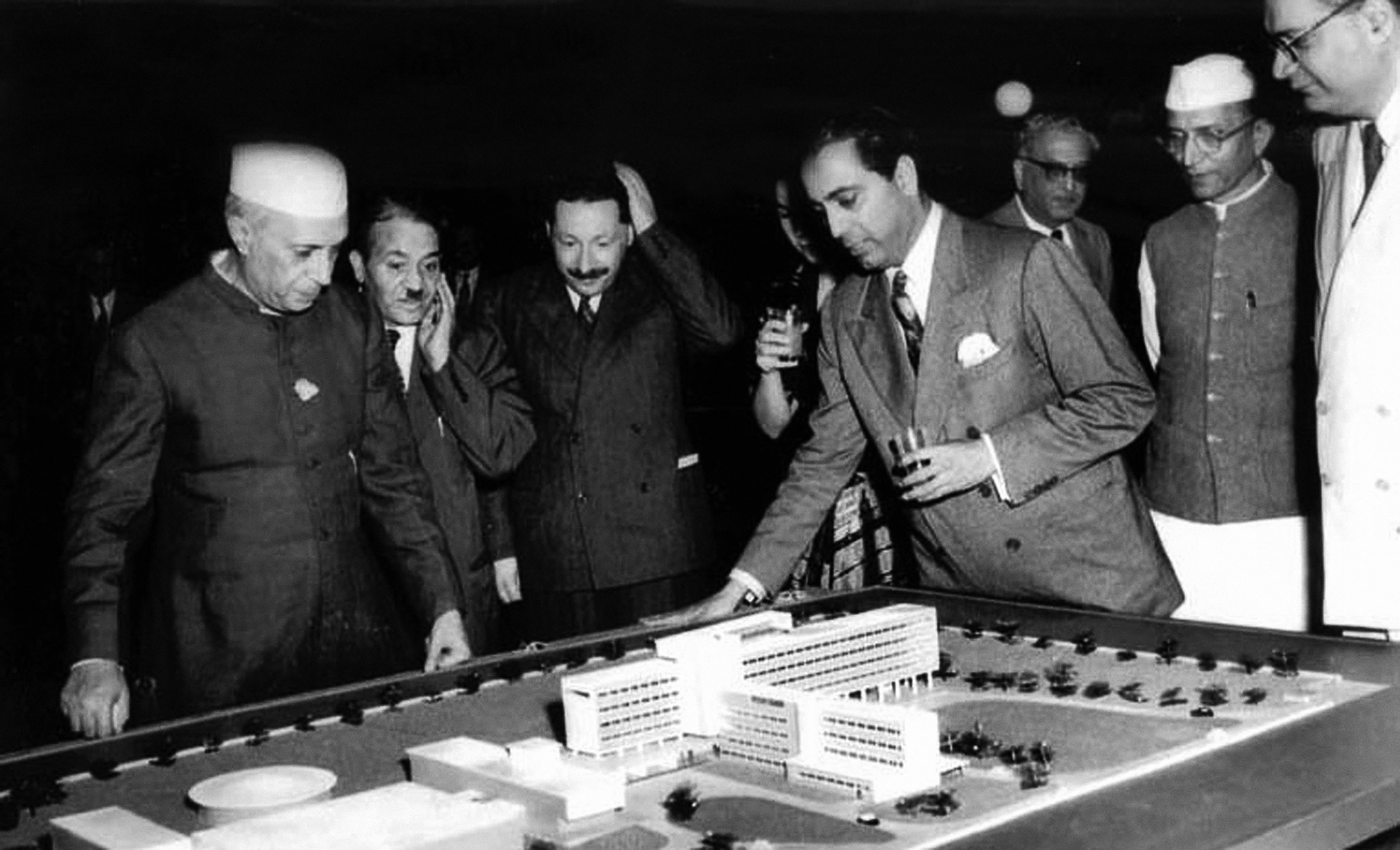 Homi Bhabha (glass in one hand) showing prime minister Jawaharlal Nehru (extreme left) the model of the Tata Institute of Fundamental Research. To Nehru’s left is SS Bhatnagar; to Bhabha’s left is Morarji Desai, who later became the prime minister of India in 1977. Between Bhabha and Desai, in the background, is MC Chagla, the eminent jurist and diplomat. 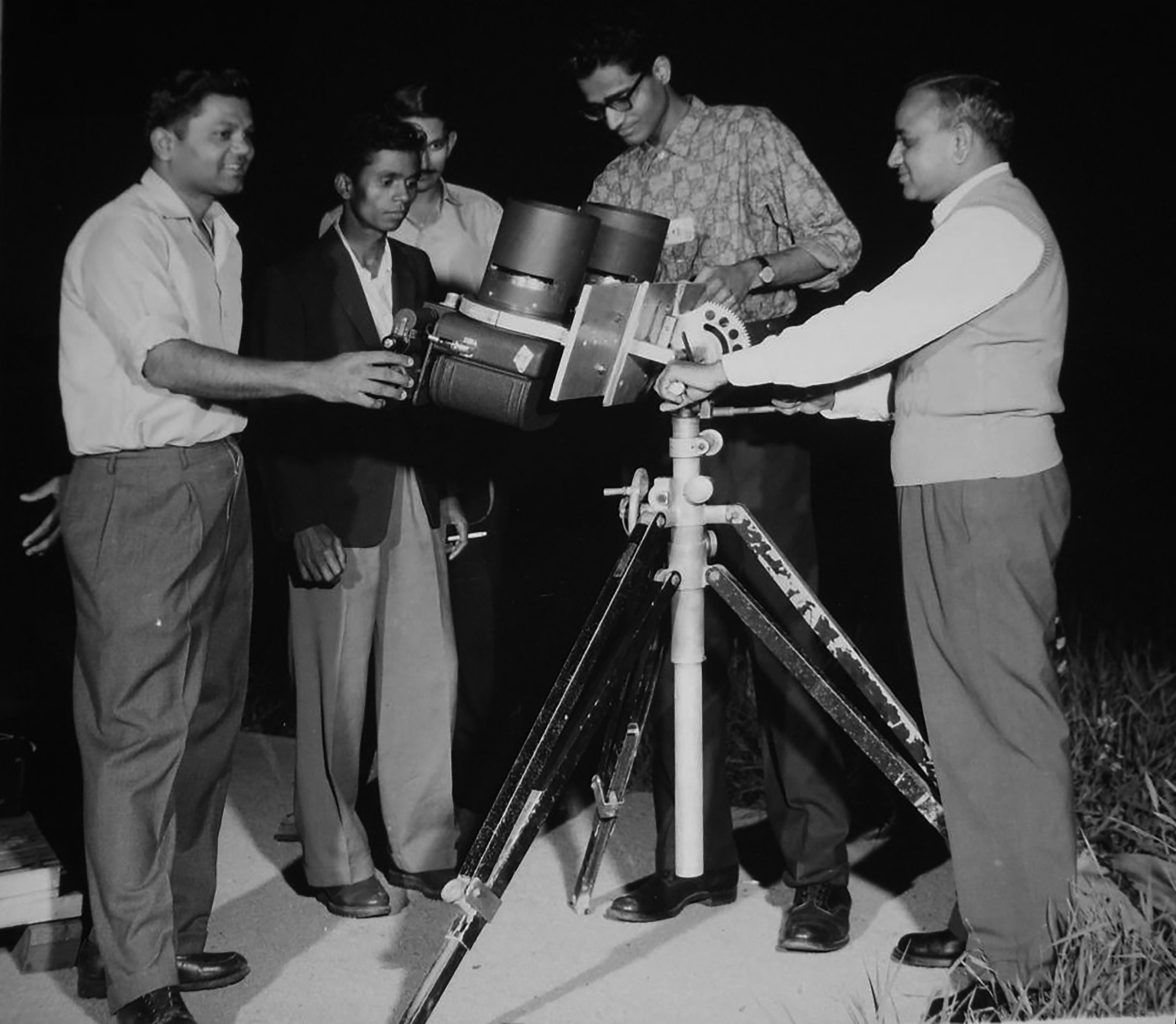 Some of the early recruits of Sarabhai’s were trained by NASA at its Wallops station in Virginia. In this picture, they are familiarising themselves with the operation of the Kodak K-24 aerial camera suitably modified for vapour trail photography with custom-made mountings. 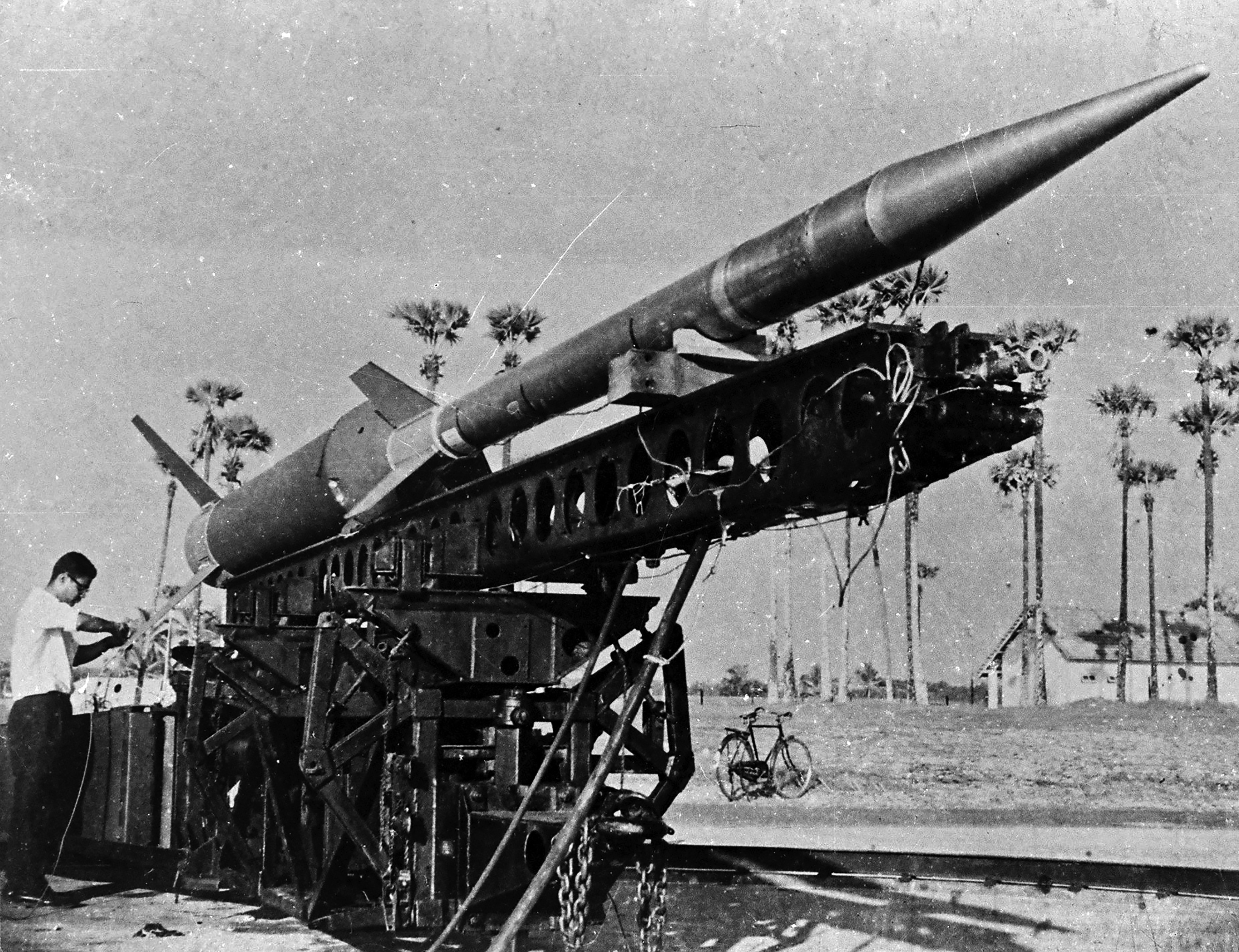 NASA also supplied Nike-Apache sounding rockets (including the one for the inaugural flight) and some tracking equipment. Note the bicycle in the background; it was the only readily available mode of transport in Thumba Equatorial Rocket Launching Station, in Kerala, in the 1960s. 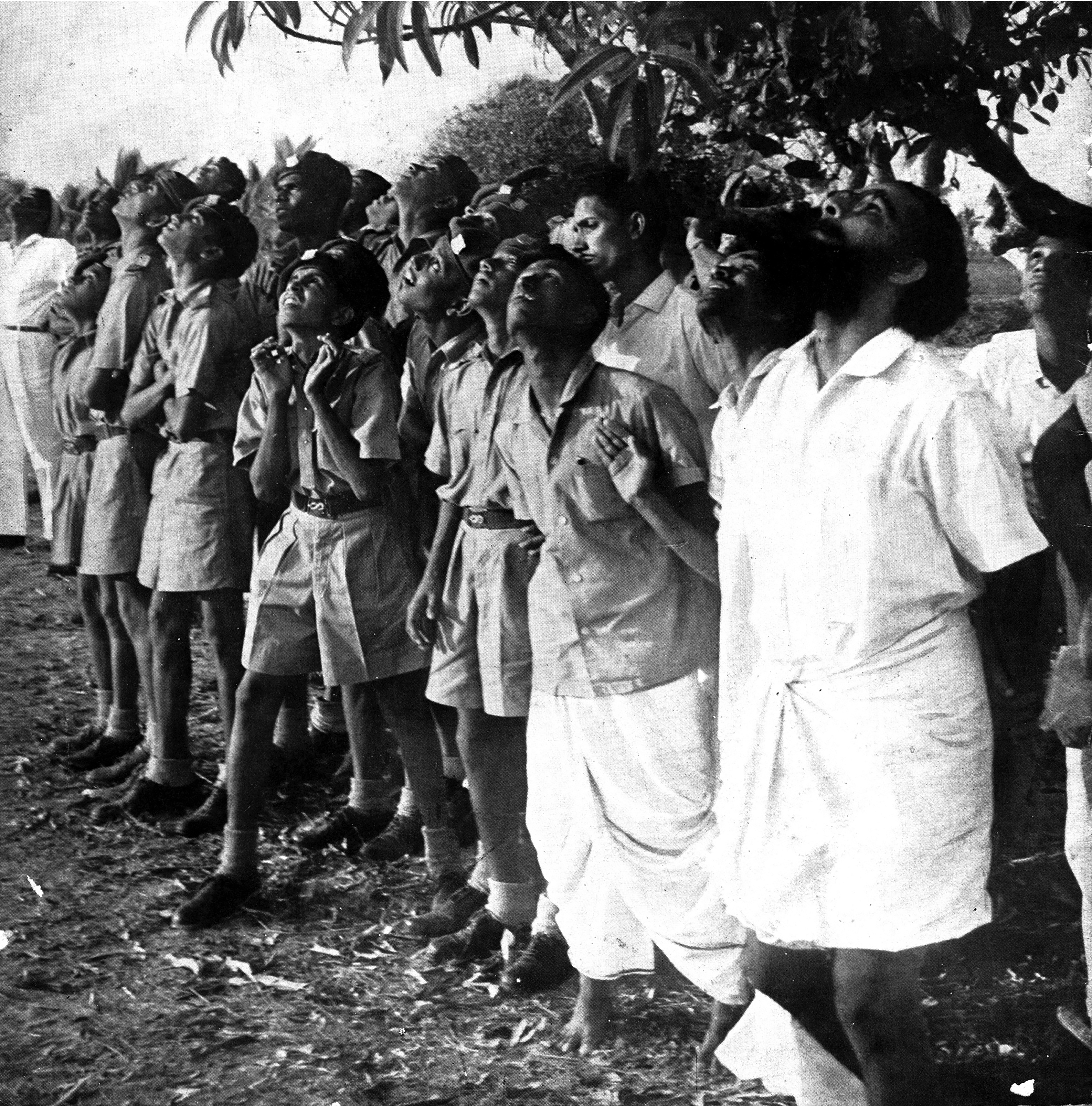 The very first rocket flight from Thumba was watched by boy scouts, among others. 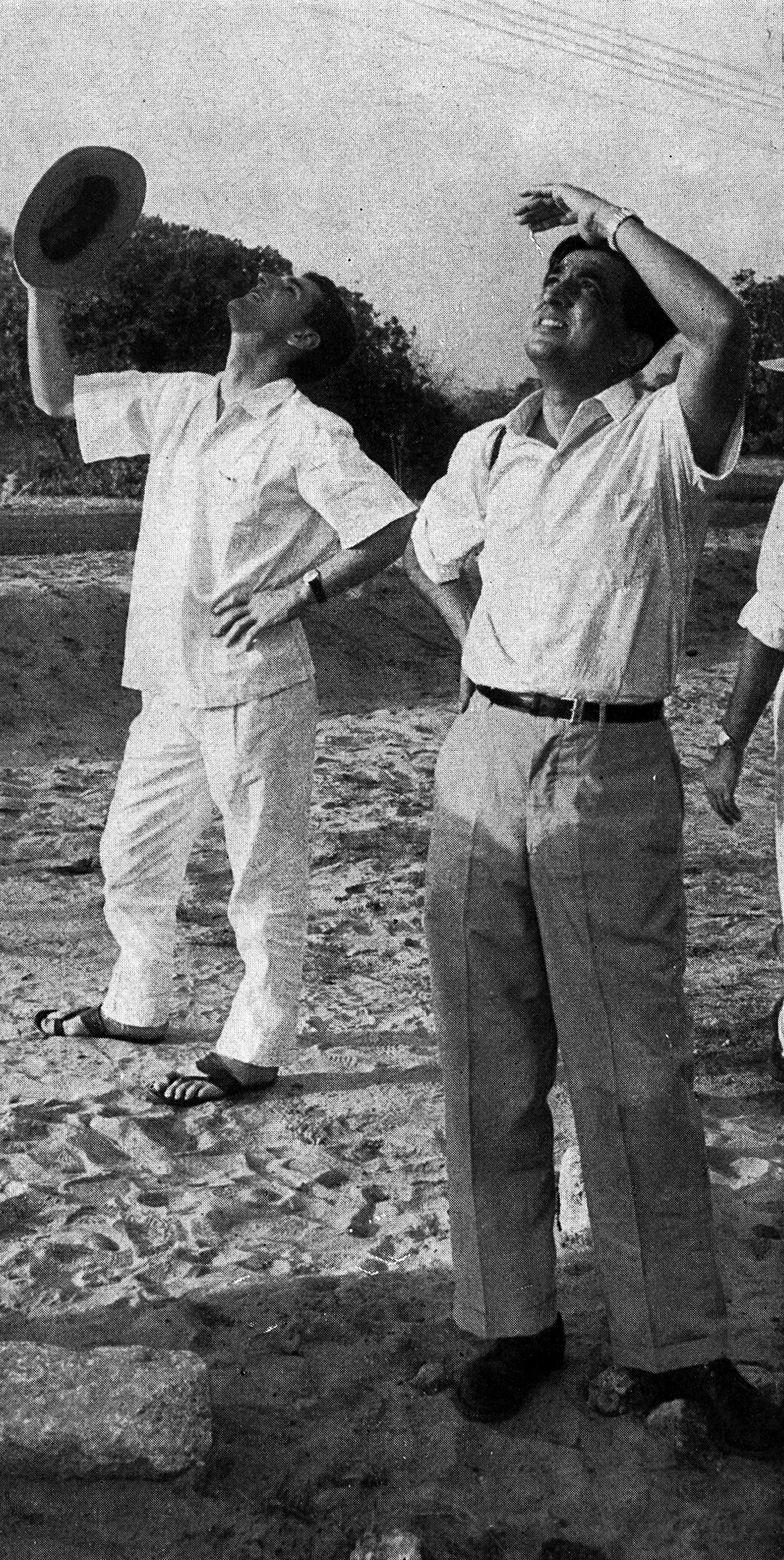 D Bhavsar (right), the project director for the first sodium vapour cloud experiment, watching for the release of the vapour. 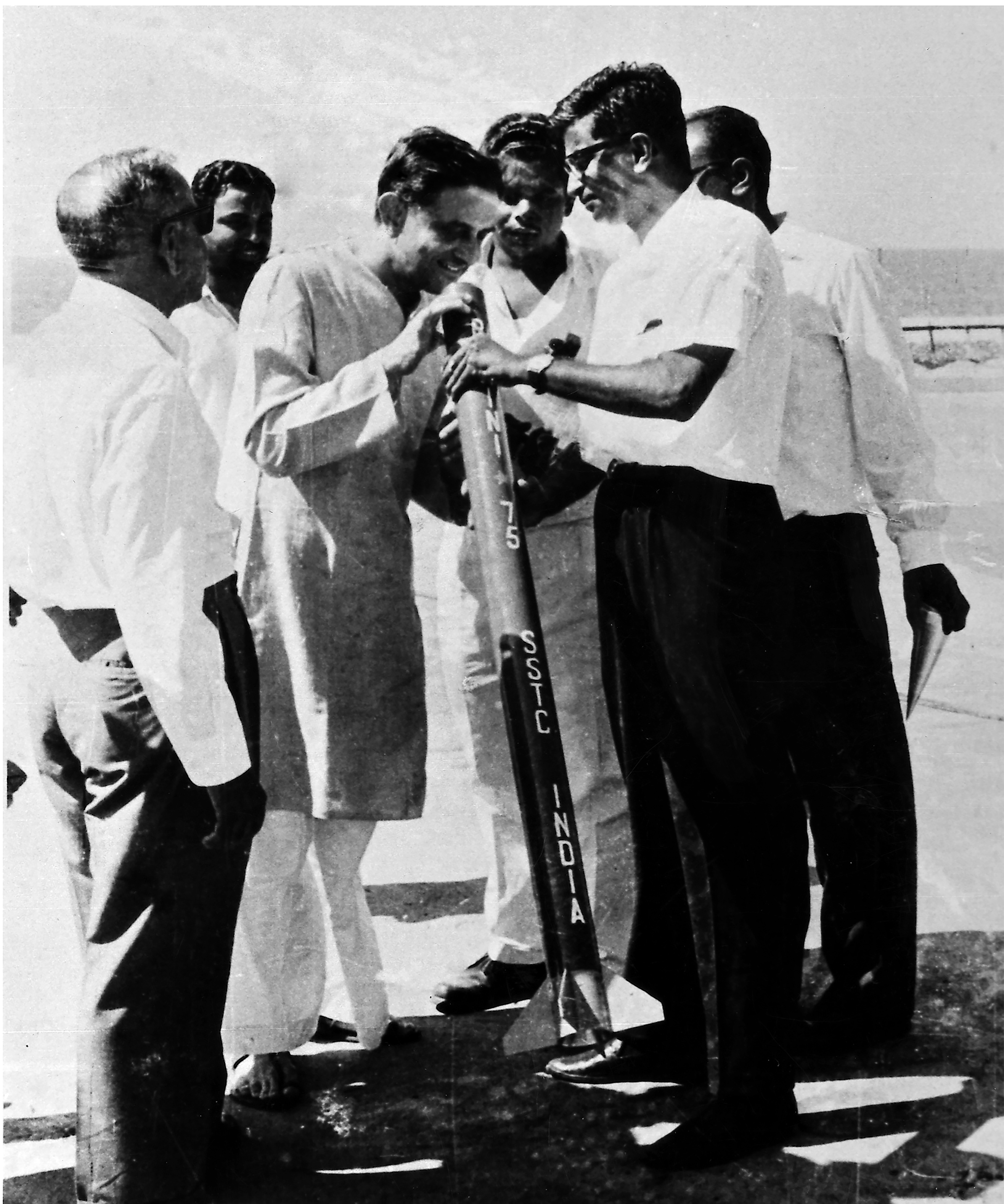 The very first indigenous rocket made by ISRO was known as RH-75 (RH stands for Rohini and 75 refers to the diameter of the rocket in mm). It was made from readily available extruded aluminium alloy tubes from the market. YJ Rao (with spectacles) is showing Sarabhai the RH-75. 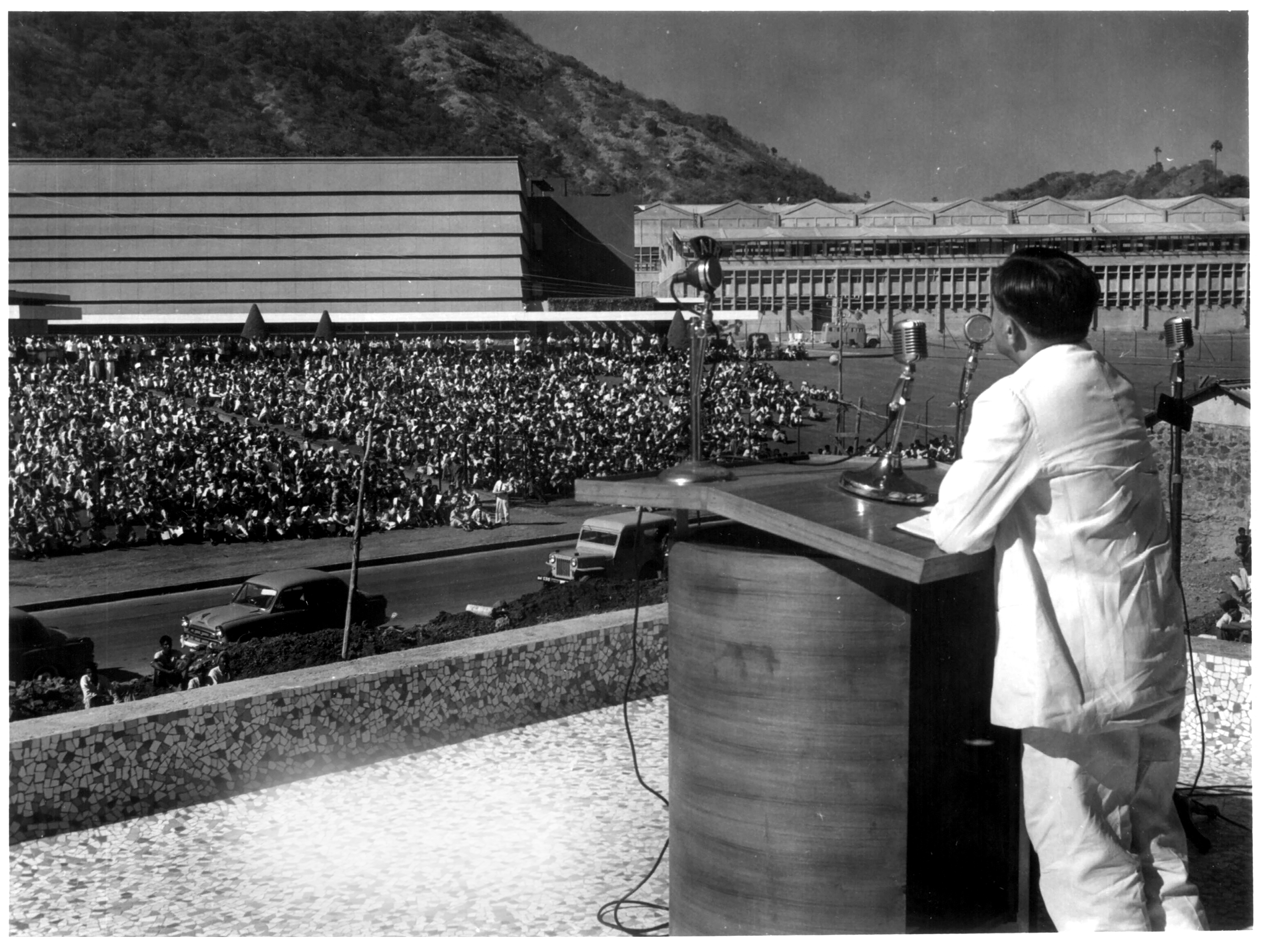 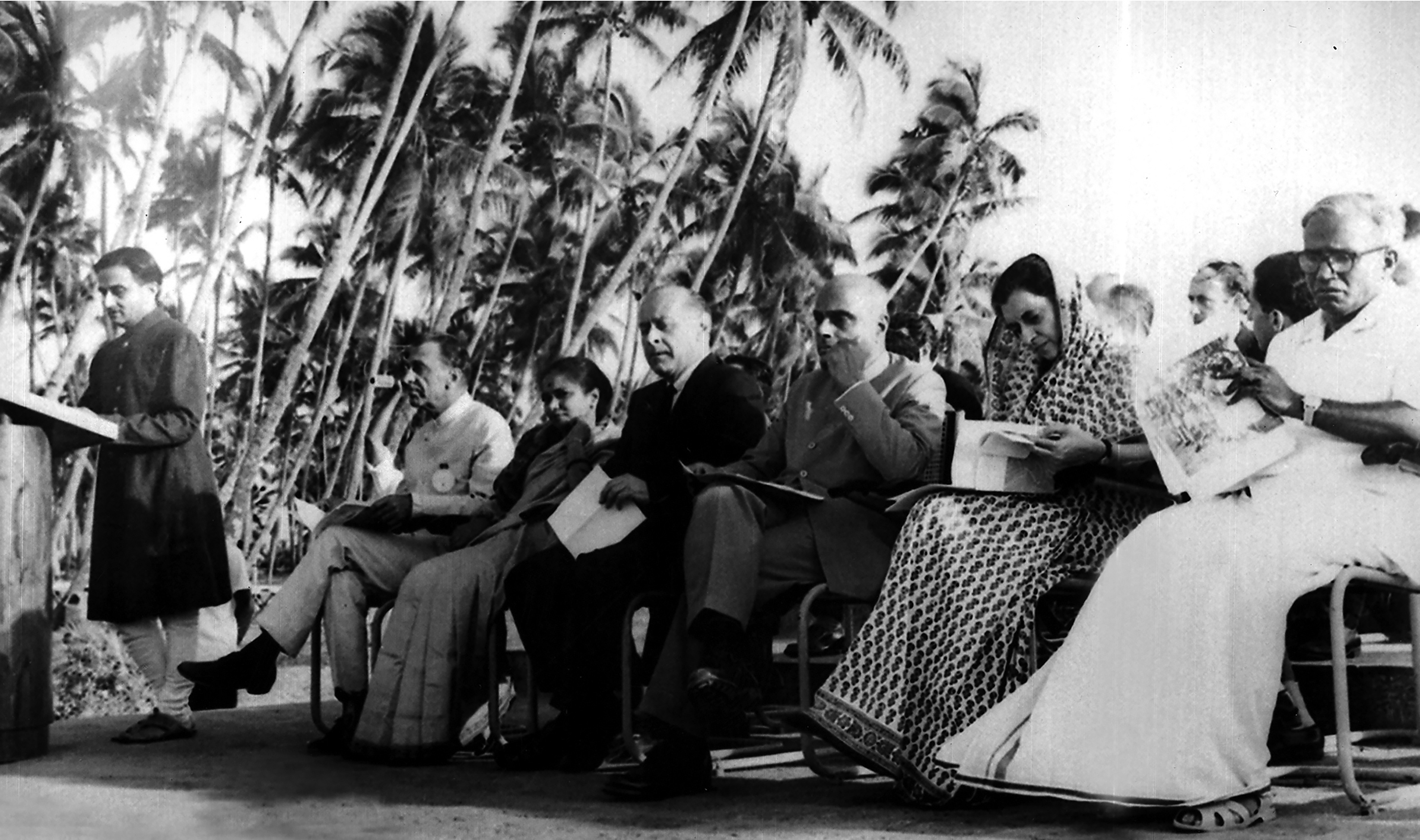 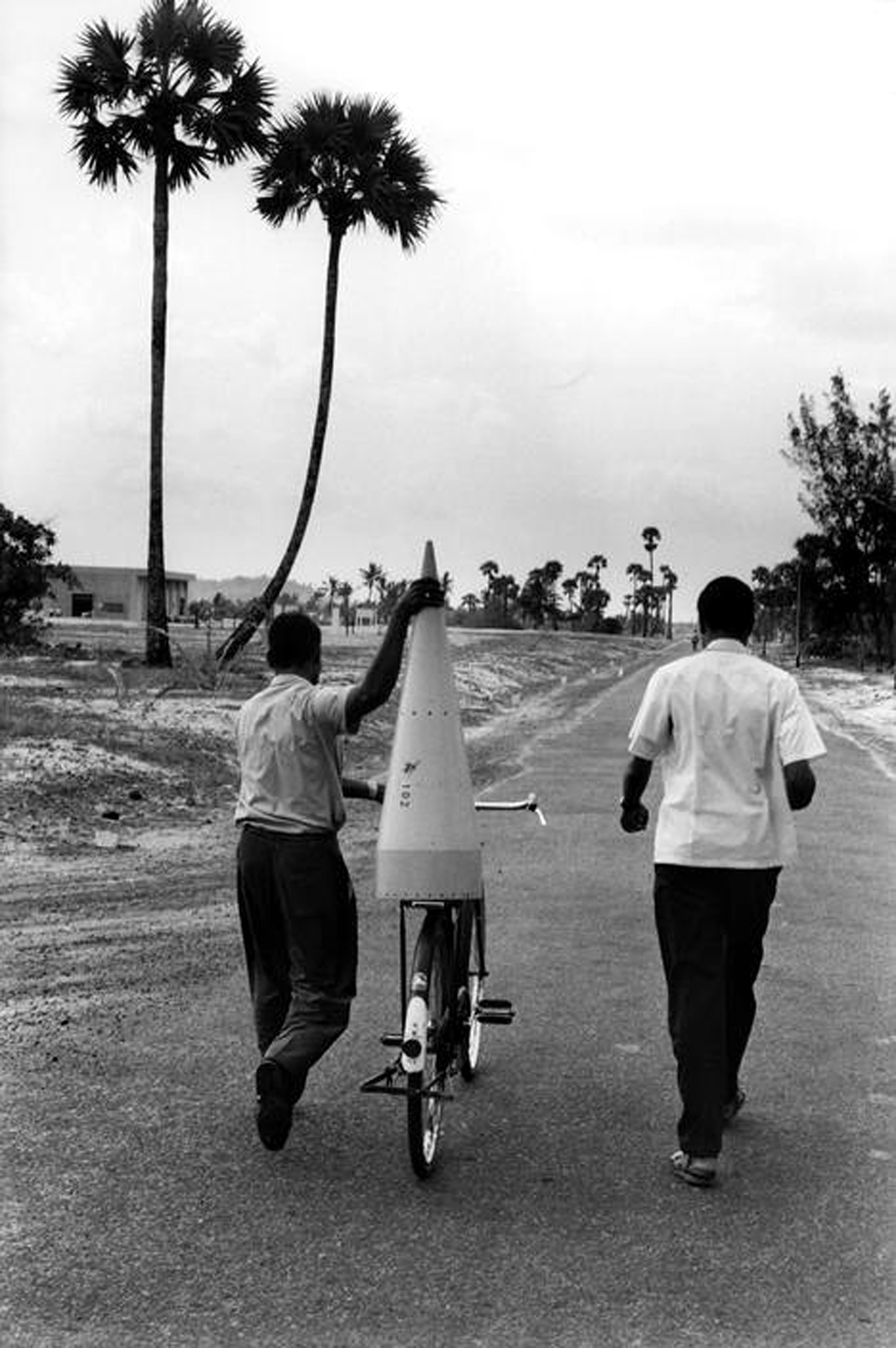 This photograph of the rocket nose cone on a bicycle taken by Henri Cartier-Bresson is by now famous. On the right: engineer, CR Sathya. His assistant, Velappan Nair, is taking care of the nose cone. 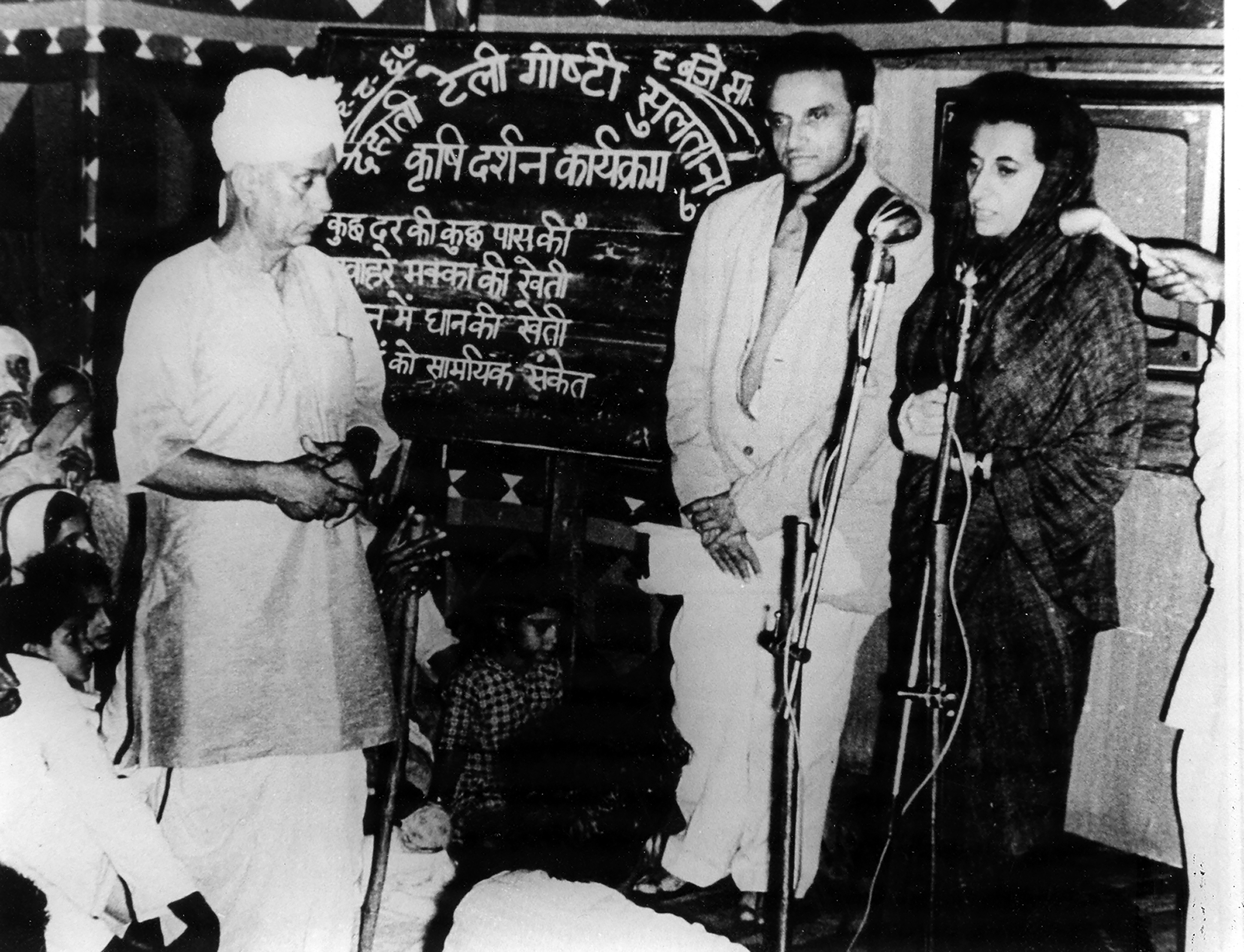 Sarabhai and then prime minister Indira Gandhi with a farmer during the inauguration of Krishi Darshan, a TV programme meant exclusively for farmers. Sarabhai conceived of this programme to convince the government that TV could be used to inform farmers of the latest developments in agriculture.
Top

The rocket for the first time was fitted with Vikram Processor designed, developed and fabricated by the Chandigarh based Semi-Conductor Laboratory coming under Department of Space.
Top

I mis-construed one of the spectator shouting like a chimpanzee.
Top 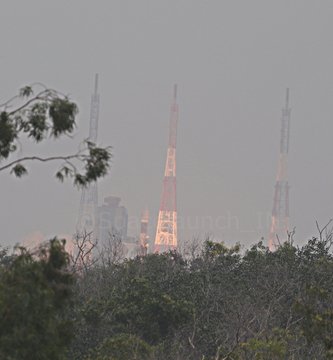 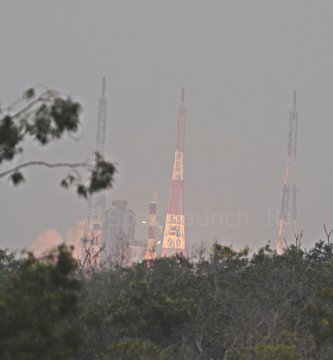 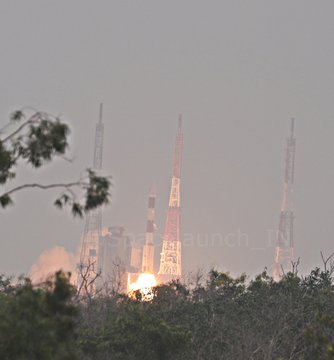 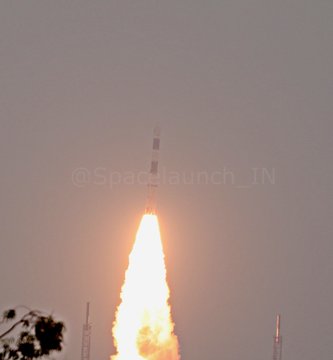 The rocket for the first time was fitted with Vikram Processor designed, developed and fabricated by the Chandigarh based Semi-Conductor Laboratory coming under Department of Space.

I remember the Vikram processor being on board a PSLV in Sept/2009( carrying Oceansat-2). Was that a different version of the Vikram chip, or the same, but actually fabricated elsewhere( i.e Taiwan, S.Korea), and designed by ISRO.
Top

This tome the wafer onwards production saa ondigenpus. Previoudly sent to am outside fab unit
Top

Amber G: thanks for catching that. I meant 0.25m
Top

Plz do consider crowdfunding this effort. Will be happy to contribute whatever little I can.
Top

SSLV launch in Dec (trial launch) per that BusinessInsider article. Would be great if it happens!
Top

Prem Kumar wrote:SSLV launch in Dec (trial launch) per that BusinessInsider article. Would be great if it happens!

Have any of the non proliferation ayatollahs issued fatwas regarding the SSLV?
Top 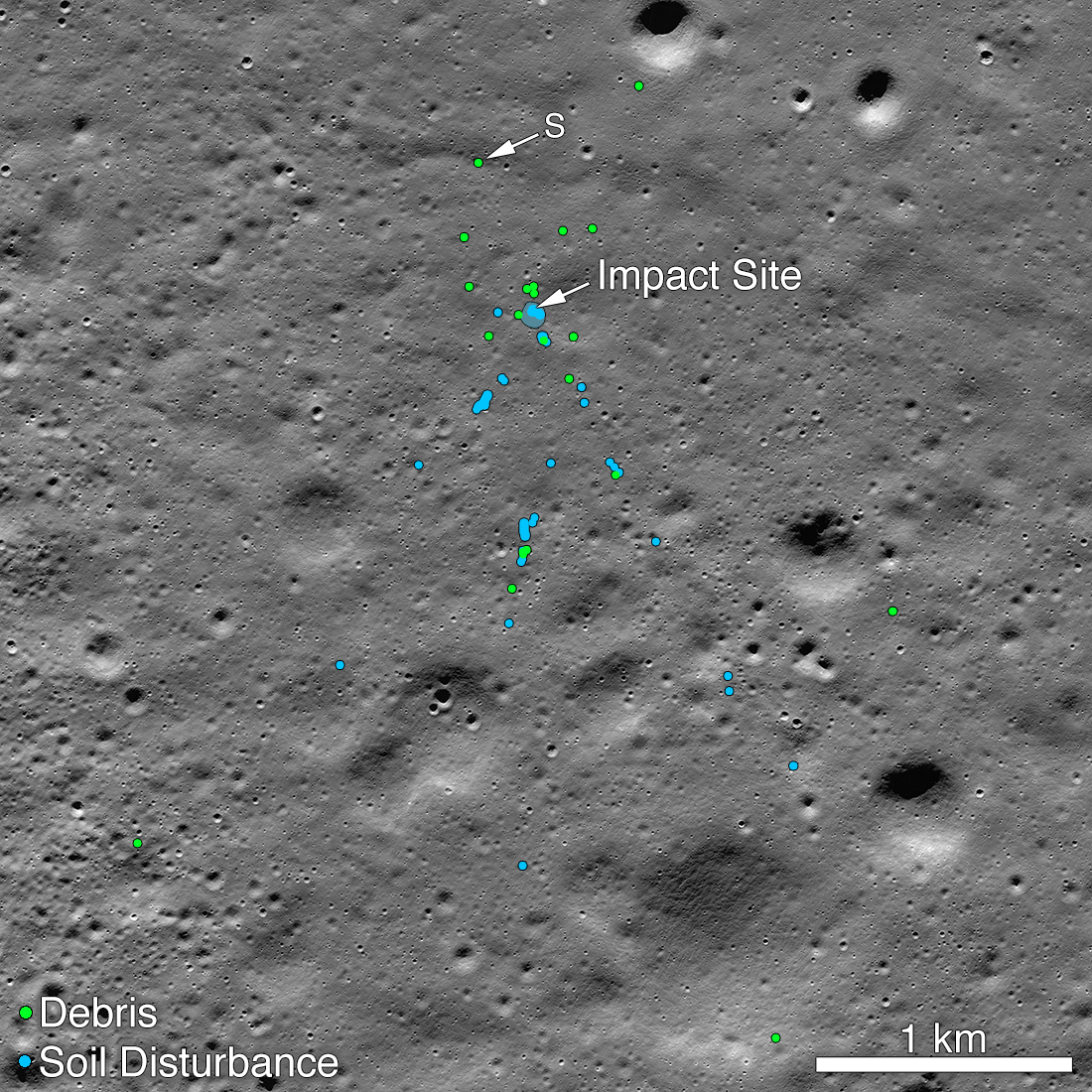 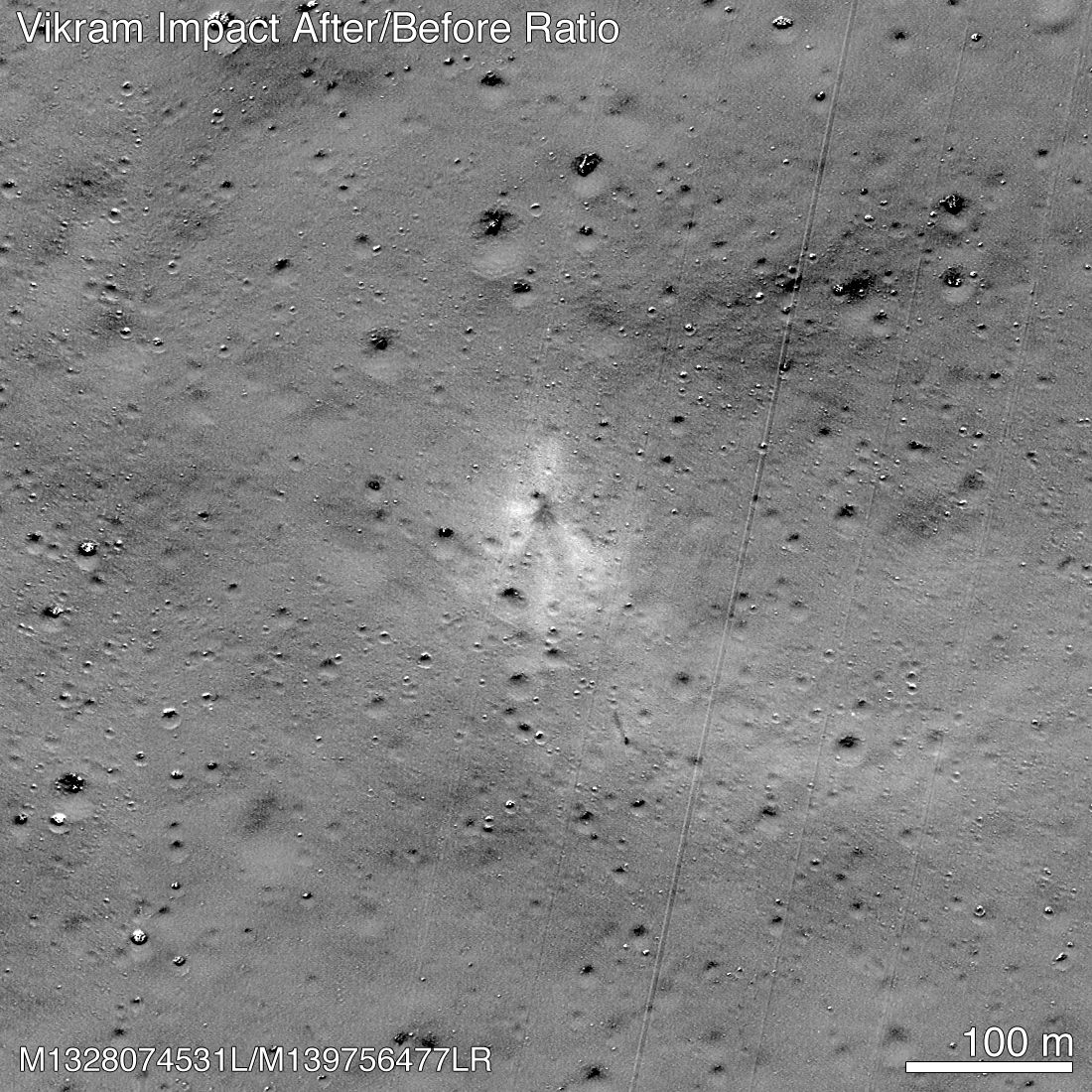 The Chandrayaan 2 Vikram lander was targeted for a highland smooth plain about 600 kilometers from the south pole; unfortunately the Indian Space Research Organisation (ISRO) lost contact with their lander shortly before the scheduled touchdown (7 September in India, 6th September in the United States). Despite the loss, getting that close to the surface was an amazing achievement. The LROC team released the first mosaic (acquired 17 September) of the site on 26 September and many people have downloaded the mosaic to search for signs of Vikram. Shanmuga Subramanian contacted the LRO project with a positive identification of debris. After receiving this tip the LROC team confirmed the identification by comparing before and after images. When the images for the first mosaic were acquired the impact point was poorly illuminated and thus not easily identifiable. Two subsequent image sequences were acquired on 14, 15 October and 11 November. The LROC team scoured the surrounding area in these new mosaics and found the impact site (70.8810°S, 22.7840°E, 834 m elevation) and associated debris field. The November mosaic had the best pixel scale (0.7 meter) and lighting conditions (72° incidence angle).

The debris first located by Shanmuga is about 750 meters northwest of the main crash site and was a single bright pixel identification in that first mosaic (1.3 meter pixels, 84° incidence angle). The November mosaic shows best the impact crater, ray and extensive debris field. The three largest pieces of debris are each about 2x2 pixels and cast a one pixel shadow.

India will put into orbit another of its sharp-eyed surveillance satellite RISAT-2BR1 with synthetic aperture radar on December 11, an Indian space agency official said on Tuesday.

"The next space mission is to orbit RISAT-2BR1, a radar imaging satellite. The rocket launch will be on December 11," an official of the Indian Space Research Organisation (ISRO), who spoke on the condition of anonymity, told IANS.

Piggy backing on the 615 kg RISAT-2BR1 in the Polar Satellite Launch vehicle would be four foreign satellites that India will be carrying for a fee.

According to the official, another radar imaging satellite 2BR2 with synthetic aperture radar will soon follow after December 11 mission.

A clutch of such sharp-eyed satellites are necessary to look down at the earth on a continuous basis. In May this year, ISRO had launched 615 kg RISAT-2B.
Top

News reports say that the RISAT-2BR series are a more sophisticated version of TECSAR1 (from Israel, which was named RISAT-2). Much better resolution (0.35 m)

I hope we are using the humongous amount of data from these satellites to perfect AI/ML algorithms to detect aberrations, auto-classify objects, flag threats etc. Its a treasure trove of data to build next-gen AI systems and to train an army of math & comp-sci techies. Can spin-off many startups & commercial products
Top

Some changes/ surprises already to the Dec 11 launch- 4 strap-ons, 9 customer satellites instead of the previously announced 4, and 628kg for RISAT-2BR1( as opposed to 615kg, no big deal, still..)

PSLV-C48, which is the 50th mission of PSLV, will launch RISAT-2BR1 from the First Launch Pad (FLP) of Satish Dhawan Space Centre (SDSC) SHAR, Sriharikota. The launch is tentatively scheduled at 1525 Hrs IST on December 11, 2019, subject to weather conditions.

RISAT-2BR1, a Radar imaging earth observation satellite weighing about 628 kg, will be placed into an orbit of 576 km at an inclination of 37 degree.

Plz do consider crowdfunding this effort. Will be happy to contribute whatever little I can.

In CY-2 the Orbiter's LAM was used for Lunar orbit transfer. But since CY-3 has no orbiter, the Lander would be reconfigured.

1. CY-3 Lander will have an added jettison-able propellant tank to fuel LEO to lunar orbit transfer.

2. Bcoz Lander has more engine trust than the CY-2 Orbiter AND it does NOT have 2400Kg orbiter in tow, hence this time the travel time to Lunar orbit will be MANY times lesser.

It will have added hardware for earth communication & software for lunar transfer navigation in addition to a new landing software.+ whole lot of other improvements.

So IMHO GSLV-Mk3 will be a gross oversized for the purpose, unless India chooses to send two landers.

I dont think PSLV has can launch that much to GTO. GSLV Mk2 should be sufficient.
Top

"If" we can launch the lander via PSLV and it incrementally costs only $10 Million for a new mission, the CY2 lander-failure will end up becoming a blessing in disguise

We can keep launching multiple longer-lasting, sophisticated landers that sync via the orbiter during the life of the orbiter. We can launch a new lander mission once a year to map out various areas of the moon, get more samples etc. We can even launch foreign landers, conduct lander competitions etc.

Repeat what PSLV does to LEO, but now for lunar missions --> "LunarMission-as-a-Service" (just like Software-as-a-Service). They'll get:

1) Launcher
2) Orbiter for communications
3) Telemetry, access to your own lander's data via separate login/password
Top

All naarmal.. onto more unpredictable things, like lunch in the canteen..
Top