All threads that are locked or marked for deletion will be moved to this forum. The topics will be cleared from this archive on the 1st and 16th of each month.
Locked
4480 posts

Quite possible. The engineered riots all over India gives the Pakis covering fire to try something nasty & have some local Indian Muj group take responsibility.

Hope nuclear redlines are clear on such misadventures
Top

PaXi in no position to enjoy.
Top

Baba & a couple of other handles are tweeting that Karen Village of PoK has done ghar-wapsi. Maybe related to LoC fence cutting couple of days back
Top

its keran not karen
Top

Are we doing reverse kargil?
Top

Once again Neelum Valley is under fire.. #IndianArmy unprovoke firing observed as per local sources. People are now compelled to leave their houses due to heavy fire of Artillery by Indian forces.
#Kashmir #AJK

Tweet captured as an image .. no way to validate authenticity

No reverse kar gill. .. u cant hold a small piece of land with river behind ur back... just a localised tactical operation... we dominate this sector though the pakis built a alternate route to bypass this road ... maybe the other road is snowed out and pakis perforce have to use old route...
Top

Havd we used MBRLs too?
Top

Something big has occurred in PoK in the last couple of days. Same news from multiple non-Indian sources

Breaking News
From a confirm source
Large scale Surgical strike in PoK. Doval sahib is busy on PoK issue
India is removing fences from LoC
Media will come up with this shortly
Pakistan feared this, therefore unrest in India has increased, protesters don’t know why they protesting
6:40 AM - 20 Dec 2019

I can confirm the news. The Indian action was in the Neelam Valley of POK, and I doubt if this is the end of the story.

on a lighter note..it is not confirmed until an official denial comes

And then they also make a lot of hue n cry about Chawinda being the place to look out.

Why are the Pakis so spooked?
Top

Chawinda is 10 miles from border, very much within range of almost all guns. Could Chawinda be source of 3 footballs by bababanaras?
Top

Is this the same Chawinda where the battle of Chawinda in 1965 took place between India and Pakistan?

vimal wrote:Is this the same Chawinda where the battle of Chawinda in 1965 took place between India and Pakistan?

The area around Chawinda is too densely populated. Heavy Arty firing across the IB, would almost certainly be considered an act of war. It's not a stage in the esclation ladder we'd like to be at - yet.
Top

Check out the picture of the terror launchpad in PoK burning in the Daily Excelsior article below! Its a building complex destroyed and is surrounded by a number of other buildings that look unscathed. It was a precision strike.

Though the report says that the surrounding buildings have been cleared off civilians, the accuracy of the strike is pretty awesome

Prem Kumar wrote:Check out the picture of the terror launchpad in PoK burning in the Daily Excelsior article below! Its a building complex destroyed and is surrounded by a number of other buildings that look unscathed. It was a precision strike.

Though the report says that the surrounding buildings have been cleared off civilians, the accuracy of the strike is pretty awesome

It looks like the pic from the 21st Oct arty strike at the Neelam valley. Much as I would like to see one, I don't think this paper would have access to a pic like this, if the army has not published one.
Top

Pakistan army last night made yet another attempt, third in past one month, to regain four to five posts which they had lost in retaliatory action by the Indian troops earlier"

Four five posts occupied by IA, and even defended to counter attacks. Sadly this success story will not be let out as it basically a salami slicing of PoK by us.

There is a spat ongoing between so called "osint" handles and MSM and official PR by govt/IA. I personally am vary of these osint handles though i do follow a couple of them on Twitter. Simple fact is that these guys have no way of accessing real time events on a long term basis unless their source is DGMO himself!
Top

the pic looks quite authentic and consistent with the terrain/topo..soldiers these days are clicking pics/vid from their mob phones..IA is perched on the heights along the river overlooking Paki villages in this area. I dont think any posts have been captured... its not possible to capture 4 or 5 posts and hold them for any length of time as there is a river in between. u dont want a river on ur back ...
Top

https://twitter.com/MFA_China/status/12 ... 51392?s=20
We are following the situation in Kashmir very closely. We call on India and Pakistan to exercise restraint to avoid escalation. Dialogue is the only way out for peaceful settlement of their disputes.
Top

The situation at the border is 'war' like. TSP is moving big pieces. Igla's have been supplied to forward base (as there are anticipation of TSPAF actions). We have been at very regular interval destroying Forward post, positions at shallow depths and some in depth that are directly responsible for terrorist launch pad or operations. Both side have not yet gone full time at each and every position (which would be war).
I guess what started the 'latest' round was the TSP uniformed/ununiformed soldier mutilated one of our Jawan. We cut 3 (recall COAS statement, ek ke badle 3) and did some salami slicing. Pliss to follow baba ji
Top

How would Igla help with PAF staying well behind the 10KM no fly zone? Even if they cross that line, what are the chances of our ground troops noticing a PAF jet?

Nothing sort of it happening. Nothing happened after August, nothing special is going to happen. There will be cross border shelling and raids, with varying intensity.
Top

This is in anticipation of, or getting prepared, or being warned and getting ready.
On how someone will identify enemy planes and use Igla - well I am sure they did not buy it for decorative purposes, there should be ways...some 30-40 years ago, it was used quite successfully in AFG and in Kargil the enemy employed similar missiles and brought down air assets. I am sure our forces are competent enough to repeat these.
Top

^^ Paki heavy pieces here means tanks not war planes. There were reports of Paki tanks moving in near the Border. What will be supplied and more appropriate will be Spikes and Nags not Iglas.
Top

1 ) seen heavy movement of tanks etc on rails in N india on a train journey yesterday. 2) the Army AD units are trained to identify a/c , choppers ...re equiping units with new weapons in an ongoing process ... its not about 10 km no fly zone and nothing to do with hot/cold on the LOC/Border. there is a role for all weapons 3) MAPADS have also been used in siachen by both sides. there was a famous incident when a paki chopper with some big hot rod CO was shot down which put paid to some grand Paki offensive in the mountains.
Top

India is ramping up its infrastructure development along the border with China. The Border Roads Organisation has constructed 75 percent of the entire length of strategic roads along this border assigned to it, with plans afoot to finish 11 more by this year and nine more by next year, government officials said.

The new 11 roads, known as India-China Border Roads (ICBRs), that the Border Roads Organisation (BRO) plans to complete by March will be located along the Line of Actual Control (LAC) in Ladakh, Uttarakhand and Arunachal Pradesh. The BRO also plans to complete about nine more such roads by March 2021. It has set a target to complete the 61 of the 73 ICBRs assigned to it in three years.The balance 12 roads are with the Central Public Works Department. With such road development along the Chinese frontier, the BRO is making efforts to reduce the ‘differential’ or the distance between the closest Indian road along the LAC and the Chinese one across the border. This will allow the Indian forces to quickly mobilise in a particular sector during an untoward incident and counter any possible Chinese movements.

The BRO is also constructing 125 strategic bridges in different sectors of the LAC, including Ladakh and Arunachal Pradesh. There are plans to construct 200 more bridges along this border.

Meanwhile, the Standing Committee on Defence in a report tabled to the Lok Sabha Speaker last month had recommended that bridges on the rivers in the North-East should be constructed at more than two places. “So in case of one bridge is swept away due to natural fury, other option can be exploited. This move will definitely help in reducing the distance for the natives as well as help the forces to reach places in time,” it had said.

There are also plans of constructing 19 tunnels along the frontiers with China and Pakistan with work having picked up pace on three important ones on the eastern front, as reported by ET. Army Chief General Manoj Mukund Naravane earlier this month had said that force will focus on infrastructure development on the eastern front.

The BRO, however, is facing a shortage of funds, which has affected the construction and maintenance of bridges and roads and other developmental activities, according to the Standing Committee. It recommended that in view of the “atmosphere” in India’s neighbouring countries, the overnment must prioritise spending and develop infrastructure and roads so that the forces can have effective mobility troops and machine.

https://twitter.com/AdityaRajKaul/statu ... 5824411651 ---> Photograph of the day. A Jammu & Kashmir Police Jawan rescuing a Kashmiri child from an encounter site in Khrew of Pulwama in South Kashmir this afternoon. Two Jaish terrorists who were hiding in a residential area were eliminated by the security forces.

https://twitter.com/Aryanwarlord/status ... 1165167617 ---> Even as a gun battle raged on, a battle that would claim the life of one Jammu & Kashmir Police member and one Indian Army soldier. This soldier/policeman left all of that to ensure a child got to safety. This man is a hero for all of India. May the creator bless his tribe. Salute! 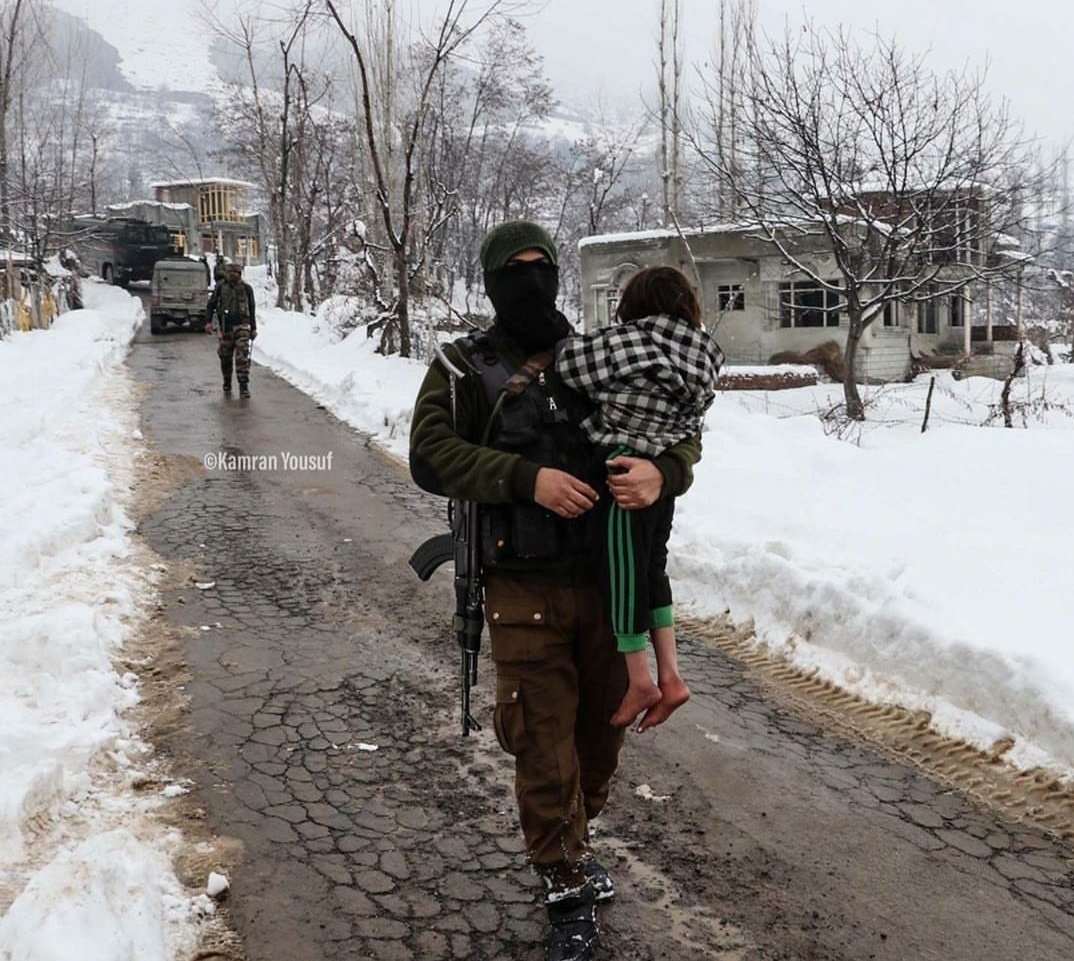 Can enlightened gurus id the shell that porkis got last night, to my untrained eyes looks like fired without warhead, why would IA do something like that :

It can be a BGM 71 Tow of the Pakistani Army and not something fired by us.
Top

Now under phase-II the coastal surveillance system will be enhanced with 38 more radar stations and 5 command and control centres along the coastline.

CSS has a network of remote radar stations with sensors, electro optics, meteorological and VHF radio communication units integrated with the CC centers.

The missile is indeed TOW from PA.
Top

Can you help me out by signing this petition?
http://chng.it/GS5Wpr5X
Top

Twitter is replete with baba banaras, NDTV and IA posting blowing a ammo dump along with other recent activity in the same area as the one where our 5 bravehearts were martyred
Top

It is true. Paki positions in pok were targeted by precision artillery. Drone footage of it was released by the army. Here's the link to Vishnu's tweet which contains the video:

Users browsing this forum: No registered users and 32 guests