The Military Issues & History Forum is a venue to discuss issues relating to the military aspects of the Indian Armed Forces, whether the past, present or future. We request members to kindly stay within the mandate of this forum and keep their exchanges of views, on a civilised level, however vehemently any disagreement may be felt. All feedback regarding forum usage may be sent to the moderators using the Feedback Form or by clicking the Report Post Icon in any objectionable post for proper action. Please note that the views expressed by the Members and Moderators on these discussion boards are that of the individuals only and do not reflect the official policy or view of the Bharat-Rakshak.com Website. Copyright Violation is strictly prohibited and may result in revocation of your posting rights - please read the FAQ for full details. Users must also abide by the Forum Guidelines at all times.
Post Reply
2455 posts

YashG wrote:Absolutely.
In battle of plassey - 12 odd cast iron cannons went against 30 or more cannons of the Bengal state. And you knw what happened next.
But our 'thops' are also good are good as well. This piece of history is behind us. That 1000 year humiliation is also never going to happen again.

If you look at the state of indigenous defence r&d for most of our post-independence history and the lack of focus and support to it even now, you might be right to wonder whether we learnt any lessons from the historical debacles. I mean we are importing rifles from the US right now for the Army.
Top

Aditya_V wrote:The question is why were they dependent on a single leader and why was the defeat not avenged , shows there was lack of institutional planning which continues to this day.

You may have confused Peshwa Madhavrao with someone else (probably his older brother Vishwasrao who died at Panipat) if you were talking about the defeat at Panipat. Madhavrao was only 16 at the time of Panipat and did not fight there. He became the Peshwa a few months after the battle of Panipat when his father, Peshwa Nanasaheb (aka Balaji Bajirao) died. His uncle Raghunathrao was made regent.

As for avenging the defeat, as Adrija has pointed out 10 years later the Marathas had got back their territory in the north and even occupied Delhi again. The Rohillas who had sided with Abdali were defeated by Mahadji Shinde in 1772-73 as well. Najib Khan Rohilla was already dead by then however, so the Marathas dug his bones out and destroyed his grave after defeating his son in battle.

Madhavrao's problems during his reign were mainly because of infighting with his uncle Raghunathrao. He would have achieved a lot more even in the short time he had had it not been for Raghunathrao scheming and going against him at every juncture, especially during their campaigns in the south against the Nizam and Hyder Ali.
Top

YashG wrote:Absolutely.
In battle of plassey - 12 odd cast iron cannons went against 30 or more cannons of the Bengal state. And you knw what happened next.
But our 'thops' are also good are good as well. This piece of history is behind us. That 1000 year humiliation is also never going to happen again.

If you look at the state of indigenous defence r&d for most of our post-independence history and the lack of focus and support to it even now, you might be right to wonder whether we learnt any lessons from the historical debacles. I mean we are importing rifles from the US right now for the Army.

Yes. Quite so. This cant/shudnt be allowed to go on for any longer.
Top

Book Release: Prithviraj Chauhan - a Light on the Mist in History
Namaste Everyone,

Prithviraj Chauhan – the household historic name in India that evokes passion and emotions alike; an immortal chapter of India’s bloody yet glorious history. Many have been intrigued with the controversies on historical figures like him? Did you ever wonder what truth lies beyond the layers of exaggeration, bias and myths that fill the whole spectrum of narratives of historical Prithviraj?
This book on Prithviraj Chauhan tries to peel off and present the answer to such questions. Please read and share with near and dear ones who might be interested.
Genre - History, Non-fiction
Formats - Paperback, E-Book
Paperback:
White Falcon Publishing Bookstore - https://store.whitefalconpublishing.com ... in-history
Amazon - https://www.amazon.in/dp/1636400191
https://www.flipkart.com/prithviraj-cha ... 83d5763021
E-Book : Kindle Edition - https://www.amazon.in/dp/B08KHF857P/
ISBN: 978-1-63640-019-8
Pages: 250
Language: Non-Tharoor English

Note: As soon as my cost in publishing is recovered, any & all further author royalty from this book’s sale will be donated to a charity. Charity details & evidence of fund transfers shall follow if/when we cut over to that stage. 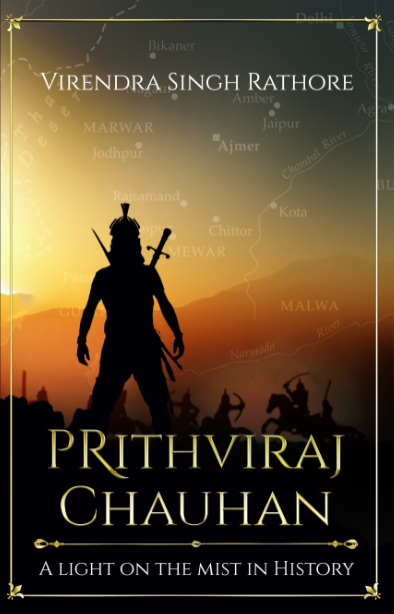 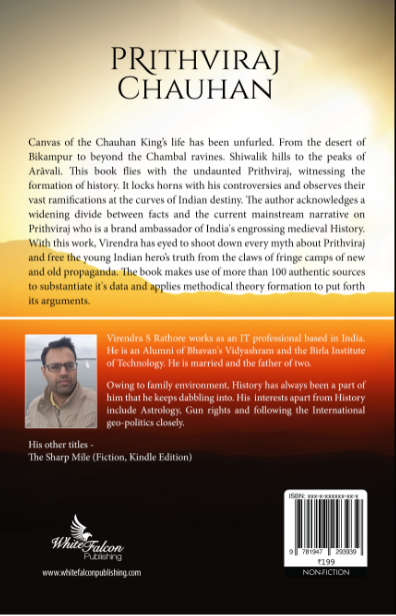 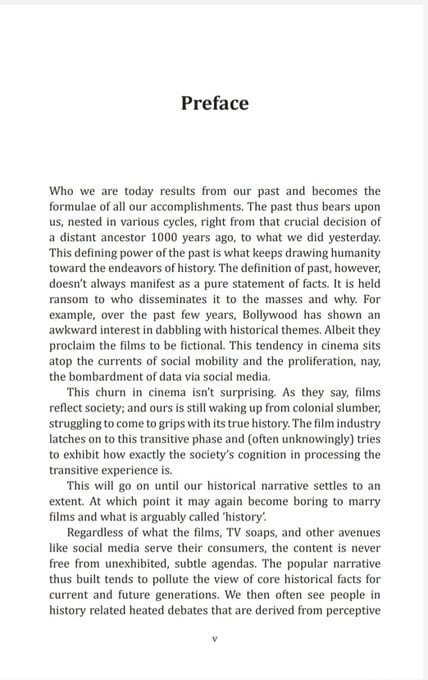 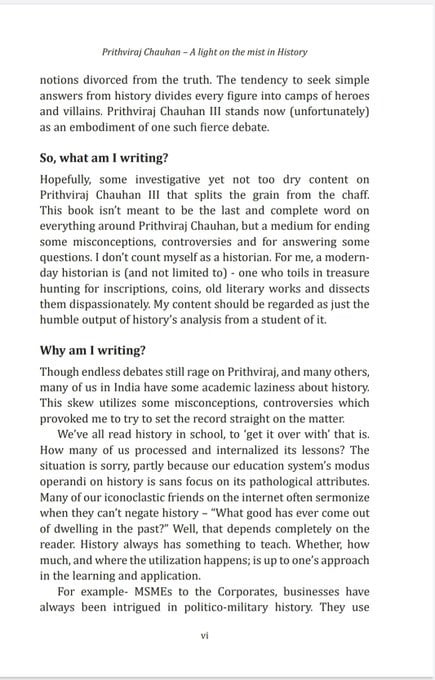 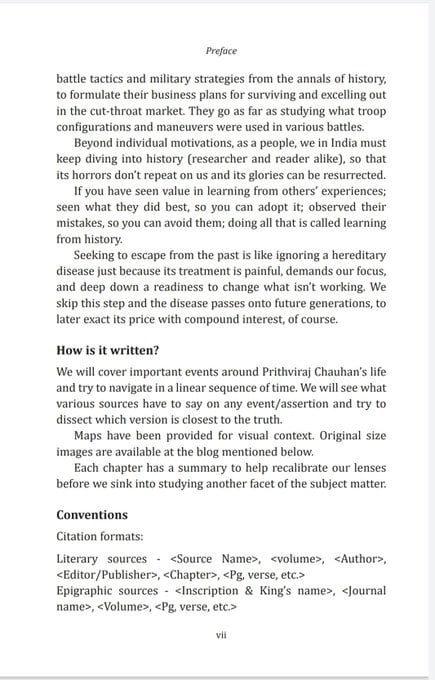 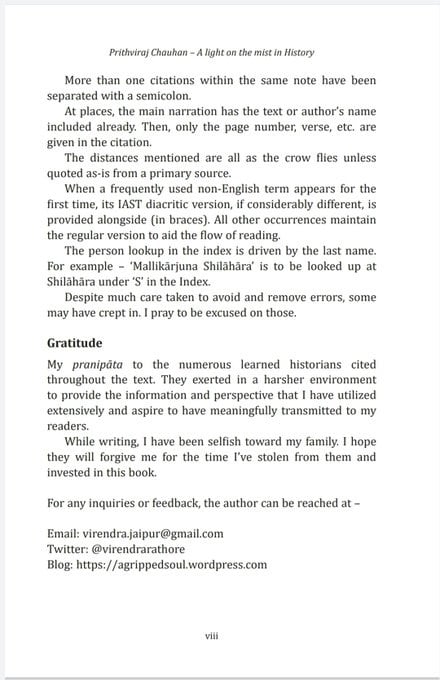 Well done, Virendra! Its always been a pleasure reading your well researched posts here and I'm sure the book will reflect your meticulous attention to details and facts. I ordered my book online.
Top

Thanks tsarkar!
I hope it meets your expectations.
Top

Hi Virendra,
Unable to purchase the Kindle version from the US.
Top

Srutayus wrote:Hi Virendra,
Unable to purchase the Kindle version from the US.

Hi Srutayus,
Please go to amazon.com on browser and lookup the Kindle edition. It is downloadable from there.

If any of you guys finishes reading the book. You're most welcome to pen a no holds barred review on social media or blogs.

Virendra will get the book and read.
Lots of myths around Prithviraj Chauhan.
Top

ramana wrote:Virendra will get the book and read.
Lots of myths around Prithviraj Chauhan.

Sure Ramana. When you're done, feel free to write a no holds barred review at the platform of your choosing - Amazon, social media etc.

Finished reading your book. As someone who loves facts over fiction, I really liked the way you went through multiple sources and discussed the merits of each source before finally settling on your analysis.

Some additional things I would have liked were -

1. Map of the second invasion like the first one
2. Photos of the various plates, pillars & inscriptions referred in your book.
3. More details on Hariraja and Govindraja IV after the death of Prithviraj. That would have given a sense of continuity.
4. Who was the mother of Govindraja IV?
5. What really happened to Prithviraj between Tarain 1 & 2 that changed a dynamic go getter to a lackluster performance.
6. I find Vigraharaja IV's exploits far more impressive than Prithviraj III's. Why is he less popular than P3?
7. More details on Govindraja Tomar of Delhi. He seems to be a great general in both battles
8. Some more on the rescue attempt by Udayraja Gauda
9. Where were Udayraja Gauda and Skanda?

Lastly to answer the following questions -
1. Why P3 defeated Paramardi but didnt capture territory?
2. Why P3 defeated Ghori but let him go on payment of ransom?
3. Why P3's neighbours were generally antagonistic?

One can find the answers in the Marathas.

The Chauhan territories were arid not supporting agriculture and in the absence of trade, revenue came from tribute. The Marathas mounted raids for Chauth. That made them very unpopular with other people.

P3's battles with Paramardi and Chalukyas were primarily tribute driven than for territorial acquisition like the Maratha Chauth raids. And needless to say, the tribute raids made P3 unpopular with his neighbours.

Similarly I speculate the ranson money paid by Ghori was seen as more valuable than killing him. Anyways killing would have not have any long term effect given that other adventurer generals like Aibak or Iltutmish were anyways biding their time.

Aurangzeb's killing of Sambhaji has zero effect in neutralizing the Maratha confederacy given that Santaji, Dhanaji, etc continued to fight the Mughals.

In that light, Prithviraj decided to ransom Ghori rather than kill him. Similarly Ghori too kept Prithviraj alive initially given that the Turks would have lacked manpower to rule Ajmer and Chauhan state. A client ruler would have generated more revenue for them. They installed Govindraja IV on the throne for the same reason.
Top

Personally I am very happy you covered the military aspects of Tarain 1 & 2 in proper detail.

You are absolutely right in pointing out that Indians were better in melee battle while the Turks & Afghans in maneuver battle. Much later Portuguese and British emphasize this point of avoiding melee and engaging in the distance using cannons and muskets. They advise retreat instead of melee if the enemy comes close.

You covered the difficulties in breeding and maintaining horses in India. My good friend Col. Jhala of Remount & Veterinary Corps Center at Saharanpur will attest to this. The British overcame this with their thoroughbred horses that combined performance with hardiness to Indian subcontinental conditions.

As sweet revenge, horses bred in India and Indian Cavalry men defeated the Turks in WW1 in Islamic Heartlands of Palestine.

Col Jhala headed the RVC Center at Saharanpur that bred thoroughbreds in large numbers until the turn of the century when mechanization and aircraft made horses totally obsolete.
Top
Post Reply
2455 posts